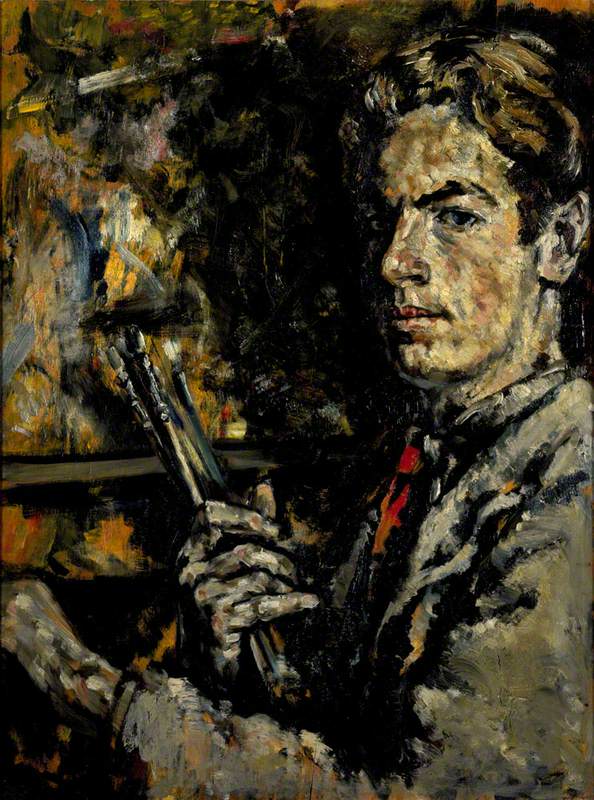 Self Portrait with Brushes 1937

British painter, graphic artist, poet, musician, silversmith, and jeweller, born at Grangemouth, Stirlingshire, son of a painter and etcher. Davie studied at Edinburgh College of Art, 1937–40, and after serving in the Royal Artillery, 1941–6, had his first one-man show at Grant's Bookshop, Edinburgh, in 1946. He then briefly worked as a professional jazz musician (he plays several instruments) before spending almost a year (1948–9) travelling in Europe. This gave him the chance to see works by Jackson *Pollock and other American painters in Peggy *Guggenheim's gallery in Venice, and he was one of the first British painters to be affected by *Abstract Expressionism. Other influences on his eclectic but extremely personal style are African sculpture and Zen Buddhism.

Read more
His work is full of images suggestive of magic or mythology (some based on ancient forms, some of his own invention) and he uses these as themes around which—like a jazz musician—he spontaneously develops variations in exuberant colour and brushwork: ‘Although every work of mine must inevitably bear the stamp of my own personality, I feel that each one must, to be satisfactory, be a new revelation of something hitherto unknown to me, and I consider this evocation of the unknown to be the true function of any art.’ After his return to Britain in 1949, Davie settled in London, where he worked until 1953 as a jeweller. By the mid-1950s, however, he was gaining a considerable reputation as a painter (he has had regular one-man exhibitions at *Gimpel Fils Gallery since 1950), and in the 1960s this became international. His many awards have included the prize for the best foreign painter at the São Paulo *Bienal of 1963 and first prize at the International Graphics Exhibition, Cracow, in 1966. Retrospectives were held at the Barbican Art Gallery, London (1993), and Tate St Ives (2003). Since 1971 he has spent much of his time on the island of St Lucia and this has introduced Caribbean influences into his imagery. Further Reading A. Patrizio and S. D. McElroy, Alan Davie: Jingling Space (2003)

Oxford Dictionary of National Biography
Biography on Oxford Art Online
Painter, born in Grangemouth, Stirlingshire. His father was also an artist and Davie junior was encouraged to enrol at Edinburgh College of Art, 1937-40, where he was taught by John Maxwell. Following army service with the Royal Artillery in World War II, Davie worked variously as a jazz musician, textile designer, potter and as a jewellery designer. In 1946, he held his first solo exhibition at Grant's Bookshop, Edinburgh and soon after travelled around Europe meeting Peggy Guggenheim which was to broaden his artistic outlook. His work over the years was much influenced by Abstract Expressionism, Oriental mysticism and Indian mythology. His first London show took place at Gimpel Fils, London in 1950 and his first New York exhibition at the Catherine Viviano Gallery, New York in 1956. During the 1960's and later many of Davie's drawings appeared in print form executed by the Curwen Press and also were seen in the eclectic magazine Motif.

Davie was awarded the Gregory Fellowship at Leeds University 1957-59 and in 1962 he held a retrospective exhibition in Amsterdam at the Stedelijk Museum. Other retrospective exhibition venues include the McLellan Galleries, Glasgow, 1992, RWA Bristol, 1992, Barbican Art Gallery, London, 1993 and 'Jingling Space' held at Tate St. Ives. This highlighted Davie’s works from the 1930’s to the millennium.

Examples of his work are in the collections of the City Arts Centre, Fleming Collection, Harrogate Art Gallery, Jerwood Foundation, Lillie Art Gallery, MoMa, New York, Peterborough Museum & Art Gallery, Tate Gallery, Towner Art Gallery, Ulster Museum, University of Warwick Art Collection, V&A, Worcester Art Gallery and major museums around the world including MoMA, New York. Alan Davies was appointed CBE in 1972, a senior member of the RA in 2012 and a major exhibition of his work opened at the Tate Britain a few days after his death.