This sculpture trail is organised in chronological order, and highlights some of the fascinating characters and places that have transformed Brighton from the small fishing village of Brighthelmstone into Royal residence, bustling, important city, and popular seaside holiday destination.

The trail is easily walked and you will see many of Brighton’s famous buildings and attractions along the way. 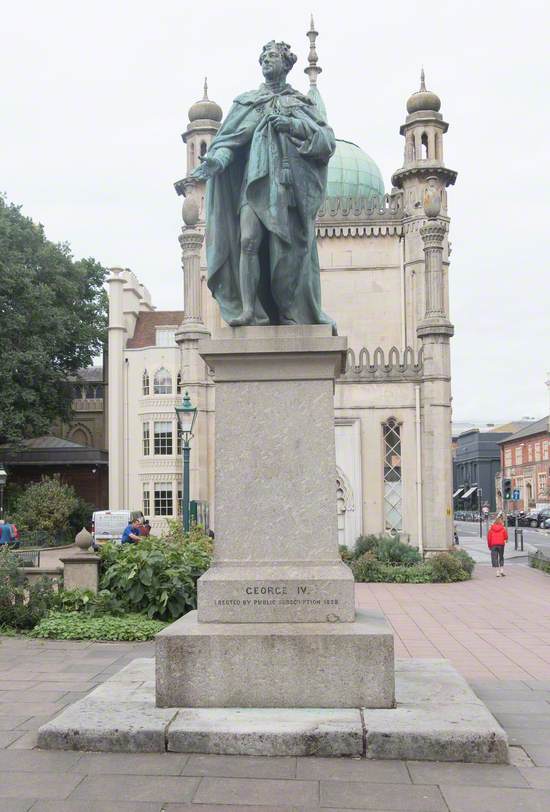 George IV visited Brighton for the first time in 1786. Leasing ‘Marine Pavilion’ in 1793, he began a lavish development of the property, commissioning the architect John Nash in 1815 to complete the Royal Pavilion as we see it today. Affectionately known as ‘Prinnie’, he was known for his debauched and extravagant lifestyle, in stark contrast to his father, known as ‘Farmer George’. His contribution to Regency Style was enormous though. Queen Victoria hated the Royal Pavilion and sold it to Brighton Corporation. By 1907, it was described by the Fortnightly Review as: That awful Pavilion…has now the shabby, worn-out appearance of an old, impecunious rake who drinks gin in place of the champagne of his youth…It exhales mildew and mustiness. 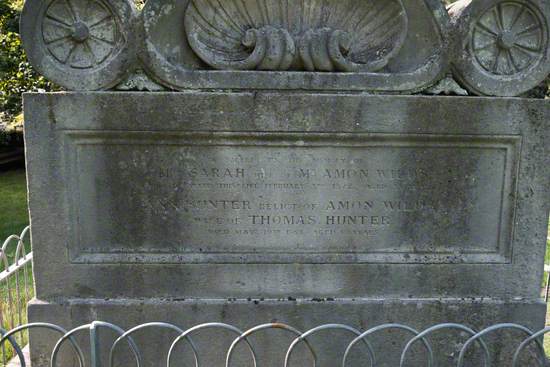 In 1806 Amon Wilds, and his son Amon Henry, established a building firm in Lewes, later moving to Brighton in 1815; the year that John Nash began work on the Royal Pavilion. They were joined by another partner in 1822, Charles Busby. The three were responsible for most of the architecture in the Kemptown and Brunswick areas, as well as other buildings in Brighton. The tomb features the iconic carved ammonite, a motif incorporated in much of their architectural design as a pun on their names. Interestingly, one of the first buildings where they used the motif was Castle Place in Lewes, which later became the home of palaeontologist, Dr Gideon Mantell. As you walk around Brighton you will see many buildings that feature this design element. 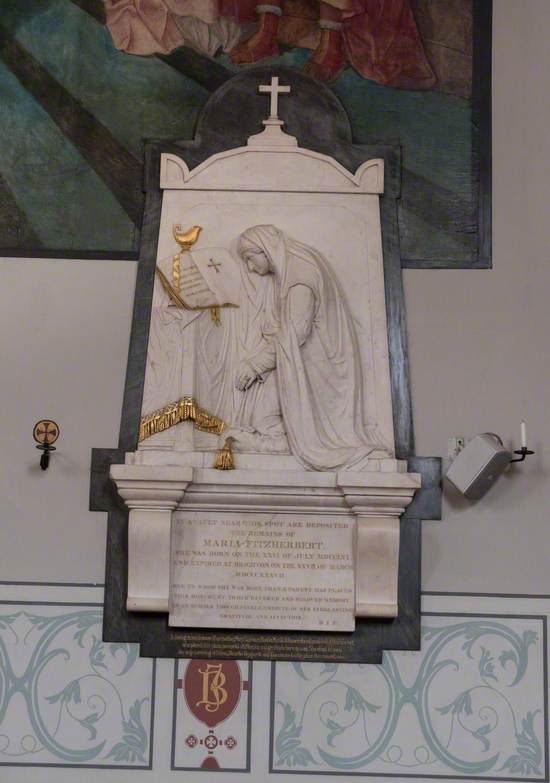 When just 21, George IV fell deeply in love with Maria Fitzherbert, six years older, twice widowed, and a Roman Catholic. Because of this, a marriage between them would never have been tolerated by George III, so they married secretly in 1785. Legally, the marriage was void, but Mrs Fitzherbert always insisted that the marriage was valid ‘in the eyes of God’, even though she agreed to keep it secret, and despite ‘Prinnie’ later abandoning her. She died at Steine House, on Old Steine in 1837, seven years after him. The monument shows Mrs Fitzherbert as a widow, with the Lamp of Memory, assuming the form either of Fidelity or Religion, and kneeling before the broken gospels. She is wearing three wedding rings, one for each of her three husbands

Memorial to the Duke of Wellington

A duke and a famous cross-dresser

St Nicholas of Myra is the ancient mother church of Brighton, and is the town’s oldest surviving building. Arthur Wellesley, 1st Duke of Wellington, worshipped there as a child in the 1780s. An accomplished military figure, Wellington served twice as Prime Minister but is mostly lauded for his victory against Napoleon at Waterloo in 1815. By the time of his death in 1852, the church had become dilapidated so, using the historical connection, a fund was started to rebuild it as a memorial to the Duke, including the Eleanor Cross styled monument inside. The churchyard famously also contains the grave of Phoebe Hessel, who disguised herself as a man in order to join the army and be with her lover. Hessel served as a man for many years. 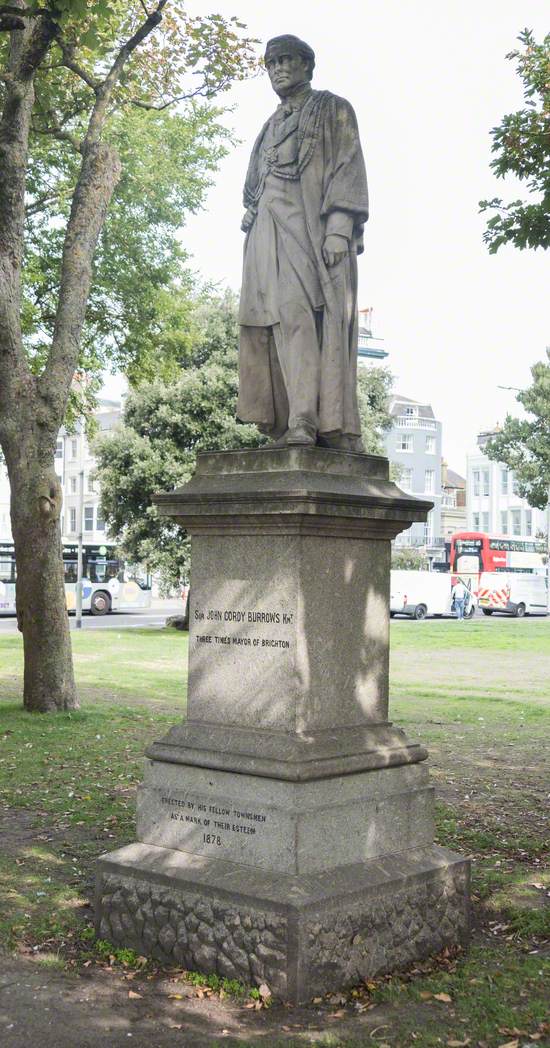 John Cordy Burrows was originally a surgeon and lived and practised in Brighton from 1837. He was elected an Alderman to the first Borough Council in 1854, then Mayor in 1857, 1858 and 1871. He was also responsible for the selecting the town’s motto, ‘In Deo Fidemus’. A popular philanthropist he co-founded the Literary and Scientific Institution; founded the Working Men’s Institute, the Museum, Library and Picture Gallery, the Aquarium, and the Children’s Hospital. He also initiated plans for the Steine Fountain. Burrows was knighted in 1873. The unveiling of the statue was accompanied by a specially composed ode, performed by the Brighton Sacred Harmonic Society who had also carried out Sir John’s wish that they should sing over his grave. 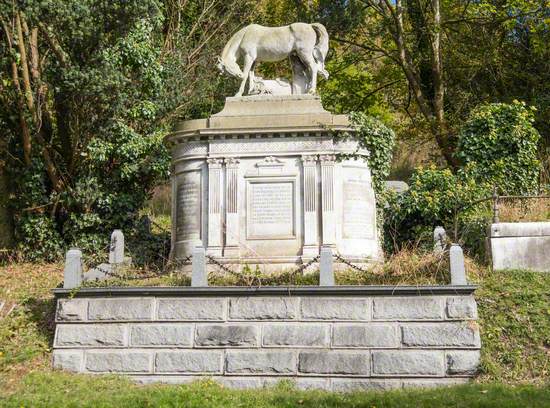 ‘Roll up, roll up, for the greatest show on Earth!’

John Frederick Ginnet gave his first performance in Brighton, as a child, for William IV and Queen Charlotte. Billed as the ‘Infant Ginnet’, he was later regarded as one of the best horsemen in the circus industry. Ginnet moved to Brighton permanently around 1876. His son, Louis, later taught at Brighton College of Art in Grand Parade. Ginnet also built several permanent circus buildings in the town. The Circus Ginnet disbanded in the 1940s but around 20 years ago it was revived, and his descendants continue to work the circus today. The Extra-Mural Cemetery, opened in 1857, holds many monumental tombs of key figures important to the history of Brighton. There can be few tombs anywhere, though, that feature a full-size horse! 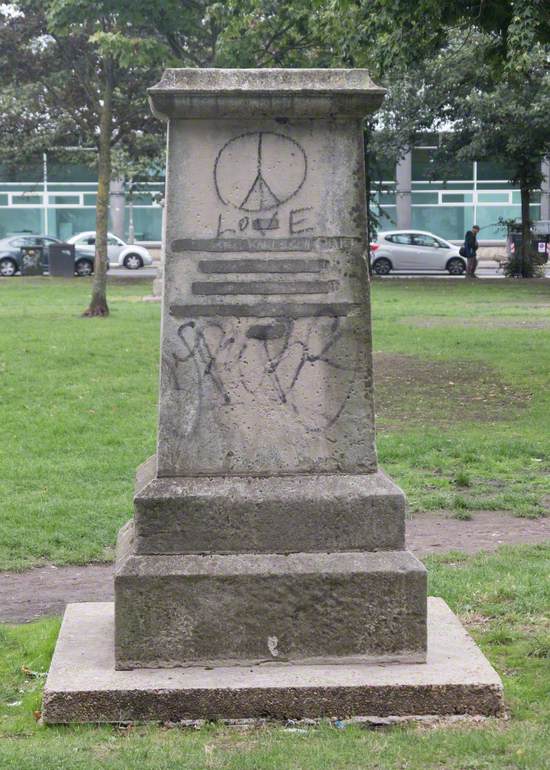 The Randlord and the missing statues

These two featureless, empty plinths belie their original importance. Once five in number, they were surmounted by eight-foot high, ornate allegorical representations of: 'Morning', 'Welcome', 'Fidelity', 'Truth' and 'Night'. The plinths were each inscribed. The statues were removed around 1924 but their fate is unknown. They were presented to the town in 1897 by Sir Edward Albert Sassoon, a highly influential Brighton resident. The statues came from his Mayfair mansion that had previously been owned by 'Randlord', Barney Barnato, who had died in suspicious circumstances. An anecdote has it that when the statues were first unveiled at the Mayfair mansion, the public joked that they were the petrified effigies of Barnato's creditors. 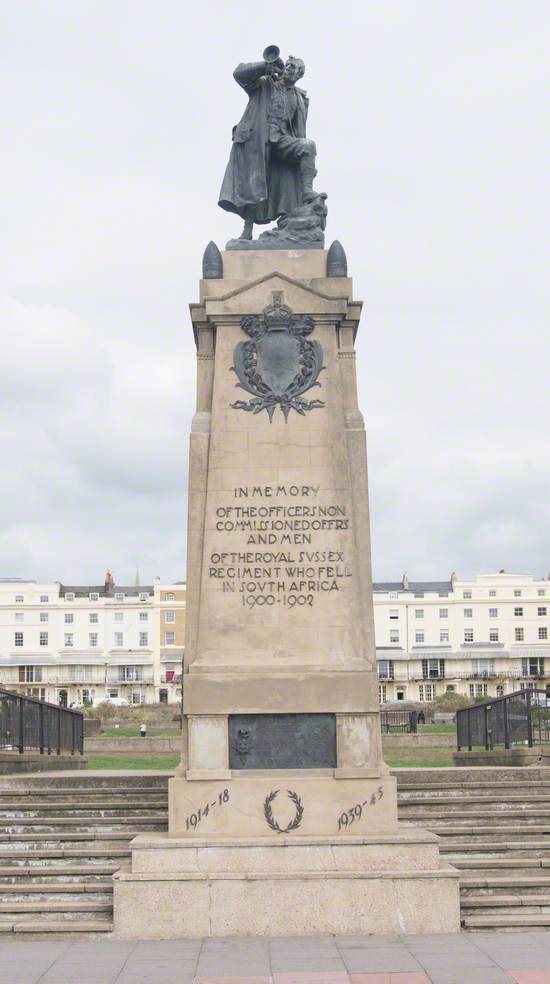 The magnificent war memorial in Regency Square was erected to commemorate the 152 soldiers of the Royal Sussex Regiment who died between 1900 and 1902 in the Boer War. The bronze statue, modelled on a sergeant sounding the charge, is actually based on a real incident that took place during the South African campaign at Doornkop. The National Army Museum has, in its collection, a maquette for the statue by Hartwell. The memorial now faces the British Airways i360, a 162-metre observation tower. 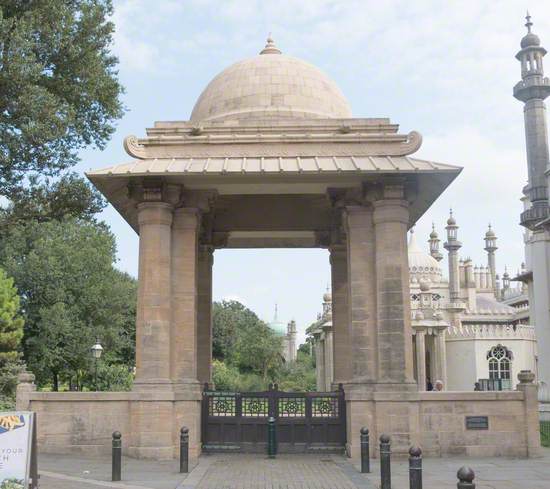 A First World War hospital and an annual place of pilgrimage

During the First World War, the magnificent Royal Pavilion was used as a hospital where thousands of injured soldiers from the Indian army convalesced. This gateway was given in thanks by the people of India and is dedicated to the inhabitants of Brighton. It was unveiled by the Maharaja of Patiala in 1921 and is in the style of sixteenth-century Gujerati buildings. Just outside Brighton stands the Chattri Memorial in memory of all Indian soldiers who died during the conflict, but particularly associated with the 53 Hindu and Sikh soldiers who died in Brighton and whose remains were cremated at this spot. There is an annual pilgrimage to the site on the second Sunday in June. On a fine day, the walk across the South Downs to this beautiful memorial is wonderful. 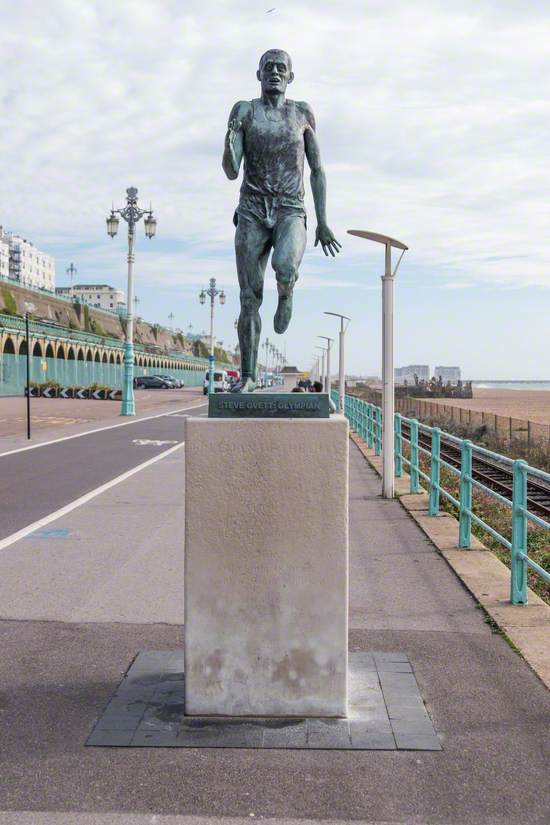 An Olympic champion and the metal thieves

Brighton has always been home to celebrities and sportsmen. The runner, Steve Ovett, was born and lived in the town. He competed in three Olympic Games and was the mile world-record holder several times. Many will be unaware that this statue on the seafront is not, in fact, the original. Erected in 1987, the first Ovett statue stood in Preston Park, where Ovett trained. At the time, it was the most expensive public sculpture in Brighton, costing private sponsors £25,000. Sawn off at the foot and stolen in September 2007, it was broken up into pieces by the thieves in an attempt to melt it down for scrap. There was no available mould to cast a replacement so a new statue was commissioned and placed in this more prominent position. 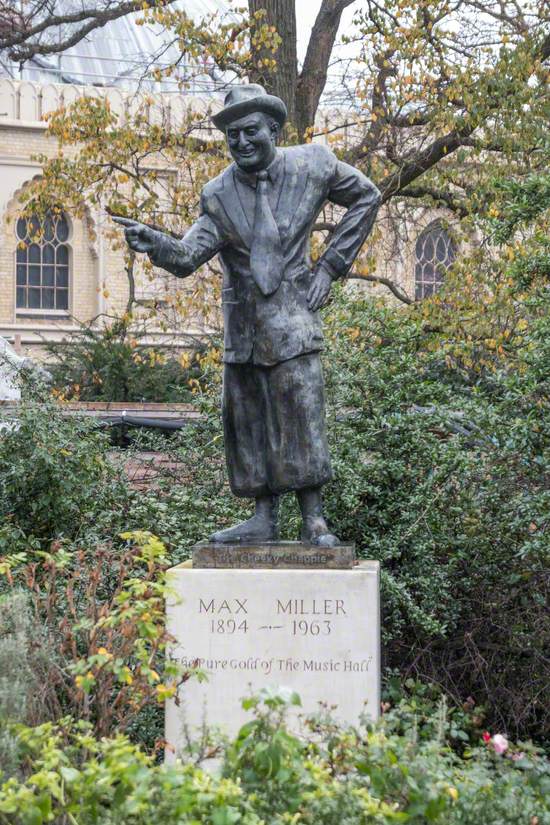 ‘The Cheeky Chappie’ and his two books

Max Miller was born in Brighton and lived on Marine Parade in the town for many years. He was Britain’s top comedian from the 1930s to the 1950s. The statue depicts him wearing his trade-mark stage clothing and hat and, at the base of the statue, are quotes from his stage patter and his 'blue book, and white book'. Miller started as a song and dance man on Brighton seafront. His act was risqué and filled with double entendres. Miller always appeared on stage in a flower-patterned suit, plus fours, correspondent shoes, and a trilby. His famous signature tune became 'Mary from the Dairy'. Because of the content of his act, Miller was regularly banned from the BBC airwaves but commented 'I much prefer a retired bus driver to anybody in show business'. 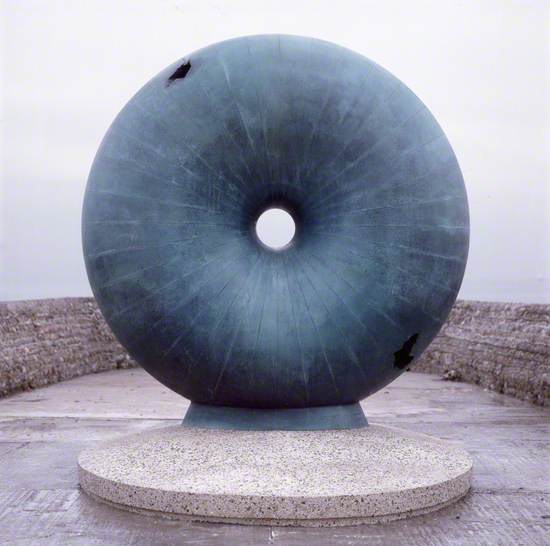 Brighton has several magnificent pieces of modern sculpture, but this piece has become a favourite of both locals and visitors, and is affectionately known as the ‘Donut’. The form of the sculpture was imagined by pressing the north and south poles of a globe together to form a ‘torus’. If you look closely at the surface, you can see the outlines of the major continents fashioned into the bronze. The sculpture has become a very popular meeting point and is probably one of the most photographed objects in Brighton. Living and working in East Sussex, the sculptor is well known locally. 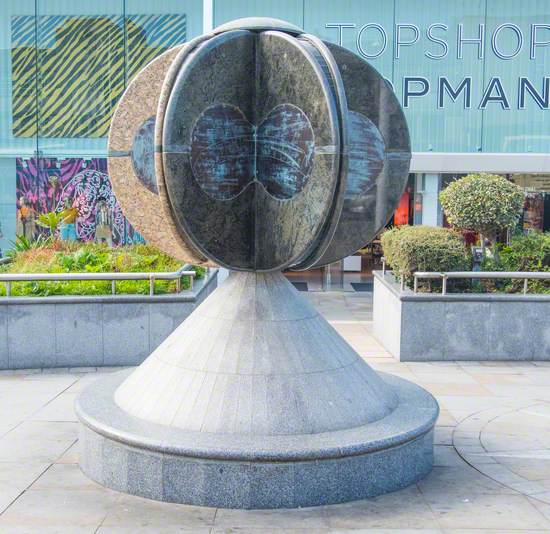 Charlie Hooker (b.1953) and Capital Marble and Greek Marble

Another of Brighton’s iconic landmarks, ‘Twins’, was created by Charlie Hooker, Professor of Sculpture at the University of Brighton. The sculpture was made specifically for Churchill Square, Brighton’s main shopping centre. An incredibly complex and innovative sculpture, it is an interactive work. Go close up to the spheres and hear the sounds they create through digital technology and the passage of the sun. The images on the etched bronze plates, forming the surfaces, are derived from weather patterns that were recorded during the construction of the sculpture. The sounds you hear coming out of the spheres are a mixture of sample sounds recorded around Brighton, affected by computer technology that is controlled by these graphs.

View all 20
View all