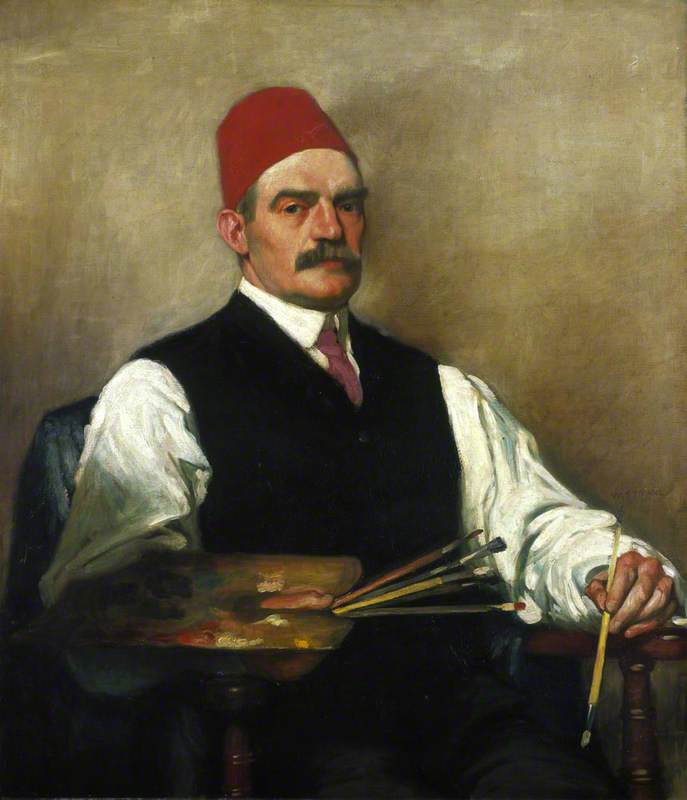 British painter, etcher, and draughtsman. He was born in Dumbarton, where he was briefly apprenticed to a shipbuilding firm before moving to London (he lived there for the rest of his life) and studying at the *Slade School, 1876–80. Under the guidance of Alphonse *Legros he took up etching and it was in this field that he originally made a name for himself. By the mid-1890s he had an international reputation, but from this time he turned increasingly to painting, and after the turn of the century he was regarded more as a painter-etcher than an etcher-painter. At first he concentrated on imaginative (often allegorical) scenes in a pseudo-Venetian manner influenced by his friends *Ricketts and *Shannon, but he came to specialize mainly in portraits—one of the most striking examples is Lady with a Red Hat (1918, Kelvingrove Art Gallery, Glasgow), in which the sitter is the writer Vita Sackville-West.

Read more
He made highly finished portrait drawings as well as paintings and etchings. Strang also painted some rather strange modern allegories, combining ‘real’ and ‘dressed-up’ figures, but he is now probably best remembered for a much more modest genre scene, Bank Holiday (1912, Tate), a memorable piece of social observation showing a handsome but awkward young couple making an outing to a restaurant. Strang's work was unfashionable for many years after his death, but an exhibition devoted to him in 1981 (shown at the Graves Art Gallery, Sheffield, the Kelvingrove Art Gallery, Glasgow, and the NPG, London) did much to put him back on the map. His son Ian Strang (1886–1952) was an etcher, draughtsman, and painter, mainly of architectural and landscape subjects. He wrote The Student's Book of Etching (1938). Another son, David Strang (1887–1967), was a painter and etcher.