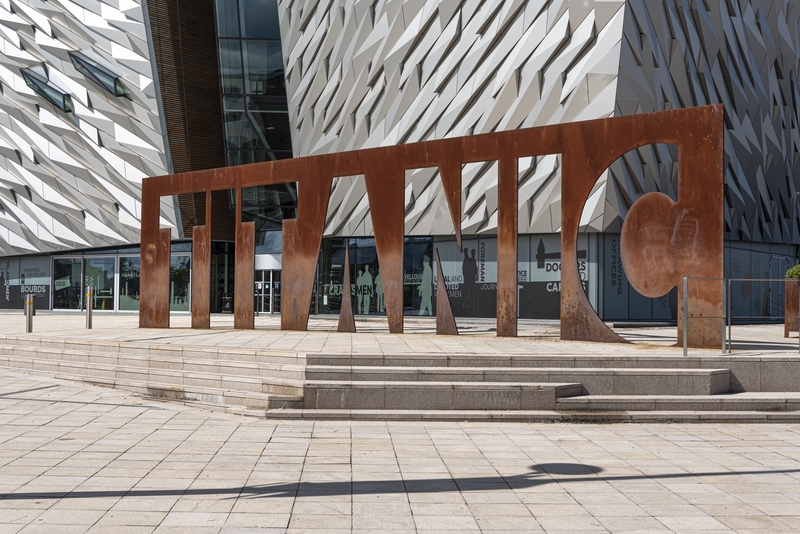 Titanic Sign stands on the site of a Belfast shipyard as a reminder to visitors that Titanic was built here. How can sculpture help us remember something that is lost?

This resource provides a little contextual information to Titanic Sign; some open-ended discussion questions for this and other sculptures, including a war memorial; and a practical activity creating negative space artworks incorporating words. It can be used to:

This art and design and history resource offers a series of activities that can be used together as a lesson plan or as individual components to integrate into your own scheme of work.

Art and design
- Be stimulated and inspired by other artists
- Design and make three-dimensional objects for a variety of purposes
- Apply the elements of the visual, tactile and sensory language of art

Art and design
– I have the opportunity to choose and explore an extended range of media and technologies to create images and objects, comparing and combining them for specific tasks (EXA 2-02a)
– I can create and present work that shows developing skill in using the visual elements and concepts (EXA 2-03a)
– Inspired by a range of stimuli, I can express and communicate my ideas, thoughts and feelings through activities within art and design (EXA 2-05a)
– I can respond to the work of artists and designers by discussing my thoughts and feelings. I can give and accept constructive comment on my own and others’ work (EXA 2-07a)

History
- An aspect in history that extends beyond 1066

RMS Titanic was an ocean liner that struck an iceberg and sank during its first voyage across the Atlantic ocean in 1912. Titanic was one of many ships constructed in the Harland & Wolff shipyard in Belfast; there are photos on Art UK.

The Harland & Wolff shipyard has since been redeveloped and part has been renamed Titanic Plaza.

In 2012, the Titanic Belfast visitor attraction opened at Titanic Plaza. Created as a monument to Belfast's shipbuilding history, the building's design represents ships' hulls and ice crystals. Outside the entrance stands a sculptural sign spelling out 'TITANIC', designed by the building's architects.

The sculpture uses steel of the same thickness as the hull of the ship Titanic and weighs 16 tons, the weight of Titanic's anchor. At 4.5 metres tall and 14.5 metres long, the sculpture is the same height and width as the private promenade decks used by Titanic's first-class passengers.

Sculptures that help us remember

As Titanic Sign helps us remember the ship that sank and the shipyard where it was built, other sculptures around the UK help us to remember other people and things that are lost to us. Perhaps there is a sculpture like this, or a memorial, near you. Below are some examples to discuss. 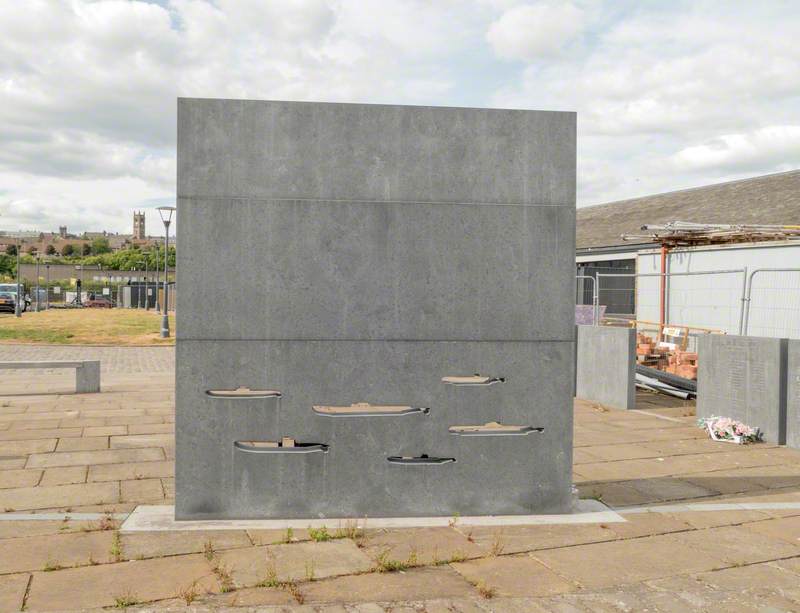 Paul Grime (b.1956) and Jeremy Cunningham

This sculpture is located at Dundee harbour. The shapes cut out of the stone remember six submarines that were lost during the Second World War. The submarines operated out of Dundee, and the submariners who crewed them had families and friends there. 296 submariners' names are carved on separate stone panels. 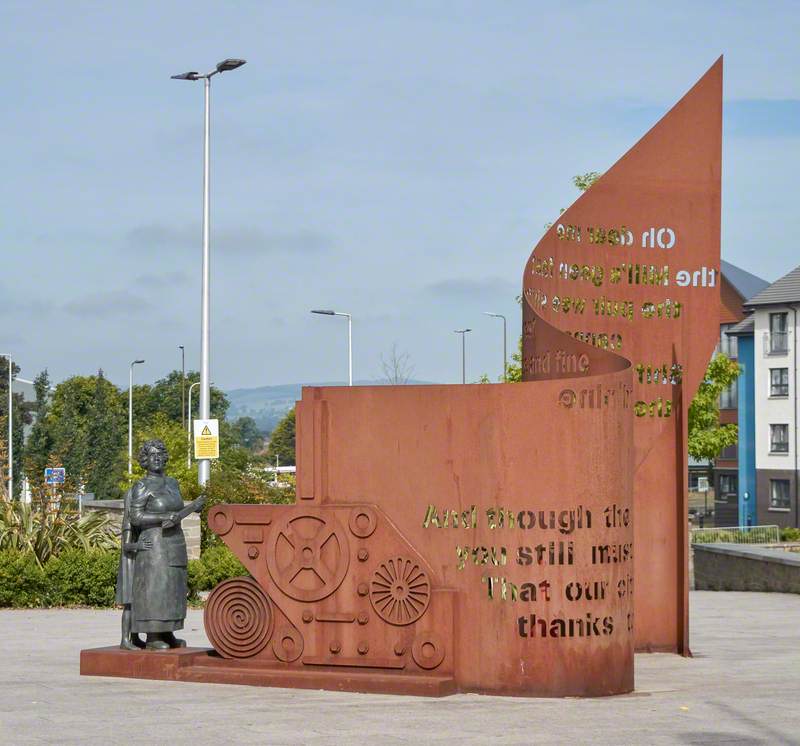 Dundee used to be famous for its jute factories where women and children worked, turning jute shipped in from India into cloth for bags and sacks. Now, the jute industry has gone. Stella Carrington used to be a jute worker and still lives in Dundee. The Jute Women sculpture was Stella's idea, and the artist based the main figure on her. The sculpture includes a curved sheet of steel that represents jute cloth. Cut into it is a verse from Mary Brooksbank's song about hard work in the factories, and lines from a poem celebrating weavers by Ron Hutcheson. 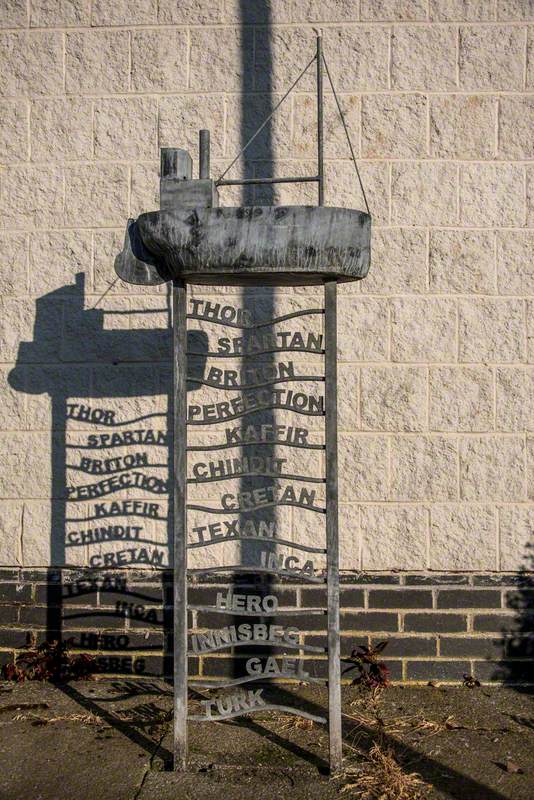 This sculpture remembers small steamboats called puffers that used to transport supplies to the Scottish islands, but are no longer used.

100 puffers were built in Kirkintilloch, where this sculpture stands, but the shipyard that built them has gone. The sculpture includes the names of several puffers.

Ask your students to choose a single word to turn into an artwork that spells out something of importance to them – a place, an object, a person or even an idea.

If it is appropriate for your students, their chosen words can refer to change or loss they have experienced. For example, a home they have moved away from, a school they have moved on from, a possession they have lost, or something they have outgrown.

Once they have chosen their words, students might like to practice writing them out in large, chunky letters, experiment with lettering, and double-check their spelling too.

Some students may want to draw out their word before they transfer it to the card. They will also need:

Working landscape, students should mark out a gap at the bottom of the piece of card of around 10 cm, or more if bigger than A4. They can then fold along this edge. This is the base from which their sculpture will stand.

With a pencil and ruler, students should measure and mark out the letters that make up their word above this folded edge. There should be space between letters and the edges (as with Titanic Sign). Once it is marked out, students can cut out the letters, leaving a negative space.

They could prop up their artwork in front of the place, object or person it is about, or overlay their artwork on top of an image (printed or on-screen), and take a picture.

Ask your students to draw a design for a public sculpture featuring more words. Give them the freedom to choose the text they wish to feature in their work, but ask them to choose something that links to their first artwork. They could source the text from a famous quote, an excerpt from a song, poem or story.

Students can experiment further with negative space, choosing objects to cut from card, considering size, spacing and placement of the objects.

Task your students with researching artworks or monuments in your locality that commemorate a local change or loss.

Not all sculptures that remember loss or change use words, or negative space. Investigate and discuss other artworks that remember other losses, in different ways.