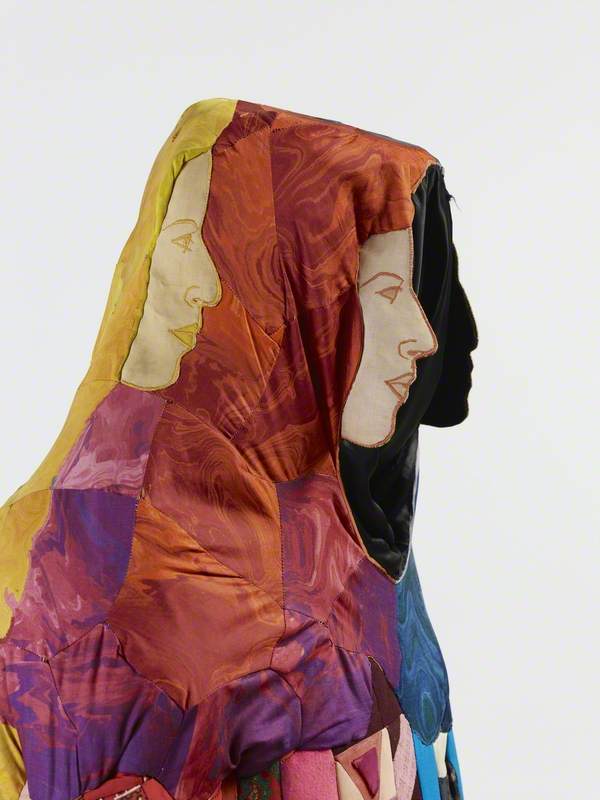 How and why are textiles used in art?

This resource focuses on a textile artwork by American sculptor Jann Haworth and a small selection of other artists who incorporate textiles in their work. It considers the visibility of women artists and the role of textiles in art, including gender associations and stereotypes.

There are two suggested creative activities, one inspired by female artists who repurpose textiles in their work, and another using wool inspired by the practice of male sculptor Brendan Jamison who uses textiles to play with gender assumptions.

These activities, artworks and questions can be used to:

This Art and Design resource offers a series of activities that can be used together as a lesson plan or as individual components to adapt and integrate into your own scheme of work. It is written for upper Key Stage 2/Level 2 but may also suit Key Stage 3/Level 3.

Art and design
- Be stimulated and inspired by other artists
- Design and make three-dimensional objects for a variety of purposes
- Apply the elements of the visual, tactile and sensory language of art

Jann Haworth is an American artist who has lived and worked in Britain and America. One of only a small number of women creating Pop Art in the 1960s and 1970s, she became a leading artist in the British Pop Art movement.

Jann Howarth studied at the Slade School of Art in London during the 1960s. While she was studying, comments from her teachers made it clear to her that women studying art were being judged by the way they looked, not by their art, and that their work was not being taken seriously. This sexist attitude annoyed her, and made her determined to be better than the male students.

She shifted towards working with textiles, using the sewing skills she had learnt as a child from her mother. She said that textiles 'was a female language to which the male students didn't have access.' This use of cloth, thread, latex and sequins led to her becoming a pioneer of soft sculpture.

Students from Gomersal Primary School wanted to find out more about female artists, and made this film about Jann Haworth's sculpture Calendula's Cloak.

What questions would you ask?

Sewing has historically been seen as a task for women and girls, often a hobby for rich women, and a job for less wealthy women.

Looking at the images that come up when you search for 'sewing' on Art UK can bring up some interesting talking points. Here are some questions you might like to discuss.

Two more women artists who work with fabric are Solveigh Goett and Ruth Spaak. They both create collage artworks that combine bright colours and interesting textures, like Calendula's Cloak. However, their artworks reuse old textiles.

Ruth Spaak likes to reuse fabrics in unexpected ways. She hunts around car boot sales to find materials to work with and is fascinated by the stories behind things other people have owned. She takes the things she finds apart and combines them to create complex sculptures.

Solveigh Goett is interested in the memories that can be triggered by the textiles around us, things like baby blankets, pyjamas, school uniform, and curtains. Although these are ordinary, everyday things everyone knows, they can become very special to us, and become part of who we are. Solveigh Goett thinks about this as she makes her sculptures from textiles she has collected.

Look a little closer at the work of these artists.

Yinka Shonibare uses bright, colourful textiles in his sculptures. The African fabrics he uses connect his artwork to ideas about Britain's multicultural society, and the long history between Britain and Africa.

In this video Yinka Shonibare talks about colour in his artwork:

Brendan Jamison is another male artist who uses textiles in his work. He has made a series of sculptures in which he goes against stereotypes attached to objects viewed as tough, heavy and masculine by softening them in a coating of bright colourful wool. Brendan made a film about one of these sculptures, Yellow Helicopter.

Firstly, encourage students to play around with different shapes and cuts of fabric in a variety of combinations on a flat surface to see how the colours and textures correlate with each other.

Remind them of the textile artworks they have seen and ask them to think about the stories, ideas, memories, people or parts of their own identities they want their artwork to connect to. They could communicate this through the colours they use, the patterns, shapes or pictures they create, the textures they combine, and the parts of the garment they embellish their artwork with (such as buttons, zips or ribbons).

Once students have decided on their combination and layout, they can attach it to the cardboard by using a light layer of PVA glue. Any material that overhangs the edges of the cardboard can be stapled to the back to secure it more tightly in place.

Watch part two of Brendan Jamison's film, during which Brendan demonstrates how to make a wool sculpture in his signature style.

Task students with working in groups of two or three to create a small wool sculpture using a twig or branch.

Each small group will need:

How to make your wool sculpture

For a more elaborate sculpture, as Brendan outlines in the film, students can be supported to cut sections of garden wire to (2 mm thick is easiest to cut and shape) to create a wire structure and then wrap it in wool using the same process as above.

Task your students with exploring and discussing different artworks which use textiles in their production by searching on Art UK using the search term 'textile', or for specific types of textile, for example: