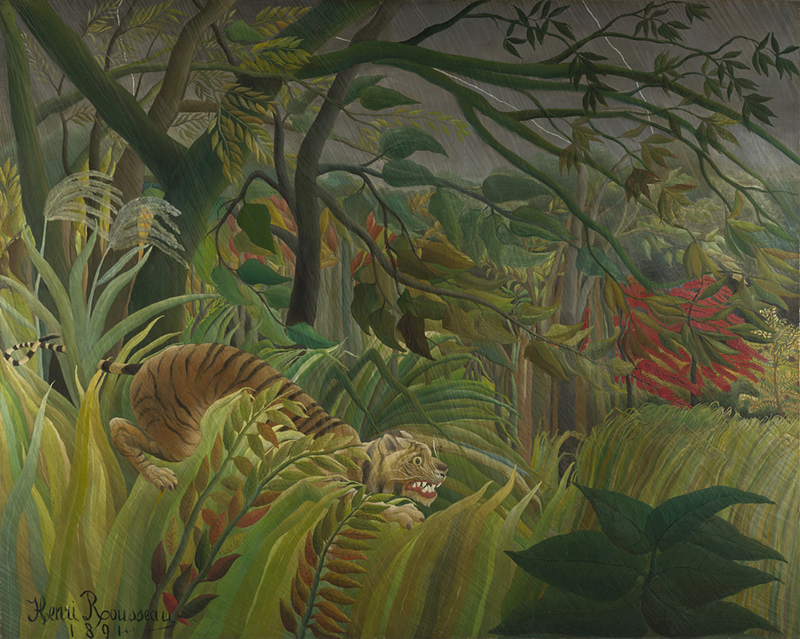 This is the first Superpower of Looking Landscape lesson which focuses on Henri Rousseau's 1891 painting, Surprised!

The following resources complete this category:

You can find out more about The Superpower of Looking including introductory films, teacher guidance and SEND/ASN approach on the Superpower homepage.

This resource is an innovative prototype developed from a successful schools' pilot. Help us develop it further by taking part in our final schools' pilot in early 2022, or get in touch with your feedback via learning@artuk.org

Art and design
- Look at and talk about the work of artists, designers and craftsworkers from their own and other cultures; appreciate methods used in the resource materials and use their appreciation to stimulate personal ideas and engage with informed art making
- Develop their understanding of the visual elements of colour, tone, line, shape, form, space, texture and pattern to communicate their ideas
- Evaluate their own and others’ work and how it was made, explain and share their ideas, discuss difficulties and review and modify work to find solutions

Art and design
- I can create and present work that shows developing skill in using the visual elements and concepts (EXA 2-03a)
- Through observing and recording from my experiences across the curriculum, I can create images and objects which show my awareness and recognition of detail (EXA 2-04a)
- Inspired by a range of stimuli, I can express and communicate my ideas, thoughts and feelings through activities within art and design (EXA 2-05a)
- I can respond to the work of artists and designers by discussing my thoughts and feelings. I can give and accept constructive comment on my own and others' work (EXA 2-07a)

Art and design
- Describe and make comparisons between their own work and that of others
- Experiment with and examine the methods used by other artists from different periods, places and cultures
- Evaluate the methods and results of their own work and that of their fellow pupils
- Pupils should be stimulated and inspired by: other artists; methods and processes; media; styles; ideas
- Explore, experiment with and apply the elements of the visual, tactile and sensory language of art, craft and design which include: line, tone, colour, pattern, texture, shape and form

The landscape category is a broad one that encompasses seascapes, and cityscapes and townscapes too. Historically, the landscape has been associated with scenes of the natural world. Sometimes the landscape is devoid of figures or shows human activity as secondary to the environment. The category has become looser over time and representation can range from topographical accuracy to abstracted, or even abstract, depictions of the land and sea we navigate.

Despite being a famous artist, Rousseau had never had any professional training. Although there is no evidence that he ever left France, he developed his own vision of the world and became famous for his 'jungle paintings'. Rousseau took inspiration for this work, and others like it, from visits to the Botanical Gardens and the Natural History Museum in Paris. In fact, many of the plants featured in Surprised! are super-sized house plants. The imaginative use of common native plants to create an 'exotic' landscape gives a dream-like quality which is typical of his work.

Tip: if you'd like more insight into the painting before teaching the lesson, an audio description is available, which has been developed for students with blindness or visual impairment to take part.

Ask them to describe the tiger and its surrounding landscape.

Don't tell them too much about what the picture represents at this stage. Once you have interpreted an image, or been told what to see, it is difficult to look freshly and critically at it or appreciate each other's views.

For students with blindness or visual impairment, an audio description of the painting is available to be listened to during this stage.

Tip: in class, use the zoom feature on the image below to look closer at details. You can open a full-screen version on The National Gallery's website.

In the following film, artist Bob and Roberta Smith uses his own 'Superpower of Looking' to explore Surprised!

Watch the film with your students and discuss the following questions:

Now we can start to explore the 'elements' of the painting. Use the Superpower Kit to ask questions about the work and spark a discussion.

We’d suggest focusing on the following areas to help your students 'read' the image (click to open the relevant Superpower Kit section):

Ask your students to evidence their points, e.g. where exactly are they looking when they make a statement? Can everybody see what they see?

To support those teaching The Superpower of Looking for the first time, this additional stage can be used when teaching the first lesson in each category.

During this stage, you can introduce knowledge from the context box while asking these bespoke questions on the painting. If you've already covered any questions through previous discussions, feel free to move on.

If it's required, guidance on what to look for can be found below the sets of questions. 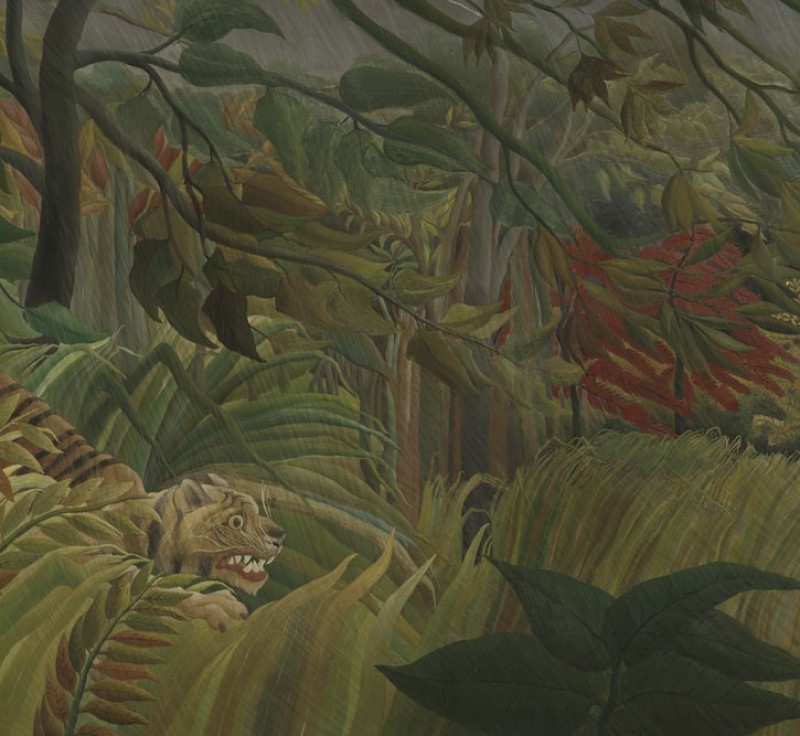 The wind is blowing most things forward on a diagonal, giving the sense that the tiger is about to pounce.

The tiger is outlined and appears quite flat and in profile. The animal is also frozen in time – something is about to happen.

From left to right, we follow the tiger's fixed gaze.

The clutching, claw-like fronds of the leaves are both behind the tiger and above his head.

The composition is cropped and so we sense that lots is going on beyond the picture's plane, including the prey, perhaps?

Moving: rain, leaves and branches; the tiger's tail; its ears are bent back in readiness, its top lip is beginning to curl; its whiskers. Still: the tiger is frozen in a pounce position.

The red of the tiger's mouth is echoed by the fiery red leaves ahead of it.

The foliage is green and the tiger is orange with black stripes.

The many, many greens coupled with the scale of the plants, create the sense of a dense and other-worldly jungle. The reds may symbolise danger, even blood. If your students guessed 'danger', what other red warning signs might they see on the way to school (e.g. traffic lights)?

Red and green are complementary and so together they create maximum impact. Red, white and black are also a striking combination – they often demand our attention.

It is very grey and foreboding. Silver paint is applied almost in a wash diagonally across the canvas to create the effect of rain.

Line is so dominant in this scene that the tiger with his many stripes is almost camouflaged – it's certainly going to be a surprise.

Stripes: the rain, the stripes of the leaves and the tiger's stripes.

Rousseau outlines everything to make the scene look more 2D (flat) than 3D (modelled). The tiger looks like a cardboard cut-out, frozen in profile. Shouldn't those leaves beneath his back leg be bending under the weight of him?

The diagonal lines of the foliage, the fluid line of the tiger's back and tail, and the fine white lines of the rain all point towards the tiger's focus – its prey. While all of the lines in the painting appear to be on a diagonal from left to right, can you spot any lines that move in the opposite direction, right to left? (The tiger's whiskers!)

The fluid line of the tiger's tail seems alive with the excitement of the scene. Does it remind you of another jungle creature?

Ask your students: how interested are they in the image now? Why?

At this point, you may also want to give your students some time to record and review their observations in a sketchbook on their own or in pairs.

Compare Surprised! with either or both of the following options:

Extend into an English lesson by following up with some creative writing.

During its original exhibition, some of the reviews of Surprised! mention prey being hunted, and Rousseau later referred to the painting as 'A Tiger Chasing Explorers'. He is also said to have reworked the canvas, and so potentially he painted over prey. Is that what can be spotted above the grass on the right? What do your students think?

The final version of the painting is open to interpretation – maybe it's the tiger who has been surprised? Task your students with writing about the missing elements of the scene to solve the mystery of who or what is Surprised! Or, if preferred, take inspiration from Oliver Goldsmith Primary in Brent and extend into an Art & Design lesson by tasking your students with drawing what they think is happening beyond the picture frame, like in the following example.

If you haven't already explored climate in class previously, or need to re-cap, watch the following video from BBC Teach and discuss:

Now, show Surprised! to your students again and ask the following:

It may surprise your students to discover that Rousseau never set foot outside of France and his jungle paintings are imaginary. As explained in the context box, the plants he presents in Surprised! are a mix of domestic house plants and tropical plants he could study at the Botanical Gardens in Paris.

Task your students with taking inspiration from another country's geography, climate and/or wildlife and representing this in a collage using recycled materials. You could support this task by watching one of the 'Your World' Geography films on BBC Teach which compare and contrast different locations in Britain with different countries across the world.

The following film from The National Gallery gives a great example of how to create such a collage inspired by Rousseau's painting: