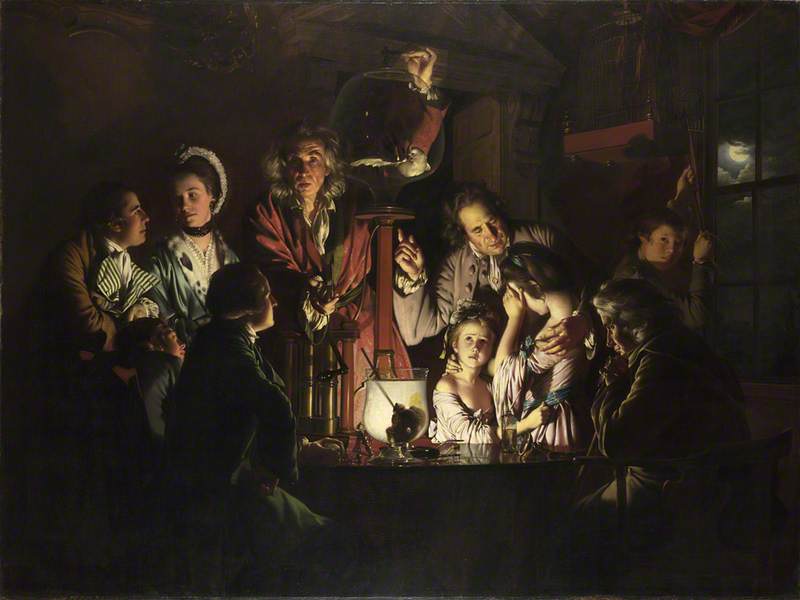 An Experiment on a Bird in the Air Pump 1768

This is the first Superpower of Looking scenes of everyday life lesson which focuses on Joseph Wright of Derby’s 1768 painting, An Experiment on a Bird in the Air Pump.

The following resources complete this category:

You can find out more about The Superpower of Looking including introductory films, teacher guidance and SEND/ASN approach on the Superpower homepage.

This resource is an innovative prototype developed from a successful schools' pilot. Help us develop it further by taking part in our final schools' pilot in early 2022, or get in touch with your feedback via learning@artuk.org

Art and design
- Look at and talk about the work of artists, designers and craftsworkers from their own and other cultures; appreciate methods used in the resource materials and use their appreciation to stimulate personal ideas and engage with informed art making
- Develop their understanding of the visual elements of colour, tone, line, shape, form, space, texture and pattern to communicate their ideas
- Evaluate their own and others’ work and how it was made, explain and share their ideas, discuss difficulties and review and modify work to find solutions

Art and design
- I can create and present work that shows developing skill in using the visual elements and concepts (EXA 2-03a)
- Through observing and recording from my experiences across the curriculum, I can create images and objects which show my awareness and recognition of detail (EXA 2-04a)
- Inspired by a range of stimuli, I can express and communicate my ideas, thoughts and feelings through activities within art and design (EXA 2-05a)
- I can respond to the work of artists and designers by discussing my thoughts and feelings. I can give and accept constructive comment on my own and others' work (EXA 2-07a)

Art and design
- Describe and make comparisons between their own work and that of others
- Experiment with and examine the methods used by other artists from different periods, places and cultures
- Evaluate the methods and results of their own work and that of their fellow pupils
- Pupils should be stimulated and inspired by: other artists; methods and processes; media; styles; ideas
- Explore, experiment with and apply the elements of the visual, tactile and sensory language of art, craft and design which include: line, tone, colour, pattern, texture, shape and form

Scenes of everyday life – also known as 'genre' paintings – usually do the opposite of the History category by focusing on ordinary and unidentifiable people. The image focused on in this lesson, however, stretches this historical understanding a little in presenting a scene somewhat out of the ordinary!

The 'Derby' in Joseph Wright of Derby was probably a sign of the artist's pride in his hometown. Derby was famous for scientific advancement in the service of industry – a bit like Silicon Valley is now. In this age of discovery, entrepreneurs emerged and societies of like-minded people formed. The Lunar Society was one of them, a group of inspirational men who debated science, philosophy, the arts and commerce before travelling back home by moon-lit carriages. This work is Wright's way of sharing scientific ideas with everyone, not just a select few, and showing the reactions of ordinary people.

This is the largest candlelit picture – his speciality – that Wright of Derby painted. The bird is placed in a glass container from which the air is being pumped out. The drama is created by the suspense of not knowing whether the bird will die or whether the experimenter will let the air back in and allow the bird to live.

Tip: if you'd like more insight into the painting before teaching the lesson, an audio description is available, which has been developed for students with blindness or visual impairment to take part.

Ask them to describe the figures and what's going on in the background and around them.

Don't tell them too much about what the picture represents at this stage. Once you have interpreted an image, or been told what to see, it is difficult to look freshly and critically at it or appreciate each other's views.

For students with blindness or visual impairment, an audio description of the painting is available to be listened to during this stage.

Tip: in class, use the zoom feature on the image below to look closer at details. You can open a full-screen version on The National Gallery's website.

In the following film, taxi driver and tour guide Rachel Martin-Peer uses her own 'Superpower of Looking' to explore An Experiment on a Bird in the Air Pump.

Watch the film with your students and discuss the following questions:

Now we can start to explore the 'elements' of the painting. Use the Superpower Kit to ask questions about the work and spark a discussion.

Focus on the following areas to help your students 'read' the image (click to open the relevant Superpower Kit section):

Ask your students to evidence their points, e.g. where exactly are they looking when they make a statement? Can everybody see what they see?

To support those teaching The Superpower of Looking for the first time, this additional stage can be used when teaching the first lesson in each category.

During this stage, you can introduce knowledge from the context box while asking these bespoke questions on the painting. If you’ve already covered any questions through previous discussions, feel free to move on.

If it's required, guidance on what to look for can be found below the sets of questions. 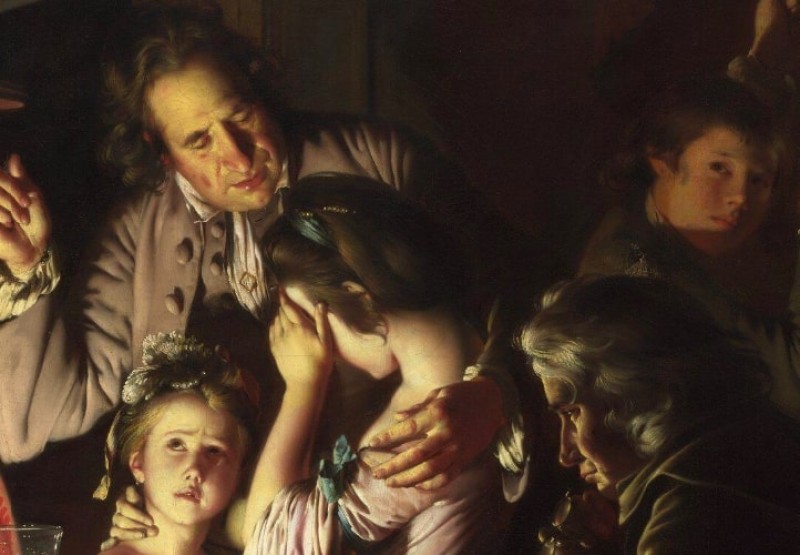 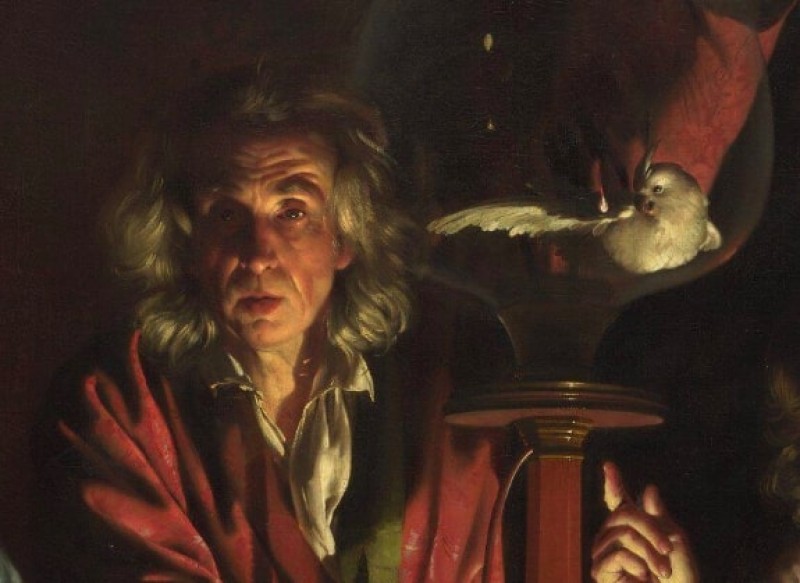 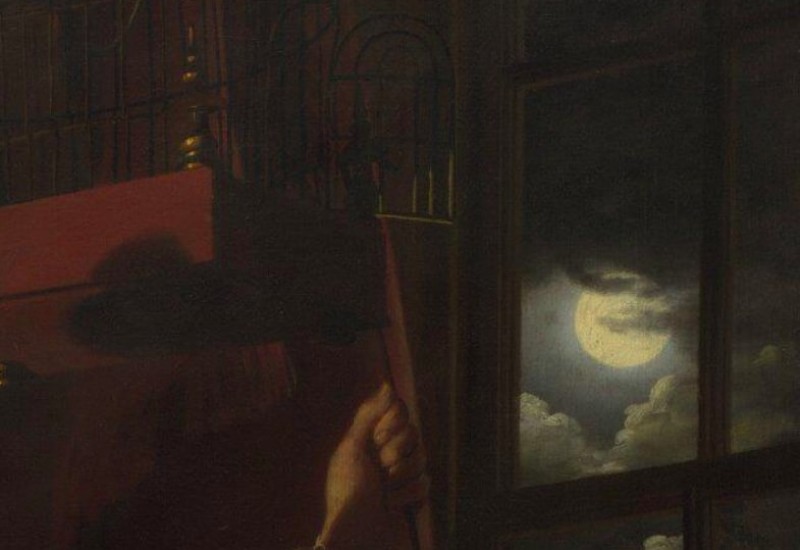 The figures form a pyramid shape with the experimenter (his hand) at the apex.

The whole scene creates a circle.

There is a gap at the front of the table where we might stand. This might suggest we're included in the science lesson too.

The young couple on the left only have eyes for each other. Two small girls are comforted by their father, the eldest turns away in horror, the youngest faces the fate of the bird but has a worried expression. The men around the table look on with varying degrees of interest. Don't forget the young boy with tattered clothes near the moon-lit window: what's he doing with the birdcage and why?

The father on the right gestures to the experiment despite the fact his eldest child is frightened – he wants to educate her.

The experimenter is right in the middle (central vertical axis) and looks out to us – this technique pulls us into the scene. This is a science lesson to be shared; learn more about the actual experiment from The National Gallery in the Cross-curricular activity section.

The red of the experimenter's dressing gown compositionally advances ('pops') which catches our attention, as does the red of his face. What do the different flesh colours of the other figures tell us about their excitement or fear?

Science is precise and this is educational: all of the colouring is descriptive; it describes what it is and feels like we're watching TV. We do not feel we're looking at a painting, but rather a moment that has been captured.

A single candle creates dramatic light and shade: strong shadows make the scene feel dramatic as though something is about to happen – will the bird be starved of oxygen? The moonlight creates a night-time, slightly secretive scene and adds to the mystery of the experiment.

There's a candle behind the murky-looking jar; what does it make us notice? There are some obvious things such as their expressions and the hand of the father who gestures toward the bird as he explains what's going on, but also some more acute detail such as the hand of the man seated on the left holding a pocket watch, presumably to time the experiment.

Both the girl and the bird are in white. Perhaps this experience is going to change the way she looks at the world?

Light and shade create texture. It helps us recognise expensive fabrics and distinguish between the bird's feathers and the satin dresses of the girls and the hard surfaces of the equipment, e.g. light is absorbed (lost) in the heavy weave of the gentlemen's jackets and is reflected from the jewellery worn by the young woman on the left.

The highly polished table is the most light-reflective surface in the scene.

There is a cloud's shadow over the moon and a mysterious bird-shaped shadow on the bottom of the cage.

Light helps us to understand what people are feeling and doing, and even how wealthy they are from the clothes that they wear and the objects in their homes.

Ask your students: how interested are they in the image now? Why?

At this point, you may also want to give your students some time to record and review their observations in a sketchbook on their own or in pairs.

Extend into a Science and Art & Design lesson by exploring light and shadow in An Experiment on a Bird in the Air Pump.

Firstly, introduce light and how it travels through different surfaces by watching the following video from BBC Teach: KS2 Science: Light, reflection and shadows from the Tardis

Looking at the painting once more, ask your students:

Joseph Wright of Derby's paintings utilise a technique called chiaroscuro (pronounced 'kee-AR-uh-SKOOR-oh'). This literally means 'from light to dark' in Italian, and the technique has been used to create the realistic modelling of the figures' faces together with highly believable textures such as the folds in the fabric of their clothes. It also helps to create strong contrasts from light to dark which contribute to the mysterious mood of the scene. The faces appear illuminated from the darkness that surrounds them, which creates an almost three-dimensional 'pop' effect.

Once you have introduced your class to chiaroscuro, split them into pairs or small groups and task them to pose for one another to recreate the different figures' dramatic tonal contrasts using light and shade. Students will need to consider where they position the sitter and the light source (e.g. using daylight through a window or an artificial source of light, such as a torch). They may want to take pictures of each pose using a tablet or digital camera.

You could extend this further by taking inspiration from Arnage Primary in Aberdeenshire who captured their exploration with light and dark in these chalk portraits on black paper for maximum contrast.

Alternatively, or additionally, watch and discuss the following film from The National Gallery and the Science Museum which explores the science behind An Experiment on the Bird in the Air Pump by explaining how atmospheric pressure works:

If you'd like to have a go at the 'No Pressure' activity mentioned in the above film, you can find it on the Science Museum's website.

You can also find a resource from The National Gallery focused on exploring this painting through Drama.

To consolidate their understanding of light and shade in art, task your students with comparing and contrasting the following pictures.

The first is a painting by a master of chiaroscuro, Caravaggio (1571–1610), while the other is a contemporary photograph of Malala Yousafzai by photographer and filmmaker Shirin Neshat which also utilises the chiaroscuro technique. To what effect do they use this technique?

You may wish to support discussion with the following areas of the Superpower Kit: Light and Figures.