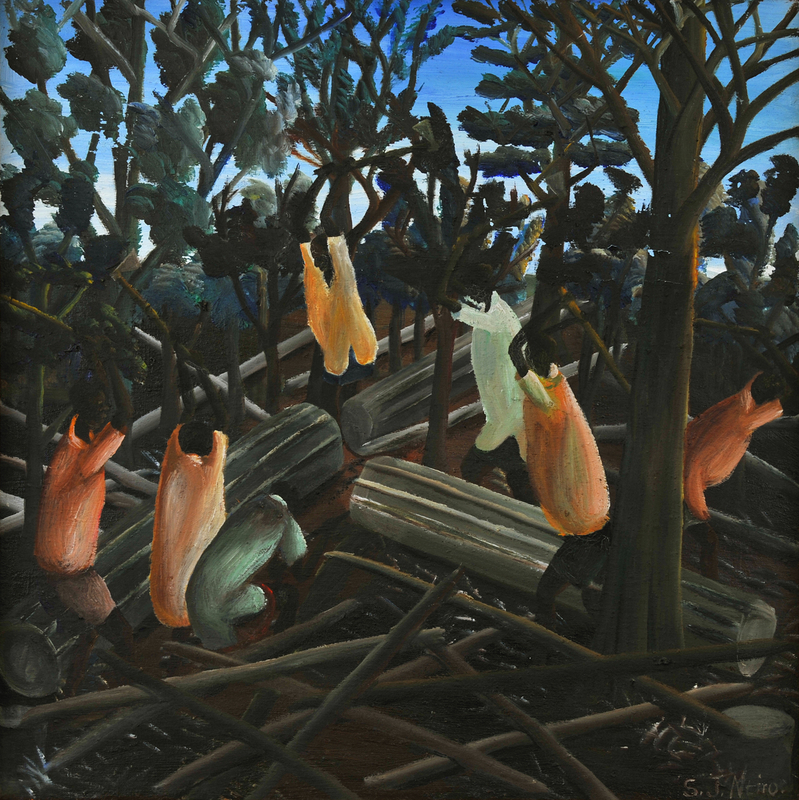 How can we explore people and places through painting?

This lesson plan resource explores Sam Ntiro's depictions of life in Tanzania and the everyday activities that people do together. It encourages students to deepen their understanding of other cultures through looking at art and to discover connections with their own culture. Through this resource, students will have the opportunity to:

This Level 2 / KS 2 Art and Design and People, Place and Environment / Geography resource includes a series of activities that can be used together as a lesson plan or as individual components to adapt and integrate into your own scheme of work.

The World Around Us – Geography
- Identify a sense of place through the use of maps, plans, photographs, atlases etc.
- Use sensory stimuli to help generate questions and ideas and make connections.

Art and design
- I have the opportunity to choose and explore an extended range of media and technologies to create images and objects, comparing and combining them for specific tasks (EXA 2-02a)
- I can create and present work that shows developing skill in using the visual elements and concepts (EXA 2-03a)
- Inspired by a range of stimuli, I can express and communicate my ideas, thoughts and feelings through activities within art and design (EXA 2-05a)
- I can respond to the work of artists and designers by discussing my thoughts and feelings. I can give and accept constructive comment on my own and others work (EXA 2-07a)

Social studies - People, place and environment
- By comparing the lifestyle and culture of citizens in another country with those of Scotland, I can discuss the similarities and differences (SOC 2-19a)
- To extend my mental map and sense of place, I can interpret information from different types of maps and am beginning to locate key features within Scotland, UK, Europe or the wider world (SOC 2-14a)

Geography
- identify and locate places and environments using globes, atlases, and maps, e.g. use co-ordinates and four-figure references
- estimate and calculate distances
- appreciate the diversity of communities in Wales and other countries

The focus of this resource is Sam Ntiro's painting Cutting Wood in The Argyll Collection. The Argyll Collection was originally formed to create a collection of artworks so that children living in rural communities in Argyll would have the opportunity to see contemporary art and also to find out about and make connections with other cultures.

Find out more about modern African art in The Argyll Collection

Sam Ntiro was a Tanzanian artist. He studied Fine Art at Makerere College in Uganda and then at Slade School of Art in London. After graduating he lived in Dar es Salaam, where he became a successful artist and a champion of Tanzanian art. Among his many achievements, he was also the Tanzanian Ambassador to Great Britain from 1961 to 1964. 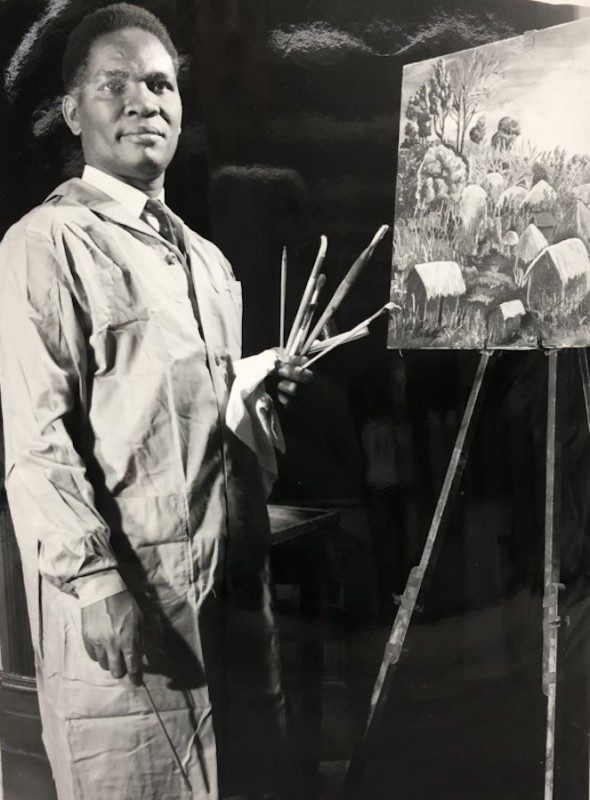 Group activity: Who is Sam Ntiro?

Introduce Sam Ntiro to your students. This photograph of the artist was taken in 1960 in New York. Sam Ntiro sent it to The Argyll Collection in Scotland when they purchased his painting Cutting Wood.

The photograph shows Sam Ntiro, an artist from Tanzania, a big country in Africa. In the photograph, he is holding brushes and standing in front of a painting. The painting is on a stand called an easel. (He is also wearing a work coat to protect his clothes from getting paint on them.)

After going to art college to study painting he moved to the biggest city in Tanzania, called Dar es Salaam. But he liked to paint his memories of life in the countryside, like the village that we can see in this painting.

Activity: where was Sam Ntiro from?

Sam Ntiro was from Tanzania, a big country on the east coast of Africa.

Discuss with your students:

Like Scotland, Wales, Northern Ireland and England, Tanzania has mountains, lakes, flat areas of countryside where people graze animals and grow food, and seaside. It also has big cities.

What things did Sam Ntiro paint?

Even though Sam Ntiro moved to a big city, he liked to paint about life in the countryside where he grew up. Sam's family were members of the Chagga people, a group who have been farmers around Mount Kilimanjaro for a long time.

He painted scenes of everyday life in the village and often painted people working together.

Look at this painting with your class.

Ask your students what they think is happening in the picture.

Ask your students to think about how Sam Ntiro has painted the scene.

The painting Cutting Wood shows a group of seven people in a forest chopping wood. They may use the wood to make a fire for cooking food. Wood is also used to build houses and make other objects such as furniture or tools.

Sam Ntiro has depicted the forest by painting lots of different trees. He hasn't used lots of colours to paint the forest, suggesting that the big trees are blocking out any sunlight and making the forest dark and shadowy. The bright clothing that the people are wearing stands out against the darkness of the forest that surrounds them.

The shapes of the figures in the painting look very similar. Their individual features aren't defined. Perhaps Sam Ntiro wanted to emphasise the shared task of the figures, and that they are working together towards a shared goal.

Here is another painting by Sam Ntiro showing people working together.

Discuss the painting with your students.

The painting shows people harvesting bananas. Men and women are working in groups. A group of men are bending the branches of a banana tree with a long stick so that they can reach the bananas. Another group are cutting a bunch of bananas off the bent tree. A group of women are bending down over the cut bunches of bananas and preparing them to be carried away.

Bananas grow in big bunches. They are harvested when they are green as this keeps them in better condition for transporting them. They turn yellow when they are ripe and ready to eat.

With your class compare this painting showing a fruit harvest by Scottish artist John Johnstone, with Sam Ntiro's Banana Harvest.

Ask your students what they think John Johnstone's painting shows, and to think about the similarities and differences between this painting and Banana Harvest.

The fruit pickers are picking raspberries. The raspberries are growing on tall-stemmed canes, not on trees as the bananas grow. (When you see raspberries growing wild in the countryside the bushes they grow on don’t look as neat as this!)

The harvesting scene is similar to the scene in Sam Ntiro's painting in that the people are working together to harvest fruit. Some are picking the fruit and some are putting the fruit into baskets ready to be taken away to markets or shops.

Activity: village life home and away

Task your students with exploring more paintings by Sam Ntiro showing village life in Tanzania. This could be an individual activity for the classroom or homework, or students could work in small groups.

Once your students have completed their tasks, ask them to share their ideas as a class.

The first painting shows a village in Tanzania. (It is not the village that Sam Ntiro grew up in, but his village might have looked a little like this.) The houses in the village are clustered together. We can see a fence and a garden just as many houses in the UK have. But the houses look very different from the type of house we might see in Scotland or the rest of the UK. They are not built from bricks or stone with tile or slate roofs. Many houses in African villages are built using a wooden frame and a mixture of stones and dried mud to make the walls. The roofs are often made from a thatch of leaves or grasses.

The third painting shows cattle drinking water from a trough. This will be a familiar scene for students who live in or near the countryside. The landscape is hilly and dry-looking but it doesn't look like a desert as there are lots of trees in all the paintings.

Task your students with making a drawing or painting that shows a scene of people working or playing together in the place where they live. The suggestions below provide some ideas for planning the picture.

Discuss activities that people do together with your students. These might include:

In the carousel below are more paintings from Art UK's website showing people taking part in shared activities.

Discuss the paintings as a class.

Ask your students to decide what they will draw or paint, and to share their ideas with the rest of the class. (This might help students to pinpoint a plan and articulate their ideas.)

Use these prompt questions to help them to think about and plan their pictures.

Our sense of place

Sam Ntiro was an ambassador for Tanzania in the 1960s. Task your students with thinking about what they would share about the place where they live if they were an ambassador. They could collect images and write brief texts about their sense of place which could be presented either in notebooks, as a digital presentation or as an inspiration or mood board.

This would work well as an individual study or homework project.

This resource includes a map of Africa and suggestions for looking at maps of Tanzania with your students. This could be the starting point for a more in-depth investigation into maps and mapping. Explain how maps are used to find our way and how scales are used on maps to measure distance. You could also task your students with making a map of your school or local area.

Houses around the world

Sam Ntiro's painting Buguruni Village shows typical village houses in Tanzania. Use this painting as a starting point for a geography project looking at houses in different countries and how they are built. You could task students with constructing models of different types of buildings, exploring the properties of construction materials.

Twenty-five different types of houses from around the world
BBC Bitesize: The World Around Us, houses and homes
Outdoor Learning Made Easy: construct a Kenyan mud hut
How to build a mud hut