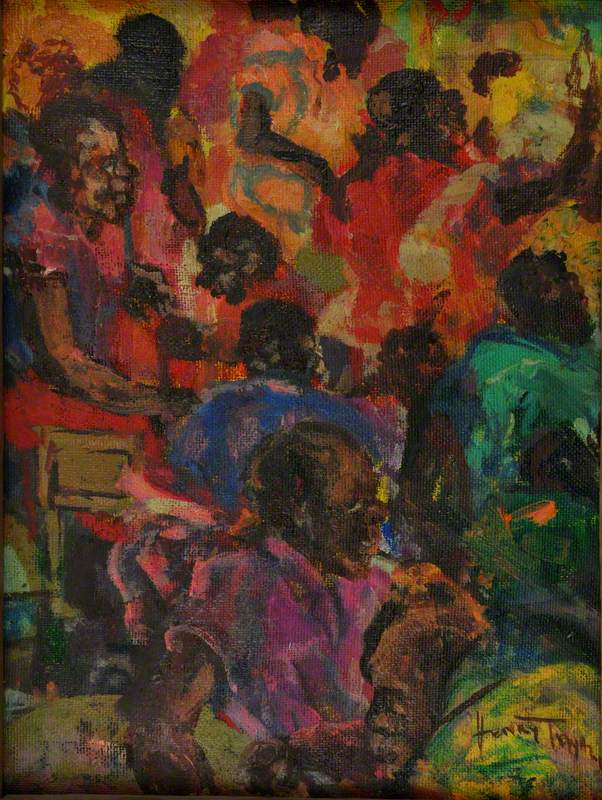 How can composition, colour, and mark-making be used to create a bustling, lively atmosphere in painting?

This resource takes an in-depth look at Zambian artist Henry Tayali's untitled painting of a busy café or bar.

Through discussion and analysis, students will explore the inspirations behind the painting and the visual elements used by the artist. The resource also includes suggestions for a painting project inspired by Henry Tayali's work with research links to other modern and contemporary artists.

This lesson plan resource can be used to support students in:

This Art and Design resource offers a series of activities that can be used together as a lesson plan or as individual components to integrate into your own scheme of work. It is devised for CfE Level 3 / Key Stage 3 but may also be useful for Level 4 / Key Stage 4 students.

Art and design
- I have experimented with a range of media and technologies to create images and objects, using my understanding of their properties (EXA 3-02a)
- Through observing and recording, I can create material that shows accuracy of representation (EXA 3-04a)
- I can respond to the work of artists and designers by discussing my thoughts and feelings. I can give and accept constructive comment on my own and others' work (EXA 3-07a)

This is one of two lesson plan resources for secondary age students that focus on modern African paintings in The Argyll Collection in Scotland. They can be used individually or together within a lesson plan, offering students the opportunity to explore the contrasting approaches to painting mood and atmosphere.

About The Argyll Collection

The Argyll Collection was developed between 1960 and 1988 as a learning resource for the young people of Argyll and Bute. It was established by writer Naomi Mitchison (at that time a Councillor for Argyll and Bute) and Jim Tyre, art advisor to the Council.

'My plan had two edges: one was purely artistic. But the other was to build up a Scottish confidence, a sense of nationhood, something a civilized person could be proud of.' – Naomi Mitchison, Times Educational Supplement 1966

The focus of the collection is contemporary Scottish art, but it also includes artworks from Africa and Asia, collected by Mitchison on her extensive travels. She wanted students in Argyll to be able to connect with other cultures, and often selected artworks that linked these cultures with Scottish cultures – such as scenes of fishing or agriculture.

First impressions: what do you think?

Ask your students to look at this painting and describe their first impressions.

Use these nudge questions to help to get the discussion going:

The painting shows a bustling scene with lots of people – at a party or in a bar or café. The people are sitting in groups at tables and chatting and dancing (at the back) so there is probably music. There is a lot going on and the atmosphere is lively.

Find out about Henry Tayali and look at the painting in more depth with your students.

Who is Henry Tayali?

Henry Tayali was born in 1943 in what was then Northern Rhodesia (it became Zambia after independence). He was a talented artist from a young age and held his first exhibition when he was 15.

He trained at the renowned Makerere College in Uganda, and then Düsseldorf Art College and became one of Zambia’s most revered artists. A national contemporary art gallery in Zambia is named after him.

Look at this photograph of Henry Tayali in his studio with your students. Behind him, some paintings are stacked against the wall.

Behind the artist, lots of paintings are stacked. They are painted with expressive, gestural abstract marks. If you look closely you will see that one of the paintings shows clenched fists and the word 'freedom'.

When Henry Tayali was born, Northern Rhodesia was part of the British Empire. Black African people in the country did not have the same rights as the very small number of white Europeans who lived there.

Tayali played a pivotal role in the cultural and artistic development of Zambia, as a lecturer in African Art at the Institute of African Studies in Lusaka and as President of the International Association of Artists.

Zambia is a landlocked country and does not have a coastline. It has lots of natural resources, including wildlife, forestry, freshwater, and arable land. It is also rich in minerals – especially copper.

The mining of copper on a large scale changed Zambia from a country with lots of small villages, to one with big bustling cities. The population is concentrated mainly around Zambia's capital Lusaka in the south of the country, and in the cities in the north where copper is mined.

Find out more about Zambia

Henry Tayali lived in Lusaka and documented the lives and hardships of the people living in the city.

His paintings and prints often evoke busy urban spaces, particularly bars and cafés where people relax after work. He felt it was important to reflect the identity of the Zambian people and culture in his paintings.

Group activity: how has Henry Tayali created the bustling, lively atmosphere of his painting?

Although the painting shows a real place and real people, Tayali has abstracted the scene using composition, colour, and gestural brushstrokes to capture not only what the bar looks like but also what it feels and sounds like.

Discuss the composition of the painting with your students. (You may need to explain that the word composition is used in art to describe the arrangement of the various elements that make up an artwork.)

Henry Tayali has filled the canvas with people. The figures towards the front are larger (to give a sense of perspective). The people are not carefully defined – we don’t really see whole figures, just heads and arms and the colours of clothing.

Some of the figures are cut off by the edge of the painting, which makes it look like a hastily taken photograph.

The mood of the painting is of energy and movement. The busy composition suggests music, conversation and dancing.

This print by Henry Tayali shows another busy scene – a beer garden.

At first, it looks abstract, a muddle of wiggly lines.The composition is intricately crammed with people, benches, tables and beer glasses.

Discuss the print with your students. Ask them to respond to the composition, the way the figures are depicted and the atmosphere of the print. 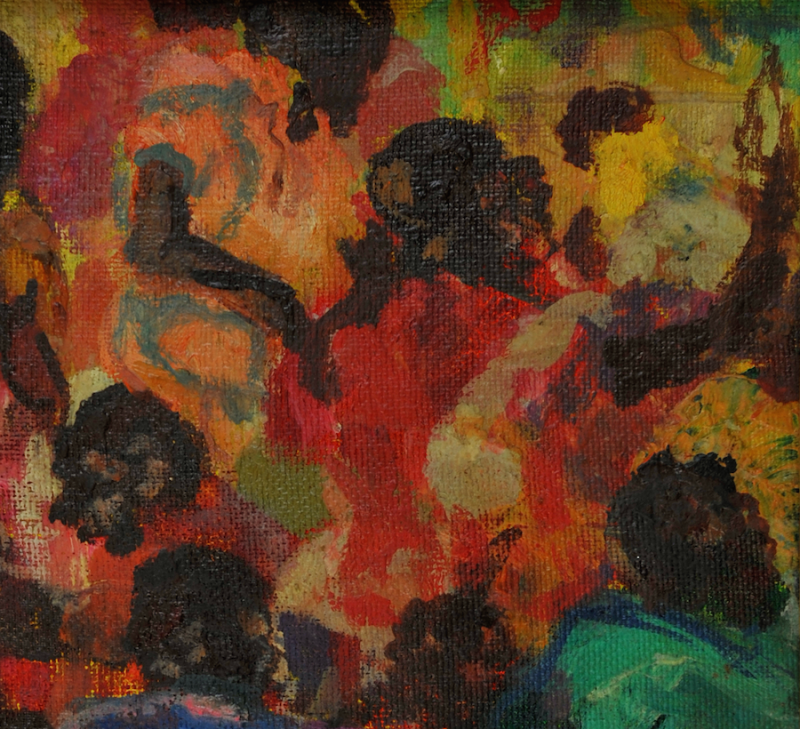 Look closely at this detail of Untitled (c.1972) with your students.

Discuss how Henry Tayali has used colour and brushstrokes or mark-making.

The quick gestural marks dabs, blobs and messy lines suggest the bustling moving of the people in the bar.

The colours add to the lively atmosphere, they are not confined to separate areas, but are repeated across the surface of the painting.

Look at the shirt of the figure at the front of the painting, it is made up of blues, pinks and purples. The figure's skin is also made up of different colours – browns, reds, deep maroons, and warm ochres.

Tayali's use of dabs of bright, broken colour could be compared to the Impressionists' use of colour to suggest fleeting movement. Like Tayali, they often painted scenes of everyday life and wanted their paintings to look as if they were capturing a moment in time.

Vincent van Gogh, and artists such as Oskar Kokoschka, Frank Auerbach and Leon Kossoff also used expressive marks and dabs of colour to suggest movement, atmosphere and their response to a subject or scene.

Have a go! Paint a busy, lively scene

Task your students with researching, planning and painting a busy, bustling scene with lots of people, inspired by the atmosphere in Henry Tayali's Untitled.

These research and planning suggestions have been written for students to follow.

Decide on a subject. Think of bustling places like busy cafés or parties, think about busy streets or beaches, or a crowd at a football match or sporting event.

Collect images of busy scenes to inspire you. You could also draw or photograph crowds of people if there are busy places near you.

Explore how other artists have depicted lively, bustling, noisy scenes. Look at how they have used composition, colours and mark-making to create a sense of vibrant activity.

Many of his paintings are inspired by music. In the 1980s and 1990s, he drew people dancing at Dub and reggae clubs in East London. The movement and music inspired the marks he made.

Look at the quick gestural marks he has used to capture bathers in this pool.

British artist Lisa Milroy also manages to suggest the busy activity and noise of a crowd in her painting Doing, Thinking, Speaking (2000). How has she done this?

Try these search terms... and think of some of your own.

Sketch some ideas for your painting and make notes to help you plan.

Top tip! Listen to some lively busy music while you're painting (on headphones, of course, if you're in the classroom!) and see if the beats and sounds inspire your mark-making.