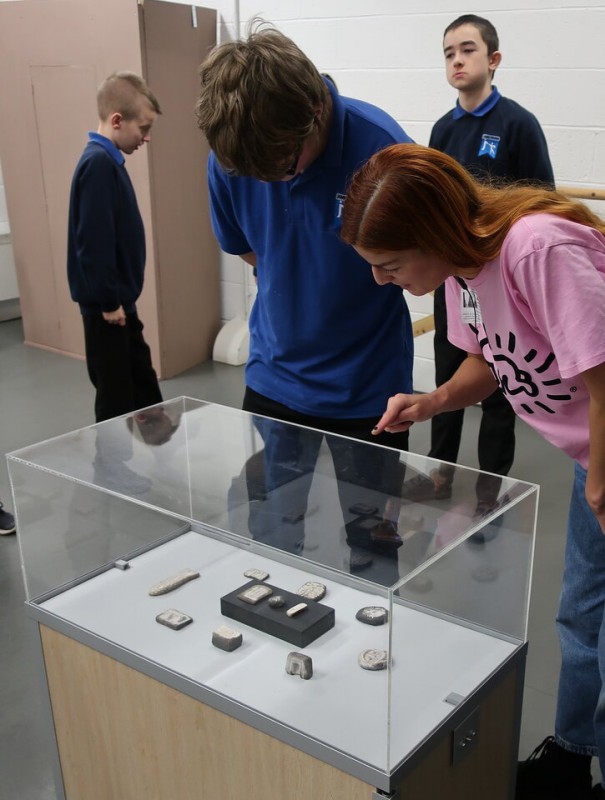 What is precious enough to you to inspire a work of art?

This resource focuses on the sculpture of Cumbrian artist Lorna Graves (1947–2006) with a suggested activity which aims to:

These lesson plan ideas are inspired by an event that took place at a SEND / ASN school with a variety of ages. The relief activity would work well for KS2 / CfE Level 2 to KS3 / CfE Level 3.

Lorna Graves (1947–2006) was a prolific artist who worked across drawing, painting, printmaking and sculpture during her lifetime. She made a number of animal sculptures in clay inspired by ancient cultures and the landscape of Cumbria where she lived for most of her life. While modern in style, they are reminiscent of ancient art that could have been unearthed from a burial mound.

In the following film, students from James Rennie School in Carlisle visit Tullie House Museum & Art Gallery where many of Graves' sculptures are held.

Watch the film with your students and discuss:

Finally, discuss the things that are precious to your students, which they could capture in an artwork. Is it a pet, a family member, a hobby, a special object or something different?

Box of Stones is a series of 12 simple shapes made from clay. They have been fired using the Japanese Raku technique. This involves placing the clay – while it is still very hot – in leaves, twigs and wood shavings that catch fire, producing smoke and ash which embeds itself on the surface of the sculpture. The 12 small sculptures are presented in a black box, like a time capsule of relics from the past.

Explore all 25 images of Box of Stones on Art UK with your students and discuss what they think each of the sculptures depicts.

Activity: create a sculpture in relief

In this activity, students will create a simple sculpture that depicts something that is precious to them. This is inspired by a workshop that took place at James Rennie School, led by artist Shona Kinloch.

Ask your students to draw something or someone precious to them on a piece of paper or card. If available, use charcoal instead of pencil so their mark-making is thicker and clearer. Students could also examine and experiment with the effects they can get with charcoal, compared to pencil, such as line thickness, smudging and rubbings.

Once students are happy with their drawing, it is time to recreate the shape and line in relief. Cut a lump of around 1.5 kgs of clay per pupil and get them to roll it and warm it in their hands.

Students should flatten the clay out on a board until it is around 1 cm in thickness across. They can then begin to create a relief based on their drawing by first marking out their drawings using a pointed modelling tool on the clay.

By adding and removing clay using the other modelling tools, slowly but surely, they will create their own artwork akin to one of the small sculptures that form part of Graves' Box of Stones. If working with air-drying clay, allow each sculpture to dry for a couple of weeks before putting the work on display. If you have worked with firing clay, you should fire the works according to the temperature guidance on the clay packaging.