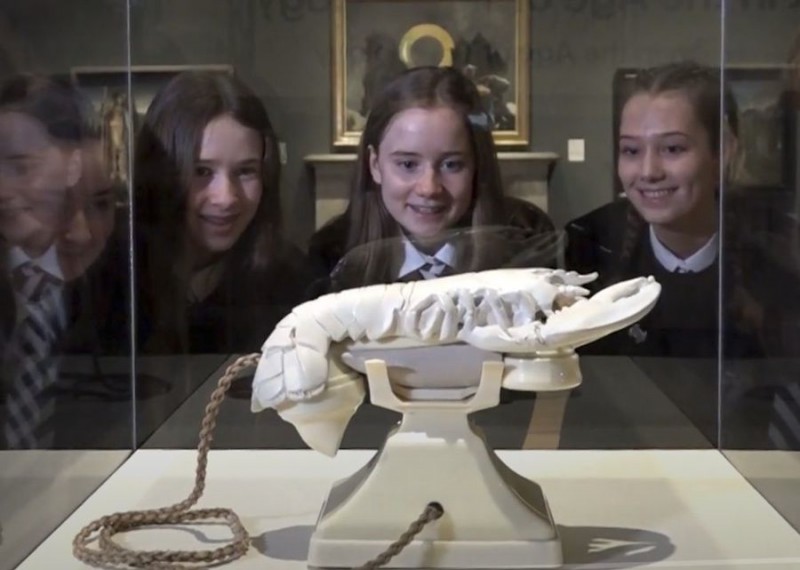 What is Lobster Telephone and what does it tell us about Surrealism?

Focusing on Salvador Dalí and Edward James's sculpture Lobster Telephone (1938) in the Scottish National Gallery of Modern Art, this resource provides an introduction to Surrealism. Through videos, discussion, and practical activities, students will:

These lesson ideas can be used together, or individual components could be integrated into your own scheme of work. The resource includes group activities and suggestions for individual study. It is devised for Level 3/Key Stage 3 students, but may also suit Level 4/Key Stage 4.

Art and design
– I have experimented with a range of media and technologies to create images and objects, using my understanding of their properties (EXA 3-02a)
– Through observing and recording, I can create material that shows accuracy of representation (EXA 3-04a)
– I can respond to the work of artists and designers by discussing my thoughts and feelings. I can give and accept constructive comment on my own and others' work (EXA 3-07a)

Lobster Telephone (1938) is a sculpture in the Scottish National Gallery of Modern Art in Edinburgh. It was created by artist Salvador Dalí and poet Edward James, and is made from a plaster lobster and a functioning Bakelite telephone. It is one of several versions of Lobster Telephone made by Dalí and James. (Edward James used some of them as telephones in his house!) As well as white versions such as this one, polychrome versions of the sculpture were also made, with black telephones and orange lobsters.

Salvador Dalí is perhaps the best-known artist associated with the Surrealist movement, largely because of his showmanship and talent for self-publicity. Born in Spain, he moved to Paris in 1926 and joined the Surrealists in 1929, after dabbling with Cubism and various other styles. His artistic output of the late 1920s and 1930s exemplified Surrealist interests and ideas – especially their fascination with dreams.

Edward James was an English poet and art collector. He supported many Surrealist artists in their careers including René Magritte, Max Ernst and Leonora Carrington as well as Dalí.

Look at this photograph of Lobster Telephone with your students.

Discuss the sculpture as a class.

It may help in gathering first impressions, to task your students with thinking of five words in response to the sculpture. They could write these down and then share them with the rest of the group. (The words should be honest, immediate responses and could include responses such as 'weird' or 'rubbish'!)

This video shows a group of students responding to and learning about Lobster Telephone.

What did we discover?

Discuss with your students what they have learnt about the sculpture from the video. These prompts might help:

Task your students with creating a Salvador Dalí fact file. This activity would work well as an individual research or homework project. The fact file should include brief facts about Dalí such as:

Who is Salvador Dalí?

What do you think? Ideas and objects

In the video, the curator explained that although Salvador Dalí and Edward James are listed as the artists behind the sculpture, they did not actually make it. The sculpture was Dalí's idea – he had exhibited a live lobster on a telephone at a Surrealist exhibition in Paris in 1936. Edward James (with Dalí's permission) had the plaster lobster made by local tradesmen to fit onto an existing, functioning telephone.

When existing, manufactured objects or objects from nature are used in artworks these are often referred to as found objects.

Discuss with your students:

What do you think? Lobster Telephone then and now

The students in the video wondered whether Lobster Telephone would have been more shocking in the 1930s – when it was first exhibited – than it is now:

'I think it's still a bit shocking because even though the phone is a bit old fashioned now, it's strange to see a lobster on top of any phone!'

Ask your students what they think. Use these prompts if helpful.

In the 1930s many of the sculptures on display in museums are likely to have been more traditional classically inspired sculptures.

But artists including Barbara Hepworth and Henry Moore were experimenting with abstraction, and their sculptures would have looked radical to art gallery visitors. (Although their sculptures were generally made using traditional sculpture techniques such as carving and casting, and traditional materials such as bronze and stone.)

Contemporary artworks that caused controversy when they were first exhibited, include Tracey Emin's My Bed (1998) and Damien Hirst's Mother and Child Divided (1993 & 2007).

Surrealism has had a huge influence on popular culture, so the imagery included in Lobster Telephone is probably more familiar to us now. You could discuss with your students the use of surreal imagery in contemporary advertisements, video games, comic book films and pop videos.

Task your students with writing a review of Lobster Telephone, imagining that they are a journalist or art critic in the 1930s seeing the sculpture for the first time. (This should be seen as a creative writing activity – students can imaginatively respond to the task and it doesn't necessarily have to be historically accurate!)

Explore other sculptures made in the 1930s for comparison

What can we learn about Surrealist art from 'Lobster Telephone'?

Surrealism was an art and literary movement founded in Paris in the 1920s. The Surrealists were influenced by psychoanalyst Sigmund Freud, who believed that our minds are divided into two parts – the conscious and the unconscious. Our conscious minds are rational and are what we use to make decisions every day. Our unconscious minds are where our memories are stored and fuel our irrational thoughts, dreams and fantasies.

The videos below provide more information about Surrealism.

Made for young audiences, this video provides a brief (and fun) introduction to Surrealism.

For older students, these videos provide a more in-depth introduction to Surrealism:

National Galleries of Scotland: What is Surrealism?

These are some of the ways Lobster Telephone reflects the main ideas and interests of Surrealism.

Transforming the ordinary into the extraordinary!

Discuss these Surrealist sculptures with your students. All include found objects that have been transformed to create artworks.

If helpful, use these nudge questions to get the discussion going:

Inspired by the pairing of a lobster and a telephone, task your students with making their own Surrealist sculpture by pairing two unlikely things.

Use the Surrealists' interest in chance to inspire the sculptures.

Students could start planning their sculpture by drawing or collaging photographs of their object and animal pairings together. This doesn't have to be done in a straightforward way:

Dalí and James made use of the shape of the lobster to suggest the telephone receiver. Are there any features of their animals that students could make use of in relation to their objects?

Students should now have some sketches and plans for their sculpture. Here are some ideas for materials and approach:

Use these resources for sculpture ideas and tips:

Art UK Home School: make your own pet from junk

'Found object' is the term used to describe objects used in artworks that originally had another function or purpose, for example, the telephone used in Lobster Telephone is a found object. Found objects can be manufactured, or they might be objects from nature (such as stones, shells or bones). Sometimes they are used without making any changes to them, or an artist may decide to alter an object or use it alongside other materials.

The role of women in Surrealism was often seen by the male Surrealist artists as muse or model. But many of the great Surrealist artists were women. Explore women Surrealists with your students. You could task them with choosing an artist and researching them, as an individual or homework project. Use these links for ideas.

National Galleries of Scotland: Surrealism
Khan Academy: Surrealism
Have a go at 'The Sensational Surrealism Quiz'!