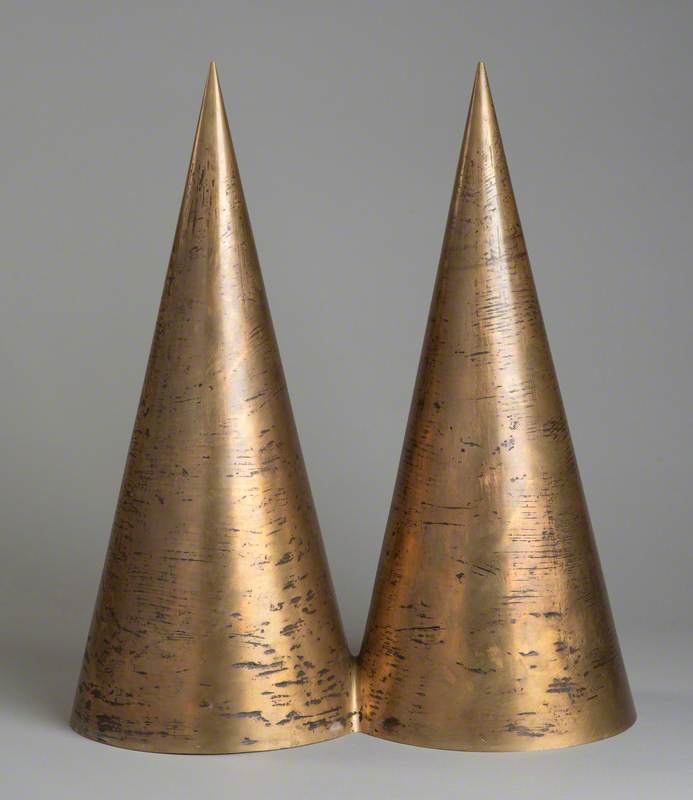 How is a cube different from a cuboid? What are the properties of a sphere? Where can we see 3D shapes around us?

This resource uses artworks to provide an introduction to common 3D shapes and their properties.

Through whole class discussion and activities students will:

This Maths and Art and Design resource offers a series of teacher-led, whole class or group activities. The questions and discussion suggestions are voiced directly to students, allowing the resource to be easily presented to the class. Teachers' guidance notes are included as well as activity ideas for exploring shapes.

The resource can be used together as a lesson plan or as individual components to integrate into your own scheme of work. It is designed for CfE Level 1 / KS 1 students / National Curriculum Wales Foundation Phase Yrs 1 & 2, but can also be adapted for younger age groups.

Year 1: Pupils should be taught to recognise and name common 3-D shapes, including:
- 3-D shapes [for example, cuboids (including cubes), pyramids and spheres]

Year 2: Pupils should be taught to:
- identify and describe the properties of 3-D shapes, including the number of edges, vertices and faces
- identify 2-D shapes on the surface of 3-D shapes [for example, a circle on a cylinder and a triangle on a pyramid]
- compare and sort common 3-D shapes and everyday objects

Mathematics and Numeracy: Shape and space

- use a range of processes

- I have explored simple 3D objects and shapes and can identify, name and describe their features using appropriate vocabulary (MTH 1-16a)

- I have the opportunity to choose and explore a range of media and technologies to create images and objects, discovering their effects and suitability for specific tasks (EXA 1-02a)
- I can create and present work using the visual elements of line, shape, form, colour, tone, pattern and texture (EXA 1-03a)

Year 2
- recognise and name regular and irregular 3D shapes, understand and use the properties of shape

What are 3D shapes?

If you don't have fabricated 3D shapes as a classroom resource, you could use everyday objects: e.g. dice, boxes, or books as examples of cubes and cuboid shapes; a ball or an orange as an example of a sphere; and a tin can as an example of a cylinder. (Other 3D shapes may be harder to find!)

Compare the shapes in these two pictures.

The first picture shows a painting of an orange square (with smaller squares inside it).

There are also some squares in the second picture. Can you find them?

These squares are joined at the edges to become a 3D shape. This shape is called a cube.

The cube in this picture is a sculpture and the artist has decorated its faces with patterns.

Now for some detective work…

Properties of a cube

All of the faces of a cube are squares.

Look at this picture. It shows a stone sculpture that is also a bench.

The bench looks a bit like a stretched cube. This 3D shape is called a cuboid. A cuboid is different from a cube because not all of its faces are squares.

Properties of a cuboid

The opposite faces of a cuboid are always the same size and shape.

Cuboids are all around us...

It might be helpful to have examples of different types of cuboids to show your students. (E.g. books and boxes with different dimensions.)

This 3D shape looks like a ball. It is called a sphere.

Properties of a sphere

A sphere has 1 curved face and no vertices. It doesn't have any edges because it only has 1 face.

Encourage students to think of descriptive words to describe a sphere. This will help them in understanding its properties. Possible words might be 'round', 'curved', 'smooth' or 'rolling'.

Here is another 3D shape. This shape is called a pyramid.

This pyramid has 1 square face at the bottom and 4 triangular faces that meet at the top.

Other pyramids have pentagonal or hexagonal or octagonal faces at one end… with 5, 6 or 8 triangular faces that come to a point opposite!

Properties of a pyramid

A pyramid always has a 2D shape with 3 or more straight sides at one end and a point or vertex at the opposite end.

The number of faces, sides, and vertices it has depends on the shape at its base.

If you don't have a pyramid shape object to explain the properties of a pyramid, use the diagrams above.

Show students where the faces, edges, and vertices are, and how pyramids have a vertex at one end and a shape with three or more sides (a polygon) opposite

The Ancient Egyptians built pyramid-shaped tombs where they buried their kings (pharaohs).

The tallest pyramid was 146.5 metres high when it was built – that's one and a half times taller than Big Ben!

Look at this picture. It shows a sculpture made from 3D shapes.

This sculpture is made of 2 cones.

A cone looks a little bit like a pyramid because it comes to a point (or vertex) at one end. But instead of a square, triangle or another straight-sided shape at the other end, it has a circle.

A cone has a circle at its base, the pyramid has a shape with straight sides. Do you know what this shape is called? (It might help to count its sides.)

A cone only has 1 edge. This pyramid has 12 edges.

The edge of a cone is curved. All the edges of a pyramid are straight.

A cone only has 2 faces – the circular face and the curved face that rises to a point (or vertex). This pyramid has 7 faces.

Cones are all around us...

Can you see any cones in these pictures?

The first picture shows a painting by Scottish artist Alexander Guy. What can you see in the painting?

The second picture shows a sculpture of a man on a horse. This is a portrait of the Duke of Wellington, who was a famous soldier and was also prime minister of the United Kingdom 200 years ago.

The statue stands outside the Gallery of Modern Art in Glasgow. The Duke is not meant to have a traffic cone on his head – but people keep putting it there!

This 3D shape is called a cylinder.

Properties of a cylinder

A cylinder has 2 circles at opposite ends. It has 3 faces altogether – the 2 circles and the curved face that joins them.

A cylinder has 2 edges and no vertices.

You could use a tin can to point out the properties of a cylinder.

Show students where the faces of a cylinder are, and explain that because a cylinder is formed of 2 circles and a longer curved face, it has no vertices.

Cylinders are all around us...

Challenge your students to make 3D shapes from modelling material (such as Plasticine) in response to descriptions of 3D shapes and their properties.

Students could work in groups or pairs so that they can discuss the descriptions and clues.

Descriptions could be, for example:

For older or more able students use the descriptions of the shapes' properties only. For younger and less able students, you may need to provide extra clues.