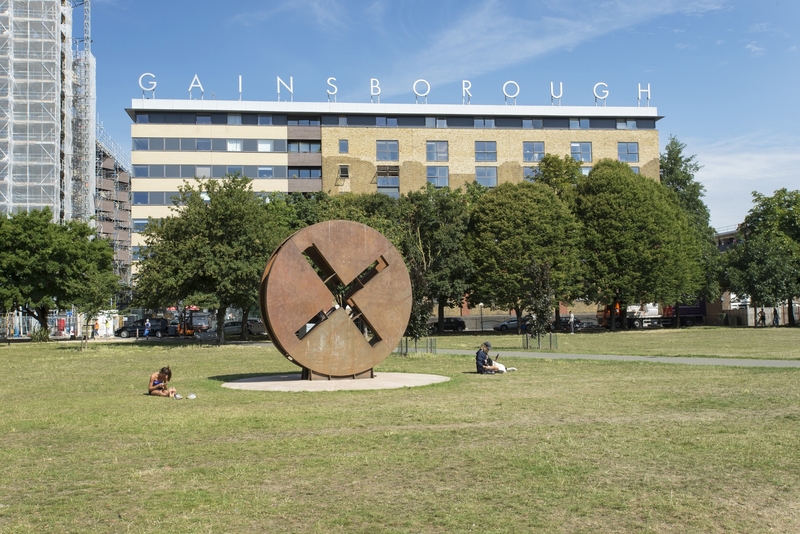 How can we tell stories without words?

Drawing from a student film focussed on the sculpture Hitchcock's Reel; the following activities support students to script their own silent film inspired by sculpture.

This Media Studies resource offers a series of activities that can be used together as a lesson plan or as individual components to integrate into your own scheme of work.

It is devised for Key Stage 4/Level 4 but may also suit Key Stage 3/Level 3.

Hitchcock's Reel is a sculpture by John Edwards. It evokes a reel of the kind used to store the celluloid film that movies were recorded on before digital recording was introduced. It is located in Shoreditch Park in London, which is next to the site of Gainsborough Studios, where Alfred Hitchcock was apprenticed and made some of his earlier films (the studio building has since been replaced with a block of flats).

At Gainsborough Studios Hitchcock mostly directed melodramas and comedies; but his 1927 film The Lodger: A Story of the London Fog was a suspense thriller. He went on to earn the nickname 'Master of Suspense' directing some of cinema's most famous psychological thrillers (including Psycho and The Birds) in Hollywood, but it was The Lodger that set him on that path. He called it 'the first true Hitchcock movie'.

Many of the films Hitchcock made at Gainsborough Studios, including The Lodger, were silent. As a result, even after embracing sound, much of his filmmaking style depended on storytelling with images rather than words. He later said, 'the silent pictures were the purest form of cinema'.

This film, inspired by the Hitchcock's Reel sculpture, was written, directed and produced by students from The Garden School with help from their teachers. Watch the film with your students and discuss the following questions:

Drawing inspiration from The Garden School students' film, and from Hitchcock, challenge your students to script and storyboard a silent film around a sculpture.

Task your students with searching through other sculptures on Art UK that they think are visually striking and inspiring. Here are some examples to kick off discussion before they begin searching.

Ask them to select one inspiring sculpture, to note down their reasons why they chose it and to sketch any of the sculpture's details they find particularly interesting. Encourage students to share their choices and reasons with one another

For this activity, your students will plan out a story for a film with no dialogue. With your students, discuss a basic story structure and what happens at each point.

Give your students time to make some notes for the beginning, middle and end of a story inspired by their sculpture choice.

Ask your students to consider the genre of film they want to create, the tone and atmosphere they want to invoke, and how they will achieve it without including dialogue.

Once they have finished sketching out their story in written form, introduce film storyboarding. Storyboards are an important stage in filmmaking. They help plan a film through visualising scenes which help filmmakers get an idea of how the story will look and flow, and help filmmakers spot any problems that might crop up. Alongside drawings of each scene, notes on camera directions, sound effects, and script may also be included.

Give each student three printed copies of our storyboard template (download and print the image above, or ask students to draw out their own). Task them with sketching out the beginning, middle and end of their film narrative, each on a respective template. Remind students that they are creating a film without any dialogue, so their visuals will have to be strong and do an effective job of telling their story without words.

In filmmaking and television production there are several types of shots, framing and composition. The exact terminology can vary but the basic principles remain the same. Camera shots will usually be described in relation to the subject or focal point of the shot. The filmmaker's choice of camera shots can add to the action or the atmosphere in a film.

Ask your students to consider which types of camera shots would work best for each scene.

Establishing shot: a wide view which introduces the viewer to the location. Sometimes known as an extreme wide shot.

Wide shot: the subject or character takes up the whole frame. This shot can also be referred to as a long shot.

Medium or mid-shot: a closer view of the character or subject, can usually be from the waist or the knees. Sometimes called the three-quarter or 3/4 shot.

Close-up shot: part of the character or subject fills the frame and becomes the focus of the shot.

Extreme close-up shot: looking closely at a character. It can give a heightened sense of drama or emotion.

Cut-in shot: shows a detail of some other part of the character or subject. This type of shot is often used in documentaries or interviews.

Cutaway shot: shows something other than the subject. In an interview, it might be something that the subject is talking about.

Over-the-shoulder shot: usually taken over the shoulder of another character. Often combined with a wide shot.

If time allows, get each student to share their storyboard and give each other feedback.

The previous activities can be built upon with students working in small groups or as a whole class to create a film based on their favourite script ideas. They could film this using traditional camera equipment, phones or tablets. They may wish to assign different roles as part of this process such as: scriptwriting, performing, directing, filming, sound effects and music, editing.

Download Art UK Hitchcock's Reel and the art of film