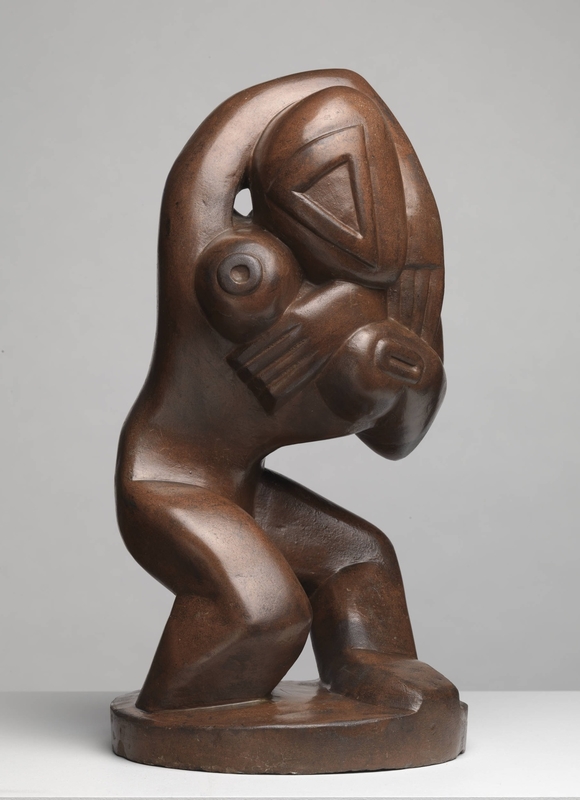 What can we learn about twentieth-century abstract art by looking at Henri Gaudier-Brzeska's work?

The following Art and Design lesson ideas are focused on Henri Gaudier-Brzeska and his development towards abstraction through the Vorticist movement. Why was he influential and what can we learn today from his artistic development?

These lesson ideas can support students to:

This Art and Design resource offers a series of activities that can be used together as a lesson plan or as individual components to integrate into your own scheme of work. It is devised for Key Stage 3/CfE Levels 3 and 4.

Art and design
– I have experimented with a range of media and technologies to create images and objects, using my understanding of their properties (EXA 3-02a)
– Through observing and recording, I can create material that shows accuracy of representation (EXA 3-04a)
– I can respond to the work of artists and designers by discussing my thoughts and feelings. I can give and accept constructive comment on my own and others' work (EXA 3-07a)

Henri Gaudier-Brzeska was a French artist who came to London in 1911 at the age of 20 without any formal art training. He was influenced by the work of Jacob Epstein and was friendly with the painter Wyndham Lewis and the poet Ezra Pound, who together created the Vorticist movement.

Gaudier-Brzeska died young in the trenches of the First World War but, in the four years before the war that he spent in London, his work developed remarkably quickly with a rapid shift towards abstraction. Despite his early death, he became an influential figure in twentieth-century sculpture in England and France.

The Vorticists developed an art that engaged with the modern world, inspired by machines and urban environments, which were of increasing interest and concern in the early twentieth century and beyond. Their paintings and drawings are characterised by dynamic, diagonal, angular forms, often in bright colours.

Vorticism was one of several international art movements throughout the 1910s which shifted towards abstraction and was itself inspired by other movements, particularly Cubism and Futurism. The abstract art movement is thought of have arisen in the early twentieth century as a response to urbanism, advances in science and technology, and in response to a growing interest in psychology, psychoanalysis and the subconscious.

Look at the examples of Vorticism with your class and ask them to discuss:

The following activity encourages pupils to make distinctions between realist and abstract styles of art through discussion of the artistic choices and techniques associated with these contrasting styles.

With your students, compare the following two portraits of Horace Brodzky (1885–1969), an Australian-born artist and writer.

The first portrait was painted in oil by Welsh-born artist Nina Hamnett in 1915.

The second was created with pastels by Gaudier-Brzeska in 1913, two years after he came to England and came into contact with artists and art collections in London.

Ask your students to take at least two minutes to study both portraits and to note down at least four differences between the works. Discuss these differences as a class. You may wish to use the following question prompts during the discussion:

Consider emphasising the following points if they haven't come up in conversation:

Follow up this discussion by taking a closer look at this sculpture of Horace Brodsky by Gaudier-Brzeska and ask students to compare and contrast it with Gaudier-Brzeska's earlier two-dimensional interpretation. You can look at the sculpture from multiple angles by clicking on the image.

Discuss with your pupils:

In the film, a group of young people visit the Hull University Art Collection and review two stone carvings of female figures, one by Gaudier-Brzeska and another by Frank Dobson. Watch the video with your students and then ask them the following questions:

Task your class with taking a closer look at these other examples of sculpture by Gaudier-Brzeska and Frank Dobson. Once again, ask them to note down differences and discuss as a class. You may wish to use the following prompt questions as part of the discussion:

Alternatively, you may wish to focus solely on Gaudier-Brzeska's sculptures on Art UK and look at his chronological development towards abstraction across his short but prolific career. Some works are posthumous cast copies made in the 1960s from works created in the 1910s, so focus on works dated between 1912 and 1914.

Split your students into pairs or small groups. Ask them to take turns drawing each other in a pose of their choosing. Explain that for this first drawing they should look closely at their life model and try and keep the proportions of the figure correct.

The next step is for them to work from their drawing only to quickly redraw the figure removing detail and simplifying the shapes. They should repeat this three or four more times in their sketchbook, making it simpler each time until they only have the essential elements of the pose.

Now get them to assess each other's work using the following questions:

Returning to the portraits of Horace Brodzky, ask your students if their opinion of these works has changed since attempting their own abstracted figure drawing.