This exhibition commemorates the 80th anniversary of the Battle of Britain, in partnership with Imperial War Museums (IWM) and with the support of the Art Fund. The Battle of Britain was a decisive air campaign fought over England during the summer and autumn of 1940.

This show explores how the lives of people in Rochdale changed as a result of a war that was to become the most destructive in history. Particular focus is given to women because of the important role they played. Whether it was by undertaking war work, volunteering or providing childcare, women have a story to tell.

Below are some of the exhibition highlights. 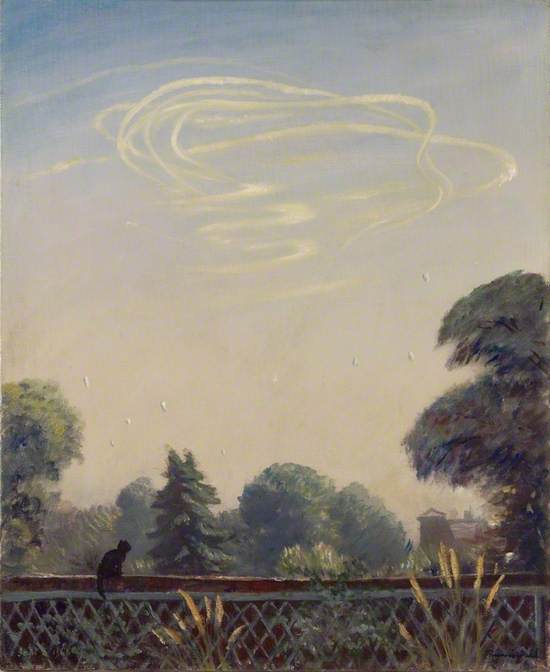 Francis Dodd was born in Anglesey and trained in Glasgow. He was commissioned as an official war artist in both the First and Second World Wars. The RAF pilots who fought during the Battle of Britain were supported by thousands of service personnel on the ground. In this work, numerous barrage balloons, used to protect cities from air attacks, are shown floating above the trees. Dodd’s painting, completed on 6 September 1940, conveys the simultaneous proximity and distance of the Battle of Britain. Aerial combat and defences are evident in the sky but life goes on below. 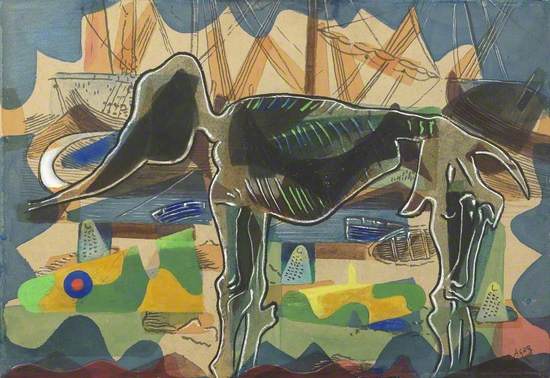 Eileen Agar was one of the few female artists selected for the ground-breaking ‘International Surrealist Exhibition’ in London in 1936. During the Second World War, she worked in a canteen by day and served as a fire watcher by night. She struggled to work as a painter during this period, writing, ‘How does one communicate with any subtlety when the world is deafened by explosions?’ This painting fuses natural and man-made elements to bring together land, sea and air. Agar depicts the outline of a prehistoric mammoth surrounded by ships’ masts, small boats and camouflaged RAF aircraft wings.

Throughout the Second World War enemy bombs fell on British towns and cities killing more than 60,000 civilians, blurring the boundaries between the Home Front and the front line.

Female artists were commissioned by the Government's War Artists’ Advisory Committee (WAAC) to create artworks as a record of the Second World War. Artists such as Dame Laura Knight depicted women adapting to wartime work. This theme in her paintings mirrored her own position as a female worker within the constraints of a male-dominated environment. Out of the 400 artists involved in the scheme, only fifty-two were women. 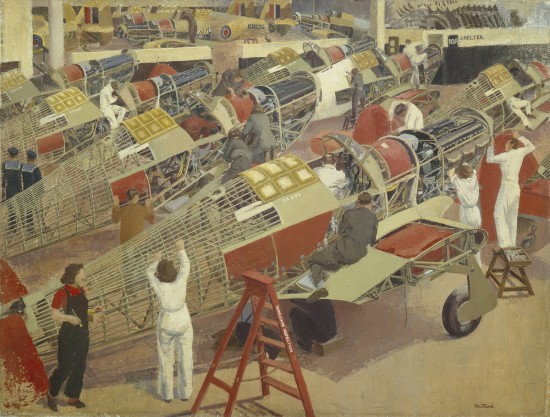 On loan from Manchester Art Gallery

Elsie Dalton Hewland was born in Sheffield. She attended her local college of art and the Royal Academy Schools, London. The WAAC commissioned Hewland to paint aeroplane subjects. This painting depicts a factory where Hawker Hurricane fighter planes were constructed and shows men and women working together on an assembly line in a way inconceivable before the war. Hurricanes, alongside the Supermarine Spitfire and Boulton Paul Defiant, were flown by the RAF to defend the country during the Battle of Britain. 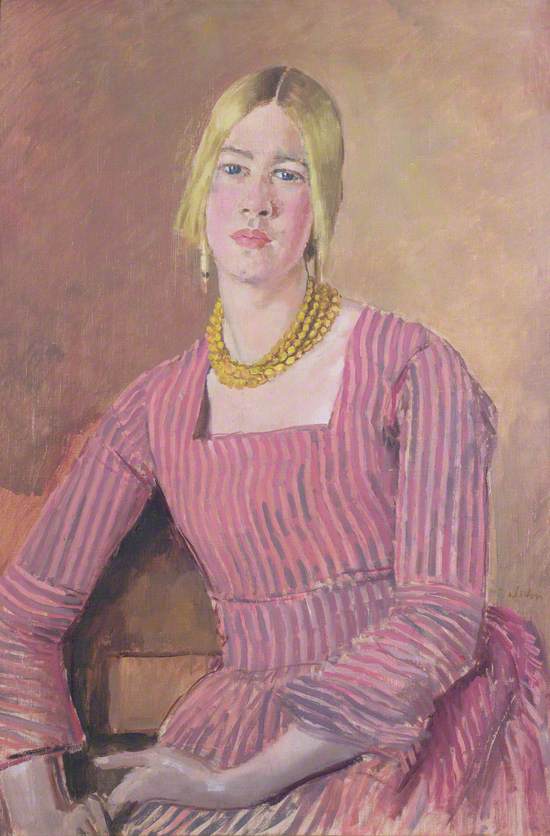 Eve Kirk (1900–69) studied at the Slade School of Fine Art, London. Her first solo exhibition was in 1930, with the catalogue including an introduction by the portrait painter Augustus John (1878–1961). His depiction of her from around this time uses boldly simplified shapes that still manage to capture the sitter’s personality. During the Second World War Kirk worked in civil defence, but also continued to paint, recording life in London during the Blitz. She submitted work to the WAAC independently and was included in the ‘National War Pictures’ exhibition held at the Royal Academy of Arts in 1945. 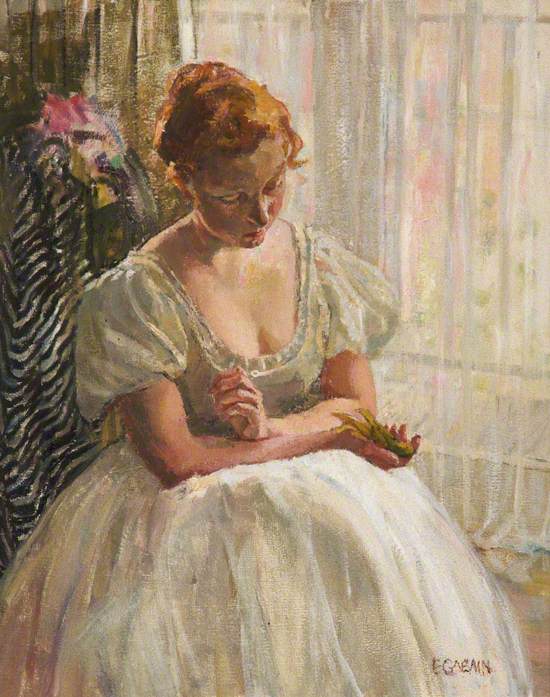 Born in France, Ethel Gabain received her art education in London at the Slade School of Fine Art and the Central School of Arts and Crafts. Throughout the Second World War, Gabain portrayed women working in what during peacetime had traditionally been male jobs. She was employed by the WAAC and her commissions also allowed her to depict pioneering medical techniques developed at the time. This painting explores a different theme, which the artist had developed while living in France. The melancholic woman could represent personal loss but would also resonate with a collective sense of grief.

Rochdale during the Second World War

The intensive bombing on British cities by German forces shaped the day-to-day lives of people like no other conflict. Reminders of air raid precautions and the need to carry a gas mask at all times became a general way of life.

At night, towns including Rochdale went under blackout to stop them being seen from above by bombers. Food, clothes and fuel were rationed. Bicycle sales increased to the extent that stock ran out in some places, with women’s bicycles much more in demand than men's. Large numbers of children were evacuated into safer areas. Rochdale welcomed 8,000 evacuees from Guernsey and the south of England. 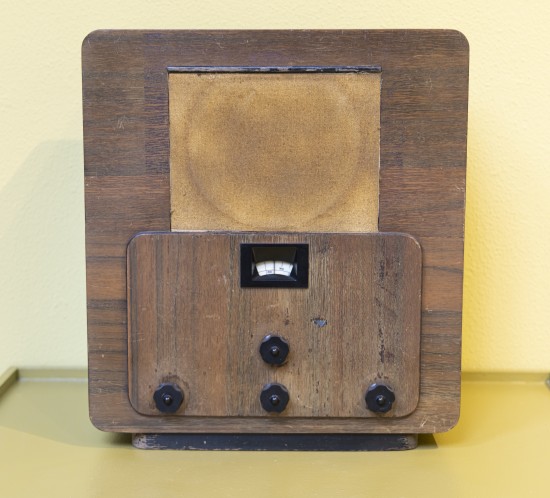 During the 1940s the radio was the central feature of the living room and was used by many families to listen to the news. Broadcasts went off air during bombing raids and people knew that the eerie fading of the radio was an early sign of an imminent attack. 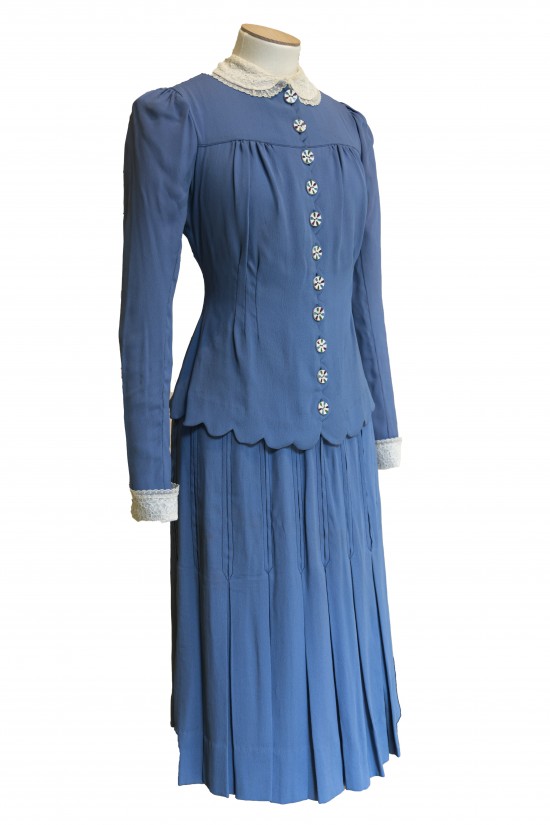 This dress was made by the groom’s mother, Dora. She worked as a seamstress following the death of her husband in 1918 from the Spanish flu pandemic, when Ernest was two years old.

Ernest and Edna met at a dance school when he was stationed with the RAF at Dishforth, Yorkshire. Ernest was employed as a motor mechanic in Rochdale before enlisting in the RAF in 1938 as an aircraft mechanic and flight rigger. A few days after his marriage, Ernest was posted to Canada and based at No. 36 Service Flying Training School. Two years passed until the couple could reunite. During this time they wrote letters to each other, barely mentioning the war but describing activities such as going to the cinema.

Rochdale Art Gallery, as Touchstones was then known, remained open during the Second World War. Although part of the building was used by the government and the basement was turned into an air raid shelter, a series of popular exhibitions, music concerts and events continued to take place here.

Around the same time, the War Artist's Advisory Committee (WAAC) was organising touring exhibitions. Sir Kenneth Clark, then director of the National Gallery, was the driving force behind these shows. He promoted a wartime demand for art and, with government support and funding, contemporary art became better known in the UK than it had been before the war. Two of these WAAC exhibitions travelled to Rochdale Art Gallery. 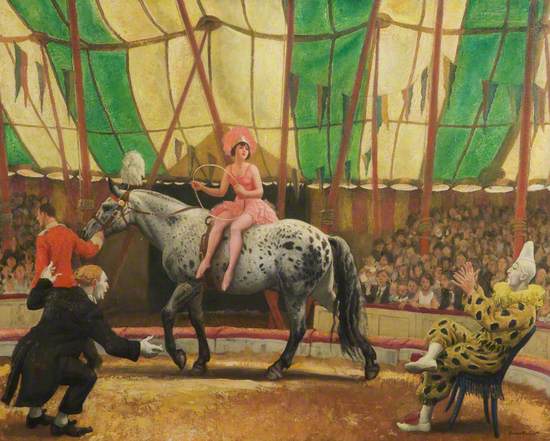 The career of Laura Knight helped female artists gain greater recognition within a male-dominated art establishment. In 1936 she became the first woman elected to full membership of the Royal Academy. Knight was keen to give marginalised communities a voice through her paintings, and this of one of many to depict circus performers. Later she worked as an official war artist. Two WAAC exhibitions toured to Rochdale Art Gallery in the 1940s and Knight’s works featured in both. Her portrait of Corporal J. D. M. Pearson, the first woman to receive the Empire Gallantry Medal, was highly acclaimed. 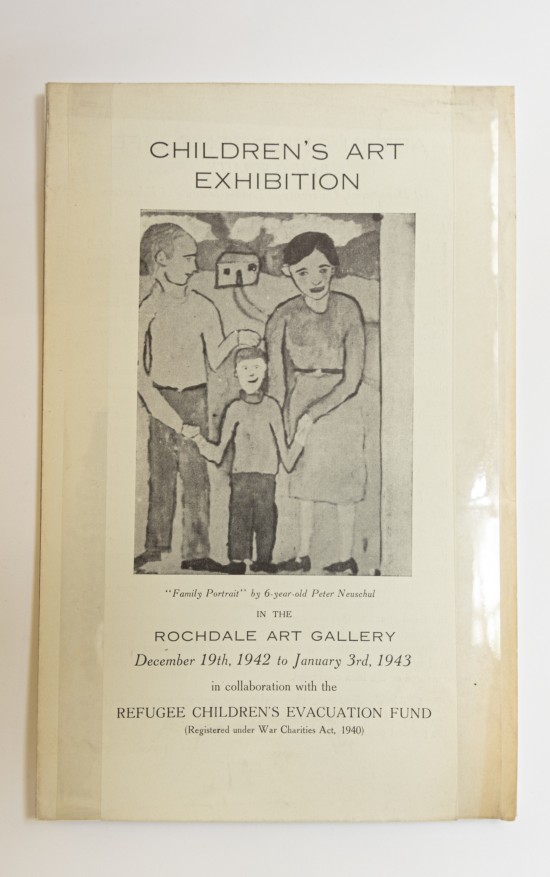 In 1942 Rochdale Art Gallery featured an exhibition called ‘Through the Eyes of a Child’. The majority were child refugees from occupied Europe who had settled in the United Kingdom.

The war forced many museums and galleries to evacuate and safely store their collections, yet at the same time it increased their popularity. Manchester, Leeds and Leicester set attendance records at their cultural venues between 1940 and 1945.


Exhibition brochure for ‘Through the Eyes of a Child’, Rochdale Art Gallery 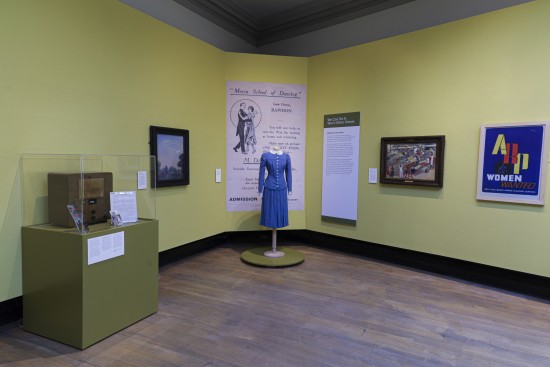 To mark the 80th anniversary of the Battle of Britain, the IWM has worked with partners to proactively lend from its rich art collection for the first time. From August 2020, Battle of Britain artworks have been displayed at three venues; Russell-Cotes Art Gallery & Museum in Bournemouth, The Harris in Preston, and Touchstones Rochdale, the final venue.