Hello, my name is Bendor Grosvenor, and I'm an art historian. I love Art UK. I also make a podcast with Waldemar Januszczak, called 'Waldy & Bendy's Adventures in Art'. We both like cheese, so for my first Curations I've selected Britain's cheesiest paintings. 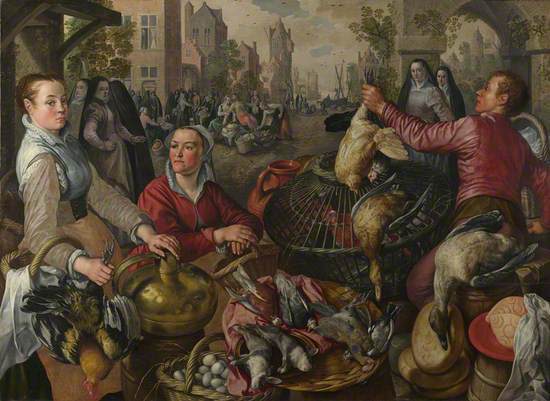 Cheese in western art, the beginnings

This still life shows how cheese painting began. An early master of still life painting in Europe was Joachim Beuckelaer. In works like this, he painted bountiful displays of food as a setting for a religious scene, the story of the Prodigal Son, which is seen in the background. The display of food in such pictures did not always have to have an obvious religious meaning itself, and the inclusion of a religious scene may have been merely a nod to respectability, at a time when art was intended to glorify religion. Two rounds of cheese, probably Gouda, are shown lower right, under the dead goose. Far into the background, what appears to be more cheese is being loaded onto a sledge. 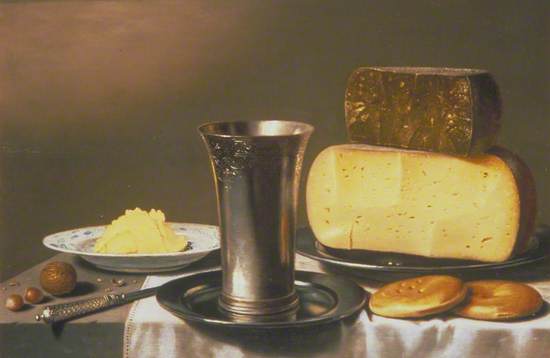 By the 17th Century, still life painting focused more on the pictorial aspects, such as illusion and technique, than any obvious religious aspect. In works such as this, stacks of cheese often helped give structure to a composition. Here we see a fine piece of Gouda, and above it a darker, more aged cheese. To the left is a plate of butter. Such pictures also celebrated Dutch agriculture. 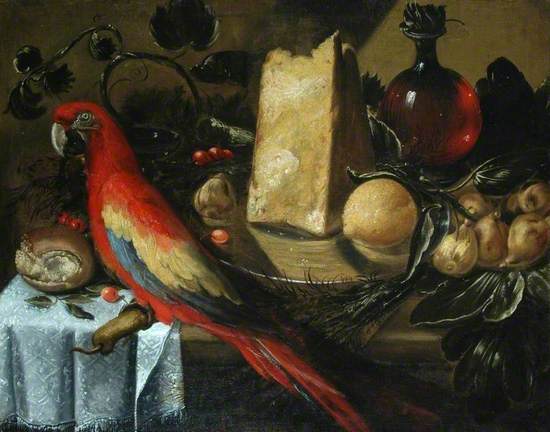 There are 3,602 still life paintings on ArtUK, and lots of them feature cheese. This is the only one to feature a parrot as well. 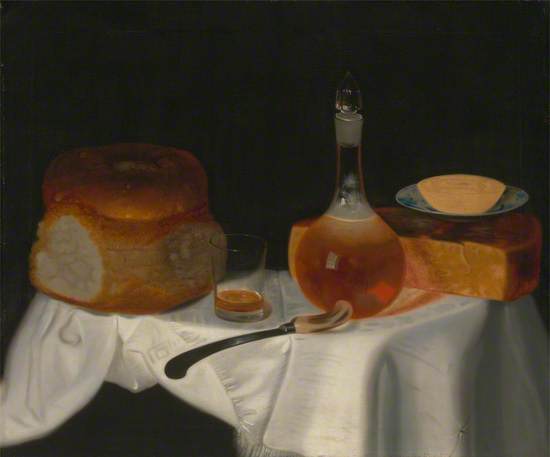 We tend to think of still lifes like this as being mainly by Continental artists. There were some British artists painting such scenes however, and George Smith was one of the best. 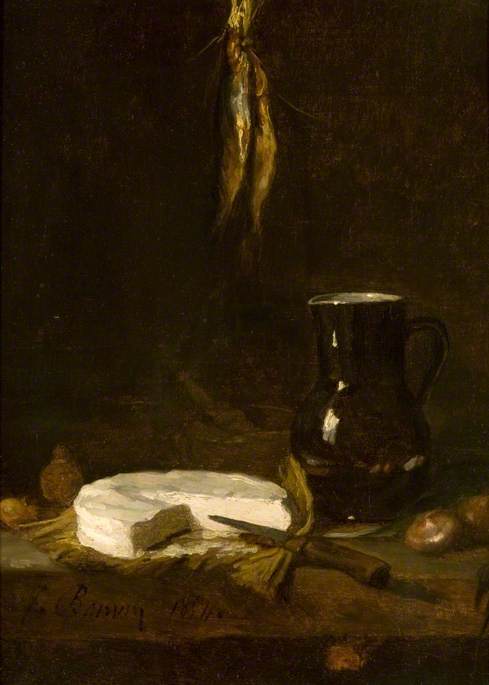 Brie first came to fame in the 8th Century, when the Emperor Charlemagne stopped for lunch at the Priory of Rueil en Brie. He liked their cheese so much he ordered regular deliveries. This painting is made by Francois Bonvin; you may have heard the famous saying, 'du pain, du vin, du Bonvin'. 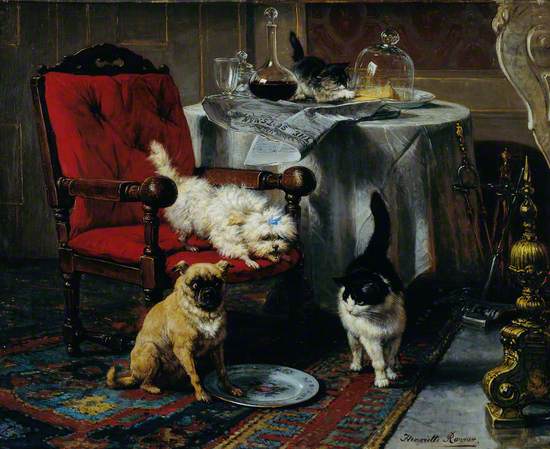 This is typical of the sort of sentimental, narrative subject that dominated painting for much of the later 19th Century. Many such works included pets. If it was a Facebook photo, it would get a lot of likes. But it's not great art. 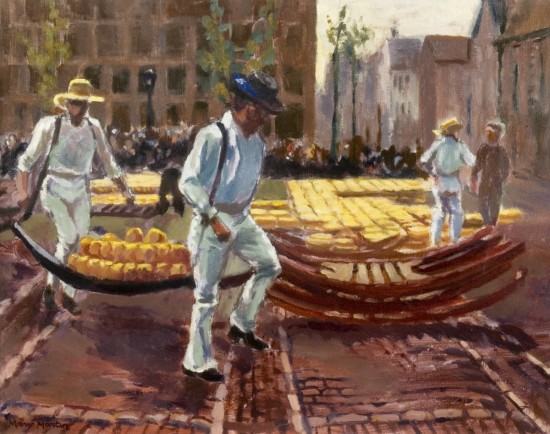 Cheese can be heavy! The Alkmaar cheese market in the Netherlands has been going since 1365. The town had the only set of working scales in the area, so everyone brought their cheese in to be weighed. It was carried on sledges, like that seen in the background of our first painting, by Beuckelaer. The people here are called 'kaasdragers', or cheese porters. They're carrying roughly my and Waldy's weekly cheese ration. 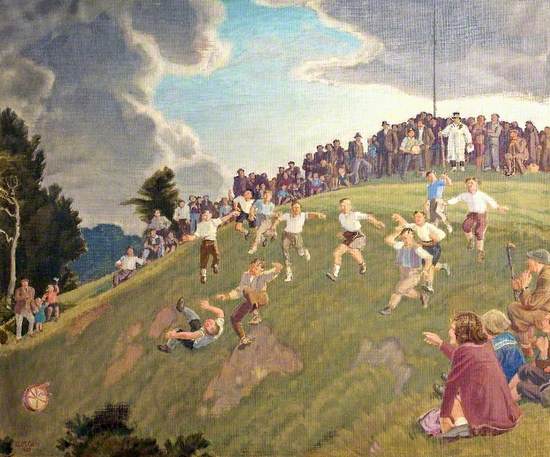 Cheese is such a versatile food, it can even be used in sport! In Gloucestershire, cheese rolling - where people chase a 4kg round of cheese down a hill - was first recorded in 1826. They use Double Gloucester cheese. 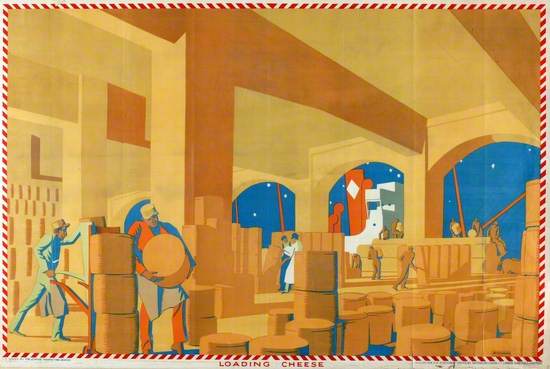 Cheese was a big deal in the days of the British Empire. In the early 20th Century there was a great debate in Britain about whether we should embrace a system of free trade, or give trading preference to goods from the British Empire. This poster was part of an advertising campaign by the Empire Marketing Board to promote cheese from the Empire. Imperial Preference was not a success, and came to an end after World War Two, when the UK signed up to GATT (predecessor of the WTO). 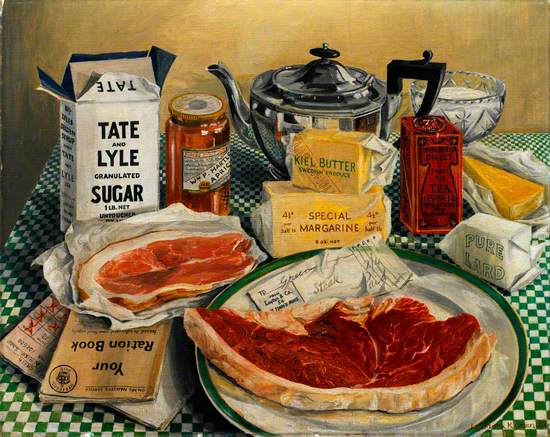 During World War Two, the weekly cheese ration per person went down to just 2 ounces. 2 ounces! As you can see here, that's not even enough for a decent toastie. 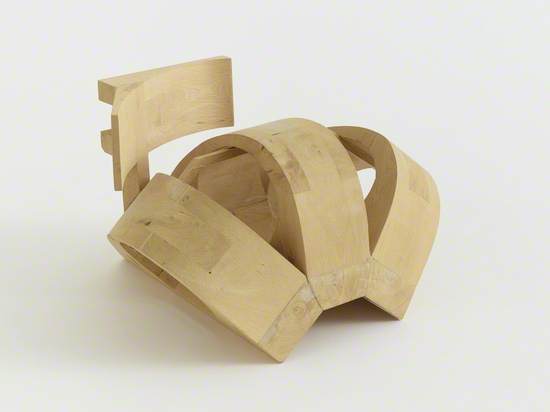 I'm struggling to find much cheese in British contemporary art. Here's an interpretation of cheese made out of wood, from 1988. Not much good for a sandwich! 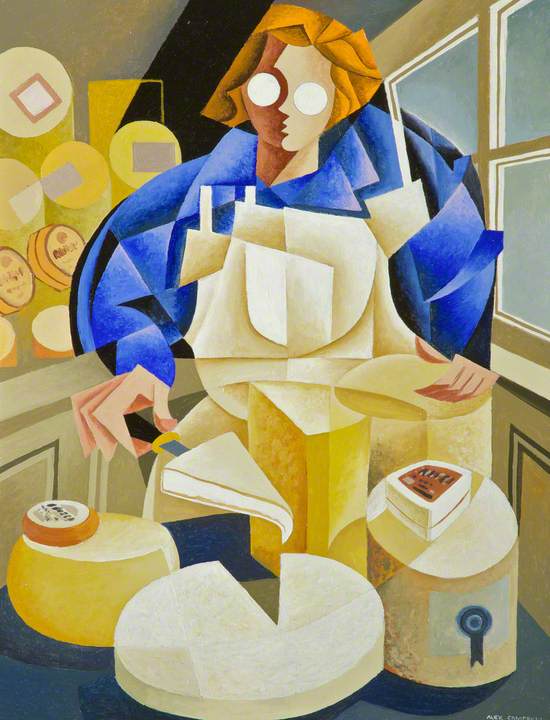 All of this cheese curating is making me hungry. So I'm off to the cheesemongers. Stay safe everyone, may your lockdowns be full of cheese!

View all 14
View all