Close
This curation celebrates the wealth of art made by refugees seeking sanctuary in Britain from Nazi Germany. It focuses on nine sculptors and painters, four of whom were born in 1897. My interest in refugee art was inspired in 2010 while recording the Cambridge University collections for Art UK's Paintings Project. At Trinity Hall Martin Bloch's eight paintings, hung in the Jerwood Library, made a strong impression on me. Similarly, when working on Art UK's Sculpture Project at the North Hertfordshire Museum in 2018, I found Georg Ehrlich's 'Recumbent Boy' unforgettable.These artists have lent depth and breadth to our national collection and Art UK's curation tool is an ideal way to celebrate their work.
Artists featured in this Curation: Martin Bloch (1883–1954), Jankel Adler (1895–1949), Oskar Kokoschka (1886–1980), Uli Nimptsch (1897–1977), Hilde Goldschmidt (1897–1980), Kurt Schwitters (1887–1948), Georg Ehrlich (1897–1966), Karel Vogel (1897–1961) and Marie-Louise von Motesiczky (1906–1996)
11 artworks
Storyline Album Showcase 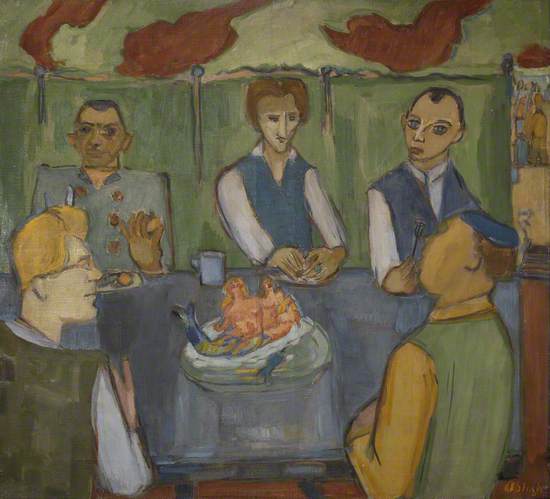 Miracle in the Internment Camp

Martin Bloch was born in Upper Silesia. He left Berlin after guards forcibly removed 'degenerate' paintings from an exhibition that he was hanging and he came to London in 1934 with his wife, Charlotte, a journalist. In 1940 Bloch was interned at Huyton Camp near Liverpool. Collection notes tell us that 'At the centre of this painting is a still life which, through the force of shared fantasy, comes alive. Bloch depicts himself (bottom right) seated with fellow internees in the camouflaged canteen tent. Fed on a daily diet of herrings and boiled potatoes, they fantasized about what they missed. Here images of food and sex come together as the "Miracle" happens - not bread into wine, but herrings into voluptuous siren-like mermaids.' 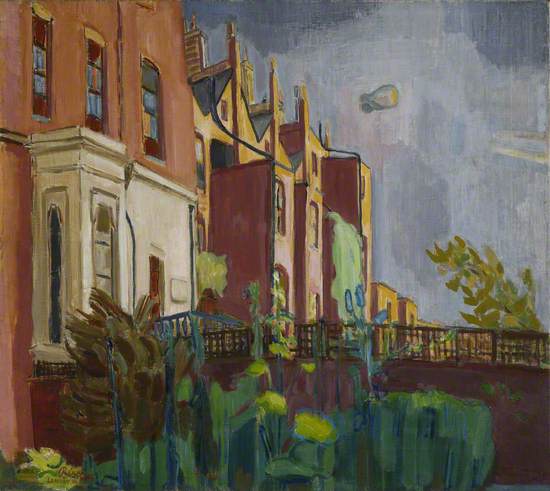 After Bloch's release from internment in 1941, the Ministry of Information cleared him to record war damage in the City of London. Collection notes inform us that 'This was the view from the back garden of a house the family lived in as caretakers; Bloch used a third floor room as his studio for some months until they were bombed but luckily no-one was hurt. This work has a clarity typical of his London paintings: it glows with that particular kind of steely blue/grey light which occurs just before a storm, a light Bloch often chose to paint. The sense of an impending rainstorm gives weight to the barrage balloon. There may be threat here, but there is also pleasure in the instantly recognisable scrappy vegetation of back gardens.' 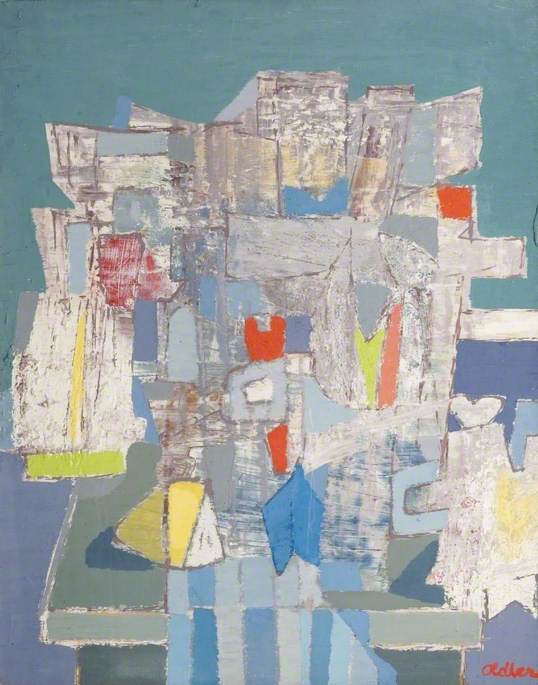 Jankel Adler was born in Łódź in Poland. In 1933, when Hitler's regime assumed power, two of Adler's paintings were exhibited in Mannheim as 'degenerate'. Facing discrimination, he left Germany for France, living there until 1940. In 1934 his works were shown in the London Exhibition of German-Jewish Artists's Work, put on to highlight the Nazis' infamous art policy.
In 1940 he went to Scotland staying briefly in the artists' colony in Kirkcudbright and later became an early member of the Glasgow New Art Club, founded by John Duncan Fergusson. He moved to London in 1943, settling in Campden Hill near his fellow refugee painter, Martin Bloch. 'Composition' may belong to 1930s when Adler began to produce abstracts. (ODNB) 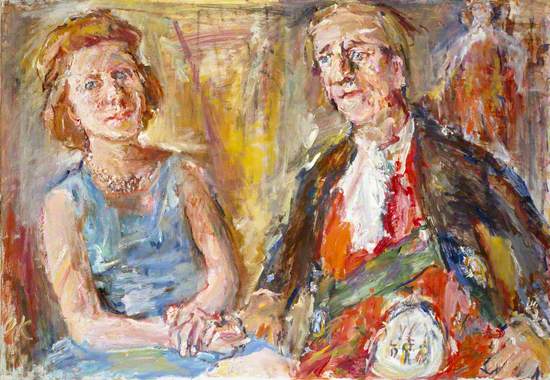 Oskar Kokoschka's family settled in Vienna in 1887. Designated a 'degenerate' artist by the Nazis, he left Austria for Prague in 1934. Four years later, he fled to London with his future wife, Olda Palkovská, a student lawyer. Having obtained Czech citizenship, Oskar avoided internship unlike many Nazi refugees arriving in England with German or Austrian passports. He married Olda in 1941 and during the war they visited Scotland, often staying in Ullapool on Loch Broom.
Collection notes say that this touching double-portrait shows the broken, textured brushwork that characterises Kokoschka's work. The artist uses vibrant colours to suggest the characters of the sitters, such as reds and oranges for the duke's kilt. 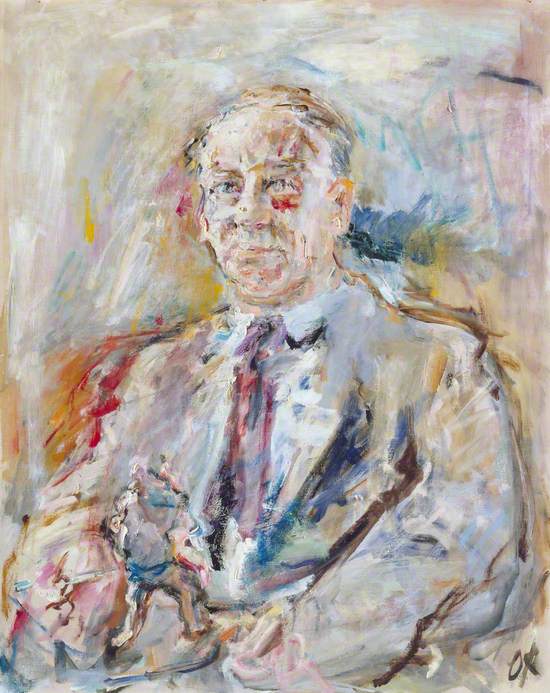 This portrait by Oskar Kokoschka at the Royal Academy depicts Uli Nimptsch, the first of the four artists born in 1897.
Nimptsch, a sculptor, was born in Berlin and studied in Rome in the early 1930s. He left Germany fearing for the safety of his Jewish wife, Ruth Steinthal. They went to Rome and Paris before settling in London where Nimptsch could speak no English. He became a British national after the war and the couple lived on the Fulham Road.
He exhibited regularly at the Royal Academy, becoming ARA in 1958 and RA in 1967. From 1966–1969 he was Master of the Sculpture School. He died in 1977 and bequeathed this portrait, painted by his friend Kokoschka, to the Academy. 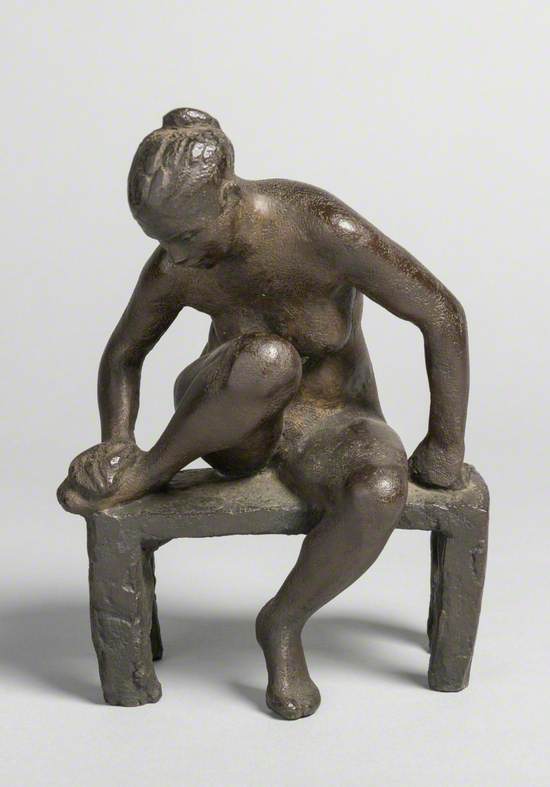 © the copyright holder. Photo credit: The Whitworth, The University of Manchester

A Woman Seated on a Bench Washing Her Foot

Nimptsch's small (17.5 cm) bronze life-study of a woman washing her foot may be dated to the 1950s. There is a similar, slightly larger, piece dated 1956 at Christchurch Mansion in Ipswich. Nimptsch expresses the girl's concentration by the intensity of the gaze directed on her foot and the way the knuckles of her left hand are grounded on the bench.
His equally arresting 'Old Man and Young Boy', with two bronze figures seated on a bench, is in the entrance to Luton Central Library. On the plinth is inscribed: HE THAT LOVES READING HAS EVERYTHING WITHIN HIS REACH, a quotation by William Godwin, husband of Mary Wollstonecraft. Perhaps the work is a self-portrait of Nimptsch helping his only son?

A Woman Seated on a Bench Washing Her Foot 20th C
Uli Nimptsch (1897–1977)
The Whitworth, The University of Manchester 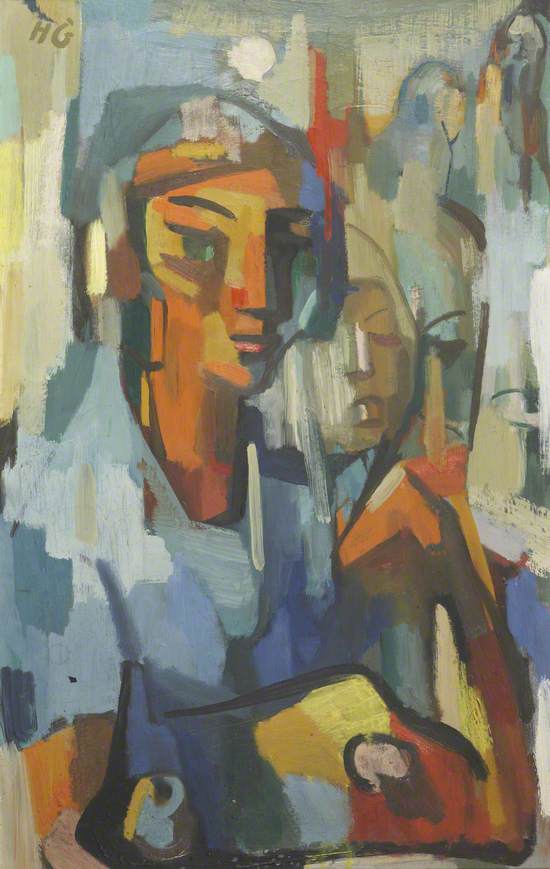 Hilde Goldschmidt, printmaker, painter, poet, book designer and dancer, was born in Leipzig in 1897. At the Dresden Academy of Fine Arts she was taught by Oskar Kokoschka. The authorities closed down her first solo exhibition in Munich so she moved to Austria and when Germany annexed Austria in 1938 (the Anschluss), she sought refuge in London. After holidaying in the Lake District, she settled near Ambleside and befriended a fellow refugee artist, Kurt Schwitters. In 1949 Goldschmidt returned to Austria.
The collection notes that 'In this painting, she uses heavy, controlled brushstrokes and blocks of colour to construct a solid, serene image, perhaps reflecting her contentment at having finally returned home.' 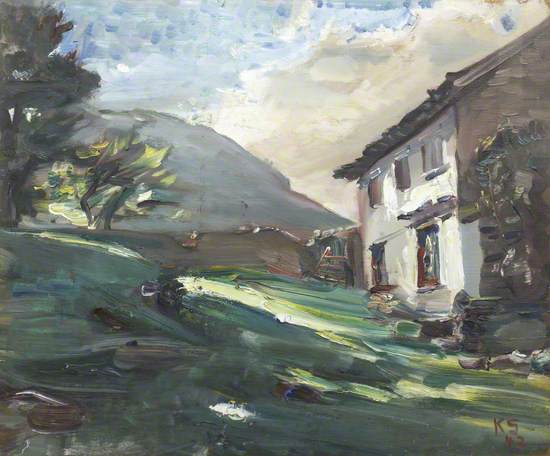 This painting represents a cottage outside Grasmere and belongs to the war period when Kurt Schwitters, influential artist and poet, lived in the Lake District. He was born in Hanover and during WW I began creating collages, which he described as Merz-pictures, for which he is well-known. After his work was included in the notorious 'Degenerate art' exhibition of 1937, he went to Norway and when the Germans invaded, he fled to Edinburgh in 1940. He was interned with other artists, literati and musicians in Hutchinson Square, Douglas, on the Isle of Man.
In 1945 he moved to Little Langdale near Ambleside, where he continued working on Merz projects and where he met Hilde Goldschmidt. He is buried in Ambleside churchyard. 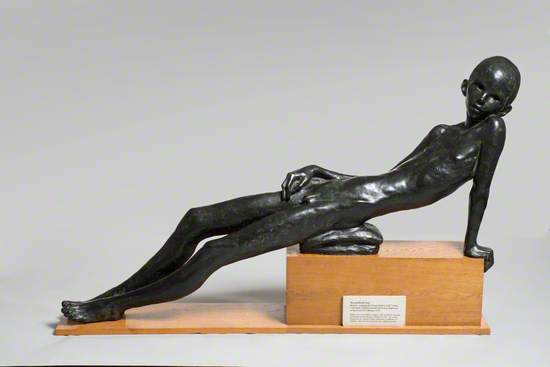 Georg Ehrlich, sculptor, was born in Vienna in 1897. Ehrlich was in London at the Anschluss and when it became too dangerous for his wife, Bettina Bauer, also an Austrian Jewish artist, to stay in Germany, she joined him in England, bringing many of his works with her.
The ODNB comments that 'Although his work never looked English, Ehrlich responded to the mood of post-war Britain. The contemporary angst had its reflection in his increasingly etiolated, mannerist figures, such as Recumbent Boy.' The caption states that this piece was cast from a plaster model, which had been displayed at the Festival of Britain in 1951. It was presented to the Letchworth Museum by Bettina Bauer in 1968. 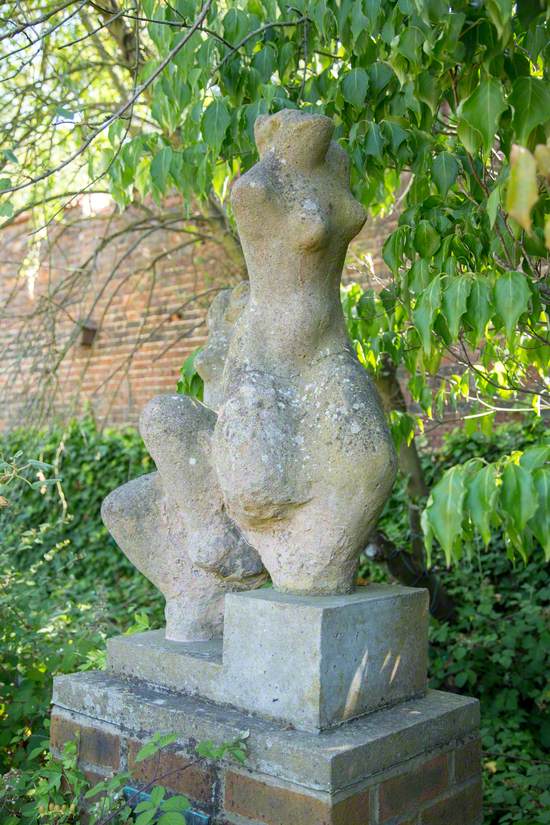 Like Nimptsch, Ehrlich and Goldschmidt, Karel Vogel was born in 1897. His family came from Budweisz, Czechoslovakia. He arrived in England in 1938 and later became Principal of the School of Sculpture at Camberwell School of Art.
Harlow Art Trust tells us that this ciment fondu sculpture 'was purchased from Vogel’s studio in 1955. It had been in Dr Vogel's garden by the river in Chiswick and he called it ‘Clouds’ ... Vogel is known for his portraits and figurative work and showed in London galleries, open-air park shows and the Festival of Britain.'
One of his most memorable pieces is 'Leaning Woman' near St Peter's Church, Hammersmith. 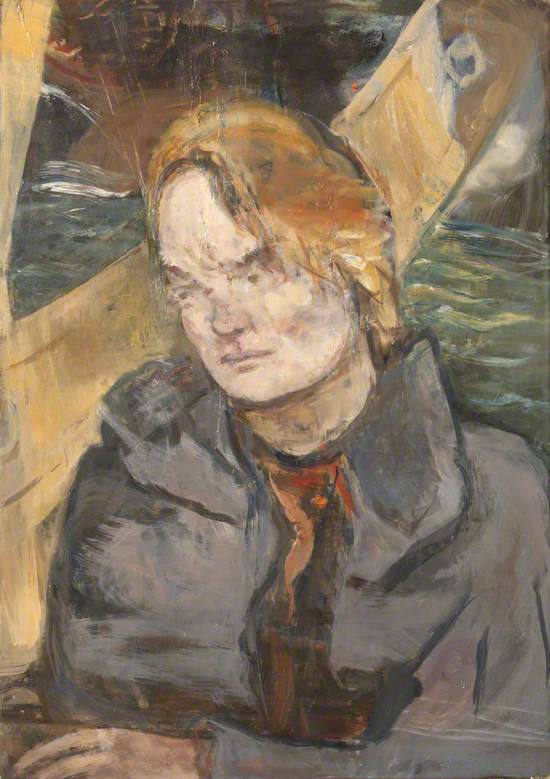 Iris Murdoch, Philosophy Fellow of St Anne's until 1964 and then Honorary Fellow

The youngest of the nine refugee artists in this curation is Marie-Louise von Motesiczky, born in Vienna in 1906. She studied with Max Beckmann but left Austria the day after the Anschluss with her mother. Her brother, Karl, remained in the family house helping Jewish friends but he was betrayed and died in Auschwitz in 1943.
Von Motesiczky settled in Amersham and after the war moved to London, where she mixed in artistic emigré circles. She was friends with Oskar Kokoschka, and the art historian, Ernst Gombrich, was an admirer of her work.
Iris Murdoch presented this portrait to St Anne's College when she resigned her Fellowship in 1967 to concentrate on her writing.