If you were ever to ask me where I'd rather be, Rome would almost certainly be the answer. I spent a year in the city 15 years ago – and during these strange months of lockdown, I've made plenty of pilgrimages back there in my mind. What follows is a selection of Roman views, diversions and digressions: a personal tour of Rome in the company of a few of the artists who worked there and the ghosts of some former visitors to the city. All the works are drawn from collections in the UK – so it's a Dolce Vita of dusty storerooms, a Roman Holiday of regional museums, and a Grande Bellezza of grand tourism. 'Nnamo! 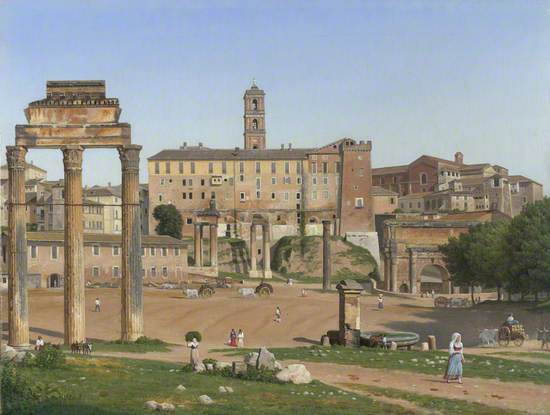 Plenty of tours of Rome start in the forum, so this one does too. Here's a view painted before much of the site had been excavated, looking past what remains of the Temple of Castor and Pollux (the giant cricket stumps on the left) to the Capitoline Hill. The Danish Golden Age painters, among them C.W. Eckersberg and Christen Købke, brought a crispness to Rome that I find appealing – somehow taking the heat out of the city. 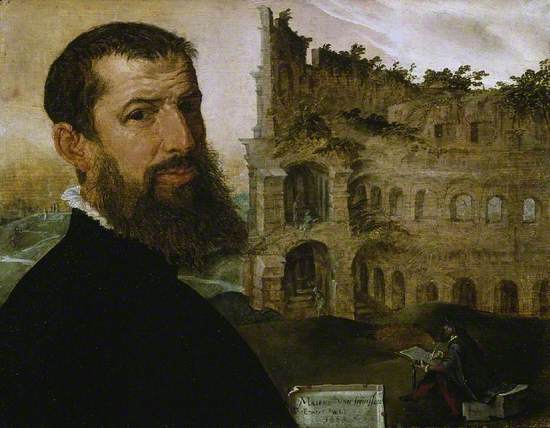 A forum for artists

If you looked the other way from Eckersberg, you'd see the Colosseum – one of the great subjects for the artists who have visited Rome over the centuries, unsurprisingly. The Dutch painter Maerten van Heemskerck liked it so much that he painted himself in front of it twice, once as a full-on portrait as if to prove that he'd been there, and once to pretend that he'd painted this picture in front of it (he didn't: the painting was made years after his return from Italy). 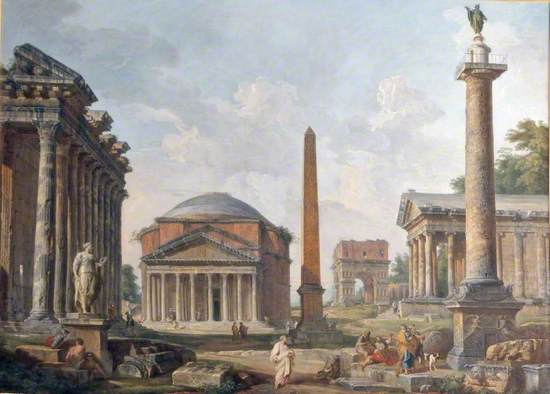 Build your own Rome

The ancient monuments of Rome are firmly rooted in their place. Plenty of them were buried in place, too, for centuries. But that hasn't stopped artists moving them around in imagined views of the city, often so that tourists could take some of the best bits home with them in a single painting. This capriccio by Panini has Trajan's Column, on the right, giving way to the Pantheon in the middle distance – a monumental fantasy. The greatest modern Roman capriccio, which owes something to paintings like this, is the ancient Rome film set cooked up out of fibreglass at the film studios of Cinecittà, on the south-eastern fringe of the city.

Another capriccio, this one imagining travellers approaching or departing Rome on the Appian Way, where the ancient Romans buried their patrician dead. It's as though Gulliver, in the giant kingdom of Brobdingnag, were strolling through a squadron of colossal pepperpots. 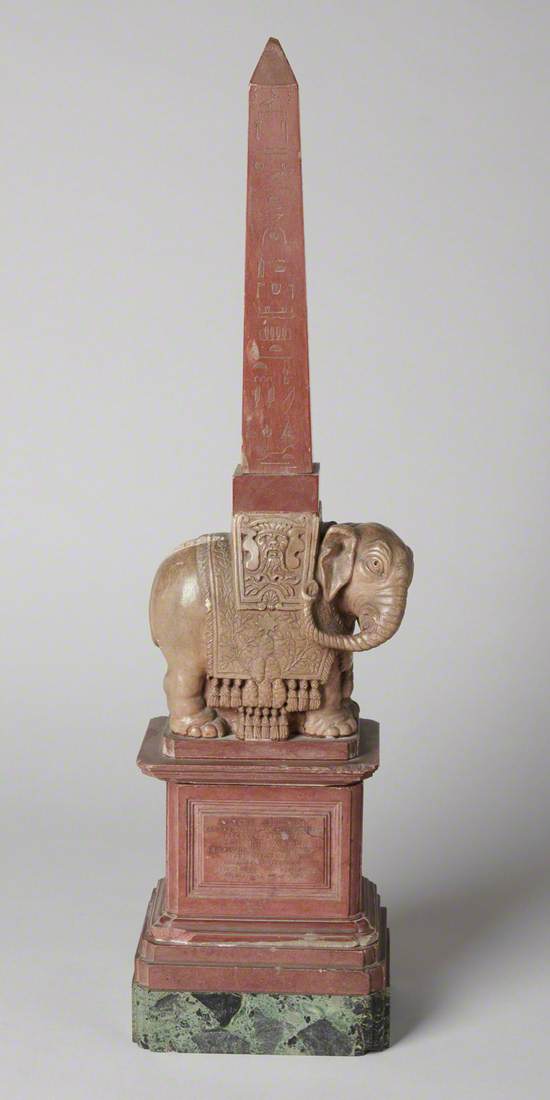 This miniature marble elephant loaded up with an obelisk reprises Bernini's needle-bearing pachyderm outside the church of Santa Maria sopra Minerva. A suitable trinket for a 19th-century tourist to bring home from Rome. It's more refined than the gladiator outfits and snowglobes containing the pope that you can buy today (you didn't, did you?) but of the same lineage, I reckon. 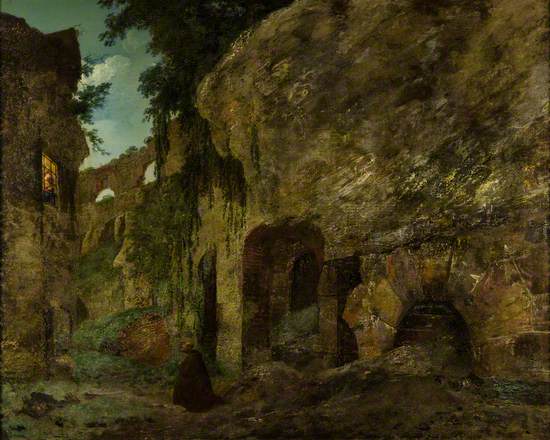 The ruins of Rome can have a life of their own. On a quiet night round the back of the Palatine Hill, or down near the Baths of Caracalla, it can all feel quite ominous – as it does in this Wright of Derby, down in the bowels of the Colosseum after dusk. The figure's prayers before a miniature Madonna, set in the wall above him, are dwarfed, unsettled even, by the craggy world that dominates them and surrounds him. 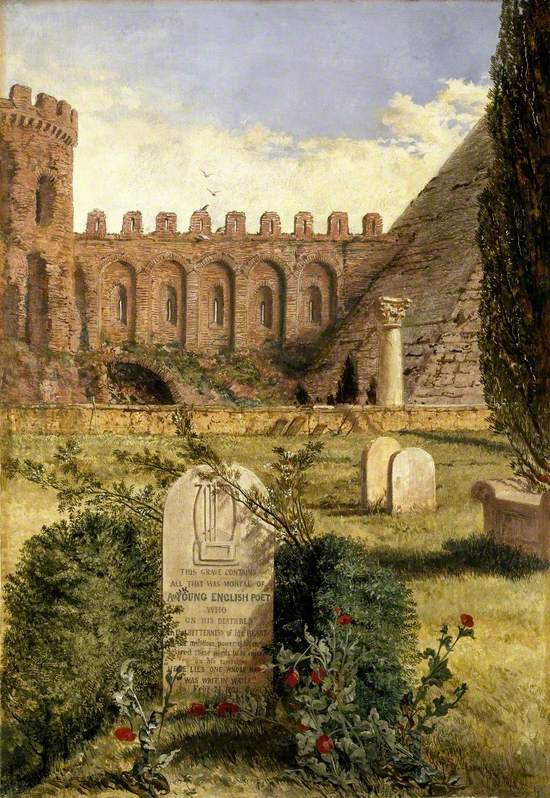 'Here lies one whose name was writ in water'. That was all that John Keats wanted inscribed on his tombstone, depicted here by William Bell Scott. (A verbose commentary, written by his friends, ended up on the grave – rather tarnishing the effect.) Keats died in Rome in 1821; unlike many other writers, he didn't come here to work, but for his health - or put frankly, to die. Keats's grave is a special place for me, as it is for many people, since I worked as a volunteer in the Protestant Cemetery (or more properly the Non-Catholic Cemetery) when I lived in Rome. It's one of the most peaceful places in the city, nestled just inside the Aurelian Walls and in the shadow of the great pyramid of Caius Cestius. 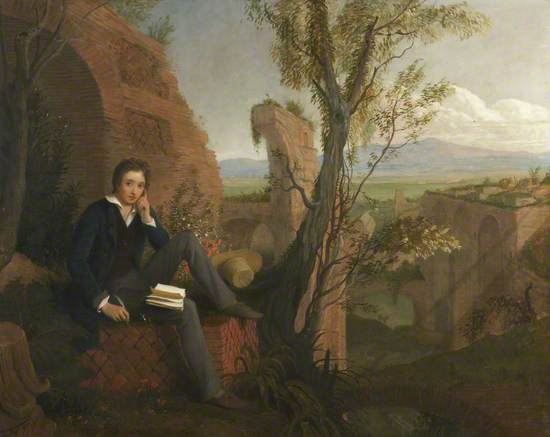 Shelley is buried in the Protestant Cemetery, too, although he died not in Rome but in a shipwreck of the coast at Viareggio. But he did write in Rome, striding out from his lodgings in the Via Sistina and later the Via del Corso to ruminate among the ruins and write swathes of his turgid 'lyrical drama', Prometheus Unbound. Much better is the unfinished Triumph of Life, a dream vision poem that takes its cue in part from the monuments in the forum. 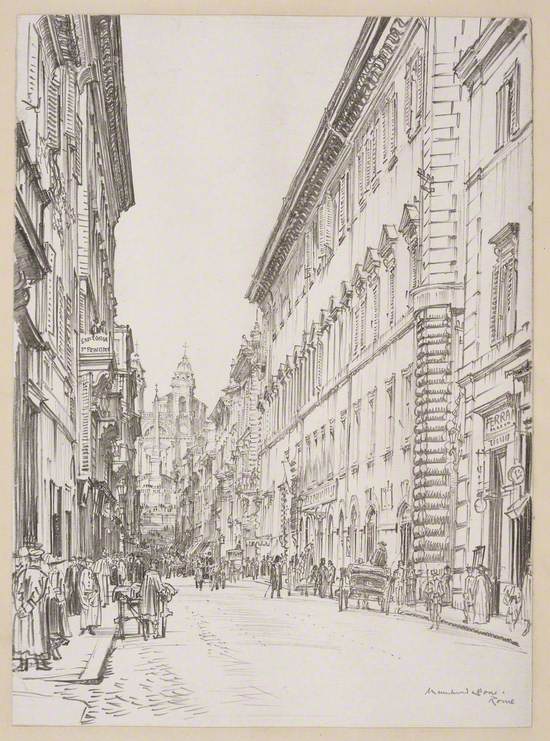 Muirhead Bone is best known as a war artist, but here he is in Rome, just before the First World War if the clothes of the passers-by are anything to go by. This is Via dei Condotti, which leads up to Spanish Steps and is now lined with Gucci, Dior, Bulgari and all the rest. In the 19th century, though, the streets around here were known as the English Quarter, in which everyone from the Brownings to Mark Twain and Henry James chose to stay for extended periods in the city. For a while James Joyce had lodgings at Via Frattina, around the corner from here, while he worked in a bank doing a job he hated. 'Rome reminds me of a man who lives by exhibiting to travellers his grandmother’s corpse,' he wrote. 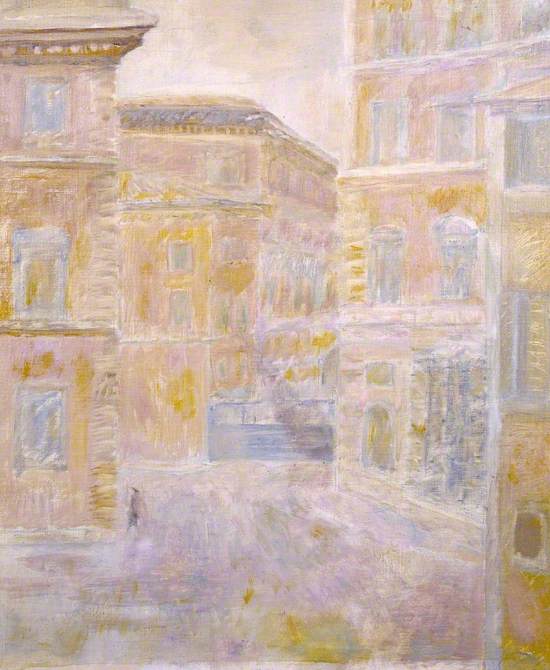 An odd palette this, for Rome - though not an unusual mood in recent months, when photographs of the city show its historic centre unnervingly empty. On Piazza Sant'Eustachio is one of the coffee bars that many locals and visitors swear by, Sant'Eustachio Il Caffè. The irony is that its coffee is served sweet, Neapolitan style. 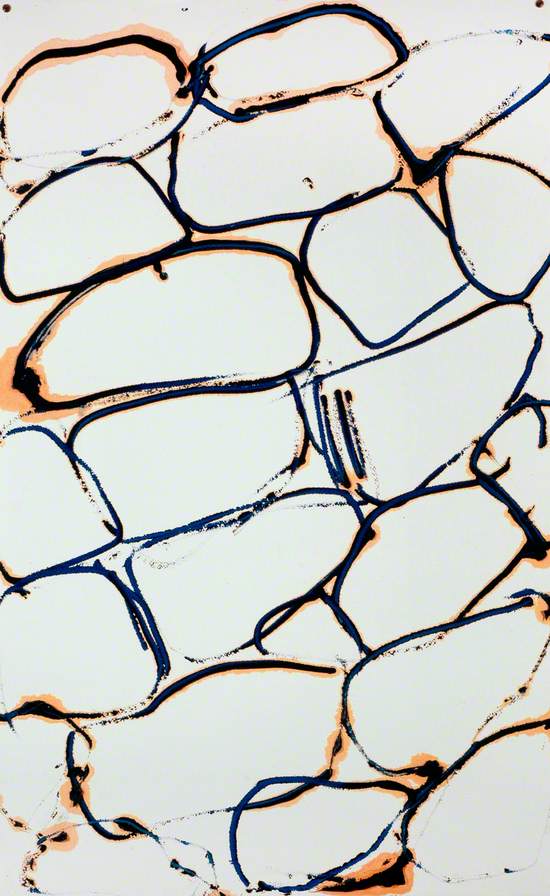 Any visitor who's walked through Rome will remember the weariness of tramping over its cobblestones for hours. They're known as sampietrini, or St Peter's little stones – and I'm fairly sure they're what Jannis Kounellis has in mind in this untitled drawing from 1999. The Greek-born artist moved to Rome in 1956, where he would become the Roman representative of the Arte Povera movement (another artist associated with Arte Povera, Alighiero Boetti, would cut and run from the north in the early '70s to avoid being too closely allied with it). Kounellis died in 2017; like Keats, Shelley, and many other illustrious dead, he is buried in the Non-Catholic Cemetery. 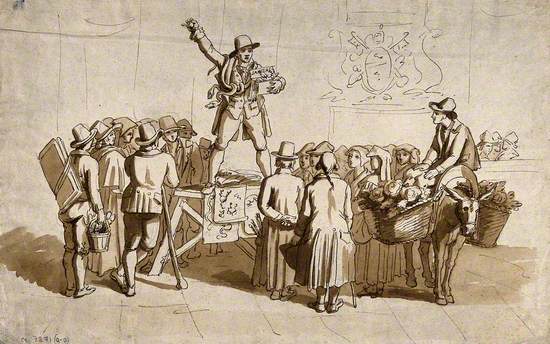 A chancer in the crowd

Many paintings of Rome overlook its street life, or depict it from a picturesque distance. But a Roman crowd has always been one of the great sights of the city. Here a huckster tries to flog snakebite remedies to a rapt audience. The scene is a little more orderly than the hubbub in the San Lorenzo district of an evening, or the Roma fans ragging their scooters through the city on a Sunday afternoon after a derby win against Lazio. But all the same, it's not a huge leap from here to the madcap melees of Fellini's Roma or the great neo-realist films of Roberto Rossellini and Vittorio De Sica. Whack Respighi’s Feste Romane (Roman Festivals) on the gramophone and turn the volume up to eleven.

A Salesman in Rome with a Snake Selling Amulets as Antidotes or Prophylactics against Snake Bites to a Crowd of People 1821
Bartolomeo Pinelli (1781–1835)
Pen & brown ink wash on paper (?)
H 24.5 x W 38.9 cm
Wellcome Collection 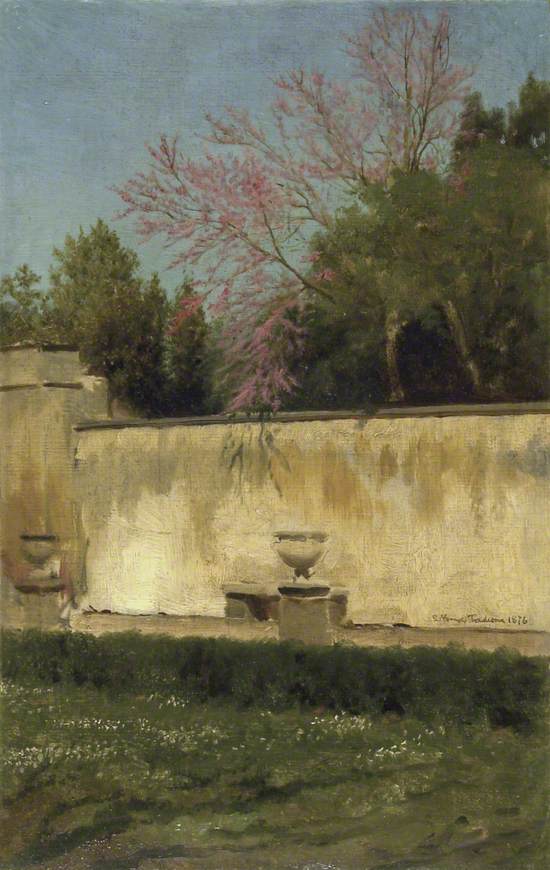 A quiet scene in the Borghese gardens. It's 1876, but this could just as well be 100 years earlier or a century later. I much prefer this little oil study to the grand antique fantasies with which Alma-Tadema made his name. For me this is Rome: ever fresh, ever jaded, always evocative. 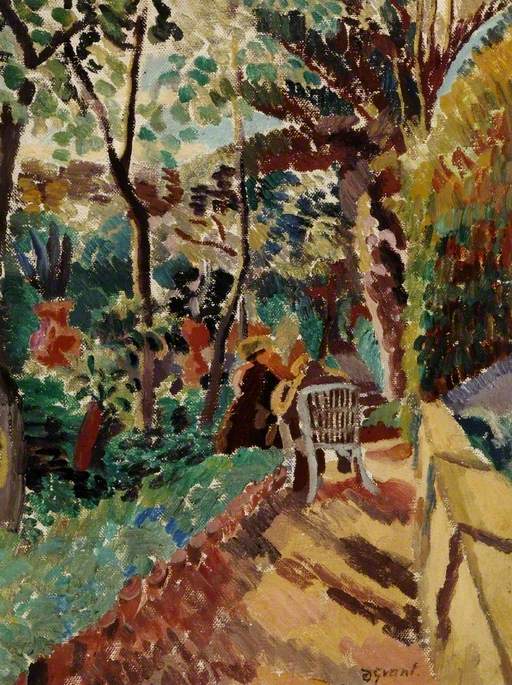 All roads lead to Rome

For the visitor Rome can be exhausting. But it's also inexhaustible, not only on the ground but also in the mind. I had no idea about visits to the city by the Bloomsbury Group until I came across this painting while searching for works to include here. It was painted by Duncan Grant while on holiday with fellow artist Vanessa Bell (his partner) and the economist John Maynard Keynes in 1920. The scene feels far from the centre of the city, although the Hotel de Russie is as central as grand hotels come here. A hidden Rome. 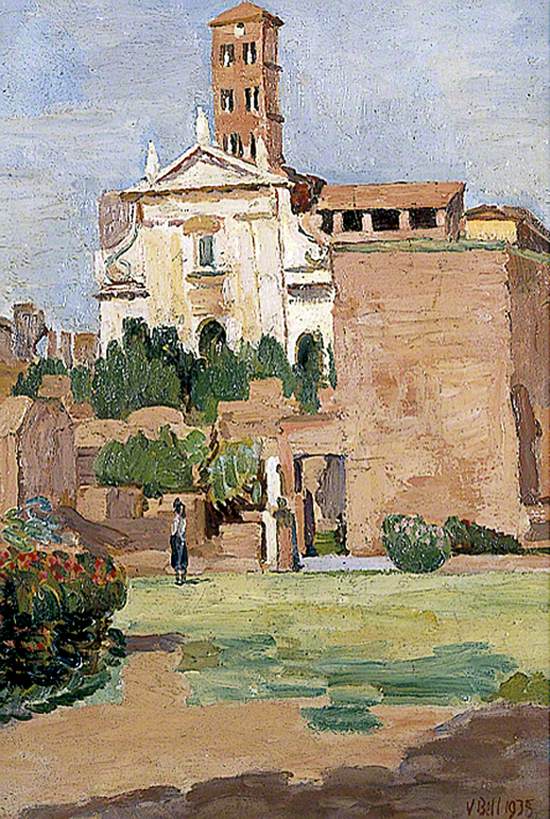 A return to the forum

Vanessa Bell was back in Rome in the summer of 1935. We are in the forum once again, but given an unusual view of it, looking towards the church of Santa Francesca Romana with its romanesque bell tower (did the artist intend the pun?). It feels more like a private garden than the heart of a fallen empire. Rome has been endlessly copied over the centuries, but also continually reinvented.

View all 16
View all