Close
It's been an odd spring under Covid. Almost no rain, but thousands of rainbows, in windows everywhere. Most of them are painted in what is now the canonical fashion; seven colours stacked from red at the top to violet at the bottom. Painted rainbows didn't always look like this: medieval artists mostly ignored the evidence of their eyes in favour of the best available scientific advice at the time (Aristotle), who had ruled that rainbows only had three true colours (with yellow as an optical effect). But the earliest rainbow in the Art UK collection, from around 1760, respects Newton rather than Aristotle, as do most of the others that follow.
Artists featured in this Curation: Julius Caesar Ibbetson (1759–1817), Joseph Wright of Derby (1734–1797), Joseph Mallord William Turner (1775–1851), John Constable (1776–1837), John Atkinson Grimshaw (1836–1893), Tom Phillips (b.1937) and Patrick Hughes (b.1939)
10 artworks
Storyline Album Showcase 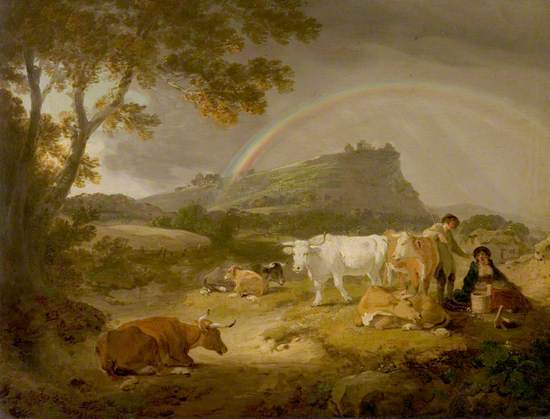 Julius Caesar Ibbetson was a self-taught artist who worked for many years as a picture restorer before establishing a career for himself as an artist in his own right. In later years he lived in the Lake District, where he became friends with both Coleridge and Wordsworth. This picture precedes Wordsworth's famous poem about a rainbow by 14 years but in its primary colour brightness it captures something of the effect Wordsworth describes; the capacity of a rainbow to make us look at the world as children do.

My heart leaps up when I behold
A rainbow in the sky:
So was it when my life began;
So is it now I am a man;
So be it when I shall grow old,
Or let me die! 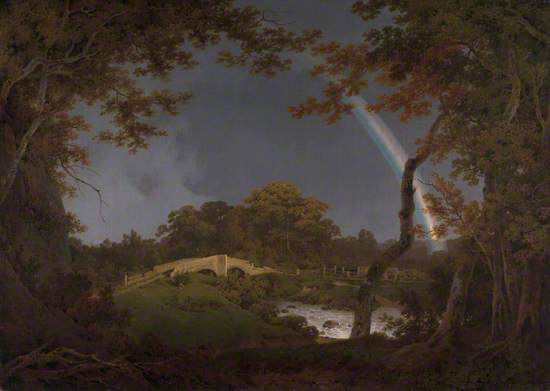 Landscape with a Rainbow

A rainbow from an artist self-consciously bent on giving enlightenment a visible form, whether in his pictures of candle-lit scientific experiments, studies of moonlight or incandescent technology. This isn't a religious rainbow, it's a Newtonian one, but Wright can't entirely shake off the subject's inherited sacramental aspects. His rainbow springs to form a vaulted arch with the tree branch on the other side, both of them framing the tree at the centre - accurately lit by weak sunshine from directly behind the artist's head - and the man-made bow of the bridge beneath. 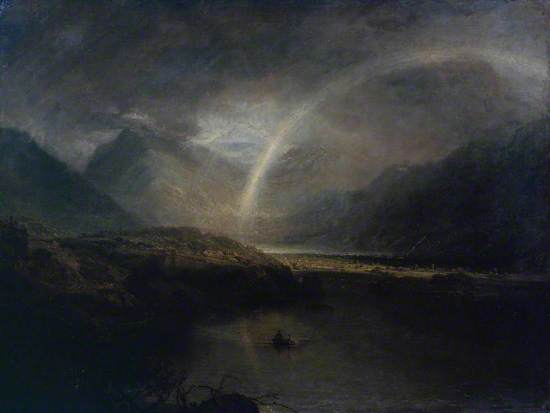 Buttermere Lake, with Part of Cromackwater, Cumberland, a Shower

Like Wright Turner revels in the contrasts of light and dark that so often accompany rainbows in nature. His notebook sketch for this painting has the word 'Black' scrawled across the surface of the lake, though in finishing the work he includes a reflection of the left hand arm of the bow in the still surface of Crummockwater in the foreground. And this is not a Newtonian rainbow but a Burkean one, aiming at the aesthetic sublime, an emotion in which awe and dread are mixed. Almost entirely drained of colour, Turner's arch of light is more halo than rainbow, but a halo that arcs around sacred nature, not a holy figure. 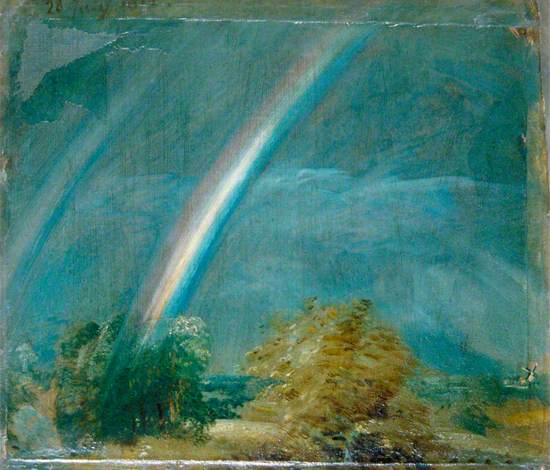 Landscape with a Double Rainbow

Constable paints rainbows many times - in sketches and watercolours and finished oils - but this is one of his most vivid. And this is definitely a Newtonian rainbow - marking out the seven bands of colour to which Newton had reduced the infinitesimal spectrum (largely because he wanted it to match his ideas about musical concordance). "Why then may not landscape painting be considered a branch of natural philosophy, of which pictures are but the experiments", Constable had asked in a lecture to the Royal Society in 1836. This picture is one answer to that question, anticipating Keats' fear that Philosophy would "unweave the rainbow" and effectively repudiating it. Beauty, as Keats should have known, has nothing to fear from truth. 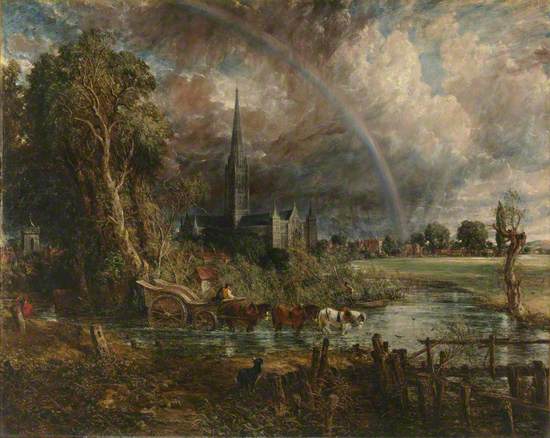 Salisbury Cathedral from the Meadows

And, should you want your rainbows unwoven, what about this one, in a picture Constable thought of as one of his best? It was almost certainly a later addition to the painting and the meteorologist John E Thornes has made a detailed case that its size and position in the painting (impossible under the conditions depicted) was used by Constable to encode the time and date of the death of his close friend John Fisher. I'm not entirely convinced myself, though Thorne offers plentiful evidence that Constable fully understood the optics of rainbows (you can find his fascinating essay on the Tate website). But that it meant something profound to the painter, beyond atmospheric decoration, can't really be in doubt. 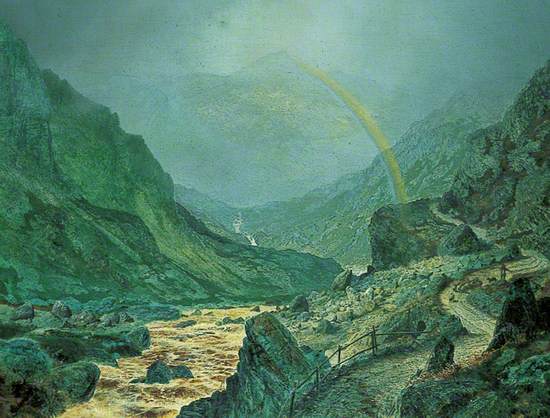 The Seal of the Covenant

After all those secular rainbows, an unabashedly religious one, in an unrepresentative painting from an artist best known for his urban nocturnes and twilights and moonlit scenes. The road is undeniably rocky and steep, the river appears to be uncrossable, but that rainbow stands as a divine guarantee that God will never let the flood overwhelm you. Oddly, given Grimshaw's control of lighting effects, it's among the least convincing rainbows here, the light just too drab and even to make it match up to the promise of the painting's title. Piety dulls rainbows. 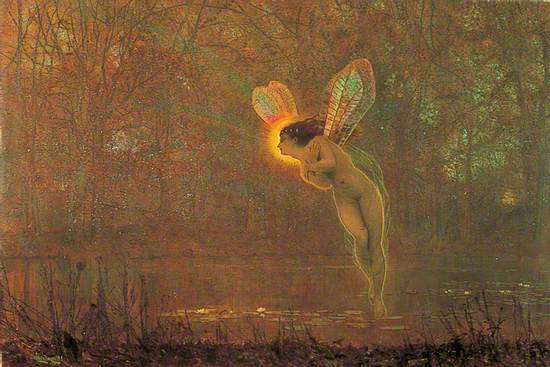 This doesn't look like a rainbow at all, until you look closer at the iridescence in the figure's wings and remember - or like me learn for the first time - that in Greek mythology Iris was the personification and goddess of the rainbow. This is a rather twee avatar of the deity, though no doubt well aimed at Victorian tastes. It's possible that Grimshaw had in mind Virgil's description of Iris in the Aeneid: “saffron-winged, sparkling like dew and trailing a thousand colours as she caught the light of the sun”. Possible too that Virgil wouldn't have seen eye to eye with Aristotle when it came to the science of rainbows.

Concorde: Walden I and Walden II

Unwoven Rainbow No II. Tom Phillips' painting depicts (in the left hand panel) a group of people in a Bristol field watching a Concorde test flight. The chromatic bar code that frames the representational images is formed from the unmixed paint used to create them. But Phillips then adds natures colour chart in the landscape on the right. Two rainbows, impossibly located side-by-side. And strangely, when you look closely, the green seems to have drained from those two rainbows into the fields below. 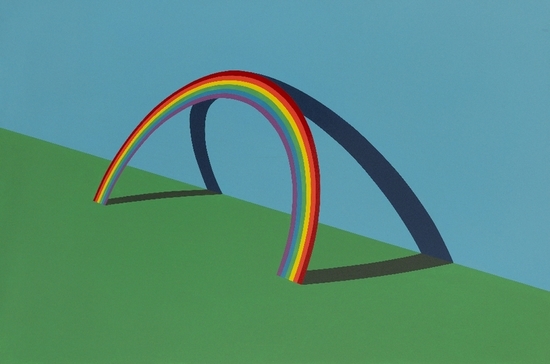 Leaning on a Landscape

Patrick Hughes reminds us of a truth about the rainbow that it is easy to forget. That it isn't actually an object in the landscape at all, but a fall of light on the retina of the observer. That's why you will never reach the pot of gold at the end of the rainbow and why you can never come at a rainbow sideways. Constable understood this well: the rainbow, he wrote, must always "be parallel with the plane of the picture". Hughes breaks this rule, making the gauziest of natural phenomena solid enough to cast a shadow as it leans against a wall. And making a sky that's solid enough to be leant against. 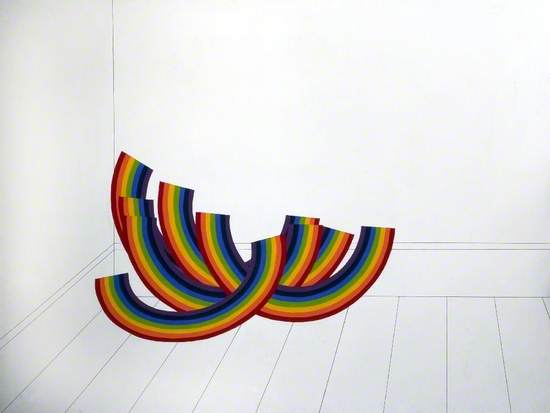 It's part of the glory of a rainbow that we know it will disappear. That's why this is funny, I suppose. Rainbows seen as rubbish, as something that needs to be cleared up. But also rainbows that appear to have corralled all the colour in the room, leaving only black and white lines behind them. The rainbows in windows will have to come down too, eventually. And one wonders a little what will happen to the values they represented - whether they were posted as a gesture of neighbourliness towards local children or as a tribute to the NHS. One hopes they don't just end as clutter and scrap paper.