Close
In Summer 2019 new potatoes grown in Ayrshire - ‘Ayrshire Earlies’ - were awarded prestigious Protected Geographical Indication status, meaning that from May 2020, they can be specifically marketed as such. This new branding assures customers that they are buying the genuine article; not just a small salad potato but one that has the superior taste - and heritage - of a true Ayrshire tattie. See our tattie blog here: https://wp.me/p2csKB-l4

But what about tatties in Art? There are actually no works of art in the South Ayrshire collection relating to potatoes- but there are 42 on this website!
Settle down for feast for the eyes - enjoy! 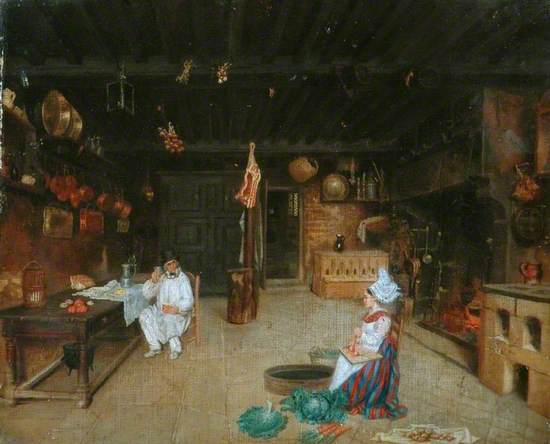 This is the earliest dated oil painting featuring potatoes on the Art UK website, and indeed Ayrshire has been at the heart of the Scottish - and UK - potato industry since the cultivation of the crop was first reported on a commercial basis there in 1793.

In 1875 Mr Quinton Dunlop of Morriston Farm, Maidens, mixed business with pleasure, and visited the Channel Isles with Mr Hannah of Girvan Mains. Their business was to observe the early development of the potato harvest there. After extensive enquiries, Dunlop decided that conditions at Morriston were just as favourable for growing the early potato as Jersey. 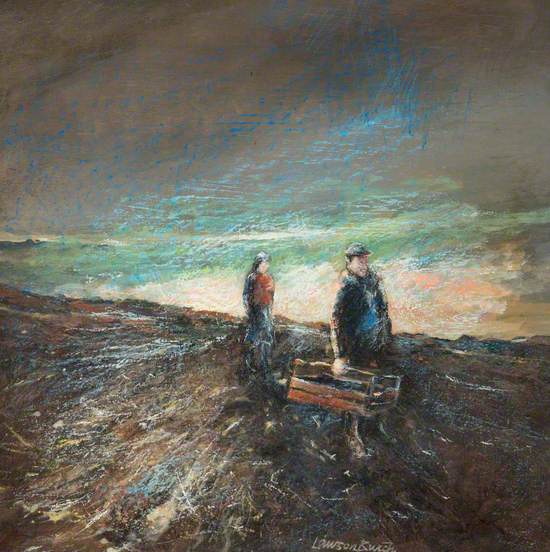 Another innovative step was taken in 1880, when Mr John Wood of Chapeldonan, Girvan, experimented successfully with ‘chitting’ or sprouting potato tubers. The extent of both earlies and main crops now produced in Scotland stood at 10,993 acres.

The following year, Mr Thomas Hunter, Senior, implement maker from Maybole, visited a farm in Cheshire and observed the use of wooden chitting boxes. On his return home, he had one made and demonstrated it to Mr Hastings of Jameston Farm, Maidens who introduced the new method to Ayrshire 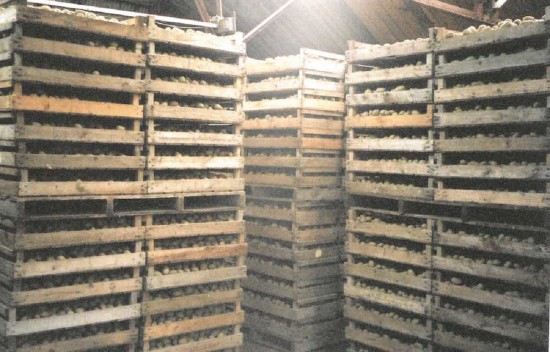 The wooden seed boxes are very much still in use, carefully storing the tattie seeds until its time to plant! 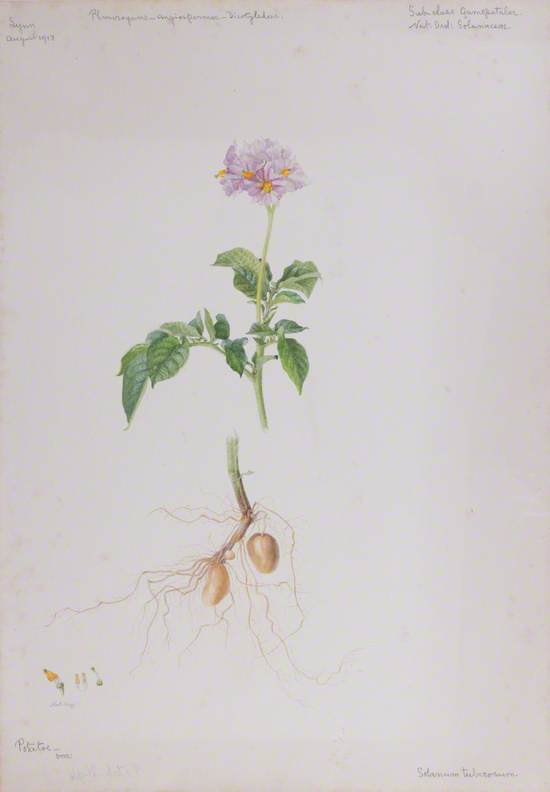 The humble potato is often elevated to a thing of beauty by botanical artists - many early books describing the plant and the farming techniques, feature watercolours showing the delicate flower, bright green leaf, and different aspects of the tuber. 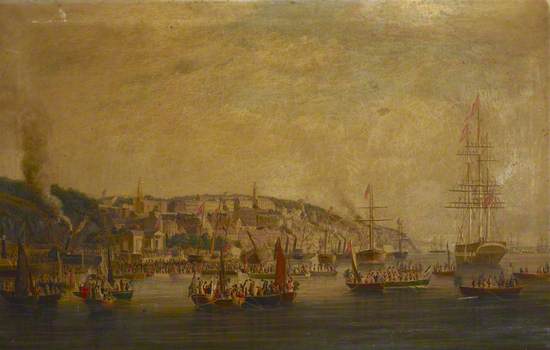 The role the potato has played in the history of Ireland is immense, and the impact of the Irish workforce on Ayrshire has created a lasting memory.

From the 1890s workers were employed by potato merchants, who acted as labour contractors. They recruited large numbers of workers for a number of months – and moved them throughout Ayrshire, and across Scotland.

Workers were recruited from local towns and villages – as well as from the larger urban areas of Glasgow, Paisley and Greenock. of the harvesting labour force. A key group were Irish migratory workers – “tattie howkers” – recruited from districts of north and north-west Ireland, principally the counties of Mayo and Donegal.

Soil types can be expected to vary from field to field, sometimes within fields, and growers strive to understand them and how to get the most from them.

Science & Advice for Scottish Agriculture (SASA) is the certifying authority for seed potato production in Scotland, with all stages of production under official government control. The work carried out by SASA and Scottish Government inspectors ensures the continuing high quality of Scottish seed potatoes so that we can all continue to enjoy eating potatoes (especially Ayrshire earlies!) as part of a healthy diet. 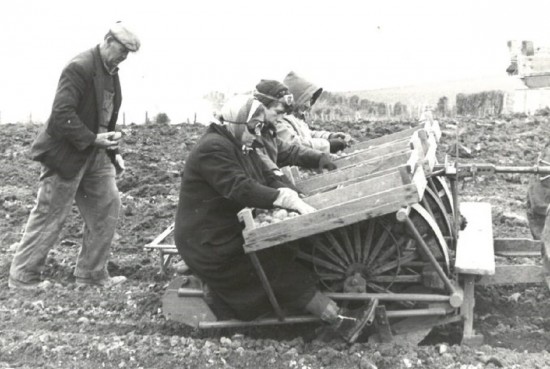 ‘Ayrshire Earlies’ are young, and so they are sensitive! They need to be handled with care, indeed many farms still hand planting today. Its labour intensive – but, it ensures the bud remains intact - it’s worth it!

The workers in this painting are strikingly similar to the ones in the photograph above, showing the teams of planters at Houdston Farm, Girvan, with their headscarves, belted coats and boots. 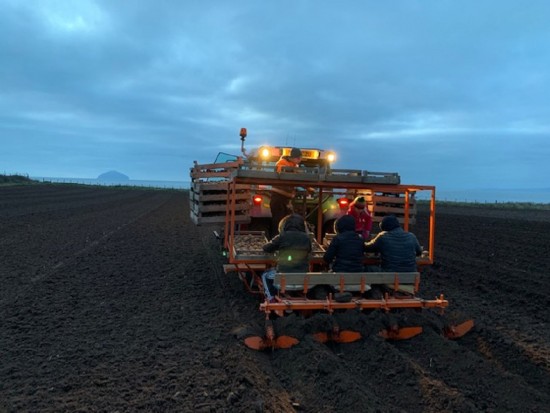 Ayrshire new potatoes are still planted in a very similar way - that is, with coats on and hoods up! 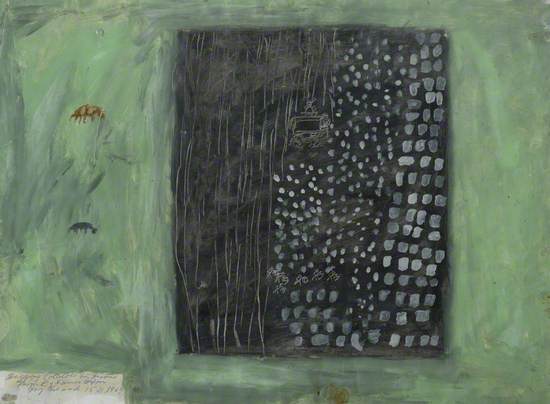 The potato field in the landscape is familiar to rural communities - however, some consumers do not realise that Ayrshire tatties need to be grown in Ayrshire to be labelled as such. The PGI status considers and defines the region of Ayrshire in the West of Scotland as being within the geographic Local Authority boundaries of North, East and South Ayrshire Councils. The county of Ayrshire is bordered on the west side by the Firth of Clyde and extends from the coastal locations of Skelmorlie in the north to Ballantrae in the south, and to Glenbuck in the east. The county also includes the Isle of Arran and the Cumbrae Isles. 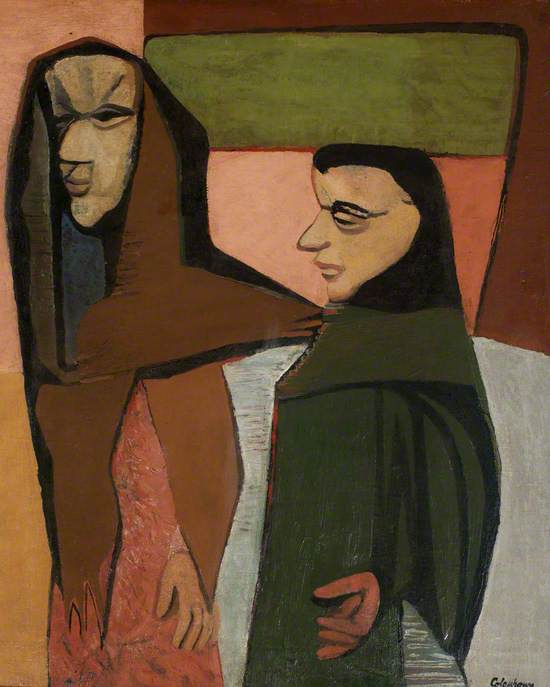 The clothes and demeanour of the workers - quiet, serious, focussed - inspired many, including Colquhoun. Born in Kilmarnock, his companion Robert MacBryde was also born in Maybole - both from Ayrshire, they would have been familiar with the sight of the tatties in the field, and the superior taste of early new potatoes. 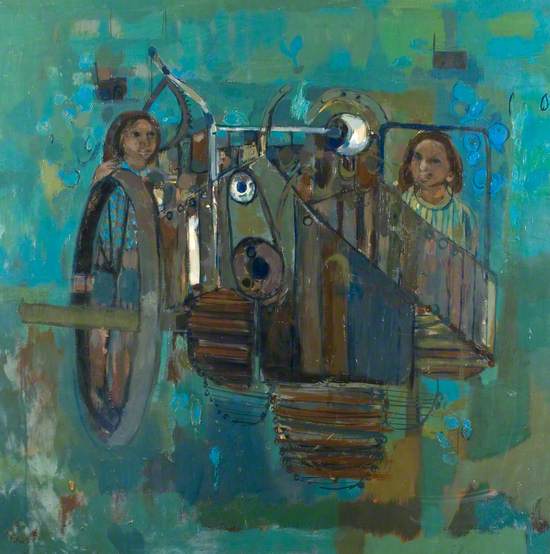 Today, most reminiscence surrounding tattie production, is from people who worked in the fields as children.

"As a child i remember the ‘tattie howkers’ visiting Greenan Farm, at Doonfoot Ayr, where my grandfather lived and I was always fascinated by them. Boiling up tea in a metal can, singing and laughing as they worked and cooking around a camp fire at night, and sharing amazing stories of their adventures as they travelled around Scotland. I can still taste that rich earthy mineral taste of 'ayrshires'". 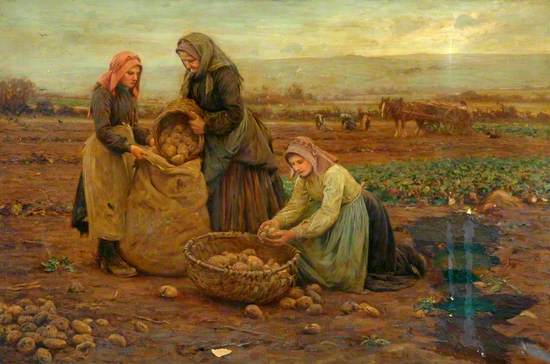 The workers were a close-knit community – they knew one another, many were family. They were supplied with accommodation, blankets, cooking utensils and potatoes (which formed a large part of their diet) by their contractor. They were usually housed in existing buildings at the farm steading or in specially erected buildings. They had hay or straw for bedding and fuel. 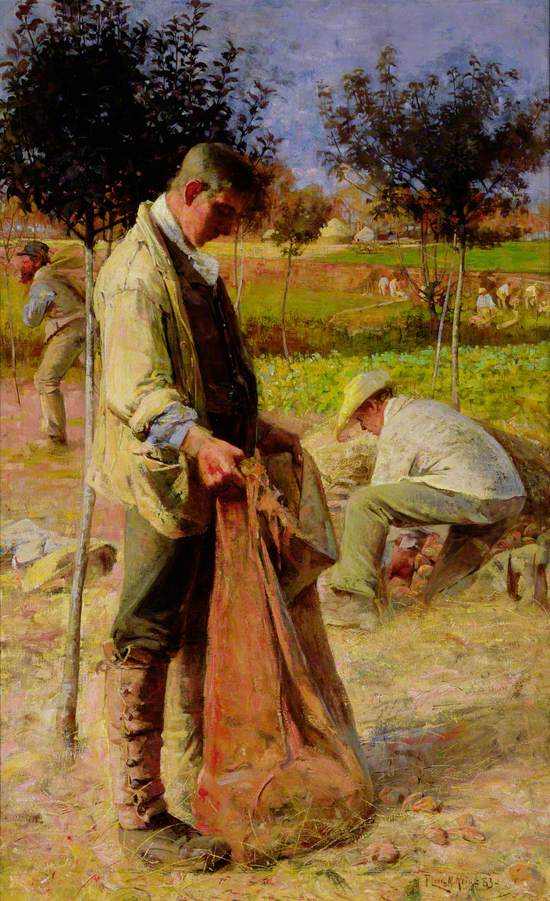 Many of the romantic scenes of field work, feature men as the main subject - but the planting and harvesting of this crop involved a lot of women - indeed they feature in photographs. 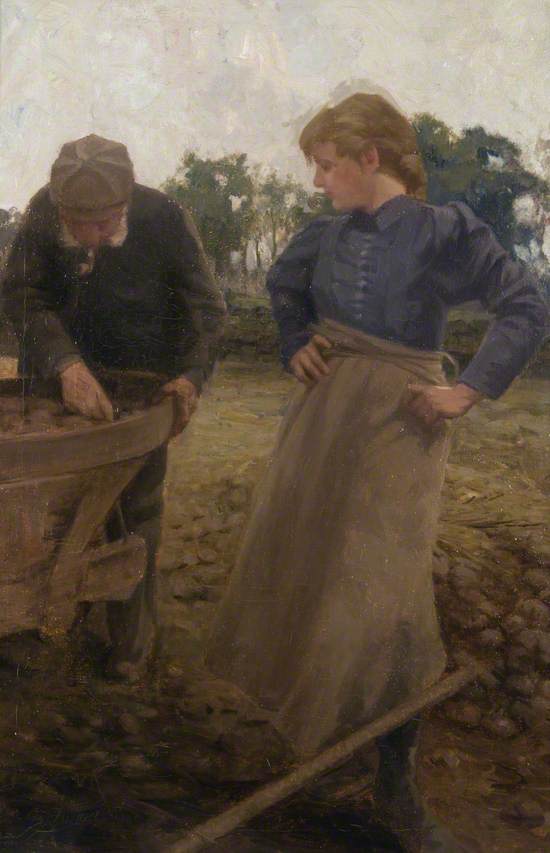 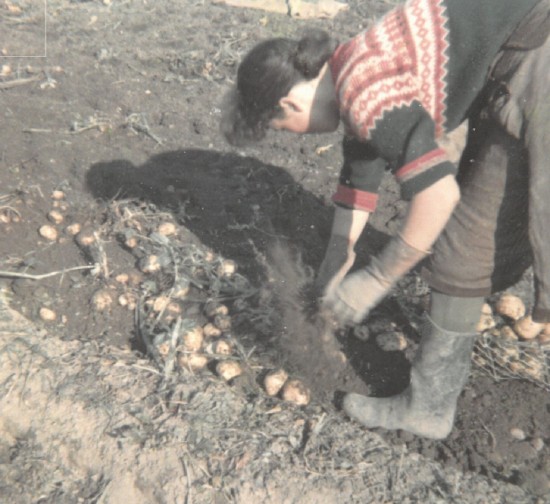 Actual photographs of the picking show people stooped, low on the ground. The sun is always shining. 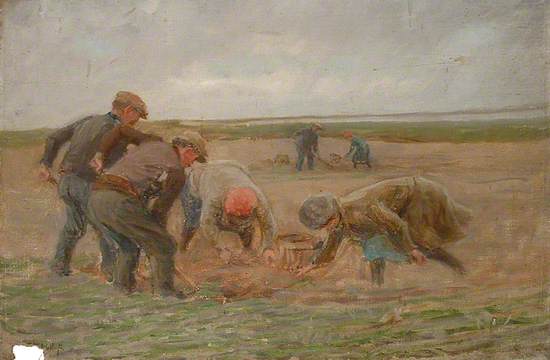 The harvested potatoes were handled with great care; the potatoes couldn’t be allowed to rub against one another, as the skins were so soft. The usual custom was to take the newly dug potatoes down to the railway that same evening, so they could be transported during the cool of the night to where they were to be consumed. Now, Dowhill Farm, Girvan dig their Earlies fresh each day, at 3am in the morning! Ayrshire’s new potatoes are precious cargo indeed!

Of all the potato paintings available on Art UK, this is the one we would've chosen to include in our exhibition. Its not surprising that Joan Eardley, whose observation of both urban and rural Scottish life was so insightful, chose to paint potato sacks in the field. This powerful but simple work elicits memories - one of our contributors to the exhibition remembered sewing up the tattie sacks - embroidery also one of their skill sets. 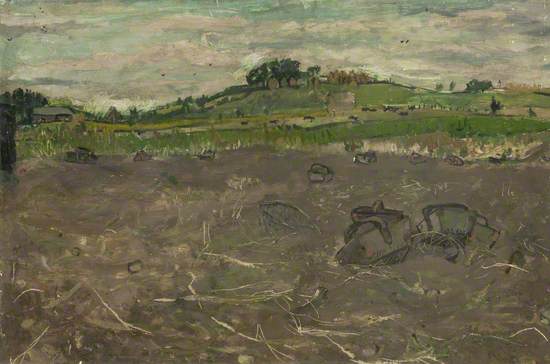 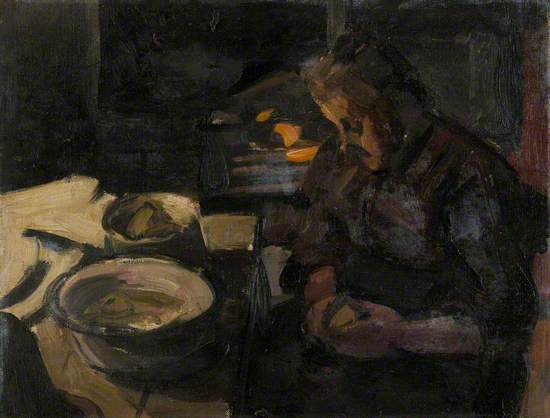 Those in the know, will tell you that ‘Ayrshires’ have a particular flavour. The milder climate and sandy soils of the West Coast gives them a unique fluffy skin and flavour, compared to potatoes harvested later. The skin is soft enough to be rubbed off. The taste has been shaped by particular varieties and fertiliser.

In 1894 varieties such as ‘Superbs’, ‘Sutton’s Regents’, ‘Puritans’ and ‘Jubilees’ were recognised as being amongst the ‘best and earliest varieties’. But there was one variety that came to dominate all others: the ‘Epicure’. 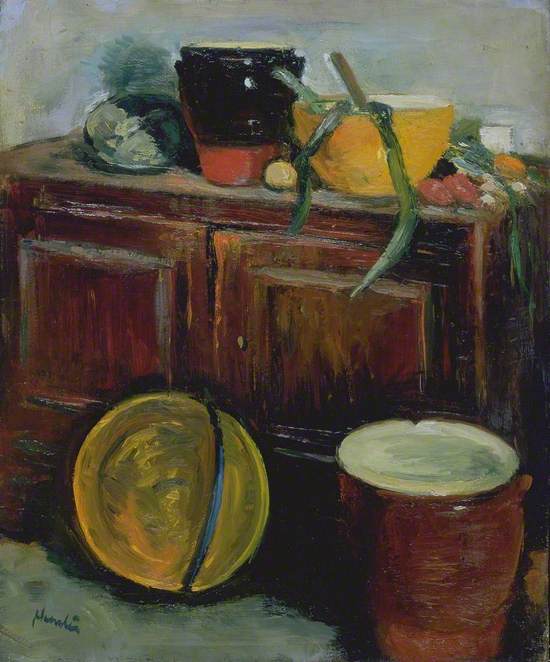 Critically acclaimed for his treatment of light and the effects of light, here Hunter lets his single tattie take centre stage.