Philippe Sands QC is professor of law at UCL and a barrister at Matrix Chambers. He is the author of 'East West Street' and 'The Ratline: Love, Lies and Justice on the Trail of a Nazi Fugitive.'

The themes of migration and justice play an active role in my life. They often connect, and seem to touch the lives of artists who have reached the United Kingdom.

Continue scrolling to find out more.

Josef Herman left Poland in 1938, at the age of 27. He hoped to escape discrimination, and after two years arrived in Britain. In 1943 he painted Where to Now?, which resides at The Ingram Collection of Modern British and Contemporary Art. A mother and child together. Is it a final moment? I think of my mother, separated from hers at a train station in Vienna in the summer of 1939. It could be Idlib or Cox's Bazaar in our times. The image, and the emotions evoked, are universal. 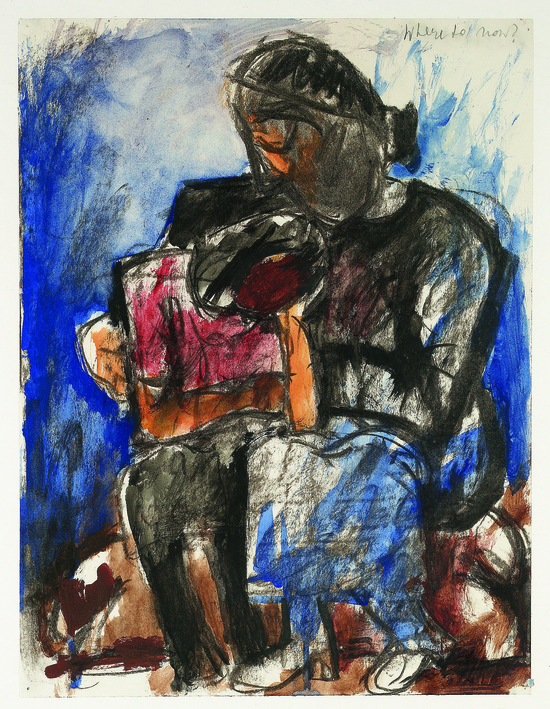 Three years after Herman completed his work, Laura Knight travelled to Germany, to attend hearings in Nuremberg's Palace of Justice. This was a moment of creation, the application of new ideas for international justice. It encompassed the crime of 'genocide', for the protection of groups, and 'crimes against humanity', for the rights of individuals. The legal terms were created by Rafael Lemkin and Hersch Lauterpacht, migrants who hoped that international rules might offer protections against atrocity, a story I describe in my book East West Street. In Courtroom 600 they prosecuted Hans Frank, without knowing he was responsible for the murders of their own families. 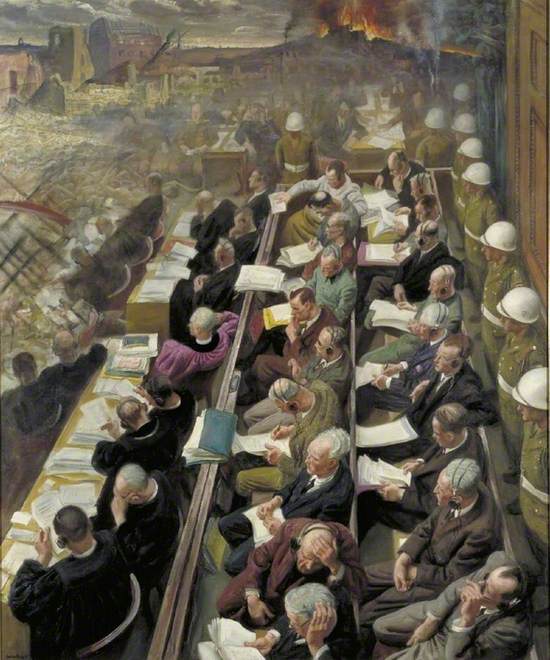 Knight captured the moment, and the men, in The Nuremberg Trial. It is in the collection of the Imperial War Museum, whose new Second World War gallery, to be opened next year, will honour Lauterpacht and Lemkin. Knight captures the defendants, and the mayhem and horrors for which they were responsible. This painting embodies the possibility of justice, and that precious and revolutionary moment of creation, and of hope.

Frank Bowling was born in Guyana in 1934, a child of British colonialism. The establishment of the United Nations in 1945 heralded a process known as 'decolonisation'. Five years later Bowling arrived in Britain where, in 1968, he painted Who’s Afraid of Barney Newman, now at the Tate. Guyana had recently gained its independence, and the work depicts the newly independent country's flag. 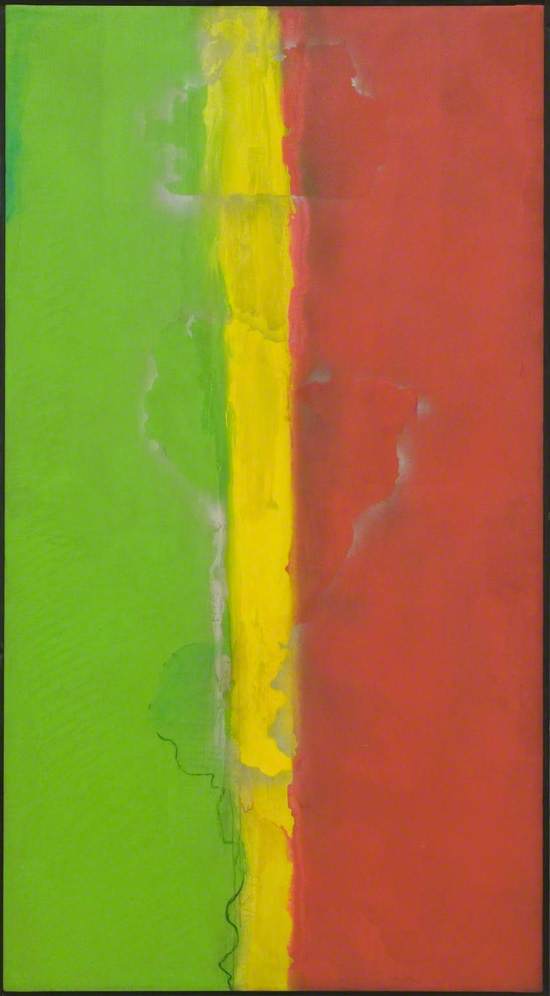 Who's Afraid of Barney Newman

More than five decades later, Guyana remains in a dispute with Venezuela, its neighbour, which, in the context of decolonisation, claimed half its territory. The case has reached the International Court of Justice, where I act for Guyana, a country I have come to know and love. This painting evokes, in that context, the long arc of justice, ideas about self-determination, the right not to be oppressed.

In 1939, Frank Auerbach travelled from Germany to Britain on the Kindertranport. He was seven years old. Many of his works are painted around Camden, in London, where he lives. This reminds me of the importance in our daily lives of local places, and emphasises the consequence of rupture. There were many paintings I might have chosen, but I have settled on 'St Pancras Steps, Station', painted in 1978, now at Touchstones Rochdale. 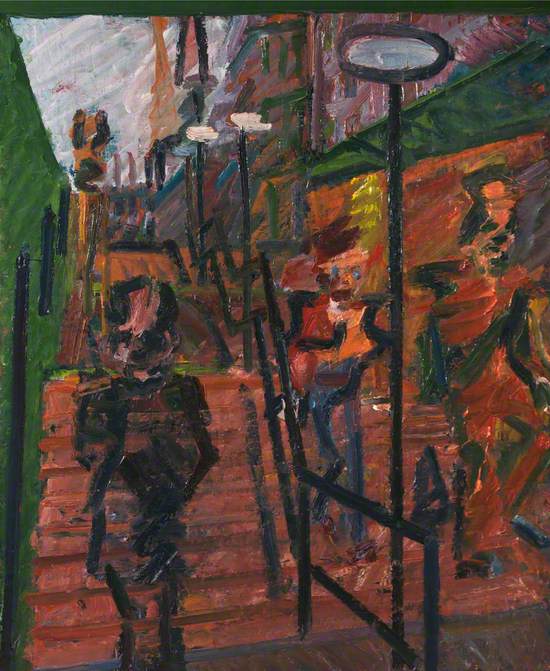 I would often come to this station, and sometimes take these steps, to visit my father, who worked as a dentist at a surgery on the Caledonian Road. We would spend time at the deli next door, run by a lovely man from Italy. I think I may have had my first espresso there, and tasted parmesan cheese. London's wonder includes its embrace of others, and their foods.

I happen to live in Camden, in a house bought many years ago from the family of Milein Cosman. She was born in Germany, and arrived in Britain in 1939, aged eighteen, where she enrolled in the Slade School of Art. She became well known through her drawings of musicians and composers, many of which can be seen in the basement restaurant of the Wigmore Hall. She was married to Hans Keller, the musicologist, who came from Austria after being tortured by the Gestapo. The room he worked in at home is the one I now occupy. 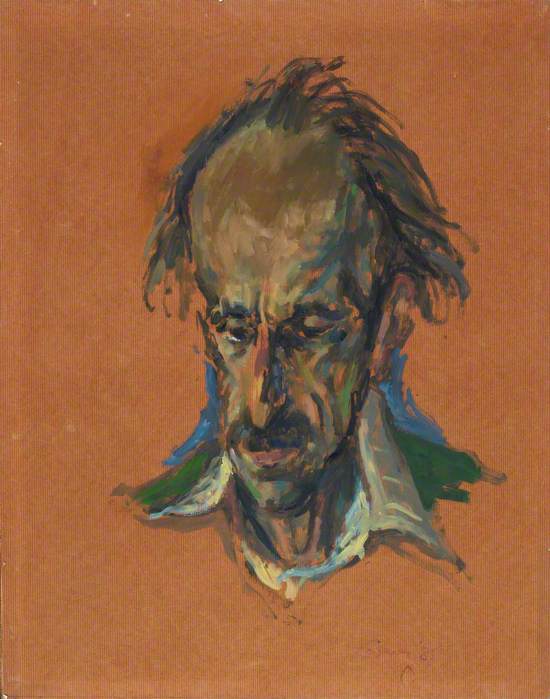 Milein painted this portrait of Hans in 1985 the year he died, and is now at the Fitzwilliam Museum in Cambridge. Milein lived for three decades, so we came to know her, and love her. A diminutive figure, she would bob up and down as we talked. Her zest for life was, and is, infectious.

In writing the book about Lauterpacht and 'crimes against humanity', I was assisted by his son Eli, who taught me international law. On one occasion, in his office at home, he showed me a portrait of his wife, commissioned from Maggi Hambling. Several years later, Stephen Fry interviewed me about the book, at the Hay Festival. In the course of the conversation, I learned, unexpectedly, about his central European and migratory ancestors. It was an immensely moving moment. Recently, he has made the audio version of my new book, The Ratline. 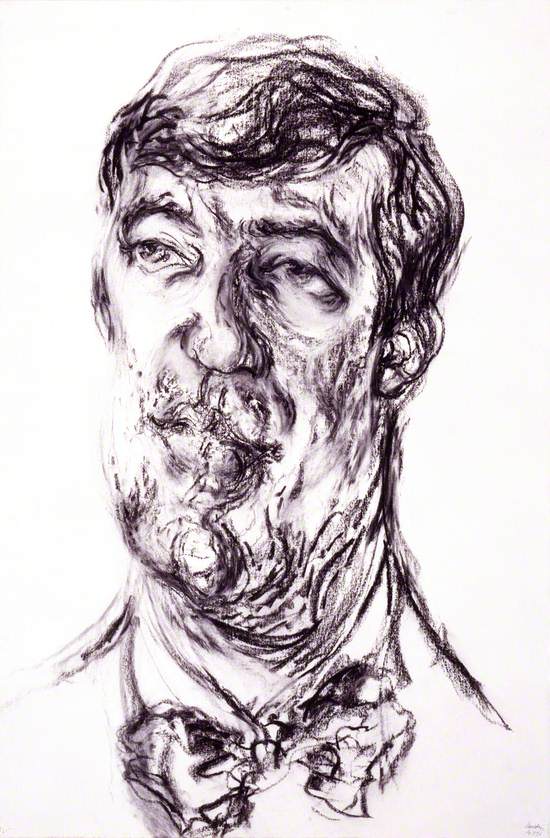 It seems like a happy coincidence, or something else, that Maggi Hambling should have drawn him in 1993. Painted in 1993, and now at the National Portrait Gallery, this was the year that the idea of international criminal justice flickered back into life, after five decades of quiescence following the Nuremberg trial, with the creation of the international criminal tribunal for the former Yugoslavia.