What on earth is a 'mystic marriage' and why were they such popular subjects in Renaissance painting? 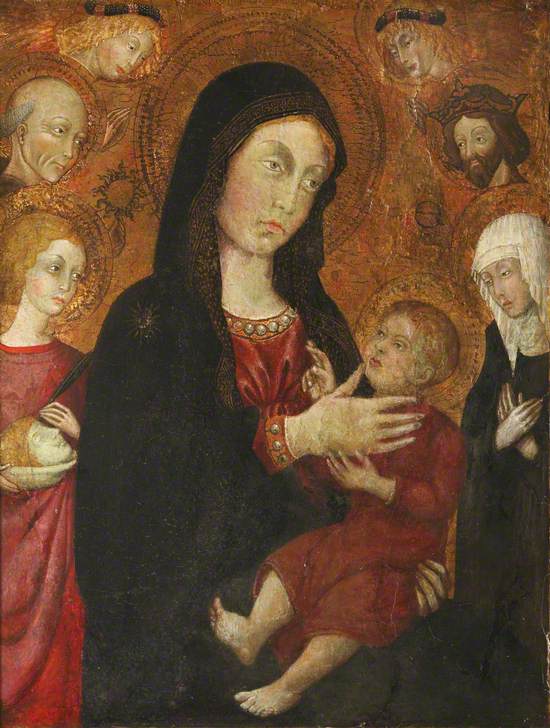 Madonna and Child with Saints and Angels, 1400s

At first glance, this image, originally from 15th century Italy, seems inconspicuous. We've got a Madonna, an infant Jesus, & various figures surrounding them in adoration.

But a closer look provokes some questions. Who's the woman on the left, casually holding a head? Probably Judith, who saved her town by seducing & beheading a man.

Then on the right, we see a woman in the black & white habit of a Dominican nun, St Catherine of Sienna. She's often depicted close to Christ, because, well... she's said to have married him.

Sure, she was a nun. Plus, she was born about 1,310 years after Jesus is supposed to have died, risen & ascended. So what does this kind of marriage mean? 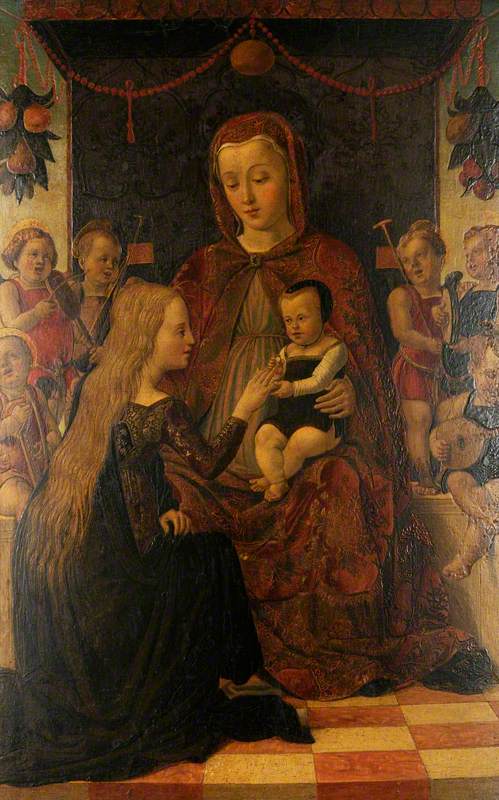 The Mystical Marriage of Saint Catherine of Alexandria, c.1470

Here, we see the Madonna & infant Christ again, with a different Saint Catherine, Catherine of Alexandria, supposedly born c.300AD. Her untied hair & small figure show she's still a child herself. The garlands & the crowds of cherubic figures with music instruments indicate that this ia a marriage.

No, Catherine didn't time travel. This is an event in a spiritual realm. The story goes that Catherine experienced visitations from Mary & Jesus from a young age, convincing her to stand up against the persecution of Christians by Emperor Maxentius. When he couldn't torture her, he proposed marriage to shut her up. She replied that she was already married to Christ. 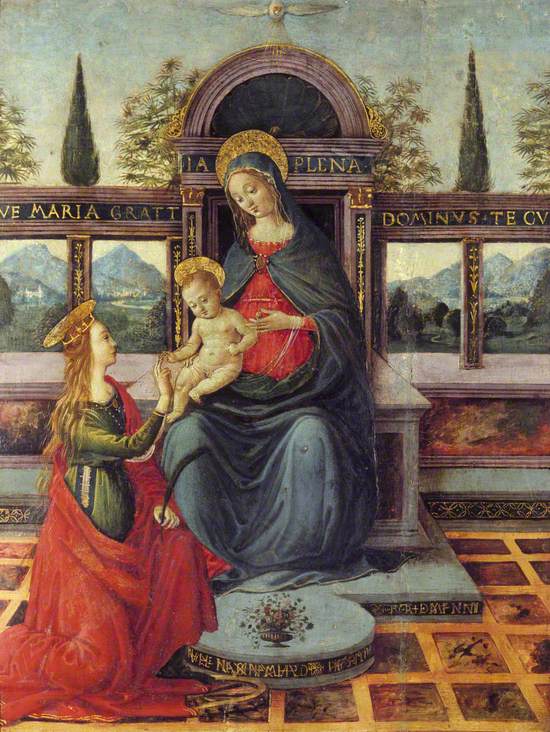 To modern minds the 'married to Christ' line may seem a clever way to refuse a horrendous marriage. But in medieval Europe, it represented something incredibly important - the possibility of true piety, taking on Christ's suffering with him and reaching an elevated status through such dedication.

The middle ages were a perilous time, social mobility was extremely limited and girls and women held little power. Unless, of course, they were the brides of the almighty.

This image of one of the Catherine with the Madonna and Child highlights their status through contemporary visions of wealth - though Catherine is still kneeling, both women are dressed finely in richly coloured materials & situated amongst the trendiest architecture! 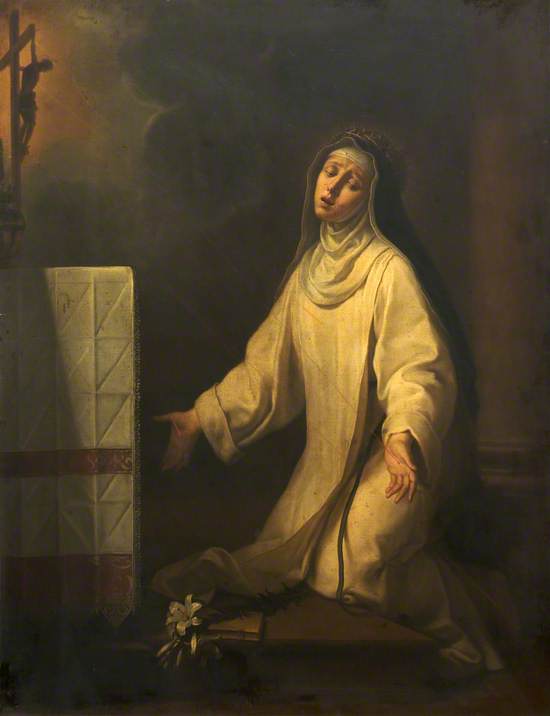 When I said 'taking on Christ's suffering'... well, that was quite literal. Many saints through history are said to have shared in the symbolism of Christ's crucifixion, through the 'stigmata' - the wound where the nails went through his hand. For some, it appeared suddenly and painlessly. For others, it was the lasting effect of a moment of truly shared suffering, taking on part of the pain Christ suffered in order to atone for humanity's sins. This is the same kind of righteous suffering that makes martyrs holy. And for Catherine of Sienna, it was supposedly a part of her role as his 'wife', sharing in his life and his purpose. 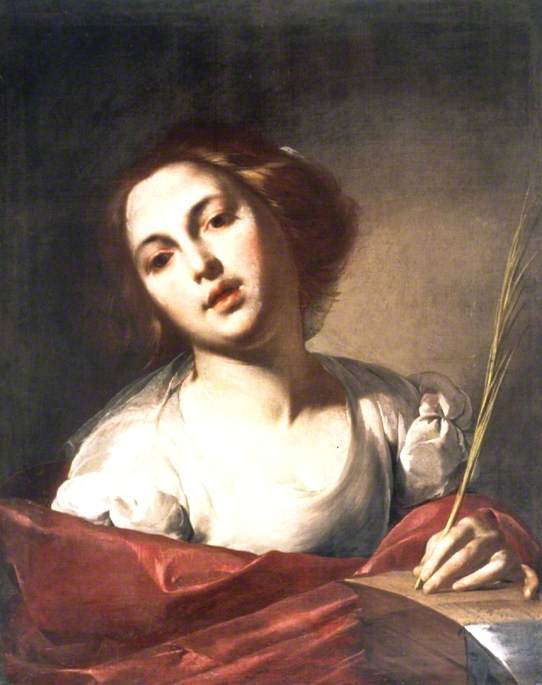 There was another aspect to the 'mystical marriage' idea. Early Modern society struggled with the idea of women and the possible dangers of their autonomy. 'Mystical marriage' could be a means of channeling women's sexuality into a form men could cope with, or even enjoy.

This painting from the 17th century illustrates that key function of the stories. Here, Catherine of Alexandria seems suppliant, breathless, with her head tilted back, neck exposed, lips apart, hair falling out of it's style & skin glowing in a great beam of light.

Perhaps the light symbolises the visitation, with her far-off gaze lost in a spiritual realm, but perhaps this just provides the excuse to stare, to idolise. Her body & her beauty are left as the focus. 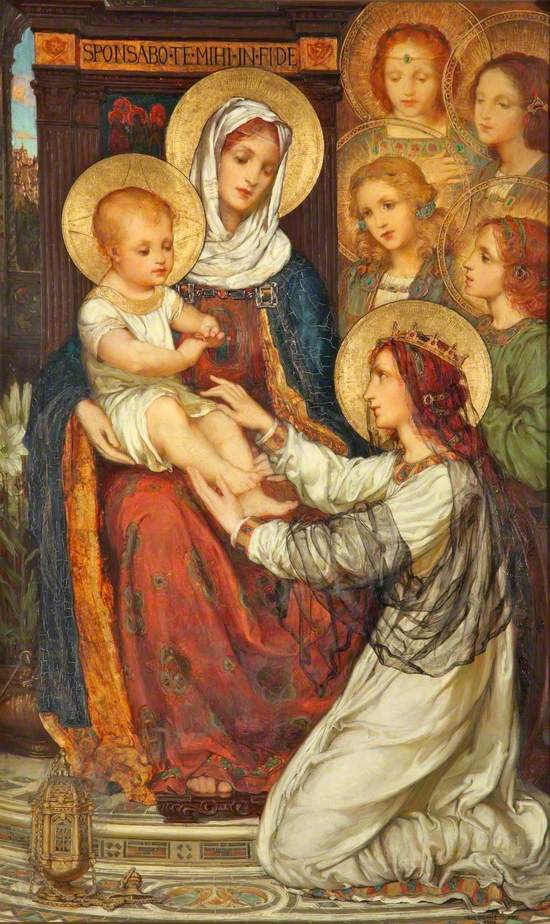 The Marriage of Saint Catherine, 1902

The subject of the Catherines' mystic marriages seems to have gone out of fashion through the Early Modern period. Nevertheless, the Victorians were fascinated by both early Renaissance paintings and moral narratives in their artwork. This meant a return of many of the religious subjects of earlier centuries. And with them, the mystic marriages.

May Louise Greville Cooksey clearly echoes the earliest images we've seen, with a Catherine kneeling as she reaches out towards the infant Jesus, held by the Madonna, on her crown.

Perhaps anticipating an audience less familiar with the subject, she labels it, with the words above the throne, which translate as 'I betroth you to me in the faith'. 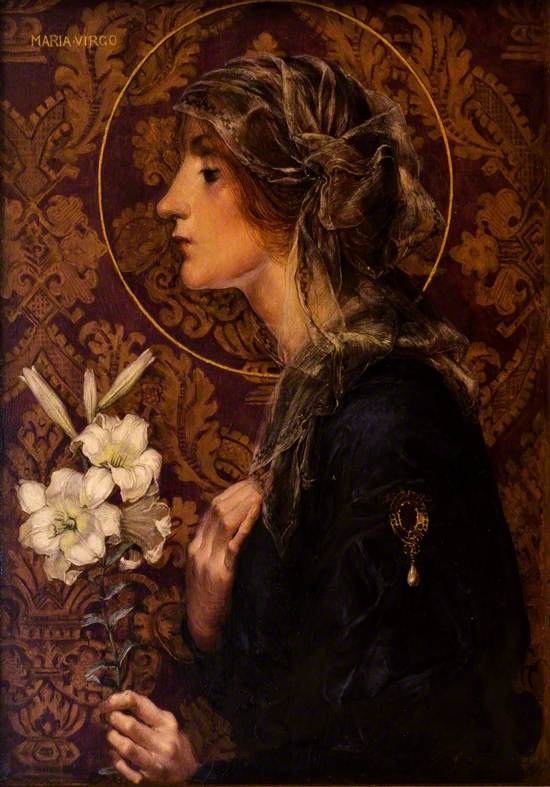 What Greville Cooksey thought about the idea of 'mystic marriages', we cannot know. But another of her works indicates an ongoing interest in women's religious sexuality, or celibacy. This stunning profile, complete both with halo and pure white lilies, is helpfully titled, 'Maria Virgo', or 'Virgin Mary'. Mary, after all, was the OG Christian virgin.

Feminism has come a long way in the past century. It's not surprising that there aren't many recent examples of this trope. So what now should we do with the 'mystic marriage' idea, and its complex underpinnings of status, suffering & controlled sexuality? Well, knowing about it at least helps us to understand the place of women throughout the history of the church.