Introducing the Jerwood Collection: A Curator’s Choice was the first exhibition of a year-long residency at The Harley Gallery (https://www.harleygallery.co.uk/). Lara Wardle, Executive Director Jerwood Foundation, chose some of her favourite works from the collection. Many of the works are connected to each other, either through the subject matter depicted, or the artists themselves: some artists taught other artists; some were friends; some related; and others were rivals.

This online curation is a selection of works featured in the main auditorium. 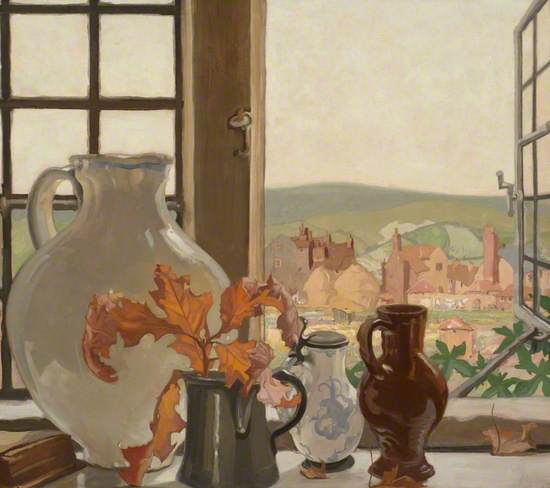 This is the first painting that was bought for the Jerwood Collection in June 1993. At the time, the Jerwood Foundation had recently moved to a five storey Georgian house in Fitzroy Square, London. There were lots of rooms with a corresponding amount of empty wall space and, as Alan Grieve (Chairman of Jerwood Foundation) had a personal collection of 20th century British art, he naturally bought works he liked to look at.

The view in the painting is from Brangwyn’s home in Ditchling, Sussex, ‘The Jointure’: the legal term ‘jointure’ refers to lands given to a wife as part of a settlement. The house in the painting was part of the divorce settlement between Henry VIII and Anne of Cleves. 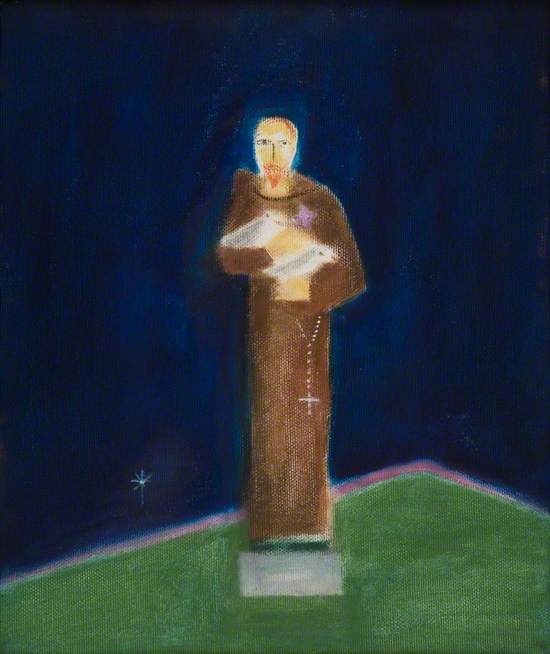 St Francis of Assisi is thought of as the patron saint of animals and the natural environment. In this jewel-like painting, both in size and colour, St Francis is shown gently embracing two birds. The distinctive pointy hill behind St Francis is Goat Fell on the Isle of Arran which Aitchison was familiar with from childhood visits. 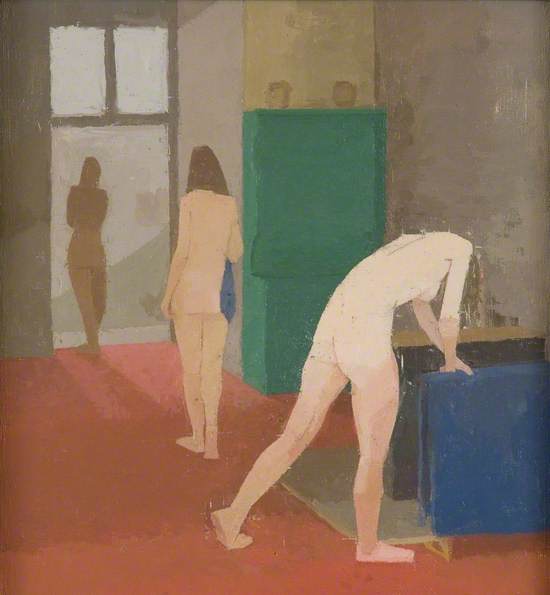 Time feels like it has been distorted in this small painting as we see one of Uglow’s models in three different poses, related to her habit of collecting a towel, having a shower, and leaving, when she stayed at Turnchapel Mews in London, where Uglow lived and worked.

Euan Uglow was great friends with Craigie Aitchision and they were both shortlisted for the Jerwood Painting Prize in 1994, the year that Aitchison won (and his Crucifixion painting entered the collection). 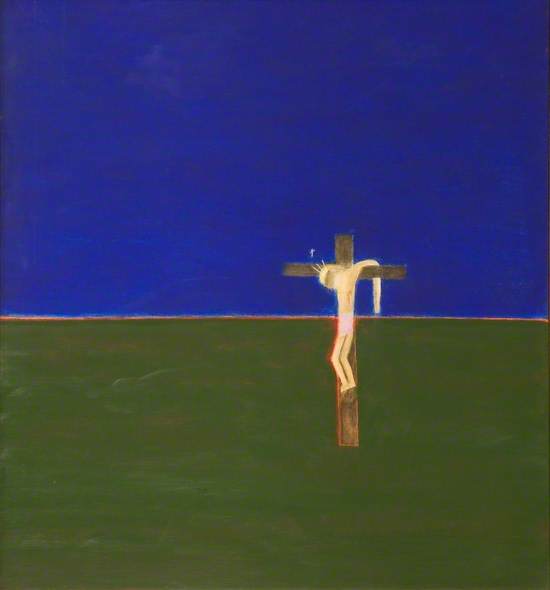 This is the painting which won Craigie Aitchison the first Jerwood Painting Prize in 1994, the most valuable art prize to be awarded in the UK at the time. Alan Grieve recalls that, ‘at the moment of the winning announcement, Aitchison could not be found. He had to be retrieved from a nearby pub’. 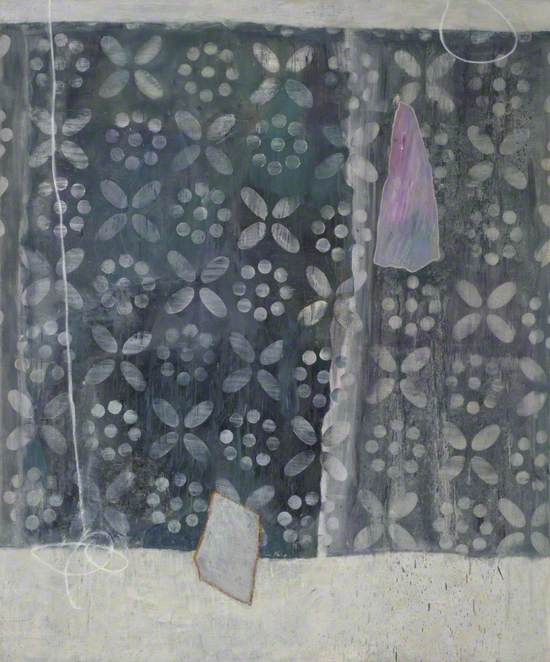 Prunella Clough won the Jerwood Painting Prize in 1999, poignantly the year that she died. This painting is typical of Clough’s more abstract later work and is very different from her earlier paintings. Have a look at the small canal painting, below to see how these two periods of Clough’s work compare. 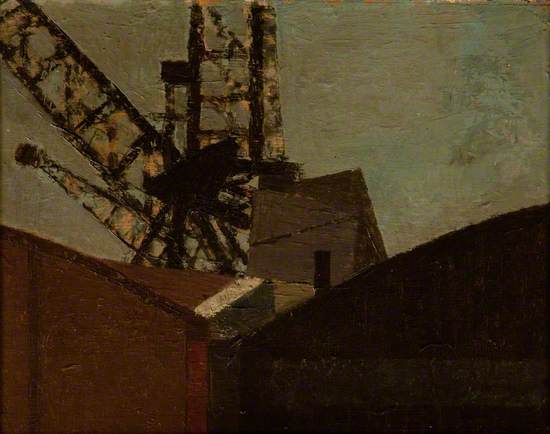 This small, rather sombre work, painted in the post-war doldrums of the 1950s, feels in marked contrast to her rather more joyful and colourful large canvas. 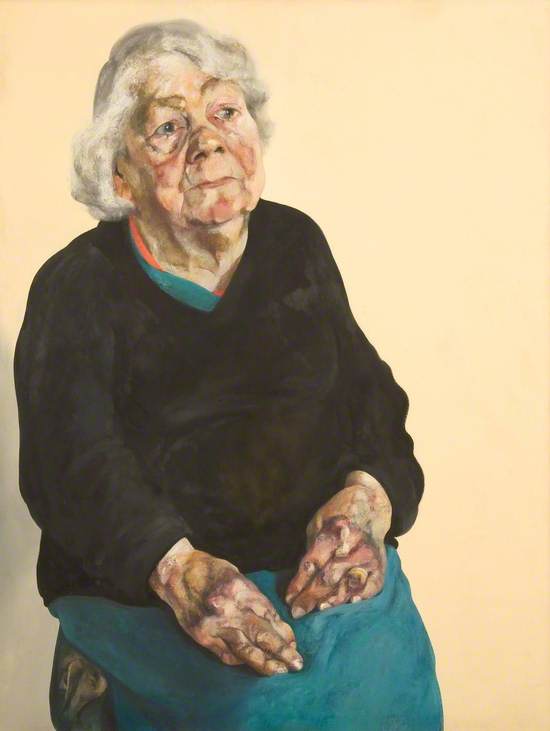 Frances Rose was Maggi Hambling’s neighbour in Battersea, London, where Hambling lived and worked from 1968 to 1984. When Alan Grieve bought the painting for the Jerwood Collection in 1995, Hambling wrote to Alan about the sitter: ‘In 1973 she was a widow in her 80s, had been in ‘service’ and still took in washing. She had severe arthritis in her hands, enjoyed drinking Guinness and sewed bells to the knees of long red knickers for the old people’s annual Christmas party’.

Maggi Hambling was the joint winner of the Jerwood Painting Prize with Patrick Caulfield in 1995. 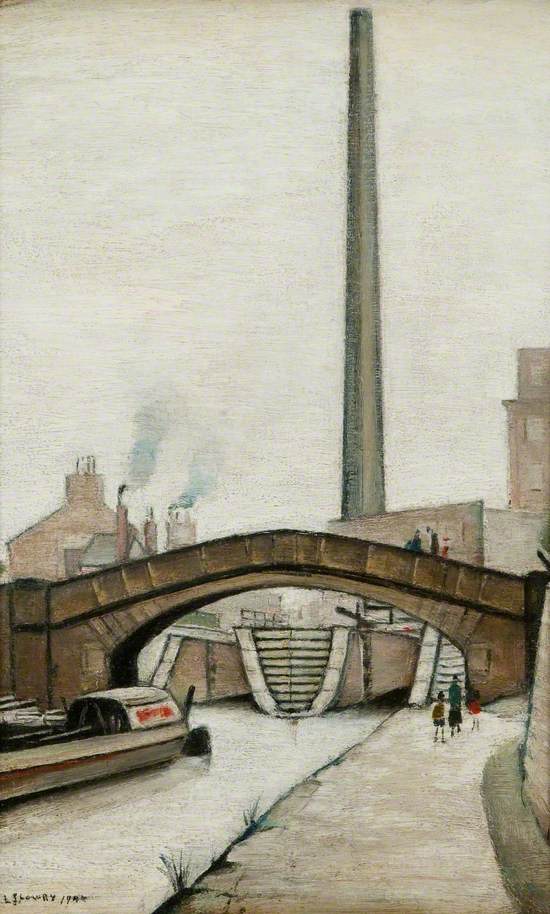 Laurence Stephen Lowry is often thought of a painter of a bustling scene peopled with diminutive ‘matchstick men’ that hurry backwards and forwards, however many of his paintings were industrial and yet unpopulated. This painting depicts the top lock at Fairfield on the Ashton Canal, which was completed in 1797 and joined Manchester with Ashton-under-Lyne. Lowry believed that you should ‘paint the place you know’ and this view would have been well known to him. In this painting, the focus is the hump-back bridge, which was built high enough to allow horse-drawn barges laden with goods to pass under it. 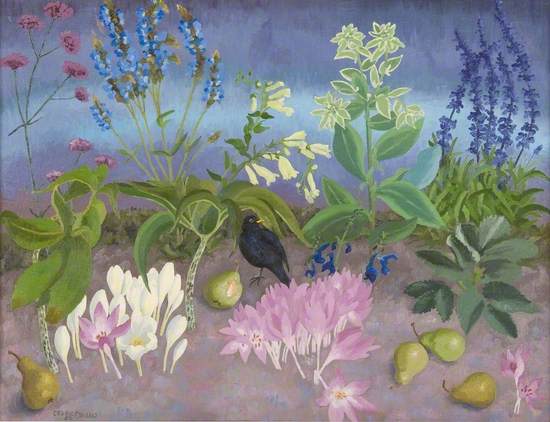 Cedric Morris shows us his great passion for the natural world in the joyful colours and attention to detail in this painting. Having turned his back on the London art scene in the late 1920s Morris and his partner, Arthur Lett-Haines moved to Suffolk and later set up the East Anglian School of Painting and Drawing. Maggi Hambling, whose painting is hanging nearby, was one of the pupils who was taught at the school as well as Lucian Freud, who joined at the young age of seventeen.

This was bought at the same Sotheby’s sale in June 1993 as the Frank Brangwyn painting. We have it listed as the second painting bought but that is simply down to the lot order of the sale: the Brangwyn was lot 15 and this painting by David Bomberg was lot 49.

Painted nearly a lifetime after David Bomberg’s still life, Saturday Wait by contemporary artist, Clare Woods, shares a similar sombre palette of colours. Woods paints on aluminium which gives her a very smooth surface to push the paint across and create sharp crisp edges between some of the colours. In contrast Bomberg’s painting is softer, but both feel a bit gloomy. Plants and flowers are best in the ground (as in Cedric Morris’s joyful painting): once cut, their time has been shortened and there is an element of urgency for a painter to capture them before they wilt. 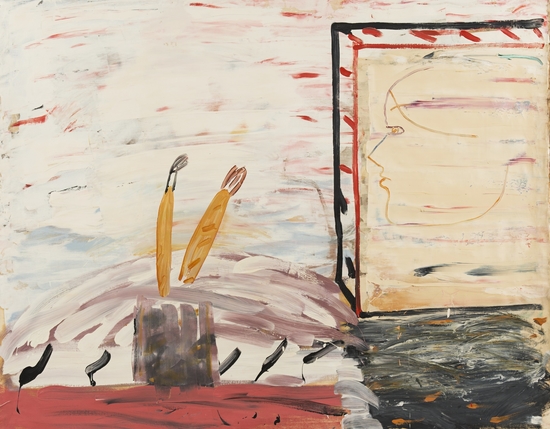 Roy Oxlade penned one of my favourite quotes about painting: ‘Painting is a funny business … it falls between the extremes of music and literature – both of which can be done seriously in the head in the way painting can’t’.

Roy Oxlade is closely connected to two of the artists whose work is hanging nearby. He was taught by David Bomberg at Borough Polytechnic; and was married to Rose Wylie. 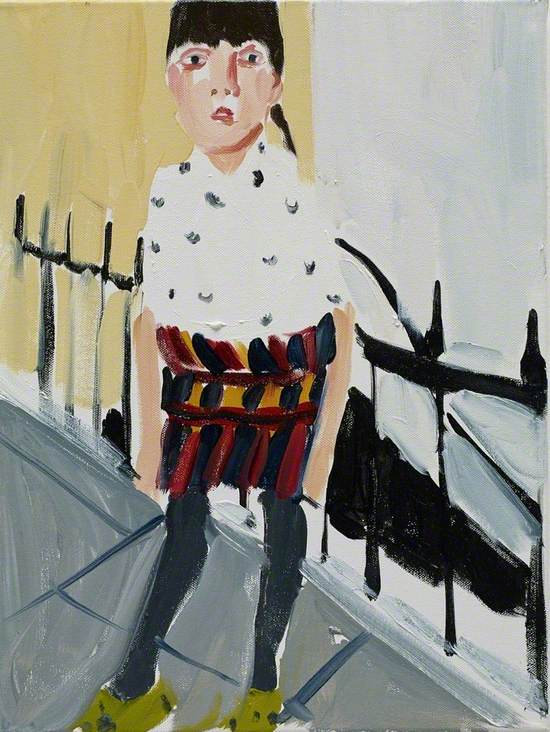 Esme is Chantal Joffe’s daughter and appears in many of her paintings. Although it is an unusual portrait, with part of Esme’s head and feet cropped out of the painting, we immediately recognise the ubiquitous green crocs she is wearing and her off-hand childish stance. 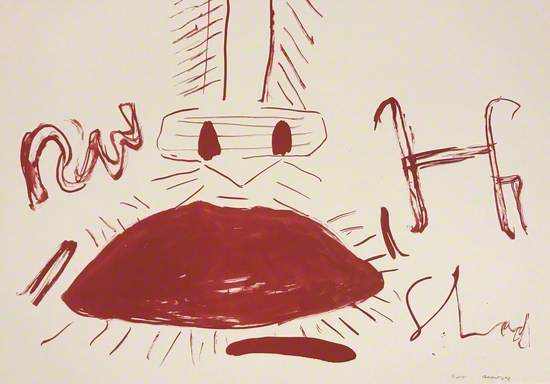 Not a self-portrait in any traditional sense, more just a pair of giant lips but, that’s just it, isn’t it? A self-portrait is not what the viewer expects to see, or thinks they might see, but how the artist sees themselves. 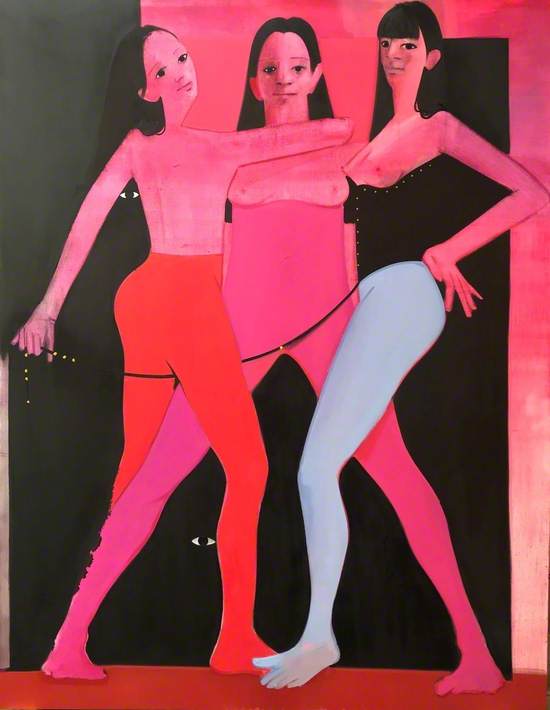 This bold painting is by the youngest artist whose work is held in the collection. There is no escaping the direct gaze of the three young women portrayed and, as we look up at the painting, we become an object of scrutiny ourselves. Depending how you feel today, looking at the painting might make you feel a bit uncomfortable, or it might feel quite empowering.

View all 13
View all