To kick off Dutch Week at the Stirling Smith Art Gallery & Museum, we've put together a curation of some common genres that can be found in seventeenth-century Dutch paintings.

The formation of the Dutch Republic in 1581 brought about a new era of prosperity for the Dutch, after years of rule under Spain. The country was able to forge a new cultural identity based firmly on Protestant principles and utopian ideals. They established successful trade routes and became and economic powerhouse. This period of prosperity also produced a new art market where artists produced works for diverse audiences rather than just the ruling elite, allowing artists to be creative, patriotic, critical, and satirical. 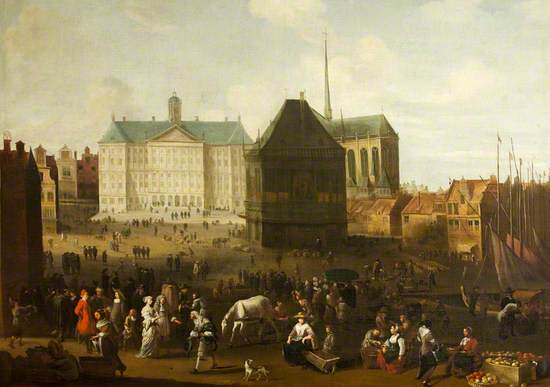 The new Amsterdam Town Hall was built between 1648 and 1655 in Dam Square where it still stands today. It replaced the medieval town hall which the city had outgrown. Every inch of the Town Hall was built with civic purpose in mind and both the inside and outside were richly decorated to celebrate these civic responsibilities. Many paintings such as this one, were produced to celebrate the erecting of the the Town Hall. It served as a symbol of the Dutch Republic's newfound prosperity after freeing themselves from Spanish rule. Hendrick Mommers represents it bathed in sunlight (a common depiction) while residents and visitors of Amsterdam busy themselves below. This townscape celebrates the industry that secured the country's happy rebirth. 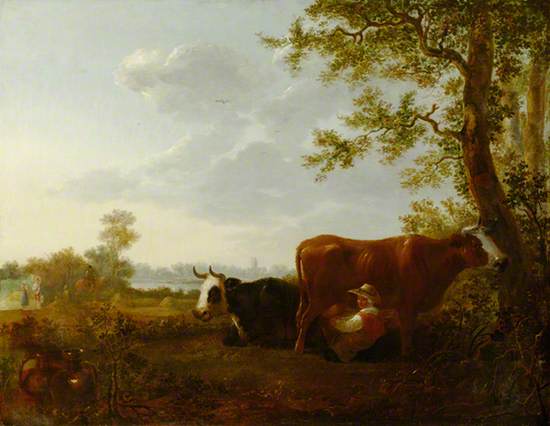 The financial prosperity of the seventeenth century caused many people to move out of the countryside and into urban areas to make their fortunes. This increased the demand for landscapes so city dwellers could wistfully reflect on the natural beauty of their country. Whilst serene, like most genres of Dutch art, these landscapes were highly patriotic. In this work by an imitator of prolific landscape artist, Aelbert Cuyp, you can see the skyline of a city in the distance. In the foreground, a farmer milks his cows, again, showing the fortunes of industry which contributed to the prosperity of the nation. The cow became a symbol of this prosperity and often featured in paintings by Cuyp. 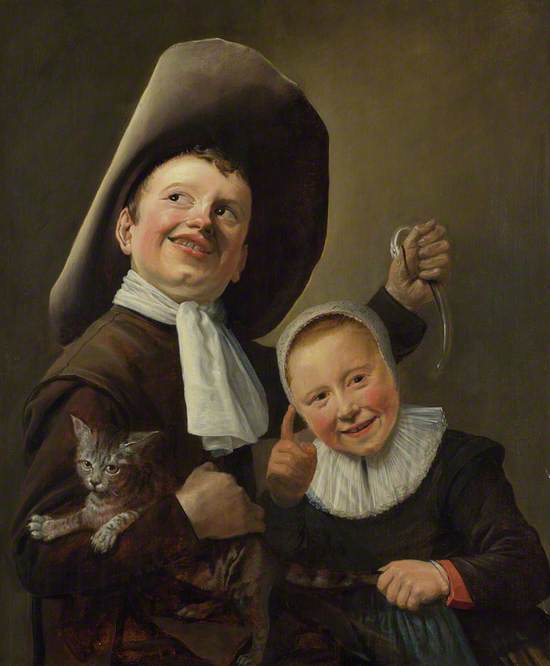 Early Netherlandish artists such as Hieronymus Bosch and Peter Bruegal the Elder were known for painting proverbs into their artwork and Judith Leyster continues this tradition in her painting. Two grinning children have mischievously lured a cat over with a wriggling eel. The little boy holds the eel out of reach while the little girl begins to tug the cat's tail. Both children seem pleased by their own bad behaviour. The cat, meanwhile, looks unimpressed. We are certainly witnessing the moments before the cat makes its next move and judging by the Dutch proverb, ‘he who plays with cats gets scratched’, the two children are unlikely to be smiling for much longer. 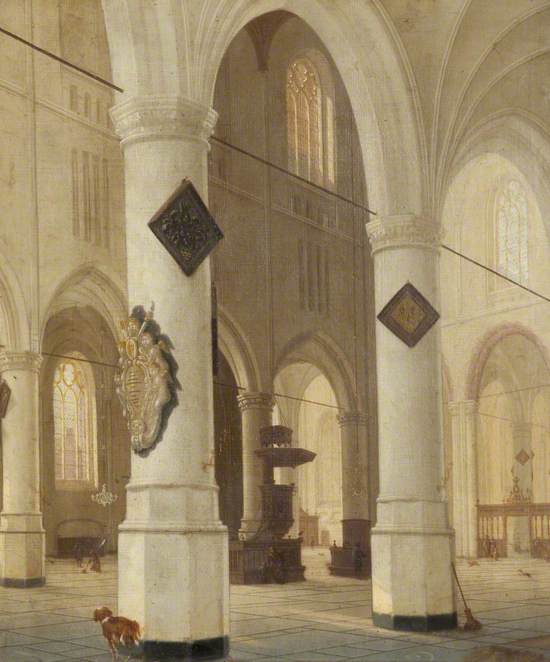 After gaining their freedom from Catholic Spain, the predominantly Protestant country converted many of their Catholic cathedrals into Protestant churches. Statues of saints were removed and the walls whitewashed, changing the interiors from colourful spaces covered with religious imagery to cavernous rooms bathed in white. Church interior paintings celebrated this newfound Dutch-Protestant identity through the new appearances of the churches. It was not just the appearance that had changed; churches were now more communal spaces rather than sacred. In the bottom left you can see a dog has wandered in to the Delft church and is relieving itself against a pillar. 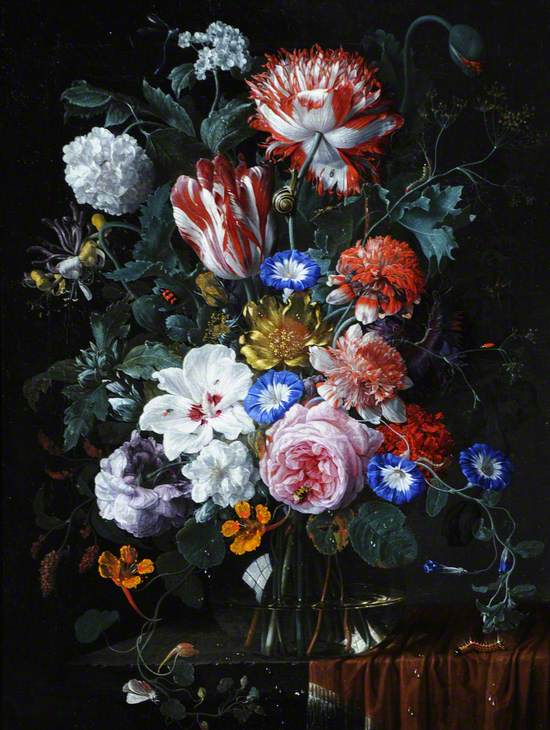 Successful trade routes led to economic prosperity in the Dutch Republic. This not only brought in more money but new flora from distant lands. Tulips, a flower deeply associated with the Netherlands even today, arrived from Turkey. The flower became so popular that a tulip market, much like today's stock market, was established. The most prized tulip can be found in flower still lifes such as Nicolaes van Verendael's 1677 piece: the striped tulip. This tulip was so expensive that people allegedly took out a mortgage in order to purchase a bulb. Sadly, the stripes on the tulip were caused by a virus which meant that the flower would not propagate, causing the owners to lose a significant amount of money. 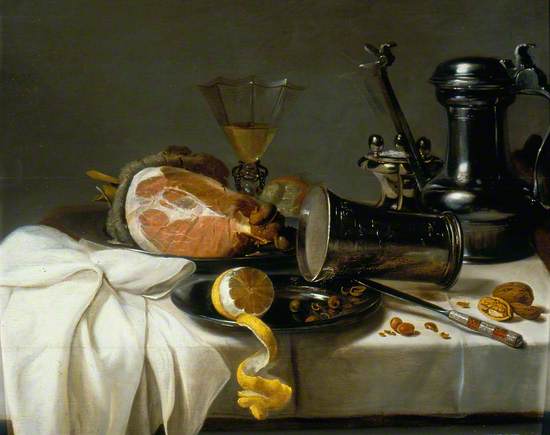 Still lifes had many themes. This one portrays a breakfast piece, or banketjestukken. Still lifes celebrated economic prosperity but were often loaded with moral symbolism to imply that all fortune is fleeting. If you looks close, many contain hidden insects or even rotting fruit to convey this sentiment. This work by Jan van Zoon or a follower, portrays a haunch of meat, lemon, and nuts which sit upon a messy table. Many different textures such as the pewter, glass, and flesh are portrayed in this artwork as a means to display the artist's technical skill. The disarray may not only show off the artist's talent but also symbolise the not so appetising aspects of flagrant wealth. 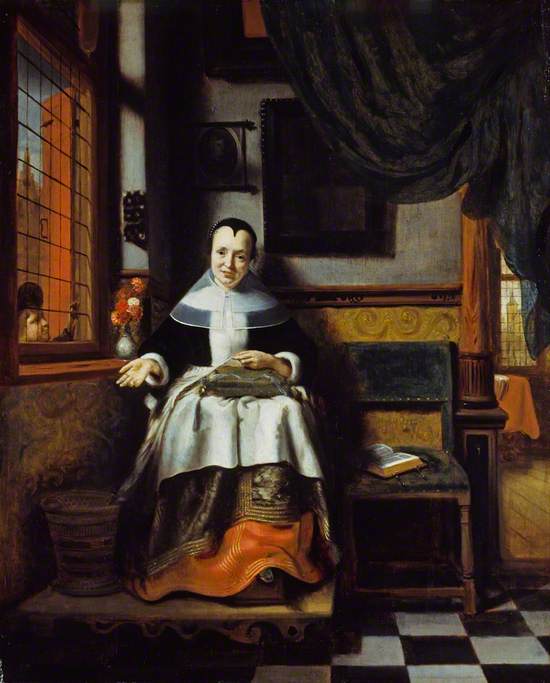 These scenes of everyday life were one of the most popular types of paintings created during this period. Popular topics included doctor visits, servants sharing a secret with the viewer, and the 'heroic housewife' to use Simon Schama's phrase. It is this last theme that Nicolaes Maes has portrayed here. The mistress of the household is representing sewing by a window. In running a virtuous home she is contributing to the glory of the Dutch Republic. An open Bible lies next to her, indicating her religious devotion. Despite these symbols of virtue, the woman sits upon a raised stoop in what is presumably a gossip chair. These chairs were given this name as they allowed their occupiers a good vantage for spying on neighbours out the window. 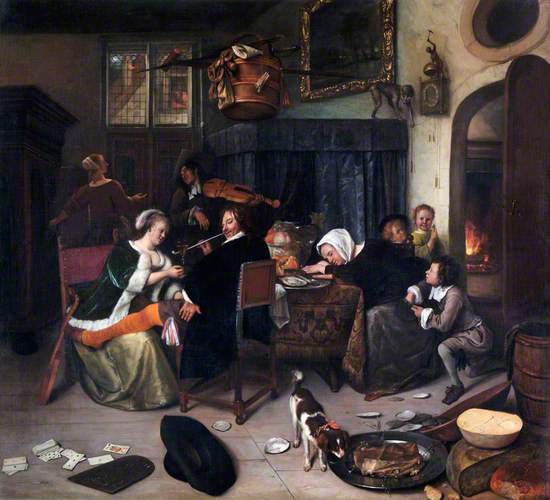 Many genre paintings had a humorous or satirical tone to them while still relaying a moral message. The prolific painter, Jan Steen was a master of such paintings. He often portrayed messy settings, culminating in a new Dutch proverb: 'a Jan Steen Household' or untidy home, as is portrayed in this artwork. Steen also often painted himself into his work, smirking and winking as if sharing a joke with the viewer. In this artwork he portrays himself as the dissolute master of the house who flagrantly flirts with a woman while his wife is passed out behind him. Her pockets are being picked and a dog takes advantage of the situation to steal a bite of meat. It's not the only thief; the maid in the background has stolen her mistress' necklace.