This exhibition explores the changes in Dundee’s built and natural environment and the way that these have been depicted by artists over the years. All the artworks shown come from the University of Dundee Museum Collections. 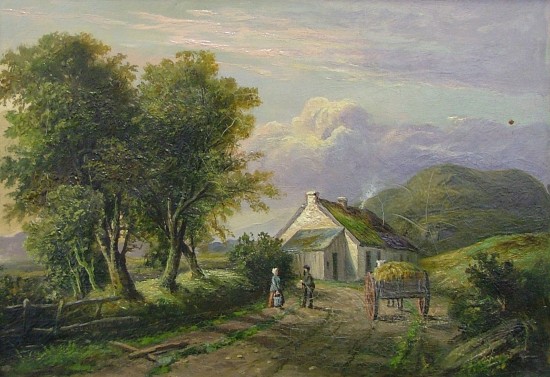 Archaeological evidence suggests that there were people living on the slopes of Dundee Law around 3,500 years ago. Its spectacular view over the Tay estuary would have made it an ideal site for habitation. 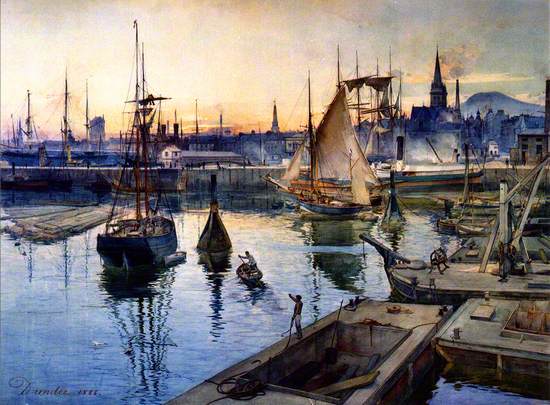 It was the growth of Dundee’s harbour that led to the town gaining a royal charter in 1191 and over the next few centuries it developed into an important trading port. The linen industry expanded in the 18th century (importing flax from the Baltic) but jute became the dominant industry in the 19th century (imported from the Indian subcontinent). By the time this busy harbour scene was painted, Dundee was also a major whaling port, whale oil being key to the processing of jute. 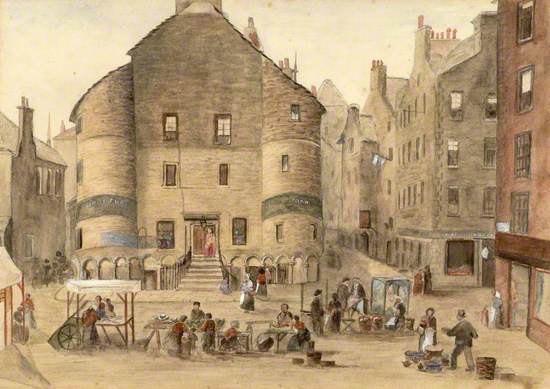 This 16th century building became Dundee’s Custom House until it was replaced by a grander structure in the 19th century (still surviving on Dock Street). David Small was one of several topographical artists recording the older parts of the town, many of which (including this building) were demolished in the late Victorian period. Crichton Street now stands on this site. 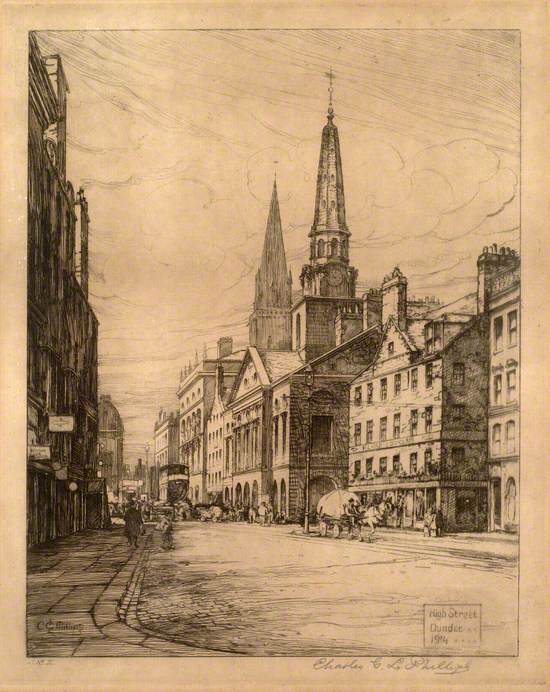 For 200 years, Dundee’s most important civic building was the Town House, built by William Adam in 1732-4. By the early 20th century it was in poor condition and the city architect James Thomson had plans to tear it down to create a new civic square. Many Dundee artists opposed the idea and were keen to draw the public’s attention to the aesthetic qualities of what was under threat. The Great War delayed Thomson’s plans, but the Town House was eventually demolished in 1932 to make way for City Square. 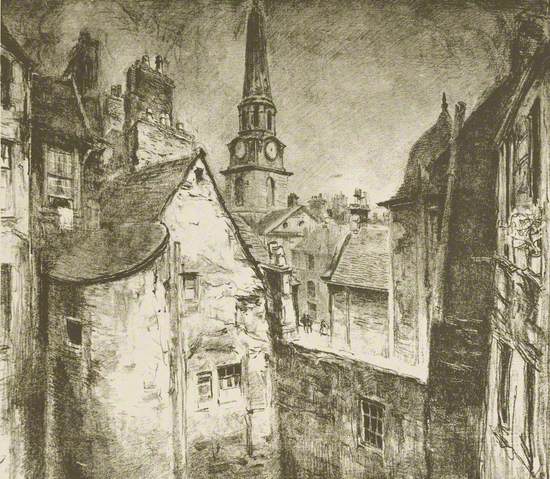 The area behind the Town House was a labyrinth of tightly packed tenements, most of which had become horrendous slums by the time they were demolished. Tom Ross was another artist recording parts of the city that would soon disappear forever. 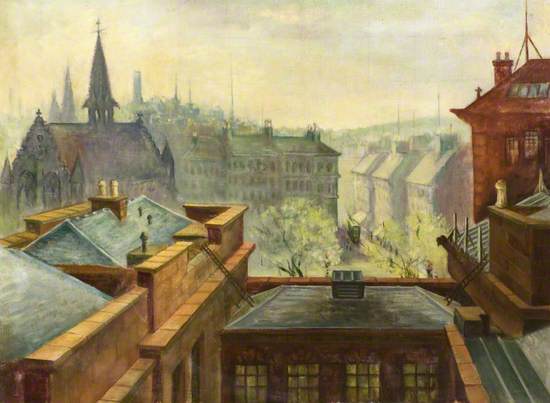 While some parts of Dundee have changed completely, others remain much the same today. From the top of the Art College (then part of Dundee Institute of Art & Technology on Bell Street), we can see the roof of the High School in the foreground, the Albert Institute (now The McManus: Dundee’s Art Gallery & Museum) on the left and the headquarters of publishers DC Thomson & Co on the right. One thing you can’t see now is the tram going up Reform Street.

Although jute production began declining in the 1880s, it remained Dundee’s principal industry for most of the 20th century. Factory chimneys dominated the skyline but only a few still remain today. When Dundee was at its industrial height, artists largely avoided factory buildings as subject matter, but as industry steadily declined, the aging and gloomy buildings started to exert a fascination for younger artists. 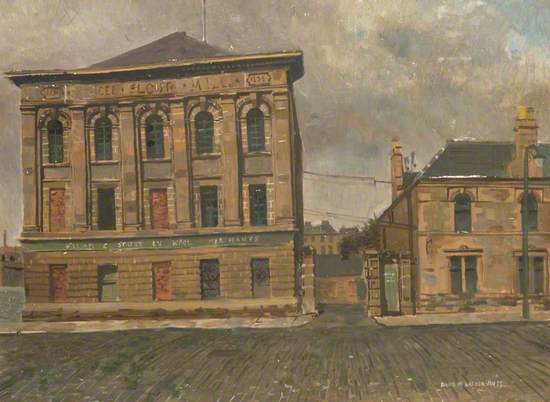 As an art student in the 1950s, David Walker became fascinated by Dundee’s architecture, recording it through drawings and paintings. He later joined the Scottish Office as Senior Investigator of Historic Buildings, ultimately becoming Chief Inspector for Historic Scotland. This mill was originally owned by John Forbes White, a wealthy flour manufacturer and also notable art collector in Dundee and Aberdeen. 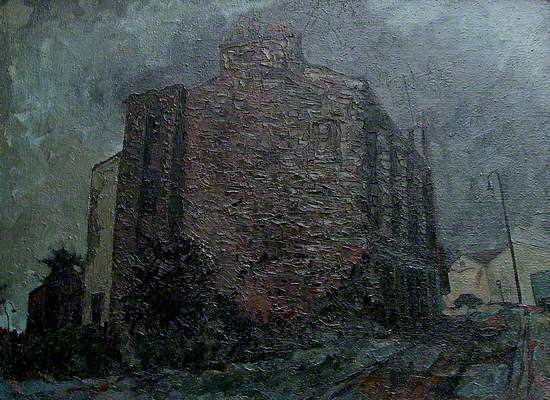 The early success of the jute industry led to a huge increase in Dundee’s population and the rapid construction of hundreds of Victorian tenement blocks to house the badly paid workers. Many of these were of poor standards and flats built for 2 or 3 people were soon used to house families of 6 or more. This building in Kirk Street became known as ‘Desolation Alley’, the name scrawled on it in graffiti for some years before it was eventually demolished. 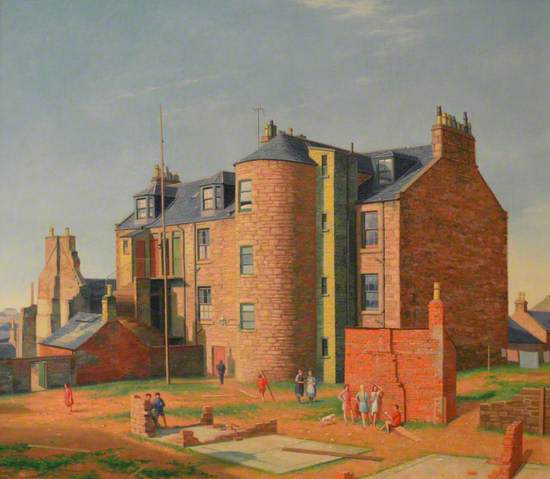 Some artists depict a more positive view of working class life in the city. In this colourful scene, Alec Muir presents an almost Utopian view of life in the Hilltown, emphasising the social aspects of tenement living. By this time there were fewer factories operating and many of the worst slums had been demolished, leaving more space and cleaner air. 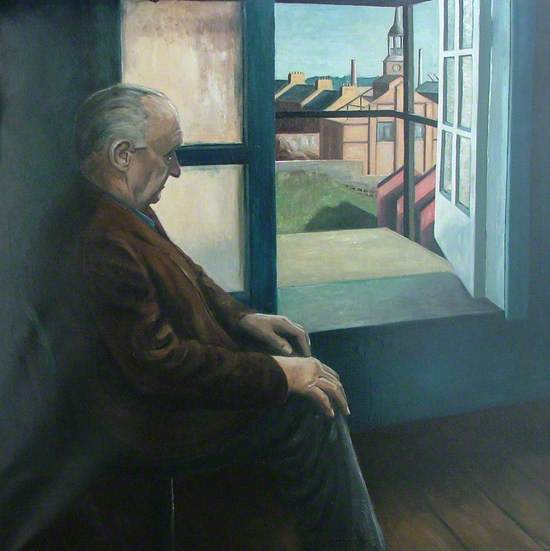 By the 1980s most of Dundee’s textile mills had closed. Upper Dens Works was the first to be given a new lease of life as housing, in an award-winning development opened just a few years after this painting was made. Is the figure in the foreground a former mill worker, looking back on his years of hard graft? 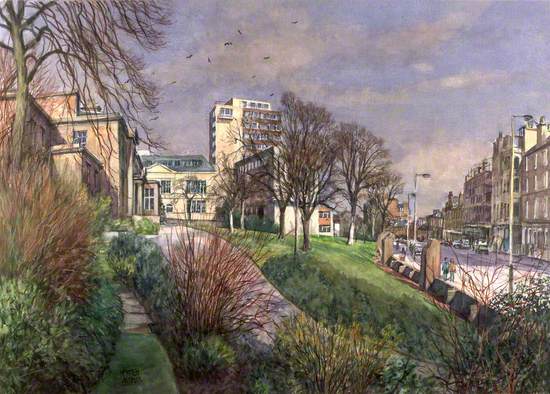 The University of Dundee has had a significant impact on the built environment of the city. In 1959 work began on the Tower Building, Dundee’s first multi-storey tower block and now a listed building. Although the building itself is eleven storeys high, here McIntosh Patrick seems to have knocked a floor off it for aesthetic reasons!

At the same time that the University campus was undergoing development, Dundee’s Art College was also expanding in its new home on Perth Road. What is now the Crawford Building was built in stages – here the final south wing has yet to be added, giving a dramatic view over the River Tay.

View from the Drawing and Painting Department c.1959
Ian Drummond (b.1938)
Oil on board
H 90 x W 211 cm
University of Dundee, Duncan of Jordanstone College Collection 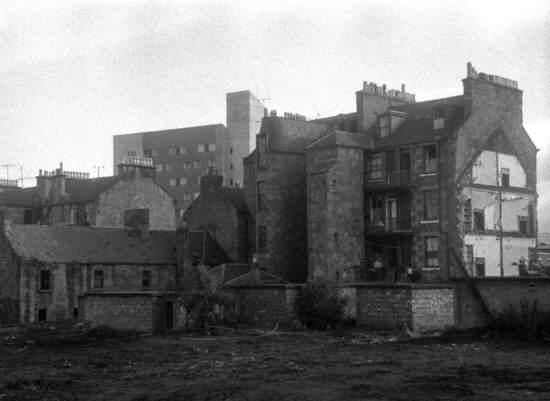 The expansion of the University and Art College campuses unfortunately meant the gradual demolition of the Hawkhill area. An entire community was relocated, many to the new housing schemes on the edges of the city. Here, Walter Simms (a Graphic Design student at the time) has captured the transition – behind the partly demolished tenements we see the newly built tower of Belmont Hall of Residence. 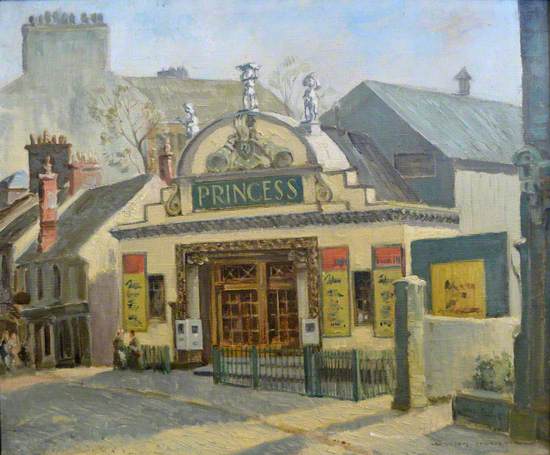 One of the many buildings taken over by the University was the Princess Cinema, first opened as the Hippodrome Theatre in 1908. It closed in the late 1950s and was used for a while by the University’s Law School before eventually being demolished. Dundee once had more cinemas per person than anywhere else in the country. 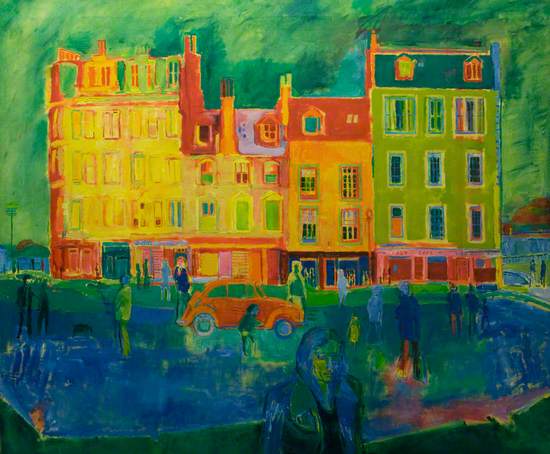 The ‘Tav’ bar was the regular haunt of Dundee art students. It first opened in 1869 but like so much of the Hawkhill it was demolished in the 1980s to make way for further expansion of the University campus. 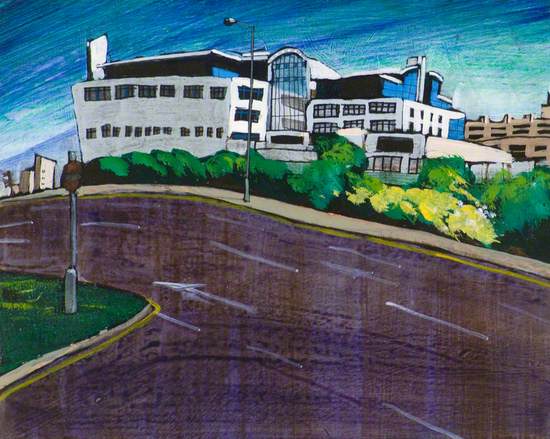 A major part of the University’s expansion has been driven by the global success of Life Sciences research. The Wellcome Trust Biocentre (almost directly opposite the site of the Tav) was completed in 1997 and has been extended twice since then, first by the Sir James Black Centre (2006) and then the Discovery Centre for Translational & Interdisciplinary Research (2014). Many spin-off biomedical companies are also based in new buildings nearby. 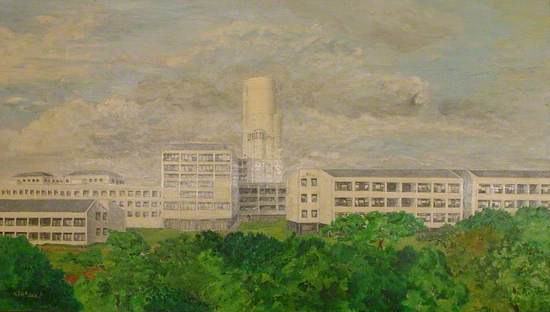 Dundee has also seen some significant medical building projects, the largest of which was the construction of Ninewells Hospital. Planned after the Second World War, it was eventually built 1965-74. As the first new teaching hospital built in the UK since Victorian times, its design was revolutionary, using low-lying buildings on a hillside to provide separate access levels for different services. More recently it was joined by the nearby Maggie’s Centre, the first building in the UK designed by the award-winning architect Frank Gehry. 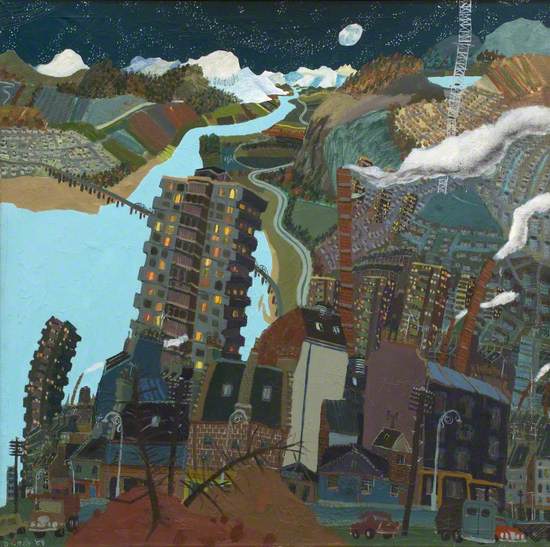 In the 1960s city planners developed a passion for high-rise living, with multi-storey blocks of flats (known in Dundee as ‘multis’) appearing in many parts of the city. Few artists were keen to capture them on canvas, but Douglas Gray painted a series of imaginary landscapes clearly inspired by Dundee’s multis. Most have since been demolished. 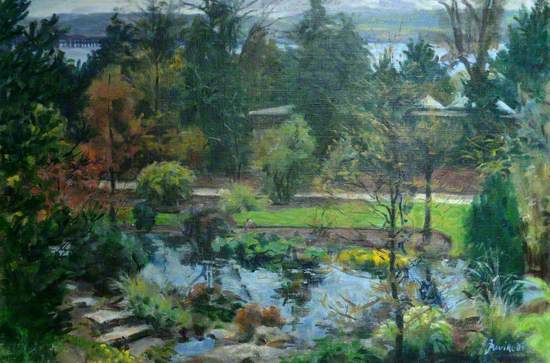 Today, Dundee is one of the greenest cities in the UK, with a wealth of parks, allotments and gardens. The jewel in the crown is surely the University’s Botanic Garden, opened in 1971. Since then many more community gardens and pocket parks have appeared across the city, a reminder that nature is as important to any city as its architecture.

View all 20
View all