Close
In 2017/18 Valence House undertook a research project funded by the Understanding British Portraits network to investigate the number of copies that exist of the Fanshawe portraits held by Valence House. The end result of this research was the exhibition shown here, which was displayed at Valence House in 2018.

We have always known that copies exist of some of the Fanshawe portraits held by Valence House. For example, our half-length portrait of Thomas, 1st Viscount Fanshawe (1596-1665) is a smaller version of a portrait held by the Fanshawe family. However, the sale in 2016 of a bust length portrait of a women identified as Elizabeth Cockayne, which was identical to the female sitter in one of our double portraits, prompted us to question how many copies exist of our Fanshawe portraits. 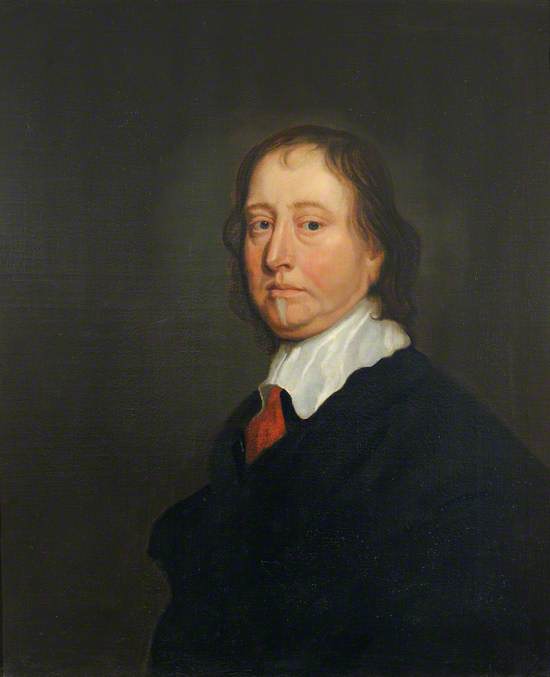 The Valence House version of 1st Viscount Fanshawe shows only his head and shoulders and sets him on a plain background. It is most likely a studio copy, made at the same time and copied from the original. 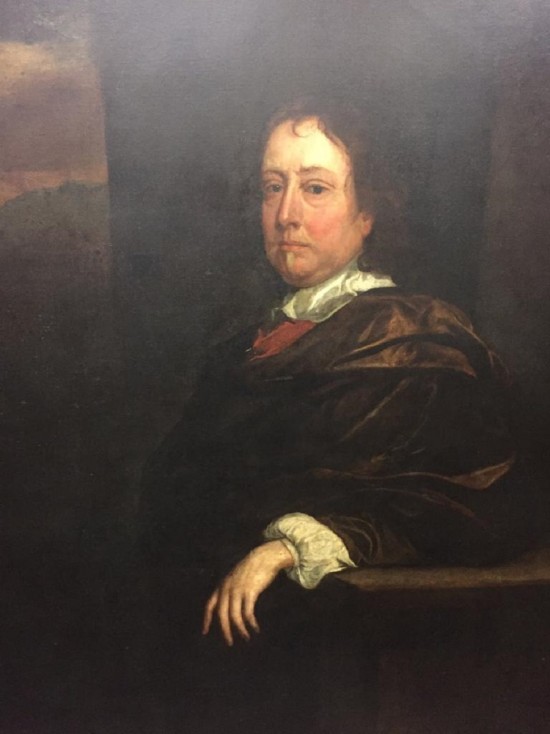 This 3/4 length portrait of 1st Viscount Fanshawe is more detailed and shows an unidentified landscape in the background.

In 2016 a painting identified as Elizabeth Cockayne (1609-1668), wife of Thomas, 1st Viscount Fanshawe was sold at auction. However, the painting style and clothing depicted suggested that it was painted too late for the portrait to show Elizabeth Cockayne.

Interestingly, this painting was almost identical to the female sitter in a small double portrait held by Valence House Museum of Sir Thomas Fanshawe of Jenkins (1628-1705) and his second wife Elizabeth (1641-1729), who was the daughter of Elizabeth Cockayne and 1st Viscount Fanshawe. 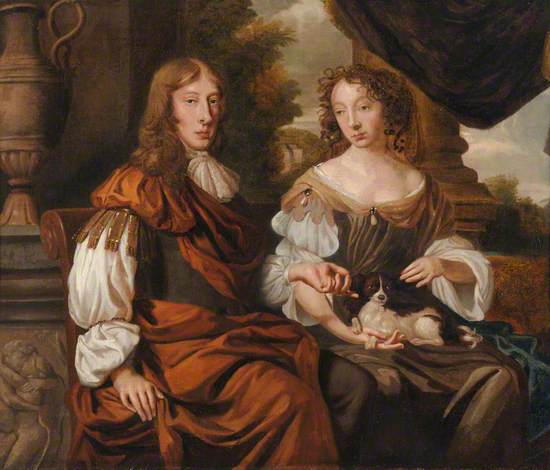 When donated to Valence House Museum in 2005, this painting was thought to show Sir Thomas, 1st Viscount Fanshawe and his 2nd wife Elizabeth Cockayne. However, the clothing style suggests a later date, and the sitters have been re-identified as their daughter Elizabeth and her husband Sir Thomas Fanshawe of Jenkins.

The portrait sold at auction in 2016 clearly represented this female sitter.

A visit in 2013 to Melbourne Hall, Derbyshire (ancestral home of the Coke family) had revealed that this double portrait was, in fact, a copy of a much larger double portrait by Sir Peter Lely. The Fanshawe family are connected with the Coke’s via the 1695 marriage of Mary Coke to John of Parsloes, who was the nephew of Sir Thomas Fanshawe of Jenkins.

Driven by these findings, the Valence House Museum Curator began a research fellowship with the Understanding British Portraits Network to investigate these copies: why they were being made and how the Fanshawe family were using them.

Why make a copy?

Painting portraits was a popular but expensive business and was generally reserved for the higher ranks of society. They were painted to mark special occasions, such as marriages and knighthoods, and acted as an object of remembrance.

Portrait copying was very common during the 17th and 18th centuries. People would commission copies to give as gifts to friends and family or, if they had more than one property, so they had a copy to hang in each of their homes.

It was also important to show your allegiance to the celebrities of the day – the king and queen or state dignitaries – and portraits of these people were mass produced by artists of varying skill and sold ‘off the shelf’.

The Fanshawe family reached the peak of their influence during the English Civil War, as Royalists who were instrumental in bringing King Charles II to the throne. This period marks the point at which the family were commissioning the most portraits. They celebrated their rise to power by hiring the leading artists to take their likeness, and had copies made to ensure that everyone recognised their new-found status. 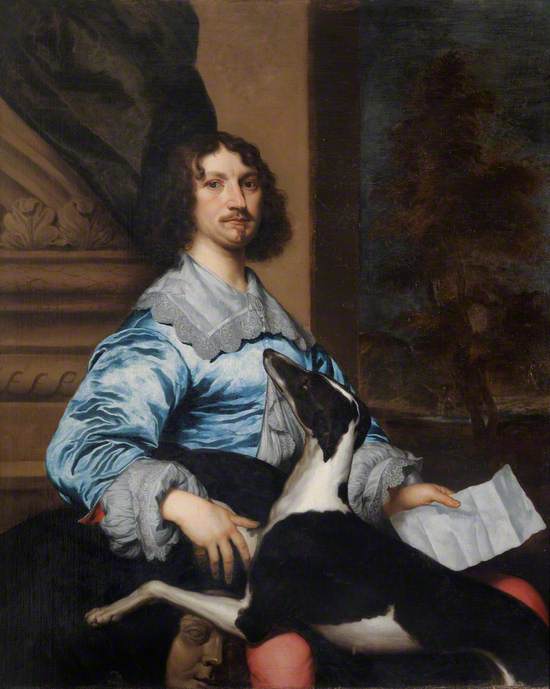 This painting is full of symbolism, telling us what sort of man Sir Richard was. The dog shows his loyalty to the king (you also weren't allowed to own a greyhound unless you were above a certain rank of nobility and Sir Richard's wife Ann records in her memoirs how the queen gifted them greyhound puppies). The paper in his hand demonstrates his political (as ambassador to Spain and Portugal) and literary works. The mask shows his love of the arts. The Solomonic column in the background symbolises his wisdom. The scene in the background is taken from the poem Il Fido Pastor, which Sir Richard translated in 1644.

Studio copies are made by the same artist, at the same time. In this situation it is often difficult to identify the original, or prime, version. However, portraits were not valued in this way: it was important to have a portrait of a person, it was less significant for it to be by the original artist.

One such example of this is the portrait of Sir Richard (1608-1666) by William Dobson. There exists in a private collection an almost identical copy that is said to have been commissioned as a gift for Sir Edward Nicholas (1593-1669), Secretary of State for King Charles II. 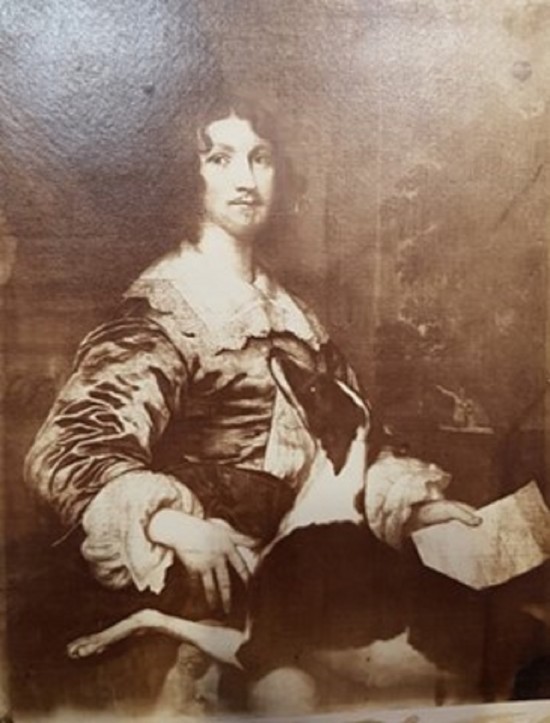 This studio copy was supposedly commissioned by King Charles II for his Secretary of State Sir Edward Nicholas. In this version, the god Alpheus, seen emerging from the pool in the background, is more defined than that in the Valence House version, yet the second figure is not shown. 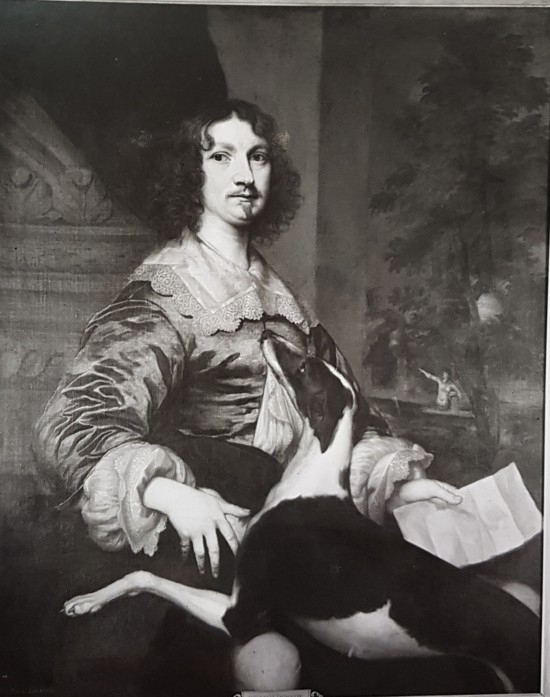 This version is thought to be a Victorian copy. The god Alpheus is yet more defined, and the dome of a temple has been added to the woodland. The dramatic mask under Sir Richard’s leg is missing.

Mary Coke (1675-1713) was from a prosperous Derbyshire family. Her portrait was probably painted to mark her marriage in 1695 to John Fanshawe (1662-1699) of Parsloes. Two versions were commissioned – one to hang at Parsloes, the other to hang at the Coke family home of Melbourne Hall.

Another contemporary version of this portrait, dating from the same period, also exists and is currently owned by the Government Art Collection (G.A.C.). 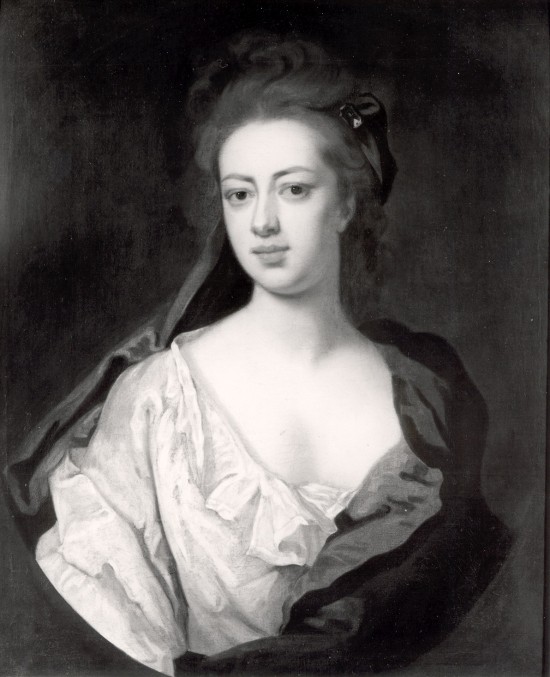 Mary Coke was the daughter of Colonel John Coke, 1st Duke of Devonshire, and great-granddaughter of Alice Fanshawe (1598-1667). In 1695 she married John Fanshawe of Parsloes, and probably commissioned this portrait to mark her marriage.

The version held by Melbourne Hall is identical to the one at Valence House Museum, and it is likely that both copies were made at the same time; one to hang at her family home and the other at her new home, Parsloes Manor House. 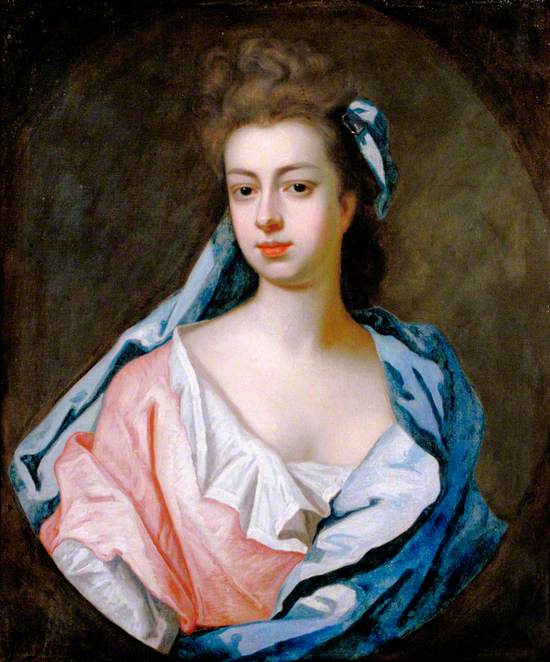 Although attributed to the same artist as the Valence House and Melbourne Hall versions, there are noticeable stylistic differences in this painting. This suggests that it may be a contemporary replica.

The surviving Fanshawe collection seems to contain many contemporary replicas. At least two other versions of Thomas (1533-1601) by Marcus Gheeraerts II are known to survive. Their artists are unknown, and each painting has slight differences; in the placement of the inscription and how much of the chair back is visible. It is unknown who commissioned these copies. 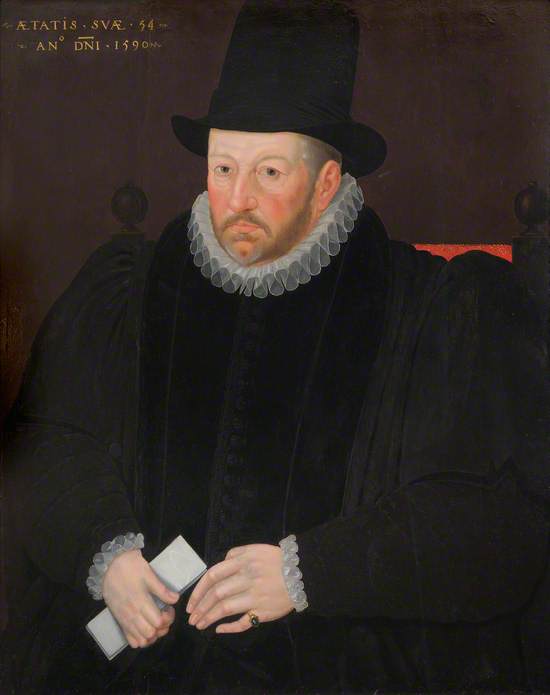 Thomas Fanshawe became Queen’s Remembrancer in 1568, the 2nd of nine members of the Fanshawe family to hold the post. 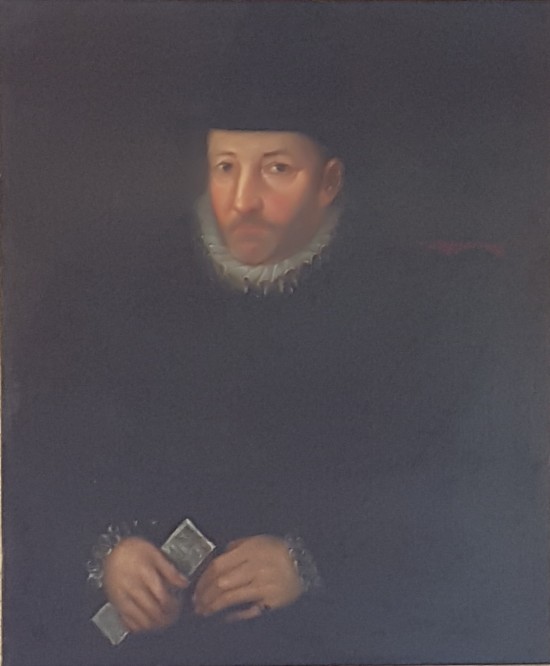 In this version, very little of the red chair is visible behind Thomas's left shoulder. The paper in his hand is also blank. 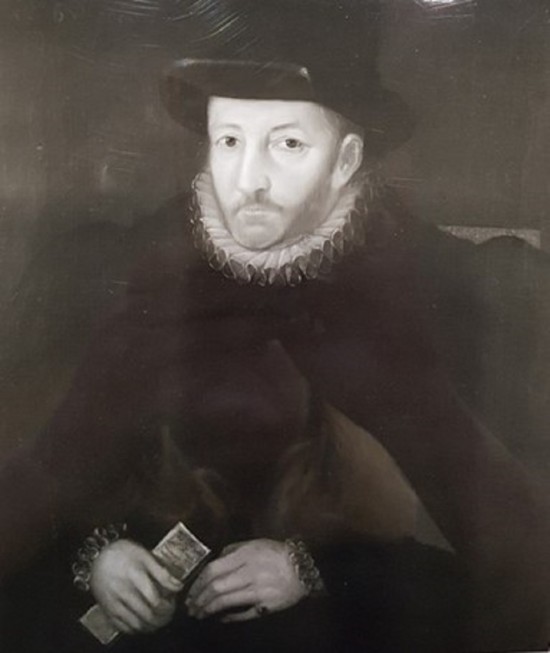 In this version of the portrait from Exton Park, writing on the paper held in the sitter's hand identifies this as Thomas Fanshawe.

Thought to have originally hung at Jenkins Manor House, the main Fanshawe home in Barking, this contemporary replica is now displayed at Exton Park. Home to the Earls of Gainsborough, the painting may have ended up there via the marriage of Susanna Fanshawe (1661-1714), daughter of Sir Thomas Fanshawe of Jenkins, to Baptist Noel in 1682. Their son became the 3rd Earl of Gainsborough.

Although donated to Valence House as Henry Fanshawe (1506-1568) the portrait is actually a bust-length replica of a portrait of Thomas Egerton, 1st Viscount Brackley held by the National Portrait Gallery. Brackley was one of the leading figures at the court of Elizabeth I when Thomas Fanshawe (1533-1601) was serving as Remembrancer. It’s possible that Thomas acquired a copy of a portrait of Brackley to pay homage to a man who was his social superior. 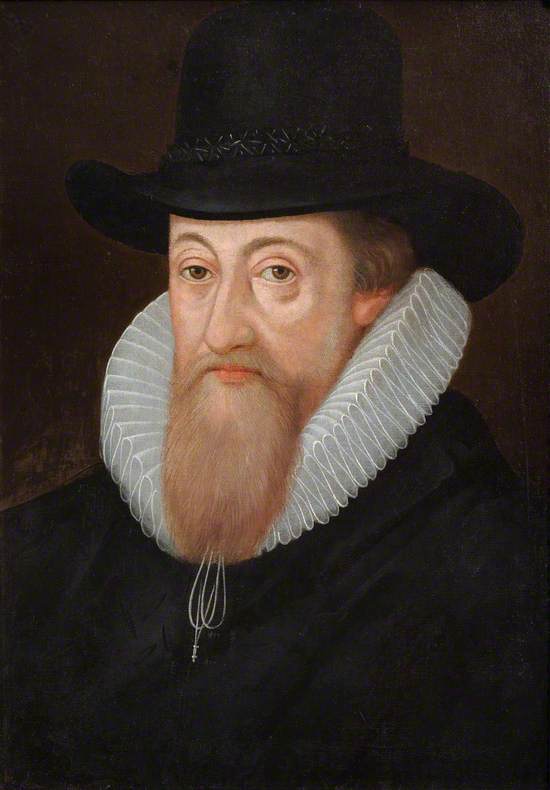 Henry Fanshawe came to London in the 1520s to take up a post as Clerk in the Exchequer under King Henry VIII. He became Queen Elizabeth I’s Remembrancer (a type of tax collector) in 1566. He owned Valence House from 1566 until his death in 1568 when it passed to his youngest daughter Susanna.

Although donated to the museum in 1963 as a portrait of Henry Fanshawe, it is almost certainly a contemporary replica of a portrait of Thomas Egerton, 1st Viscount Brackley. 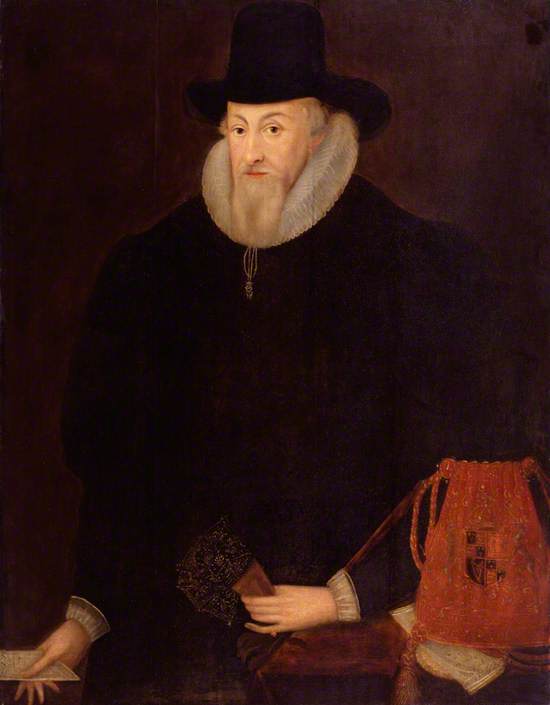 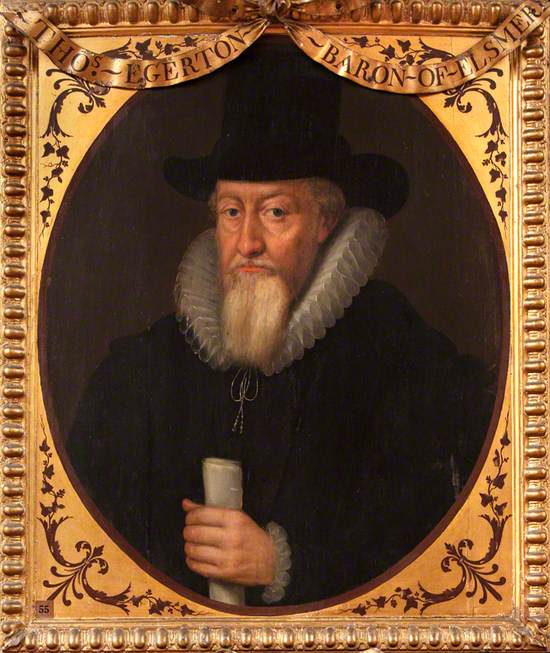 Many different versions exist of the Thomas Egerton portrait, demonstrating the popularity for owning an image of this influential figure. 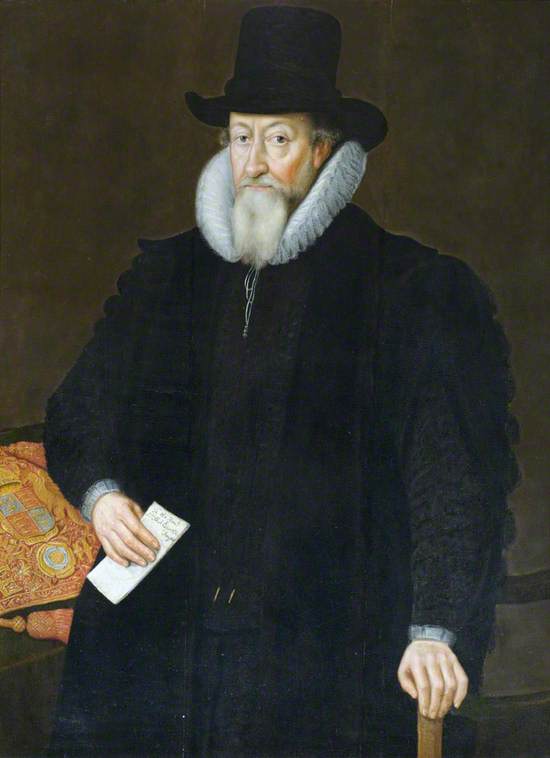 Over the generations, the Fanshawe collection was broken up as the portraits passed to different members of the family. When Thomas Lewis Fanshawe died in 1858 his portrait collection at Parsloes Manor House was divided between his four children. A number of copies made during this period survive. It is possible that family members commissioned copies of the portraits that they were fond of but no longer had access to.

Sarah, Viscountess Fanshawe (1642-1717) was a renowned beauty of her day, but the rather poor 19th century copy held by Valence House Museum does little to prove this. Another, finer version by the Circle of Mary Beale is likely to also be a studio copy or contemporary version of a now lost original. 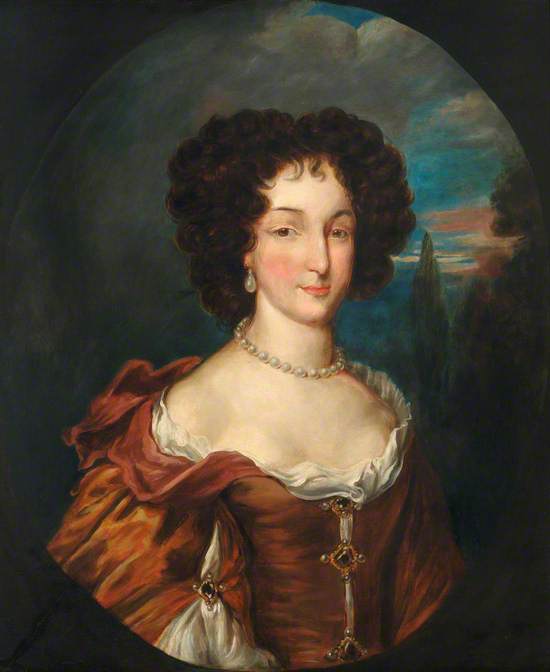 Sarah Evelyn was the cousin of John Evelyn, the famous diarist. It is from Sarah that Evelyn becomes a popular first name for members of the Fanshawe family. In 1665, five months after the death of her first husband, Sarah married Thomas 2nd Viscount Fanshawe. 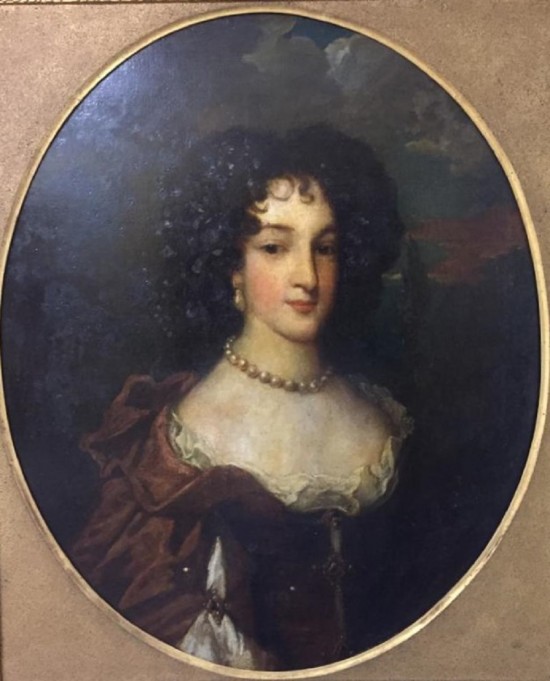 This is possibly a version of the portrait mentioned in the 1907 edition of The Memoirs of Ann, Lady Fanshawe, referred to as being at Dengie House, Maldon, Essex and thought to be by the Circle of Mary Beale.

The portrait of Richard Fanshawe junior (1648-1659) is a study of a larger double portrait by Sir Peter Lely, that depicts him with his father. It has been suggested that Richard Jr. was added to the painting after its completion, following his death at the age of 11. Someone was clearly so taken by this poignant image that they had only this small part of the larger portrait copied – a lasting tribute to a life cut short. 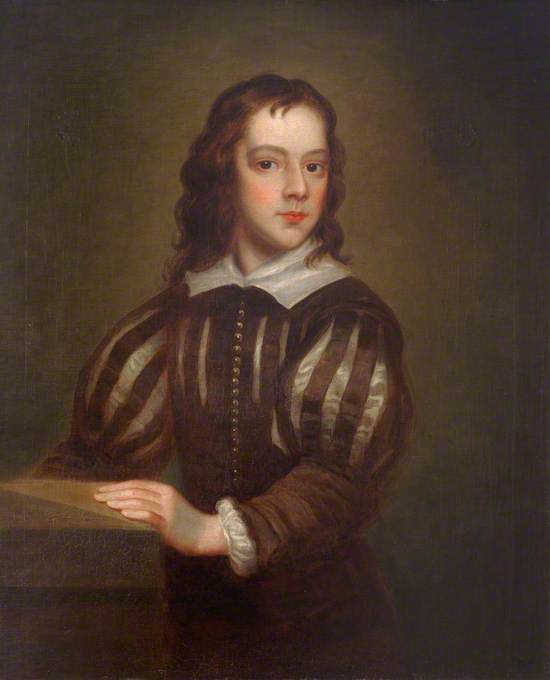 Richard was the third son of Sir Richard and Lady Ann Fanshawe, and the first of three to be called Richard. He died at age 11 from smallpox. In her Memoirs, Lady Ann recorded that ‘though I neglected ym [them]’ (her two daughters aged six and seven were also suffering the same illness), ‘and day and night tended my dear son, yet it pleased God they recovered and he dyed.’ 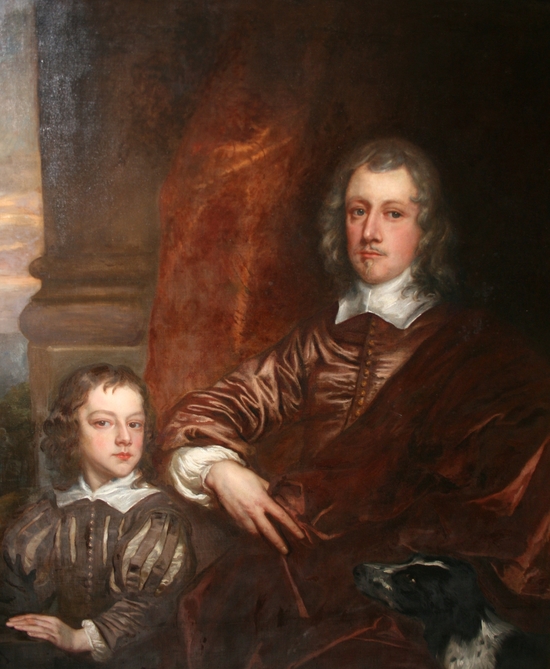 It is believed that the image of Richard Junior was added to this portrait after his death—the fact that he is shown facing away from his father is thought to suggest that he was already dead.

It is clear from the number of copies that survive that the Fanshawe family were prolific copiers of their portraits. However, this project has left us with more questions that need to be answered:
What other artworks were the family collecting?
Did their collection reflect those of other leading families of the day?
Were they collecting other artworks such as landscapes, sculptures, etc?
Which of the Valence portraits hung at Parsloes Manor House?
How many of these were sold in 1918 when Parsloes Manor House was sold for demolition?
Who owned the Valence portraits?