Charles H. Mackie: Colour and Light is a temporary exhibition at the City Art Centre in Edinburgh. It explores the life and career of the Scottish painter and printmaker Charles Hodge Mackie (1862 – 1920), a figure who was well-known during his lifetime, but whose posthumous legacy has slipped into obscurity.

The exhibition showcases the breadth of Mackie’s creative vision and talents, featuring over fifty artworks from public and private collections across the UK.

This online Curation presents a selection of paintings that feature in the show.

The Scottish painter and printmaker Charles Hodge Mackie (1862 – 1920) was one of the most versatile artists of his generation. Based in Edinburgh, he embraced an international outlook, drawing inspiration from French Symbolism, Japanese art, the Celtic Revival movement, and the landscapes of his European travels. His experimentation with different media was similarly wide-ranging, covering murals, woodcut prints, book design and sculpture, as well as oil paintings and watercolours. Since Mackie's death in 1920, many of his artworks have been lost or destroyed, and his achievements have been unjustly forgotten. The exhibition Charles H. Mackie: Colour and Light aims to bring this artist back to wider public and critical attention. 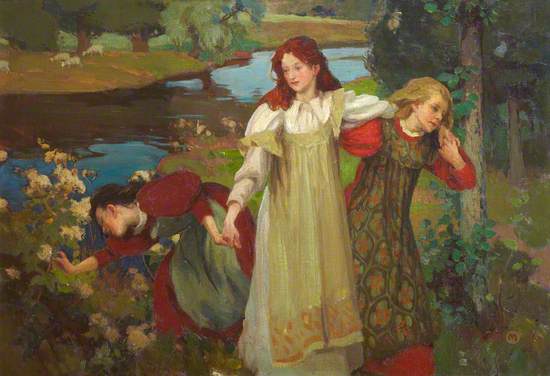 As a student, Mackie felt the limitations of a formal academic training. Frustrated by his tutors’ conservatism, he sought more direct and progressive sources of inspiration.

In 1892 he travelled to Brittany, where he met the French Symbolist Paul Sérusier. Mackie was intrigued by Sérusier’s creative and philosophical approach, and soon began experimenting with bold colours and decorative forms. Through Sérusier, he was introduced to Édouard Vuillard and Paul Gauguin.

Mackie’s Symbolist awakening coincided with his involvement in the Celtic Revival movement in Edinburgh. He made murals, book illustrations and paintings based on Celtic history, folklore and song. This canvas marks the culmination of this important period in his career. 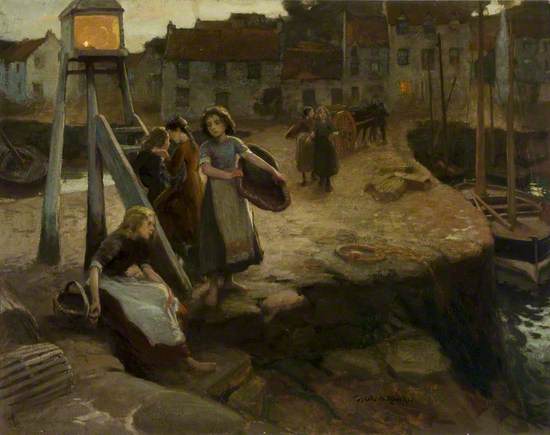 Fisher Girls Waiting for the Boats

Towards the end of the 1890s, the network of artists who had forged the Celtic Revival movement began to disperse, and opportunities for collaborative projects diminished. Mackie turned his attention to easel painting, where he found a growing audience.

This large composition illustrates his move towards a more subtle style of painting. The spatial arrangements and distinct outlines still echo his earlier Symbolist experiments, but the subdued palette and sensitive evocation of light give the work a more naturalistic flavour. 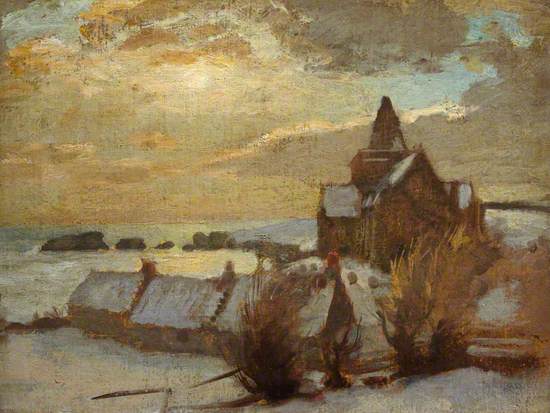 Rural Scottish landscapes were a life-long source of inspiration for Mackie. Over the years he worked in East Lothian, Kirkcudbright, Perthshire and the Scottish Borders. Fife was another favourite location.

This painting presents a snow-covered scene of the parish church at St Monans, in the East Neuk of Fife. Weak winter sunlight reflects on the waters of the North Sea in the distance.

In 1899 Mackie presented a group of St Monans views at the Royal Scottish Academy in Edinburgh. He had been exhibiting there on a regular basis since 1880, and was elected as an Associate member in 1902. 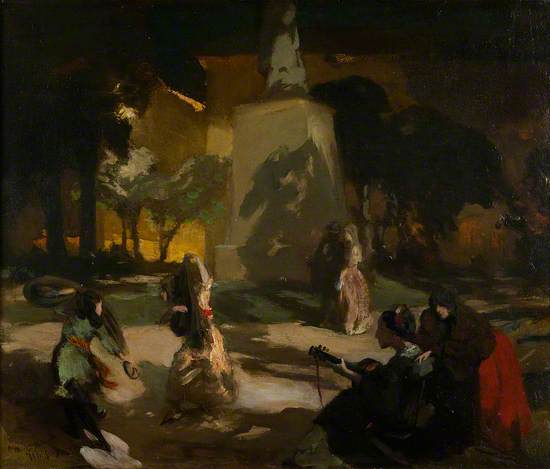 In 1903 Mackie journeyed to Spain with the English artist Lionel Crawshaw. Spending time in Toledo and Madrid, he found the warm climate ideal for painting watercolours in the open air. He also produced a number of oils, including a copy of the 17th century painting Las Meninas by Diego Velázquez.

This atmospheric night-time scene was inspired by his experiences in Madrid. Two figures are shown performing an energetic dance to the music of a guitar. The sense of drama is accentuated by the strong contrasts between the areas of deep shadow and shafts of artificial light. 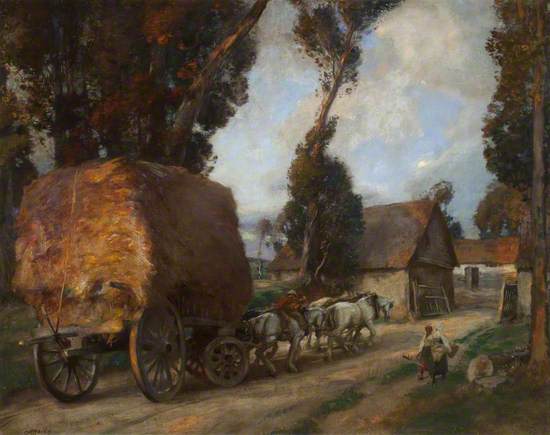 As a mature artist, Mackie spent many summers in northern France, accompanied by his wife Anne and son Donald. The family established a base near Étaples, from which he could explore and paint the local countryside.

Mackie found the farmyards of Picardy and Normandy especially attractive. Their traditional stone buildings had a timeless quality, and farming practices seemed untouched by modern industrialisation. The subject-matter chimed with his long-standing admiration for 19th century French Realist painters like Jean-François Millet and Jean-Baptiste-Camille Corot.

Here, he depicts agricultural labourers returning home from a day in the fields. His use of warm-toned highlights suggests the daylight fading with the setting sun. 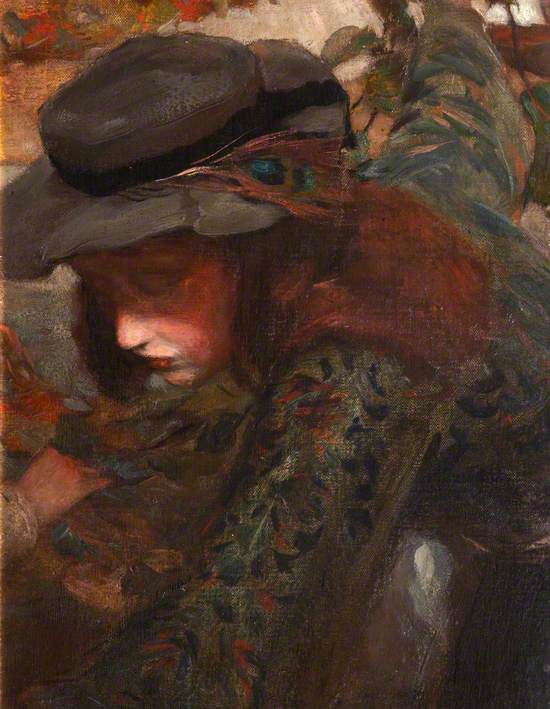 This small portrait was originally part of a much larger multi-figure composition entitled For Harvest Festival. The full-sized painting showed a group of girls in an interior making harvest decorations. It was exhibited at the Royal Scottish Academy in 1907, where the art critic for the _Scotsman _praised its ‘rich colour and light’. 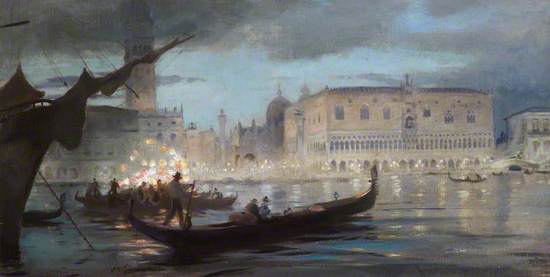 Between 1908 and 1914 Mackie spent much time in Italy. His travels were made possible by the support of loyal patrons, including Andrew Carnegie, Ernest Auldjo Jamieson and John James Cowan. With a regular income from sales of work, he was able to make frequent and prolonged trips abroad.

He visited Venice for the first time in 1908, and was immediately captivated by the city’s architecture and atmosphere. A series of spectacular oil paintings, watercolours and woodcut prints followed.

This is one of Mackie’s earliest major Venetian works. Completed in 1909, it was bought soon afterwards by the Scottish Modern Arts Association, an organisation established in 1906 to build a national collection representing the best of Scottish art. 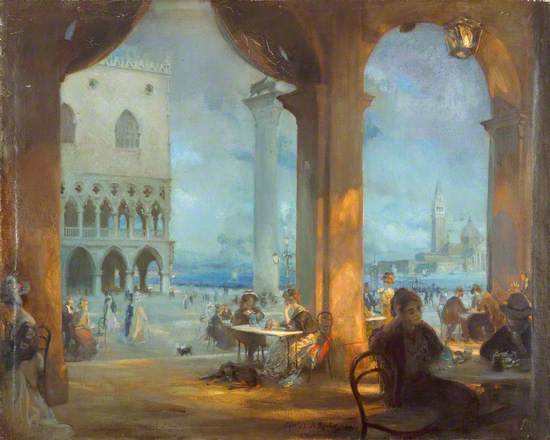 Mackie was fond of depicting evening scenes in Venice. La Piazzetta portrays the area adjacent to the city’s famous Piazza San Marco, framed by the arcade of the Biblioteca Marciana. It is an evocative image of café life. The presence of lamps in the deepening twilight allows the artist to articulate the delicate effects of transitory light and shadow.

This painting was first exhibited in 1910 at the Royal Scottish Academy, where it was much admired. A review in The Studio commended Mackie’s efforts, stating that ‘in brilliance and subtlety, [the artwork] reaches a higher level than he had previously attained as a colourist’. 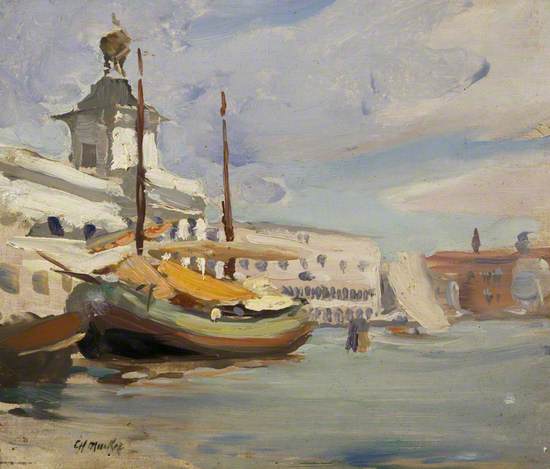 This oil sketch provides a swift impression of Venice: boats bobbing gently in the lagoon as bright sunlight strikes the ornate architecture. The broad brushwork suggests that it was executed in a single sitting.

Although Mackie usually travelled with family and friends, his art always took precedence over leisure and socialising. As his wife later recalled: ‘he worked day after day, all through the summer in intense heat when even the Venetians groaned under the burning sun or fled to the mountains, grudging the time it took for a swim at the Lido’. 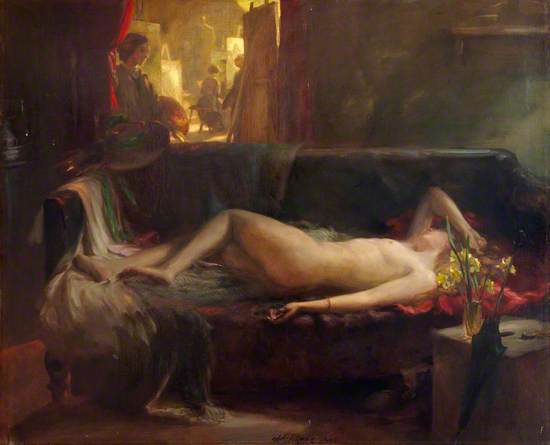 In 1909 Mackie was appointed as a visiting tutor at the Life School of the Royal Scottish Academy. He remained in post for only a year, finding it difficult to balance teaching commitments with his own artistic practice. However, the episode provided a stimulus to hone his life drawing technique and complete some large-scale oil paintings of allegorical nudes.

‘Artis Ancilla’ is a phrase derived from the Roman philosopher Lucretius, which loosely translates as the ‘Handmaid of Art’. In this work Mackie presents an artist’s model in the role of ‘handmaid’. Resting between modelling sessions, she is observed by a young woman with a paint palette, who leads the eye towards a bright teaching studio beyond. 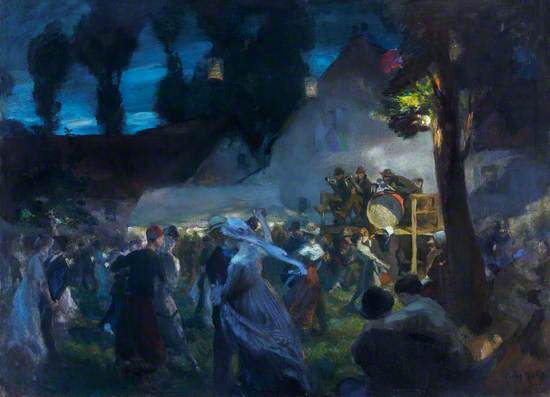 Mackie made his final journey to France in 1914, a few months before the outbreak of the First World War. While staying near Étaples, he witnessed a local village festival, which he immediately determined to paint.

The finished work is now untraced, but this second version was completed a few years later, successfully recreating the energy of the scene. Couples are shown dancing in the night air, while a band performs on a raised platform. The combination of natural and artificial light sources allows the artist to demonstrate his masterful handling of colour and tone.

Mackie presented this canvas to the Royal Scottish Academy following his election as an Academician in 1917. 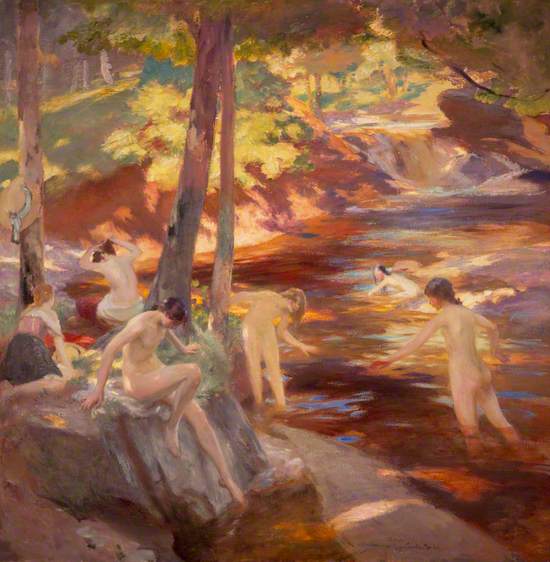 The Bathing Pool was Mackie’s last major painting. An ambitious composition that belied his failing health, it was left unfinished on his death in July 1920. His wife Anne attempted to complete the artwork, inscribing both of their signatures in the bottom right-hand corner.

After the artist’s death, his family and friends paid tribute to him with a memorial exhibition in Edinburgh. The display, which was staged in March 1921, featured over ninety artworks in a range of media, reflecting the variety and depth of his many achievements.