The Munnings Art Museum is at Castle House, the former home of Sir Alfred Munnings. The museum showcases the life and work of this prolific East Anglian artist and Past President of the Royal Academy. Paintings, drawings and sculpture are selected for changing displays from the museum’s large and significant collection of Sir Alfred's work.

Art Unlocked is an online talk series by Art UK in collaboration with Bloomberg Philanthropies. This Curation is based on a talk by Jenny Hand, Director of the Munnings Art Museum, on 25th August 2021. You can find a recording at https://youtu.be/wJlPnswY8Fw 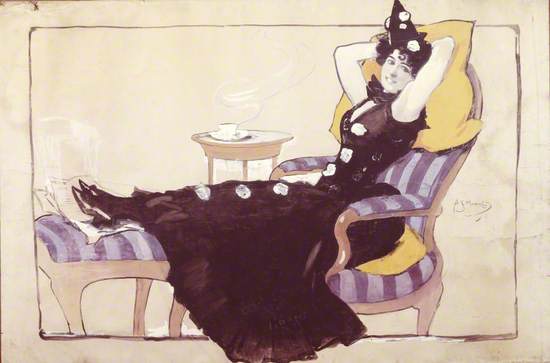 In the 1890s Alfred Munnings was apprenticed to the lithographic printer Page Bros and living in Norwich. He was introduced to a world of stories through books from the Free Library and trips to the theatre. His imagination was filled with dramatic characters and costumed players. This design for a poster uses the recognisable figure of Pierrette with pom-poms on her dress and pointed hat.

Munnings describes the appeal of his imagined, often costumed, caricatures to the firm of Caley’s, who made chocolates and crackers: “I was doing work which they could not, bringing poster and figure design work to a firm that had never before done anything of the kind.” 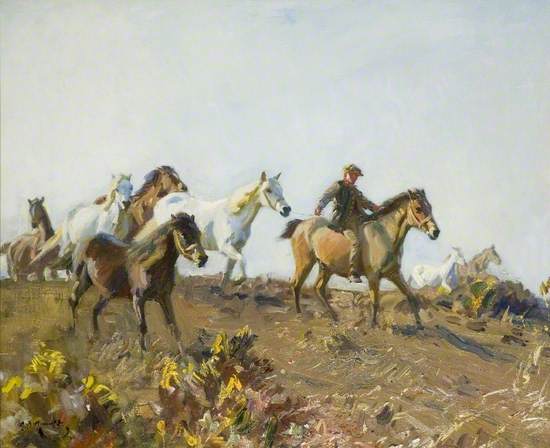 In the first years of the 20th century, Munnings experimented with pastels, watercolours and oil paint. Drawing and painting, either in his studio or outside ‘en plein air’, he began developing his own inimitable style and techniques.

Munnings painted a series of canvases featuring a Romani caravan and ponies when working in the Ringland Hills, west of Norwich. The young rider in this picture is called ‘Shrimp’. He became a favourite model of Munnings who described him as: “a good lad, a son of the wild. He could neither read nor write, and had no need of either. The best model I ever had.” 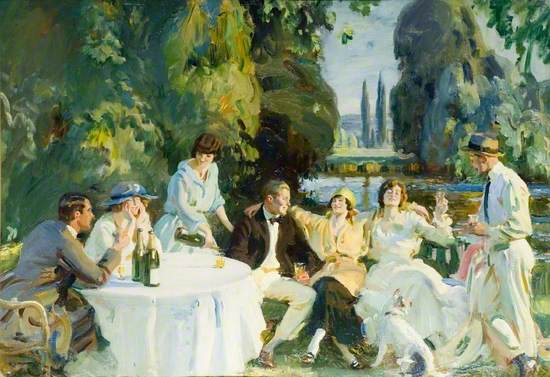 In 1919 Munnings acquired a London studio in Chelsea, from where he painted many commissions. The location for this picture featuring his artist and model friends is Tagg’s Island. The island nestles in the Thames a short distance from Hampton Court.

Variously titled Tagg’s Island, The Models Day Out and Picnic by the River, this was a work Munnings did for his own pleasure in a loose and painterly style. Compositionally the figures are threaded together by linked and overlapping arms, creating a coherent grouping, harmonised by repeated colours through the shadows on the protagonists.

In his autobiography Munnings reminisced: “Where are all the jolly crew-friends of my bachelor life-who sat for it: Louie, Connie, Joyce, Mercer, Water 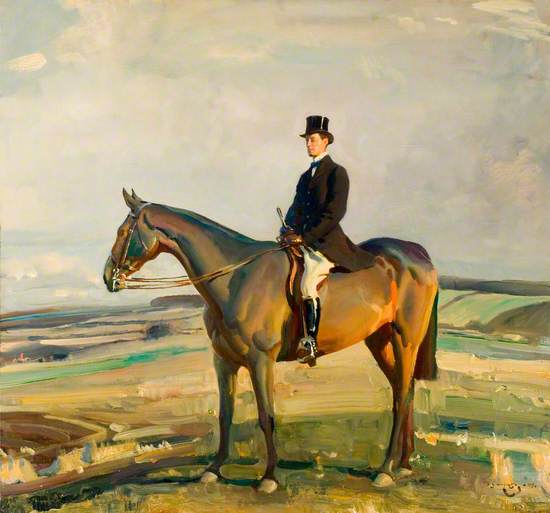 This is one of Munnings’ first painting commissions after the First World War; a direct result of the accolade he received for his equestrian war portraits at the Royal Academy Exhibition in early 1919. It was Sir Raymond Greene who arranged for Munnings to meet Major Tommy Bouch, Master of the Belvoir Hunt of whom Munnings commented:

“…this was an introduction to a man who was offering more than I could ever have expected – board, lodgings, models without end..”.

Letters in the museum’s publication Yours With Love A J are written from Woolsthorpe, Major Bouch’s, home. The book includes other correspondence from the homes of patrons who constantly sought Munnings skills as an equestrian portraitist in the 1920s. 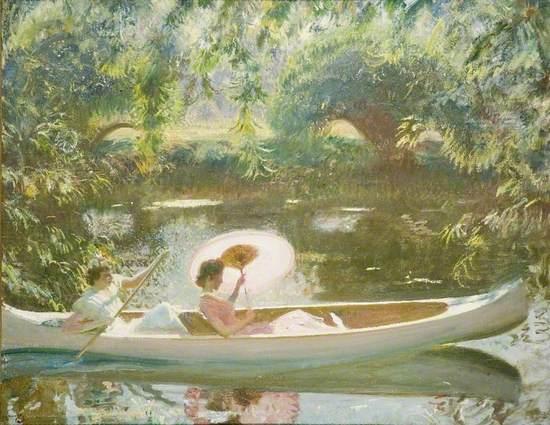 Munnings held an enduring fascination for the river Stour, throughout the forty years that he lived close to it, on the Essex/Suffolk border.

September Afternoon portrays two young ladies gliding along the Stour in a canoe on a warm September day. The painting evokes varying degrees of late summer, drowsy heat, created by Munnings’ consummate skill and bold use of colour when representing light and shade.

In the 1930s, at the height of his career, Munnings’ equestrian portraits attracted criticism for being repetitive and too highly finished. September Afternoon, however, was painted for his own pleasure and shows an immediate return to the painterly and impressionistic style of his early career. 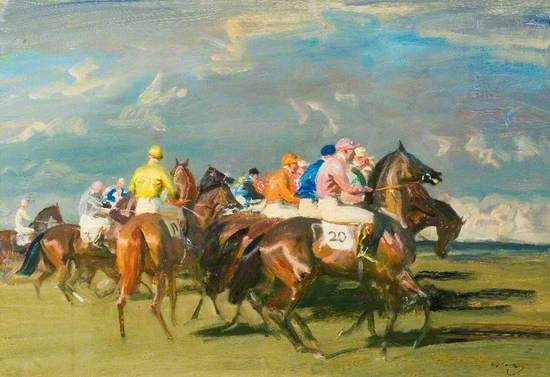 Munnings is perhaps best known for his paintings of the start of a race at Newmarket. In later life he often travelled to Newmarket racecourse to relax, socialize and paint.

Standing at the side of the track Munnings captured the scene with rapid sketches which were used to create finished compositions back in the studio. He loved to convey the intensity of the occasion, the light, colour and movement which appeals to all the senses.

He wrote, "Each start was a fresh picture for me, as they have been, meeting after meeting, year after year."

Inscribed on the back of this painted study in Munnings' own handwriting is "sketch of start done in Studio on Heath after the racing and seeing 6 starts, 1951."