Swindon’s Collection charts the development of British art from the 1880s until today. Paintings, works on paper and studio ceramics demonstrate the abundance of styles and ideas that define art in Twentieth Century Britain. The collection includes work from early modernist artists from the Camden Town Group and the Bloomsbury Group, through to Pop Art, Minimalism and Conceptualism.

Art Unlocked is an online talk series by Art UK in collaboration with Bloomberg Philanthropies. This Curation is based on a talk by Katie Ackrill, Project Engagement Officer - Art on Tour at Swindon Museum and Art Gallery, on 4th August 2021. You can find a recording at https://youtu.be/NHVIsCfo9ls 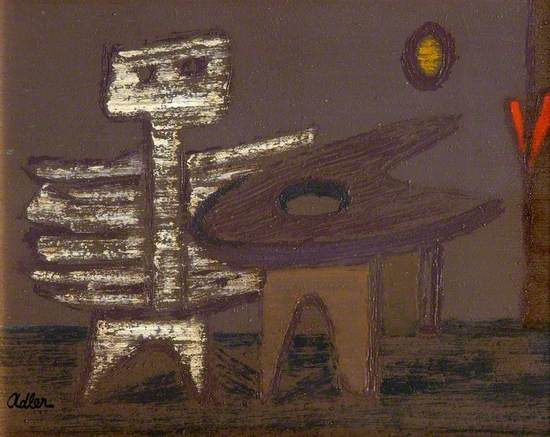 As a Jew and a well-known abstract artist in Dusseldorf, Jankel Adler was forced to flee Germany in 1933. After travelling around Europe and serving in the Polish Army during WWII, he made his way to London. There, Adler met art collector Jimmy Bomford, a generous benefactor of Swindon’s art collection. In 1945, Bomford provided him with a house and studio in Aldbourne, Wiltshire.

Composition alludes to the devastation experienced by Adler, who had been branded a “degenerate artist” by the Nazis, and whose nine siblings were killed during the Holocaust. However, the yellow circle in the top right corner suggests a hint of optimism. 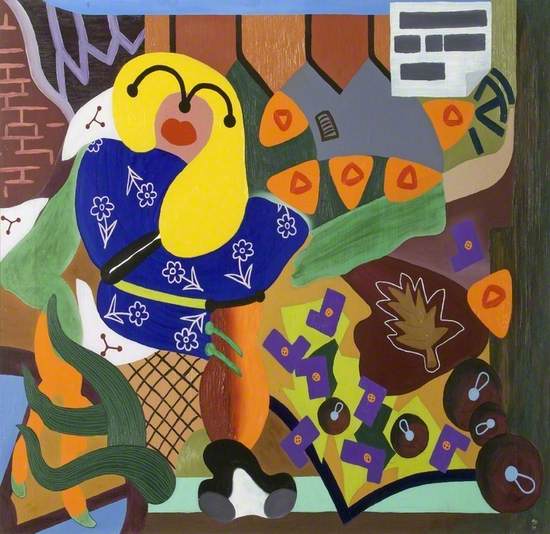 This vibrant painting brings together two public figures, connected by their childhood in Swindon. Desmond Morris is a Zoologist, broadcaster and Surrealist artist, and his inspiration was the Swindon-born actress and singer Diana Dors. Morris and Dors shared a relationship as teenagers living in the town during World War II. Girl Selling Flowers was painted shortly before Dors became a movie icon recognisable for her red lips and blonde hair.

As a young man living amidst the destruction of war, Morris was influenced by the fantastical imagery of the rebellious Surrealists who reacted to World War I. Girl Selling Flowers demonstrates an early attempt to make strange shapes and patterns, and transform figures into biomorphic forms. 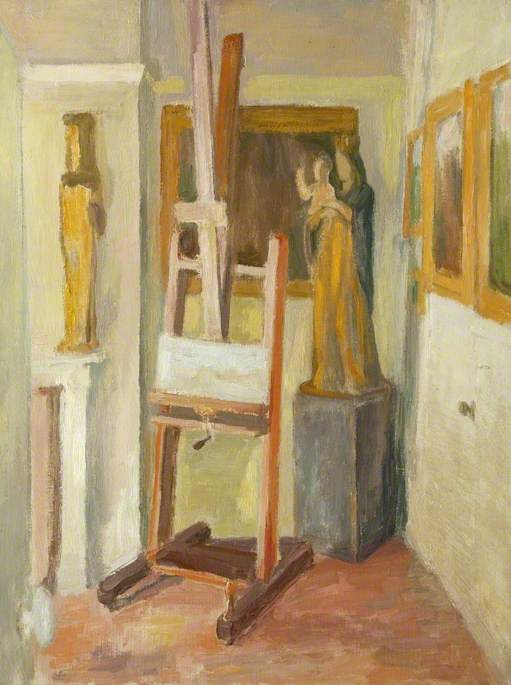 Helen Lessore is more often noted for her work as a gallerist than an artist. She became director of the Beaux Arts Gallery in 1951, and transformed it into a space that supported emerging figurative painters, many of whom would go on to become big names in British art.

In 1961, when the Beaux Arts Gallery closed, Lessore was once again able to focus on her career as an artist. ‘Studio’ is a quiet and contemplative painting. Lessore decided to paint the scene when it was bathed in light one sunny morning, infusing the scene with “a new entity”. There is some debate over what the scene depicts. Records state that it is the studio of her son John Lessore at their home in Camberwell. However, it may in fact be Helen Lessore’s Drawing Room. 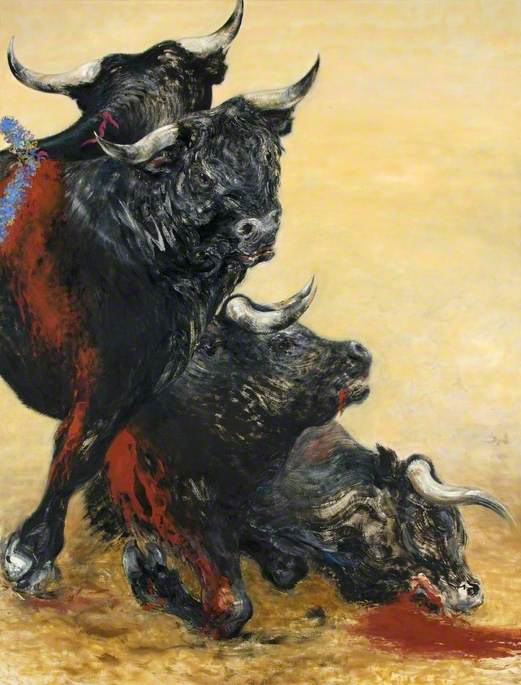 Descent of the Bull’s Head was painted in 1985, after the artist witnessed Bull Fights during a trip to Barcelona. Hambling was struck by the way the bull enters the ring proud and powerful, but becomes weakened and humiliated during the course of the short fight. The painting, which depicts four stages of the bull’s defeat, is about the brutish side of human nature. Over 35 years on, the painting speaks even louder volumes about human relationships with the planet and the other creatures that inhabit it.

Descent of the Bull’s Head entered Swindon’s Collection in 1989, toward the end of the decade in which Hambling became a public figure. In 1980 she had been selected as the first Artist in Residence at the National Gallery. 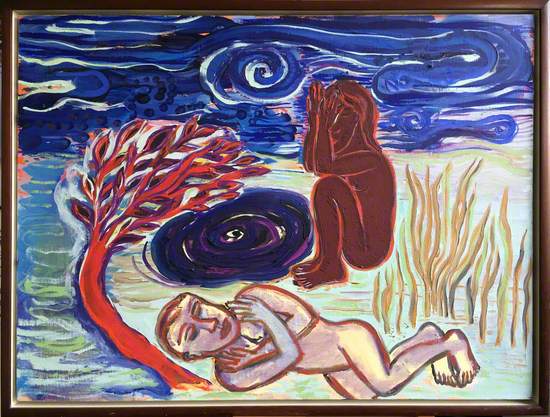 In 1994 Swindon became the first public art collection to own a piece by Eileen Cooper. ‘Separate Ways’ was acquired under the advice of Richard Morphet from the Tate. In 2017, ‘Play Dead II’ also entered the collection, following a retrospective of Eileen Cooper’s drawings at Swindon Museum and Art Gallery.

This painting demonstrates Cooper’s instinctive approach to colour and bold use of line. It depicts two figures in a tumultuous landscape, covering their eyes and bodies against an unknown threat. Cooper’s work comes from her personal experiences, and ‘Play Dead II’ is about helping her son come to terms with the concept of death. The swirling shape on the ground is symbolic of an intense energy source in this highly emotive scene. 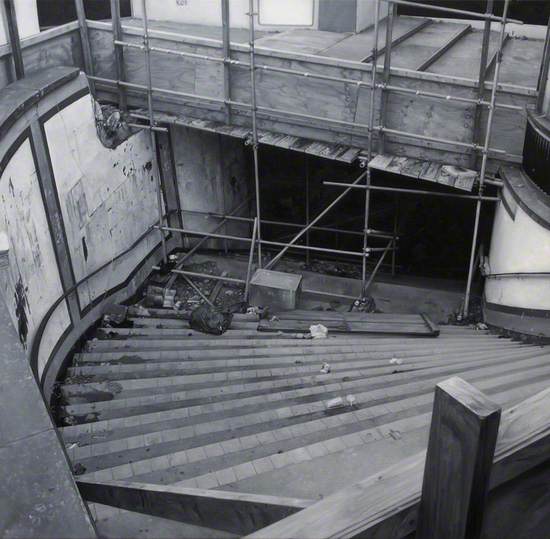 Nicholas Middleton engages with art theories about modernist ideals of flatness and the nature of the photographic image. Subway demonstrates his intense photo-realist painting style.

The viewer’s perception is teased with an image that initially appears to be a photograph, but slowly reveals the marks of the artist’s brush. We enter an intense examination of the surface to reveal its trick, and in doing so spends time with a scene of urban ruin and abandonment that otherwise goes unnoticed.

Subway was one of forty artworks gifted to Swindon’s Collection by the Contemporary British Painting group in 2013. Staff worked closely with one of CAS’s founders Robert Priseman, on what is often referred to as the Priseman Donation.