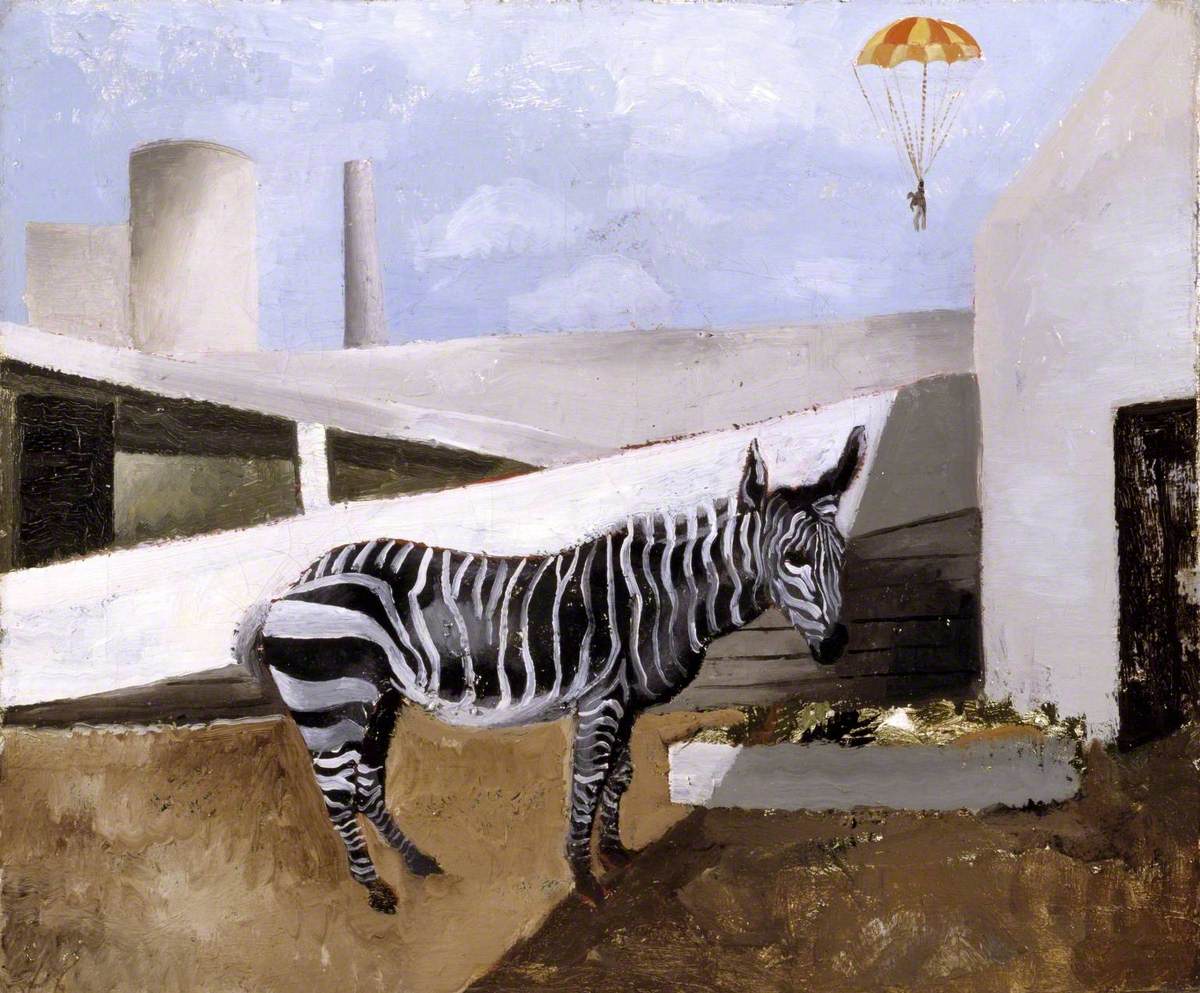 'Zebra and Parachute' was one of Wood’s last paintings. The image brings together an unusual collection of elements that give the work a surrealist flavour. A zebra appears against the backdrop of a modernist building. The animal stands on the building’s roof terrace near a raised flowerbed. The distinctive lines of the architecture, which include strong diagonals produced by a zig-zagging ramp and the cylindrical forms of two chimneys or towers in the background, suggest an almost abstract arrangement that contrasts with the altogether different pattern produced by the zebra’s stripes. A dark shadow falls just in front of the zebra, casting the right-hand zone of the terrace into semi-darkness and adding to the mysterious atmosphere of the image. In the sky above this scene, a parachute is descending. The tiny figure that dangles in the parachute harness appears limp and lifeless.

Read more
The distinctive architecture of the building in Zebra and Parachute identify it as the Villa Savoye, near Paris, designed by Le Corbusier (1887–1975). The villa, begun in 1928, was finished in 1931, and construction was well underway at the time Wood produced this painting. In the context of this work the Villa Savoye’s modernism suggests civilisation and the zebra is a signifier of the exotic. Wood was staying in Paris when he painted this work. He knew the city well, having first relocated there from London in March 1921. Once in Paris, he studied drawing for a time at the Académie Julian and moved easily in influential artistic and social circles, where he met artists such as Pablo Picasso and Jean Cocteau.

During the latter part of the 1920s he worked in both France and England, including in the Lake District and St Ives, Cornwall, with the artists Ben and Winifred Nicholson. He returned to Paris in the summer of 1930, arriving on 22 July and leaving again for England just under a month later on 19 August. He painted 'Zebra and Parachute' at some point between these dates. Along with this work, Wood produced at the same time the closely related painting, 'Tiger and Arc de Triomphe' 1930 (The Phillips Collection, Washington DC). In it, he set up a similar juxtaposition of the exotic and the man-made as that produced in 'Zebra and Parachute', this time placing a lazily sprawling tiger and a sitting leopard against a wooded background with a view of the Arc de Triomphe monument behind them. Both paintings are reminiscent of the work of Henri Rousseau, known particularly for the depiction of animals in jungle settings in a naïve style.

The parachute in T12038 is perhaps evocative of Rousseau’s late landscape painting 'View of the of the Bridge at Sèvres and the Hills of Clamart, St Cloud and Bellevue' 1908 (Pushkin Museum of Fine Arts, Moscow), which includes in the sky a biplane, a hot-air balloon and an airship (Button, 2003, p.61, reproduced p.63). In 'Zebra and Parachute', the effect of strong shadow cast across a built environment resonates with the work the Italian painter Giorgio de Chirico, with whose art Wood was familiar. The surrealist aspects of 'Zebra and Parachute' and 'Tiger and Arc de Triomphe' suggest that Wood was striking off in a new direction at this point in his career. However, he tragically died on his return to England. Suffering the effects of opium withdrawal, which produced feelings of being pursued, he threw himself under a train at Salisbury station on 21 August 1930.