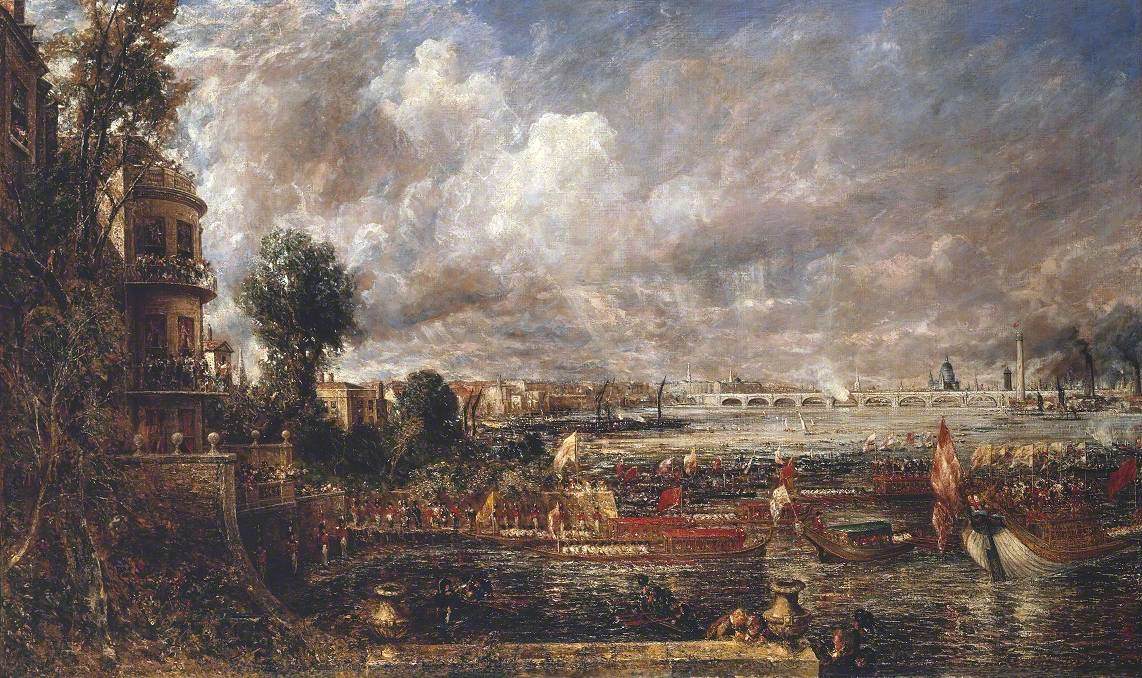 Over seven feet in length, this is the largest of Constable's exhibition canvases and the result of 13 years of planning. It commemorates the opening of Waterloo Bridge - and the second anniversary of the Battle of Waterloo – on 18 June 1817, an occasion celebrated with tremendous pomp and ceremony which Constable attempted to recapture in a whole series of drawings and oil sketches, dating from 1819 onwards. Constable moved from Suffolk to London in 1817 and presumably witnessed the festivities, but it was another two years before he conceived the idea of capturing the event on canvas. The subject offered Constable, a staunch royalist, the opportunity to record for posterity a significant historical occasion.

Read more
The picture shows the Prince Regent about to board the Royal barge at Whitehall stairs. The Lord Mayor's barge is situated prominently in the right foreground, its billowing red standard leading the eye back to the pale horizontal line of the bridge and the distant dome of St Paul's Cathedral. Beyond the left-hand end of the bridge is Somerset House, the home of the Royal Academy, where the picture was exhibited in 1832. By comparison with earlier versions of the subject, the onlooker is distanced from the main events and greater prominence is given to the river and the vast expanse of sky.

The combination of dark foreground and a raised viewpoint draws the eye towards the distant bridge and the gathering clouds. Towards the centre of the bridge a puff of smoke indicates the firing of a gun salute. The foreground is separated from the main scene by a long parapet surmounted by urns, and Constable draws the viewer's attention to two small boys, engrossed in some activity of their own, oblivious of the day's events.

One of Constable's later works, the picture owes a debt to the Thames pictures of Canaletto and the great 'historical' landscapes of Claude Lorrain. Technically, the picture is distinguished by its animated surface and variety of handling. The thin brown underpainting is visible in places; elsewhere Constable has used the palette knife to build up a thick impasto. The vigorous application of paint is particularly obvious in the foreground of the picture, where bold touches of red, green and white bring the picture to life. On witnessing the brilliant colour of Constable's painting, hanging beside his cool-toned seapiece, 'Helvoetsluys' (private collection, London), at the Royal Academy exhibition, Turner is said to have added a bright red buoy to his own work, in order to redress the balance.

Purchased with assistance from the National Heritage Memorial Fund, the Clore Foundation, the Art Fund, the Friends of the Tate Gallery and others 1987