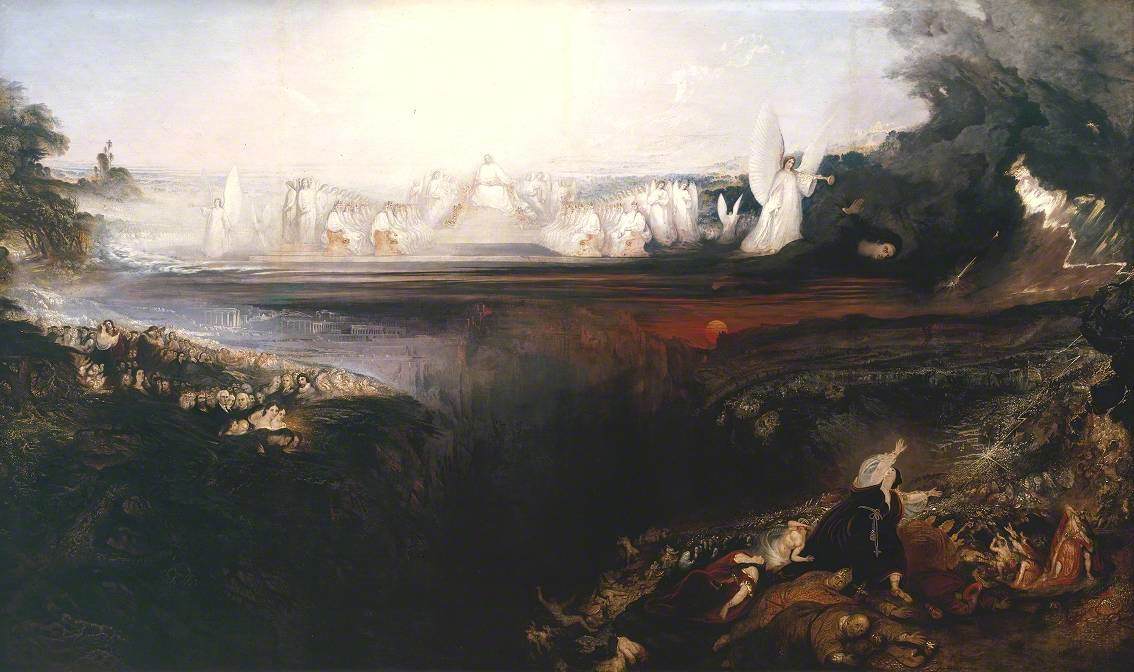 This and two other pictures, 'The Great Day of His Wrath' (Tate Gallery N05613) and 'The Plains of Heaven' (Tate Gallery T01928) compose a triptych, and are the last major works Martin produced before his death. They are generally considered among his most important achievements, possibly his masterpiece. The subjects are taken from The Book of Revelation. 'The Last Judgement' illustrates the central event of the Book, and is composed from various passages in the narrative.

Read more
On a throne in the heavens sits God in judgement, surrounded by the four and twenty elders. The four angels have sounded their trumpets after the opening of the Seventh Seal. Below on the right the forces of evil commanded by Satan are defeated; the armies of Gog and Magog tumble into the bottomless pit. To the left on Mount Zion are the good, already in the 'plains of heaven' and awaiting the call to appear before the throne. The principal figures were identified in an engraved key published in 1855 by Leggatt, Haward and Leggatt to accompany the picture. The damned include richly dressed women, notably Herodias's daughter and the whore of Babylon, lawyers and churchmen who have sought only worldly wealth. The saved, at God's right hand, are anonymous figures of virtuous women and innocent children, true lovers, martyrs, philanthropists, and foreground, portraits of the famous. Among the good Martin has included a high percentage of artists and poets, as well as statesmen and philosophers. These include Thomas More, Wesley, Canute, Dante, Washington, Copernicus, Newton, Watt, Chaucer, Tasso, Corneille, Shakespeare, Michelangelo, Rubens, Dürer and Wilkie. The great men are ranged in a timeless tableau; Martin reproduces their best known images. Included among the contemporary detail is a railway train plunging into an abyss, its carriages marked 'London', 'Paris', and so on. Further reading: William Feaver, 'The Art of John Martin', Oxford 1975, pp.188–204, reproduced p.191 Terry Riggs November 1997