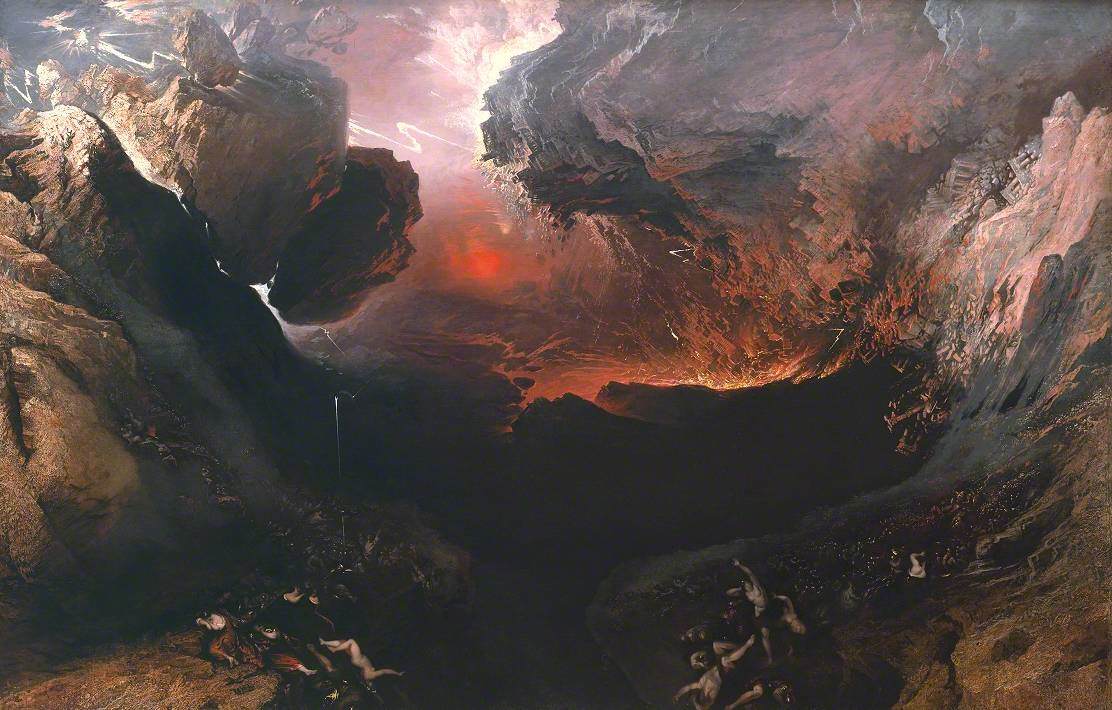 This is the third picture in Martin's great triptych, known as the 'Judgement Series'. Along with the other two vast panels, 'The Last Judgement' and 'The Plains of Heaven' (Tate T01927 and T01928), it was inspired by Saint John the Divine's fantastic account of the Last Judgement given in Revelation, the last book of the New Testament. Martin's aim in producing this series was highly Romantic: to express the sublime, apocalyptic force of nature and the helplessness of man to combat God's will.

Read more
Of all Martin's biblical scenes, this presents his most cataclysmic vision of destruction, featuring an entire city being torn up and thrown into the abyss. The Book of Judgement is sealed with seven seals. As each seal is broken, mysterious and terrifying events occur, culminating in the breaking of the sixth seal: 'and, lo, there was a great earthquake and the sun became black as sackcloth of hair, and the moon became as blood; | And the stars of heaven fell unto the earth, even as a fig tree casteth her untimely figs, when she is shaken of a mighty wind. | And the heaven departed as a scroll when it is rolled together; and every mountain and island were moved out of their places. (Revelation 6:12–14) Martin follows the biblical description closely, but adds his own sensational effects. A blood-red glow casts an eerie light over the scene. The mountains are transformed into rolling waves of solid rock, crushing any buildings that lie in their wake. Lightning splits the giant boulders which crash towards the dark abyss, and groups of helpless figures tumble inexorably towards oblivion. The three pictures in the triptych became famous in the years after Martin's death and were toured throughout England and America. They were described as 'The most sublime and extraordinary pictures in the world valued at 8,000 guineas' (quoted in Wilson, p.76). Many mezzotints of the pictures were sold, but the vastness and theatricality of Martin's visions now appeared outmoded to the mid-Victorians, and the paintings themselves failed to find a buyer. By the twentieth century, Martin's work had fallen into obscurity and he became known as 'Mad Martin'. In 1935 the triptych was sold for seven pounds and the separate panels dispersed. It was reunited by the Tate in 1974. Further reading: Simon Wilson, 'Tate Gallery – An Illustrated Companion', London 1990, p.76. Christopher Wood, 'Victorian Painting', London 1999, pp.19–20, reproduced p.20, in colour. Frances Fowle December 2000