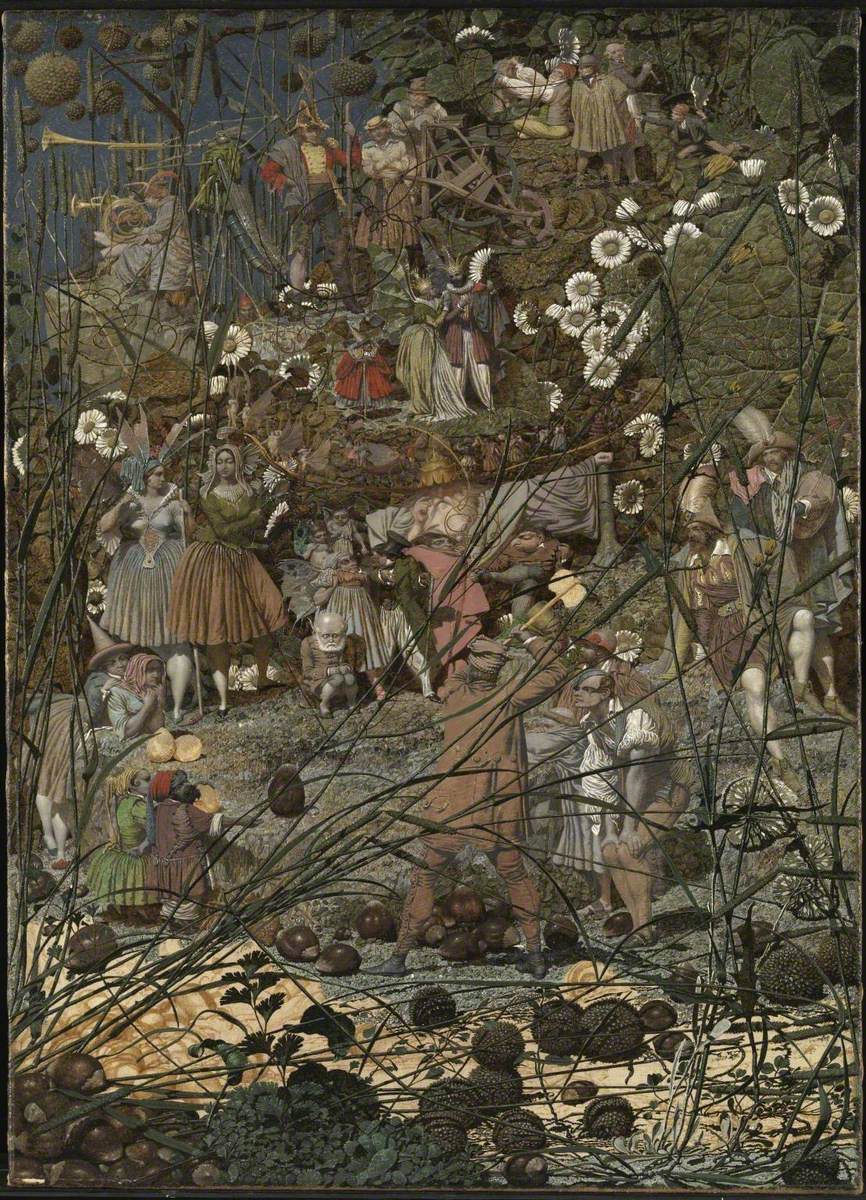 This work, although unfinished, is generally considered to be Dadd's masterpiece. It was painted for H. G. Haydon, an official at Bethlem Hospital, where Dadd was sent after he became insane and murdered his father in 1843. He was transferred to Broadmoor in July 1864, before being able to complete the painting, but he later wrote a long and rambling poem entitled 'Elimination of a Picture & its subject - called The Feller's Master Stroke', which attempts to explain some of the imagery.

Read more
With the exception of Shakespeare's Oberon and Titania, who appear in the top half of the picture, the figures are drawn entirely from the artist's imagination. The main focus of the painting is the Fairy Feller himself, who raises his axe in readiness to split a large chestnut which will be used to construct Queen Mabs' new fairy carriage. In the centre of the picture the white-bearded patriarch raises his right hand, commanding the woodsman not to strike a blow until the signal is given. Meanwhile the rest of the fairy band looks on in anticipation, anxious to see whether the woodsman will succeed in splitting the nut with one stroke. The magician-like figure of the patriarch wears a triple crown, which seems to be a reference to the Pope. Dadd saw the Pope during a visit to Rome in 1843 and was apparently overcome by an urge to attack him. Although the patriarch may be interpreted as a father figure, the tiny apothecary, brandishing a mortar and pestle in the top right of the picture, is in fact a portrait of the artist's father, Robert Dadd. This group of figures was intended to represent the childhood fortune-telling game 'soldier, sailor, tinker, tailor, ploughboy, apothecary, thief'. Unusually for Dadd, a note of prurience is introduced into the picture to the left of the patriarch, where two distorted but voluptuous fairy women are ogled by a satyr. Otherwise, the figures range from tiny gnats and centaurs, driving Queen Mabs in her old carriage, to a large dragonfly playing a trumpet. The picture is executed on a minute scale and in exquisite detail, and Dadd worked on it for a period of between six and nine years. His technique was to make a detailed sketch of the composition and then paint each object and area in its entirety before proceeding to the next. He used fairly thick paint, applied in tiny blobs that give a cobbled appearance to some of the surface. The strange disruptions of scale and lack of perspective enhance the fantastic feel of the picture, and the onlooker is further distanced from the scene by a screen of tendrils and grasses. A later, more finished, watercolour version of the picture is in the Fitzwilliam Museum in Cambridge. Further reading: Patricia Allderidge, 'The Late Richard Dadd 1817–1886, London 1974, pp.125–126, reproduced in colour p.131. David Greysmith, 'Richard Dadd – The Rock and Castle of Seclusion', London 1973, pp.121–125, reproduced in colour pl. 90. Jeremy Maas, Pamela White Trimpe, Charlotte Gere and others, 'Victorian Fairy Painting', London 1997, pp.102–103, reproduced p.103, in colour. Frances Fowle November 2000

Presented by Siegfried Sassoon in memory of his friend and fellow officer Julian Dadd, a great-nephew of the artist, and of his two brothers who gave their lives in the First World War 1963