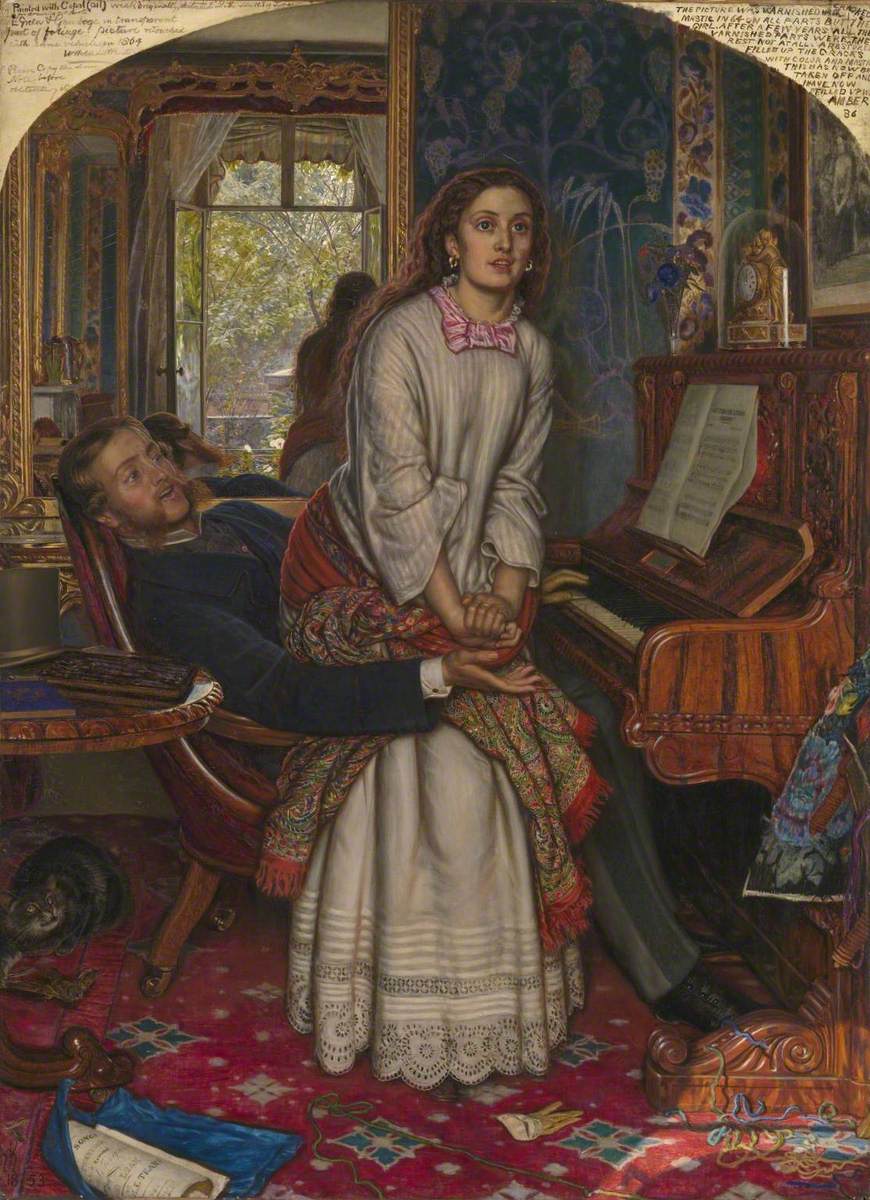 'The Awakening Conscience' was conceived as the material counterpart to Hunt's 'The Light of the World' (1851–1853, Warden and Fellows of Keble College, Oxford). Its inspiration was a verse from Proverbs: 'As he that taketh away a garment in cold weather, so is he that singeth songs to an heavy heart'. With his typical thoroughness, Hunt hired a room at Woodbine Villa, 7, Alpha Place, St John's Wood, a 'maison de convenance', to use as the setting.

Read more
A gentleman has installed his mistress (known to be such because of her absence of a wedding ring) in a house for their meetings. As they play and sing to Thomas Moore's 'Oft in the Stilly Night', she has a sudden spiritual revelation. Rising from her lover's lap, she gazes into the sunlit garden beyond, which is reflected in the mirror behind her. The mirror image represents the woman's lost innocence, but redemption, indicated by the ray of light in the foreground, is still possible. Intended to be 'read', the painting is full of such symbolic elements. The cat toying with the broken-winged bird under the table symbolises the woman's plight. A man's discarded glove warns that the likely fate of a cast-off mistress was prostitution. A tangled skein of yarn on the floor symbolises the web in which the girl is entrapped. Indeed, as Ruskin wrote to The Times on 25 May 1854, 'the very hem of the poor girl's dress, at which the painter has laboured so closely, thread by thread, has story in it, if we think how soon its pure whiteness may be soiled with dust and rain, her outcast feet failing in the street'. The frame, designed by Hunt, also contains various symbolic emblems; the bells and marigolds stand for warning and sorrow, the star is a sign of spiritual revelation. The underlying spiritual message was generally ignored by most critics, who concentrated instead on the more sensational aspects of the composition. The model is Hunt's girlfriend Annie Miller, an uneducated barmaid whom he met in 1850 when she was 15. Further reading: Leslie Parris (ed.), 'The Pre-Raphaelites', exhibition catalogue, Tate Gallery, London 1984, reprinted 1994, pp.120–121, reproduced in colour Terry Riggs March 1998