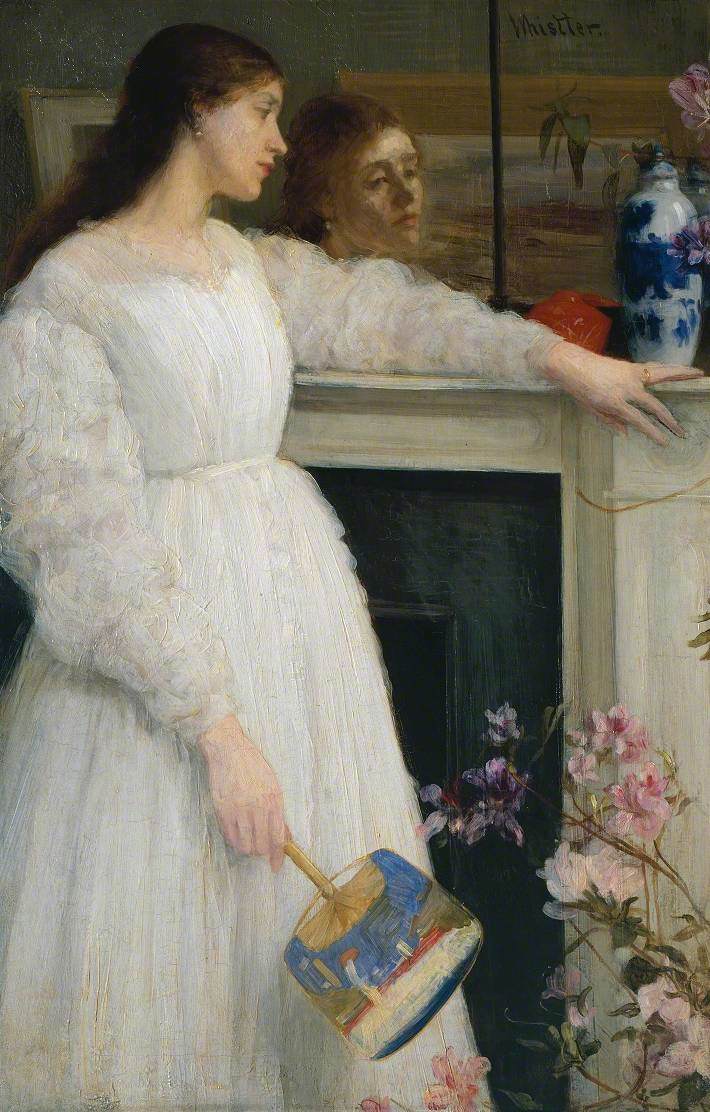 This picture was exhibited at the Royal Academy in 1865 as 'The Little White Girl'. It shows a young woman, dressed in white, leaning against a mantelpiece and gazing dreamily into a mirror. She is captured in a moment of deep contemplation. Her face is reflected in the mirror and silhouetted against a seascape, reinforcing the dream-like atmosphere. The reflected image is sad and careworn, and one is tempted to draw some kind of link with the wedding ring so prominently displayed on her left hand.

Read more
Whistler may also have intended to evoke Velázquez's 'Rokeby Venus' (National Gallery, London), where the reflection of the woman's face is similarly at odds with her own idealised image. The poet Swinburne was so inspired by Whistler's picture that he composed a verse ballad, 'Before the Mirror', in response. It was intended to complement, rather than explain the picture: 'Glad, but not flushed with gladness, Since joys go by; Sad, but not bent with sadness, Since sorrows die; Deep in the gleaming glass She sees all past things pass, And all sweet life that was lie down and lie'. (Algernon Swinburne, Poems and Ballads, London 1866). Whistler was delighted with the poem and had it printed on gold paper and pasted onto the frame. In this way he hoped to reinforce the picture's theme of reverie and regret. The model for the picture was Whistler's mistress, Jo Hiffernan, and the location the house that they shared in Lindsey Row, Chelsea. She is holding a Japanese fan of the type made for the European market. Whistler was fascinated by Japanese art and culture and collected Japanese objects from an early date. The fan, the red pot and blue and white vase on the mantelpiece, and the spray of pink azalea not only give the picture a Japanese feel, they provide brilliant colour notes against the neutral background of black, white and cream. Pictures hanging in the room are reflected in the mirror, their frames creating a series of right angles which are echoed by the fireplace and the mirror itself, dividing and compartmentalising the picture like a Japanese print. In 1887 Whistler exhibited 'Symphony in White No. 3' (Barber Institute of Fine Arts, University of Birmingham). 'The Little White Girl' was accordingly given the additional title of 'Symphony in White, No. 2', in order to underline the importance of reading the picture as an arrangement of colours, and interpreting the mood rather the subject of the painting. Correspondingly, the first picture in the series, 'The White Girl' (1862, National Gallery of Art, Washington) became known as 'Symphony in White, No. 1'. Further reading: Richard Dorment and Margaret F. MacDonald, 'James McNeill Whistler', exhibition catalogue, Tate Gallery, London 1994, pp.78–80, no.15, reproduced in colour p.79. Andrew Wilton and Robert Upstone (eds), 'The Age of Rossetti, Burne-Jones & Watts: Symbolism in Britain 1860–1910', exhibition catalogue, Tate Gallery, London 1997, pp.116–117, no.15, reproduced in colour p.116. Andrew McLaren Young, Margaret F. MacDonald, Robin Spencer with the assistance of Hamish Miles, 'The Paintings of James MacNeill Whistler', New Haven and London, 1980, no.52, reproduced in colour plate 31. Frances Fowle October 2000