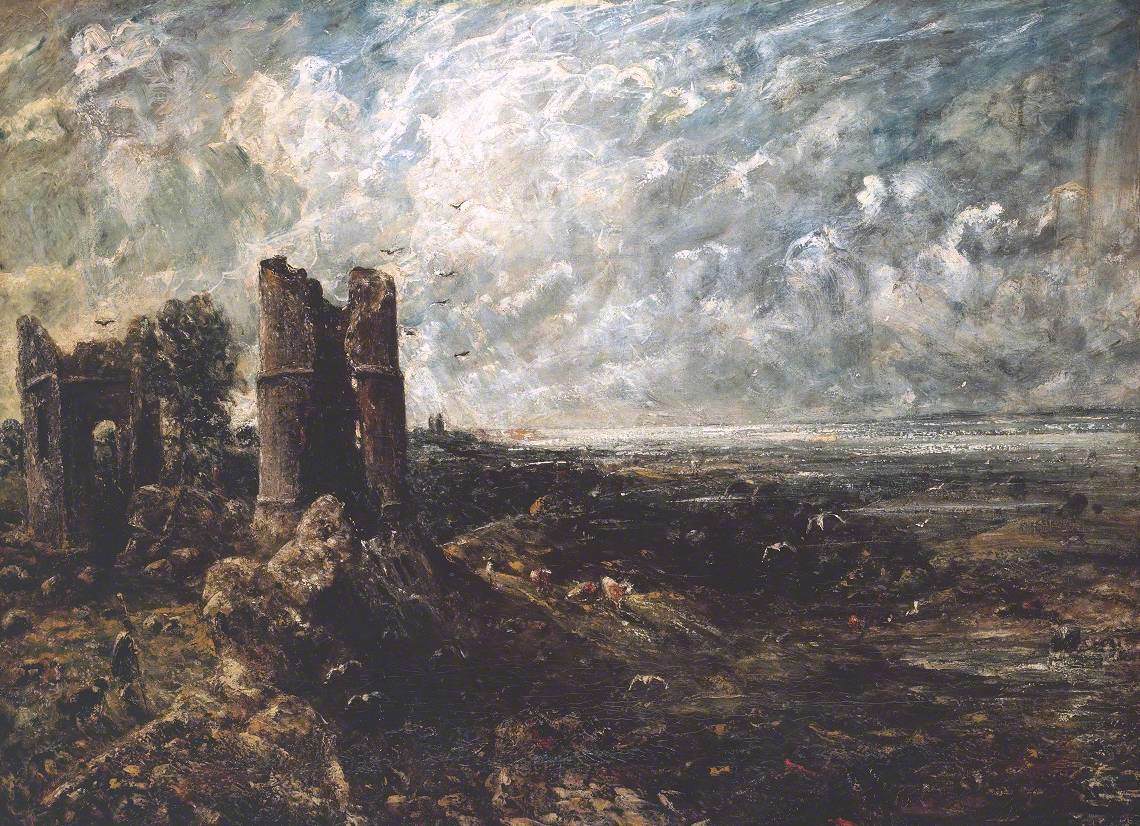 This is a full-size oil sketch for the painting now in the Paul Mellon Collection at the Yale Center for British Art. Constable submitted the finished work to the Royal Academy exhibition in 1829, the year in which he was elected an Academician. He began painting six-foot canvases in 1818, in emulation of the works of the past masters of landscape such as Claude, Poussin and Rubens. He saw these large pictures as a means to gain further recognition as an artist, and to elevate what many considered the mundane subject matter of rural scenery. Unable to paint from nature on this scale, he turned increasingly to invention, and these large studio sketches enabled him to work out the compositional problems he was encountering in the preparation of his exhibition pieces. The oil sketch would be made either prior to, or simultaneously with, the finished picture. Constable made a small pencil sketch of Hadleigh Castle near Southend in Essex in 1814, on his only visit to the area, when he wrote to his future wife Maria: 'At Hadleigh there is a ruin of a castle which from its situation is a really fine place – it commands a view of the Kent hills, the Nore and North Foreland & looking many miles to sea' (letter of 3 July 1814; in R. B. Beckett, ed., 'John Constable's Correspondence', II, Ipswich 1964, p.127).

Read more
He returned to the pencil sketch 15 years later, to develop the six-foot painting. He made a small preparatory oil sketch, probably in 1828 (Paul Mellon Collection, Upperville, Virginia), based on the drawing, but with the addition of a shepherd and his flock at the bottom left. In a pen and ink drawing made at around the same time (collection David Thomson), the composition has become decidedly more horizontal, having been extended on the right to include the distant Kent shore. A dog has replaced the shepherd's flock, and a tree has been added beside the castle's left-hand tower. The Tate's large oil sketch introduces cows in the middle-distance and gulls flying above the sea. Constable's wife Maria died in November 1828, and the sombre, desolate tone of the work is generally assumed to reflect his mood at this time. In a letter of 19 December of that year, he wrote to his brother Golding: 'I shall never feel again as I have felt, the face of the World is totally changed to me' (in C. R. Leslie, ed. Hon. Andrew Shirley, 'Memoirs of the Life of John Constable, R.A.', London 1937, p.234).