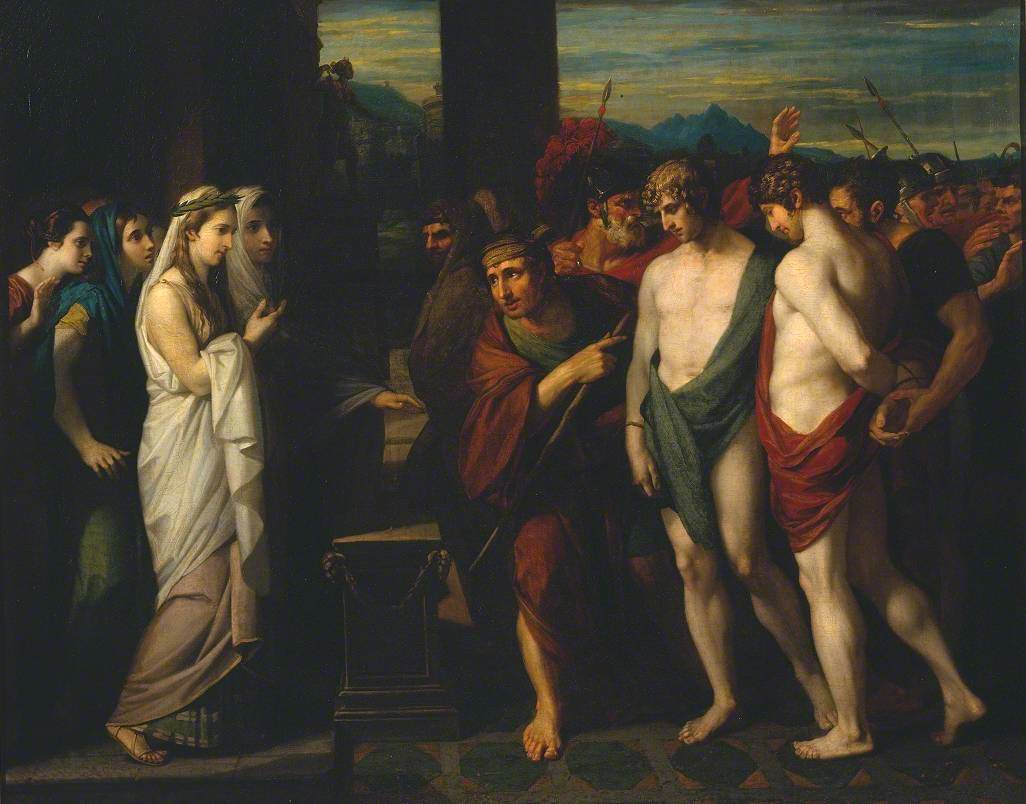 According to Sir George Beaumont (1753–1827), who presented the present picture to the National Gallery in 1826, the young American artist, Benjamin West, painted Pylades and Orestes 'immediately on his arrival in England', presumably in 1763, when he arrived from Italy (National Gallery, p.56). It was first shown at the annual exhibition of the Society of Artists, London, in 1766, with its companion 'The Continence of Scipio' (Cambridge, Fitzwilliam Museum). West's narrative is taken from the third act of a play by the classical author Euripides (480–406 BC) entitled 'Iphigenia in Taurus'. In the passage depicted by West, Iphigenia, a priestess of Diana, stands in judgement before the semi-naked figures of her brother Orestes (in the red drapery) and his cousin and companion, Pylades, who are brought before her, bound, by the shepherd (centre) who had previously reported their capture. Before Iphigenia, and separating her from the two men, is a low altar upon which the two men are to be sacrificed for their act of sacrilege. Beyond, at the entrance of the temple, is the gold statue of Diana that Orestes had been commanded by the oracle at Delphi to take back to Athens in reparation for the murder of his mother Clytemnestra, and which he had been attempting to seize when arrested.

Read more
In composing Pylades and Orestes West was heavily influenced by the neo-classical history paintings of Gavin Hamilton and Anton Raphael Mengs whom he had known during his studies in Italy between 1760 and 1763. He also looked for inspiration to the frescoes of Raphael and classical relief sculpture, notably the 'Orestes Sarcophagus' in the Villa Ridolfi, Rome, drawings from which he used to form the pose of his own figure of Orestes. West also revealed later that 'his mind was full of Correggio' when painting the present work, at least with respect to the colour of the figures' flesh' (quoted in von Erffa and Staley, p.261).

The early history of the picture is interesting. Apparently it was greatly admired in West's studio, even before it was exhibited, although of the many wealthy collectors who came to inspect it, none offered to buy it. However, in 1766, the year of its exhibition, Alexander Geddes (1737–1802) purchased the picture from West for 100 guineas, although by 1776 it belonged to the engraver and dealer Gerard Vandergucht (1696–1776), in whose posthumous sale it appeared the following year. By 1802 West had reacquired the picture, selling it once more, this time to the influential collector Sir George Beaumont. In 1826 Beaumont presented it to the National Gallery, making it the first picture by West to enter a public art gallery. It remained in the National Gallery until 1929, when it was transferred to the Tate Gallery.