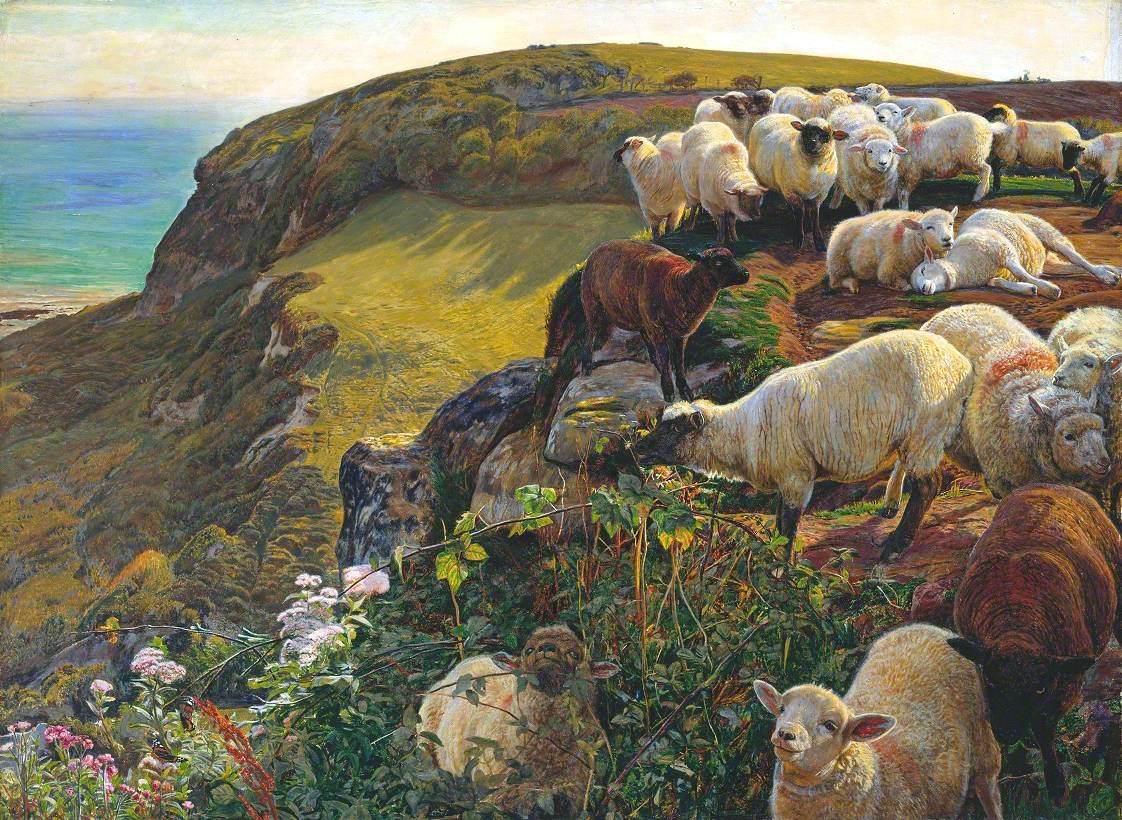 In 'Modern Painters' (1847) the writer and critic John Ruskin (1819–1900) exhorted young English artists to 'go to Nature in all singleness of heart, and walk with her laboriously and trustingly, having no other thoughts but how best to penetrate her meaning, and remember her instructions; rejecting nothing, selecting nothing, and scorning nothing; believing all things to be right and good, and rejoicing always in the truth.' Following Ruskin's dictum that art in its truthfulness can teach a moral lesson, William Holman Hunt created his greatest and most Pre-Raphaelite landscape. The picture was first commissioned as a replica of the sheep in the background of 'The Hireling Shepherd' (1851–1852, City of Manchester Art Galleries), which was bought by the eminent naturalist W. J. Broderip. The copy was destined for Broderip's cousin, Charles T. Maud, but Hunt apparently persuaded him that an original picture would be more desirable.

Read more
The location for the picture was the Lover's seat, a well-known beauty spot perched on the cliffs overlooking Covehurst Bay, near Hastings. Hunt has paid scrupulous attention to natural detail, but the cliffs, sheep and parts of the foreground were all painted from different viewpoints, and the butterflies in the left foreground were painted indoors from a live specimen. Hunt exhibited the picture at the Royal Academy in 1853 with the title 'Our English Coasts'. The critic F. G. Stephens, a former member of the Pre-Raphaelite Brotherhood, later suggested that the painting 'might be taken as a satire on the reported defenseless state of the country against foreign invasion' (William Holman Hunt and His Works, 1860, p.23). During this period fears of an invasion had been generated by the press, reacting to Napoleon III's autocratic régime in France. The original frame bore the inscription 'The Lost Sheep', and when Hunt sent the painting to the Exposition Universelle in Paris in 1855 he changed the title to 'Strayed Sheep', thus underlining the picture's religious symbolism. However, critics of the time were struck less by the picture's symbolism than by the treatment of light. Ruskin wrote in 1883 that 'It showed to us, for the first time in the history of art, the absolutely faithful balances of colour and shade by which actual sunshine might be transposed into a key in which the harmonies possible with material pigments should yet produce the same impressions upon the mind which were caused by the light itself' (quoted in Parris, p.108).

Presented by the Art Fund 1946