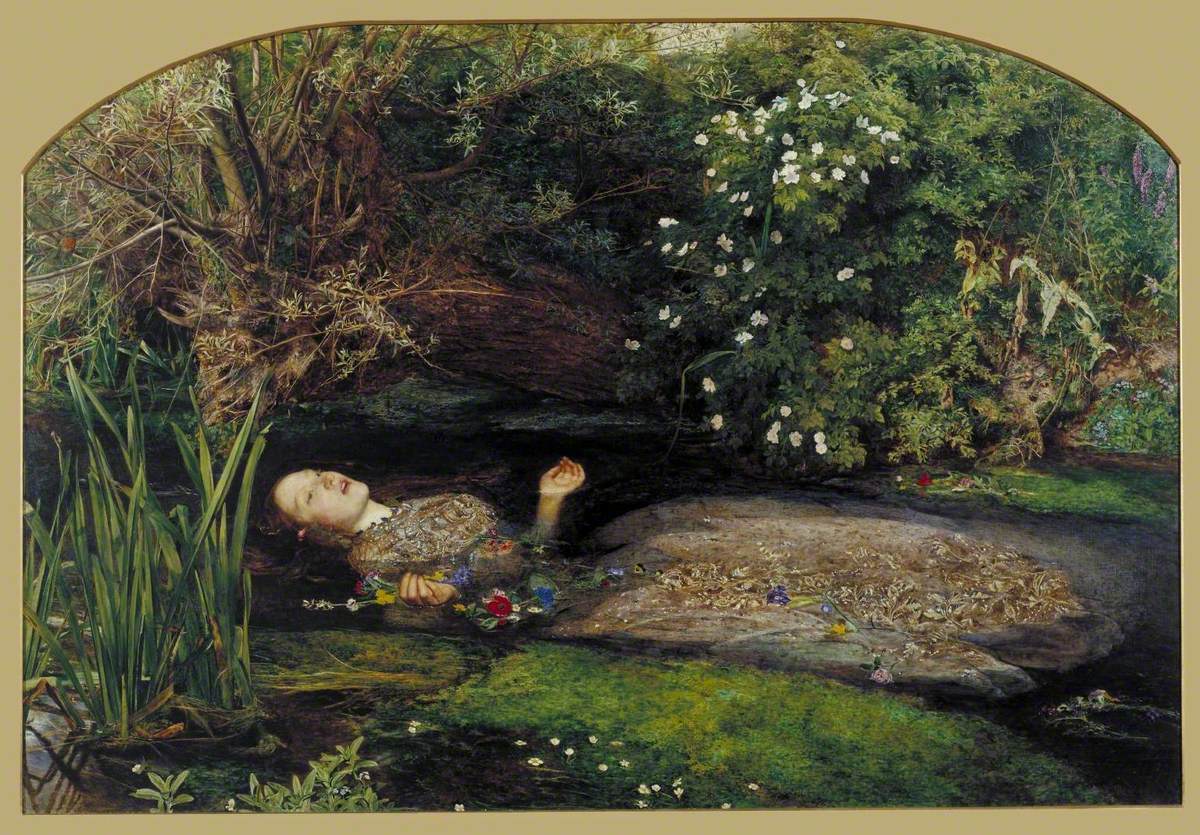 The scene depicted is from Shakespeare's Hamlet, Act IV, Scene vii, in which Ophelia, driven out of her mind when her father is murdered by her lover Hamlet, drowns herself in a stream: 'There, on the pendent boughs her coronet weeds Clambering to hang, an envious sliver broke; When down her weedy trophies and herself Fell in the weeping brook. Her clothes spread wide, And, mermaid-like, awhile they bore her up; Which time she chanted snatches of old tunes, As one incapable of her own distress, Or like a creature native and indued Unto that element; but long it could not be Till that her garments, heavy with their drink, Pull'd the poor wretch from her melodious lay To muddy death'. Shakespeare was a favourite source for Victorian painters, and the tragic-romantic figure of Ophelia from Hamlet was an especially popular subject, featuring regularly in Royal Academy exhibitions. Arthur Hughes exhibited his version of her death scene in the same year as this picture was shown (Manchester City Art Gallery).

Read more
Millais began the background in July 1851, at Ewell, Surrey. In accordance with the aims of the Pre-Raphaelite Brotherhood, he painted with close observation of nature. Millais quickly found, however, that such intense study was not without problems, and was moved to remark in a letter to Mrs Thomas Combe, 'My martyrdom is more trying than any I have hitherto experienced. The flies of Surrey are more muscular, and have a still greater propensity for probing human flesh ... I am threatened with a notice to appear before a magistrate for trespassing in a field and destroying the hay ... am also in danger of being blown by the wind into the water, and becoming intimate with the feelings of Ophelia when that Lady sank to muddy death, together with the (less likely) total disappearance, through the voracity of the flies ... Certainly the painting of a picture under such circumstances would be a greater punishment to a murderer than hanging. ('J. G. Millais I', pp.119–120) The figure of Ophelia was added afterwards. The model, Elizabeth Siddal, a favourite of the Pre-Raphaelites who later married Rossetti, was required to pose over a four month period in a bath full of water kept warm by lamps underneath. The lamps went out on one occasion, causing her to catch a severe cold. Her father threatened the artist with legal action until he agreed to pay the doctor's bills.

The plants, most of which have symbolic significance, were depicted with painstaking botanical detail. The roses near Ophelia's cheek and dress, and the field rose on the bank, may allude to her brother Laertes calling her 'rose of May'. The willow, nettle and daisy are associated with forsaken love, pain, and innocence. Pansies refer to love in vain. Violets, which Ophelia wears in a chain around her neck, stand for faithfulness, chastity or death of the young, any of which meanings could apply here. The poppy signifies death. Forget-me-nots float in the water. Millais wrote to Thomas Combe in March 1852: 'Today I have purchased a really splendid lady's ancient dress – all flowered over in silver embroidery – and I am going to paint it for "Ophelia". You may imagine it is something rather good when I tell you it cost me, old and dirty as it is, four pounds' ('J. G. Millais I', p.162). Ophelia was part of the original Henry Tate gift to the Tate Gallery.