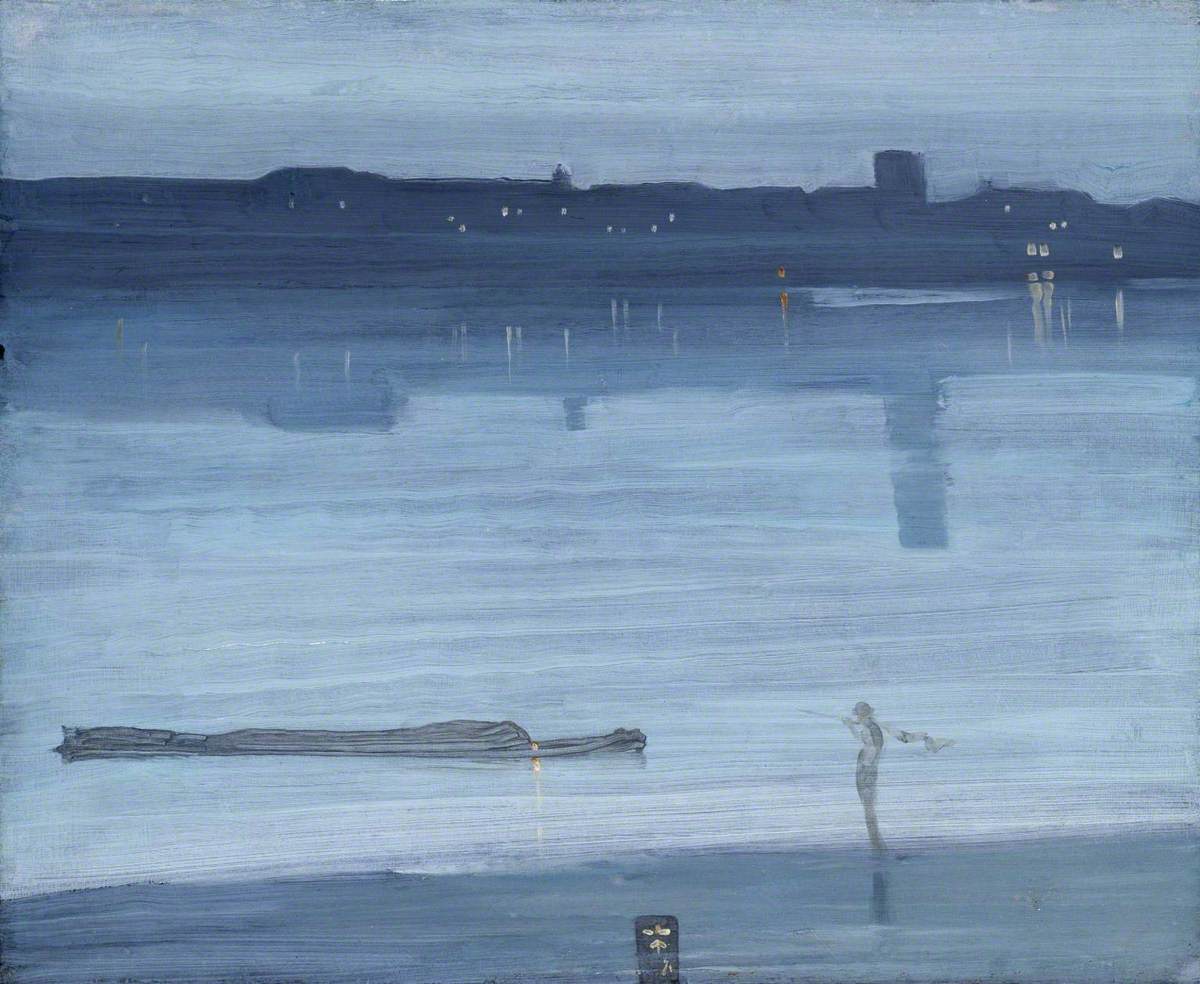 Painted in August 1871, this is the first of Whistler's Nocturnes. In these works Whistler aimed to convey a sense of the beauty and tranquility of the Thames by night. It was Frederick Leyland who first used the name 'nocturne' to describe Whistler's moonlit scenes. It aptly suggests the notion of a night scene, but with musical associations. The expression was quickly adopted by Whistler, who later explained, 'By using the word ''nocturne'' I wished to indicate an artistic interest alone, divesting the picture of any outside anecdotal interest which might have been otherwise attached to it.

Read more
A nocturne is an arrangement of line, form and colour first' (quoted in Dorment and MacDonald, p.122). Returning from a trip by steamer to Westminster, Whistler was inspired, one evening in August 1871, by a view of the river 'in a glow of rare transparency an hour before sunset' (Anna Whistler, the artist's mother, in a letter to Julia and Kate Palmer, 3 Nov. 1871, quoted in Dorment and MacDonald, p.122). He immediately rushed to his studio and painted a sunset ('Variations in Violet and Green', private collection) and this moonlit scene at one sitting. The picture is painted on panel, primed with dark grey paint, over which Whistler applied thin layers of pigment in order to create a contrasting sense of luminosity. The view is from Battersea looking across to Chelsea, and it is possible to make out features on the horizon, such as the tower of Chelsea Old Church on the right. In the foreground, a low barge and the figure of a fisherman are indicated with the minimum of detail, and the influence of Japanese art is evident in the restricted palette, the economy of line and the characteristic butterfly signature. This picture was exhibited, along with its pair, at the Dudley Gallery in November 1871. The critic for The Times revealed a rare appreciation of Whistler's Nocturnes, describing them as follows: 'They are illustrations of the theory … that painting is so closely akin to music that the colours of the one may and should be used, like the ordered sounds of the other; that painting should not aim at expressing dramatic emotions, depicting incidents of history or recording facts of nature, but should be content with moulding our moods and stirring our imaginations, by subtle combinations of colour, through which all that painting has to say to us can be said, and beyond which painting has no valuable or true speech whatever' ('The Times', 14 November 1871). Further reading: Richard Dorment and Margaret F. MacDonald, 'James McNeill Whistler', exhibition catalogue, Tate Gallery, London 1994, pp.122–123, no.46, reproduced in colour p.123. Andrew Wilton and Robert Upstone (eds), 'The Age of Rossetti, Burne-Jones & Watts: Symbolism in Britain 1860–1910', exhibition catalogue, Tate Gallery, London 1997, pp.206–207 no.79, reproduced in colour p.207. Andrew McLaren Young, Margaret F. MacDonald, Robin Spencer with the assistance of Hamish Miles, 'The Paintings of James MacNeill Whistler', New Haven and London, 1980, no. 103, reproduced in colour plate 106. Frances Fowle December 2000