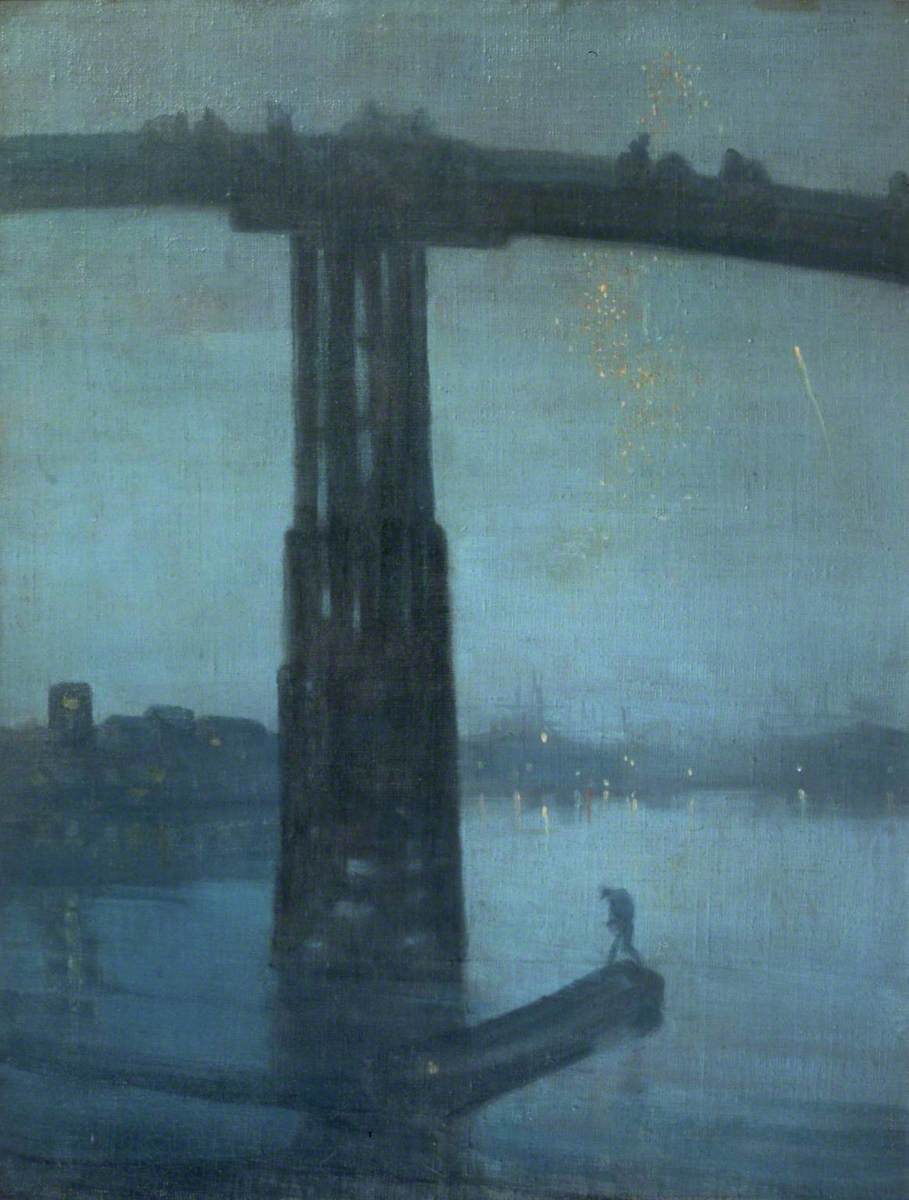 This is one of Whistler's most controversial works and was produced as 'evidence' in the famous Whistler-Ruskin trial of 1878. It is the fifth in a series of Nocturnes, produced during the 1870s. Whistler's aim in these works was to convey a sense of the beauty and tranquility of the Thames by night. It was Frederick Leyland who first used the name 'nocturne' to describe these moonlit scenes, suggesting the concept of evening, or night, but with musical associations. The expression was quickly adopted by Whistler, who later explained, 'By using the word ''nocturne'' I wished to indicate an artistic interest alone, divesting the picture of any outside anecdotal interest which might have been otherwise attached to it. A nocturne is an arrangement of line, form and colour first' (quoted in Dorment and MacDonald, p.122).

Read more
The central motif is Battersea Bridge, with Chelsea Church and the lights of the newly-built Albert Bridge visible in the distance. There are fireworks in the sky and one rocket ascends as another falls in sparks. Possibly inspired by Hiroshige's woodcut 'Moonlight at Ryogoko' of 1857, which includes a similar tall structure, Whistler intentionally exaggerated the height of the bridge. As the artist himself stated at the Ruskin trial, 'I did not intend to paint a portrait of the bridge, but only a painting of a moonlight scene … My whole scheme was only to bring about a certain harmony of colour' (quoted in Dorment and MacDonald, p.131). Whistler preferred the calm of the river at night to the noise and bustle of the Thames by day. With the Greaves brothers as his oarsmen, he would set off at twilight and sometimes remain on the river all night, sketching and memorising the scene. He never painted his Nocturnes on the spot, but rather from memory in his studio, employing a special medium devised for painting swiftly in oils. He thinned his paint with copal, turpentine and linseed oil, creating what he called a 'sauce', which he applied in thin, transparent layers, wiping it away until he was satisfied.

In 1876 Whistler exhibited the picture as 'Nocturne in Blue and Silver No. 5', but by 1892 had given it its present title. When it appeared at the first Grosvenor Gallery exhibition in 1877 Oscar Wilde wrote that it was 'worth looking at for about as long as one looks at a real rocket, that is, for somewhat less than a quarter of a minute' (quoted in Dorment and MacDonald 1994, p.130). The painting was bought by William Graham and was later included in the Graham sale at Christie's in 1886. When it came up for auction it was hissed by the general public.

Presented by the Art Fund 1905