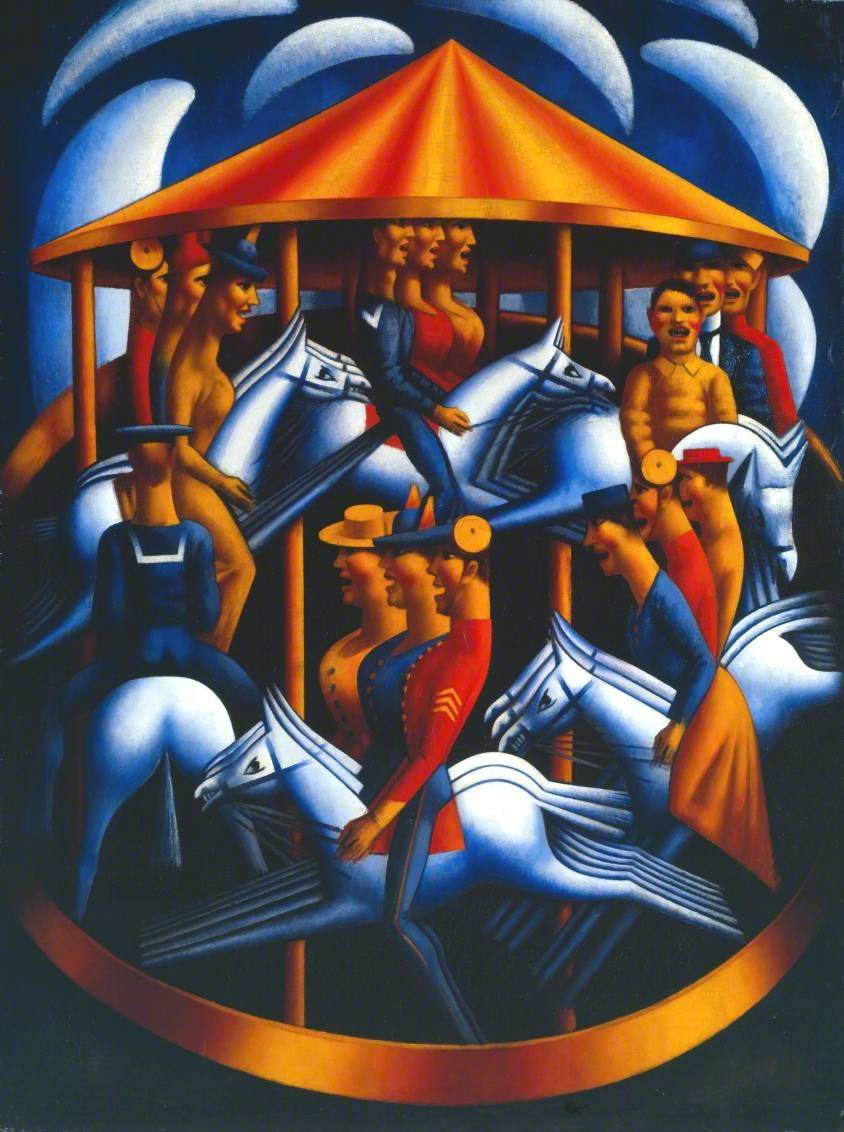 Gertler lived near Hampstead Heath from the winter of 1914–1915. The roundabout at the annual fair may have provided an inspiration for this picture. His painting from the spring of 1915 titled 'Swing Boats' (now lost, reproduced Woodeson, pl.28) is probably also of this fair. A letter from the writer D. H. Lawrence to Zoe Akins of 15 September 1915 describes a special fair then on the Heath (Zytaruk and Boulton, eds., 'The Letters of D. H. Lawrence', II, Cambridge 1981, p.396): 'There is a fair on behalf of the wounded soldiers today, and myriads of the wounded, in their bright blue uniforms and red scarves, and bands, and swing boats, and a whole rowdy enjoyment. It is queer.' Both the colours, and his remarking the odd contrast between wounded soldiers and public enjoyment, connect this comment with his friend Gertler's painting.

Read more
Gertler was a close friend of the young Richard Carline at this time and presumably knew his studies of roundabouts made in early 1915. As far as is known, no paintings of the subject by Richard Carline survive, but his elder brother Sydney's 1915 'Bank Holiday on Hampstead Heath' is in the Tate Gallery (Tate Gallery T01997). This painting is not of the fairground but it also has stylised figures and design. In several paintings and drawings preceding 'Merry-Go-Round' Gertler had hardened the figures into geometrical shapes, at times giving them the appearance of dolls (see, for instance, 'Family Group', 1913, Southampton City Art Gallery; 'Rabbi and Rabbitzin', 1914, private collection).

The Tate's painting was begun by May 1916 when Gertler wrote to Lytton Strachey, 'I am working very hard on a large and very unsaleable picture of "Merry-Go-Round"' (Carrington, p.111). Gertler's biographer John Woodeson states that it was finished by the following autumn. Several of the figures in the painting wear uniform but, although it is understood today as an expression of horror at the war, this is surprisingly not made explicit in either private or public comments of the time. Lawrence was deeply affected by the painting but, although recognising Gertler's anguish, related it to the artist's Jewish roots rather than to the war. In a letter to Gertler of 9 October 1916, Lawrence writes: 'Your terrible and dreadful picture has just come. This is the first picture you have ever painted: it is the best modern picture I have seen ... I believe there was something in Pompeian art, of this terrible and soul-tearing obscenity ... I could sit down and howl beneath it like Kot's dog, in soul-lacerating despair. I realise how superficial your human relationships must be, what a violent maelstrom of destruction and horror your inner soul must be ... it would take a Jew to paint this picture. It would need your national history to get you here, without disintegrating you first ... You are twenty-five, and have painted this picture – I tell you, it takes three thousand years to get where this picture is – and we Christians haven't got two thousand years behind us yet. (Zytaruk and Boulton, eds., II, 1981, pp.660-1)

Gertler had written to his patron Edward Marsh in the preceding summer: 'I am I believe what you call a "passivist". I don't know exactly what that means, but I just hate the war' (in C. Hassall, Edward Marsh, London 1959, p.370). It is difficult now not to regard the 'Merry-Go-Round' as an expression of this hatred but the numerous reviews of the 1917 London Group exhibition – by which time the news of the war was even worse – make no reference to this idea. It was regarded as the most striking painting in the exhibition but even the favourable descriptions did not take it to be a serious work. The painting was regarded in the first place as a provocative example of modernity in art and secondly as a decoration, intending no more than a description of a fun fair. The Sunday Times (29 April 1917) called it 'the apotheosis of the steam organ in paint, and a style of decoration admirably fitted for the adornment of a popular restaurant'.