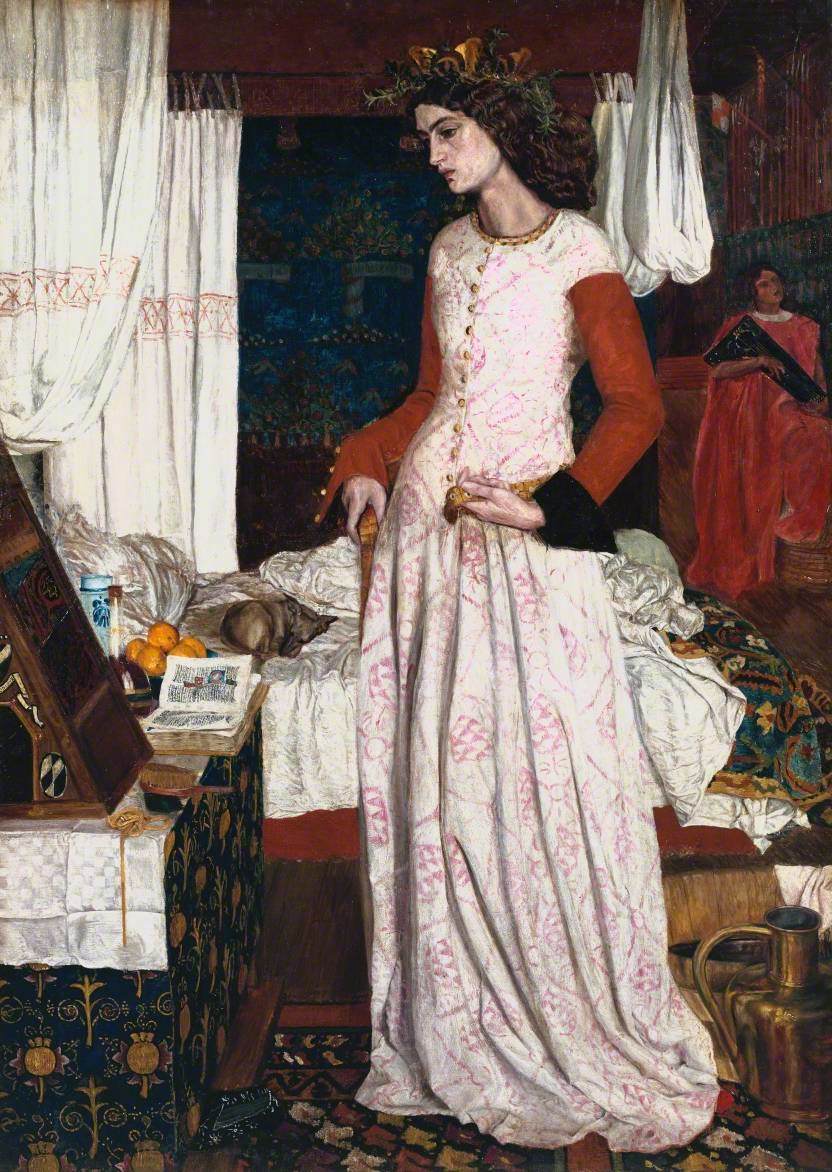 This is the only completed easel painting that William Morris produced. It is a portrait in medieval dress of Jane Burden, whom Morris married in April 1859. The picture has been identified in the past as Queen Guenevere, partly owing to the fact that Morris published his first volume of poetry, 'The Defence of Guenevere', in March 1858. However, recent research has established convincingly that the picture is intended to represent Iseult mourning Tristram's exile from the court of King Mark. Iseult appears to have recently arisen from her bed, where a small greyhound lies curled up among the crumpled sheets. In 'Le Morte d'Arthur' (c.1470), the author, Sir Thomas Malory (c.1405–1471), reminds us that 'the queen had always a little brachet [bitch-hound] with her that Sir Tristram gave her the first time that ever she came into Cornwall, and never would that brachet depart from her but if Sir Tristram was nigh' (quoted in Banham and Harris, p.115). She stands wistfully in her small chamber, her feelings for Tristram reinforced by the sprigs of rosemary, symbolising remembrance, in her crown, and the word 'DOLOURS' (grief) written down the side of her mirror.

Read more
The rich colours, the emphasis on pattern and details such as the illuminated missal reveal where Morris's true talents lay. He was less at home with figure painting than with illumination, embroidery and woodcarving, and he struggled for months on this picture. He worked for much of the time at 17, Red Lion Square, the rooms he shared with Edward Burne-Jones. Many of the furnishings such as the Turkish rug, Persian embroidered cover and whitework hangings on the bed were probably in Morris's personal collection. The background panel is close in style to the heavy tapestries designed by Morris for Red Lion Square and the table cover is of the type taken as a model by Morris and Webb for the firm's church furnishings.

In 1874 the picture was claimed as his own by Ford Madox Brown's son Oliver. Rossetti, who had a great fondness for Jane Burden, offered him £20 for it as 'an early portrait of its original, of whom I have made so many studies myself' (quoted in Parry, p.103). The picture eventually passed to Rossetti's brother, William Michael. It lay forgotten in a cupboard until Rossetti's death, when it was returned to Jane Burden.

Bequeathed by Miss May Morris 1939