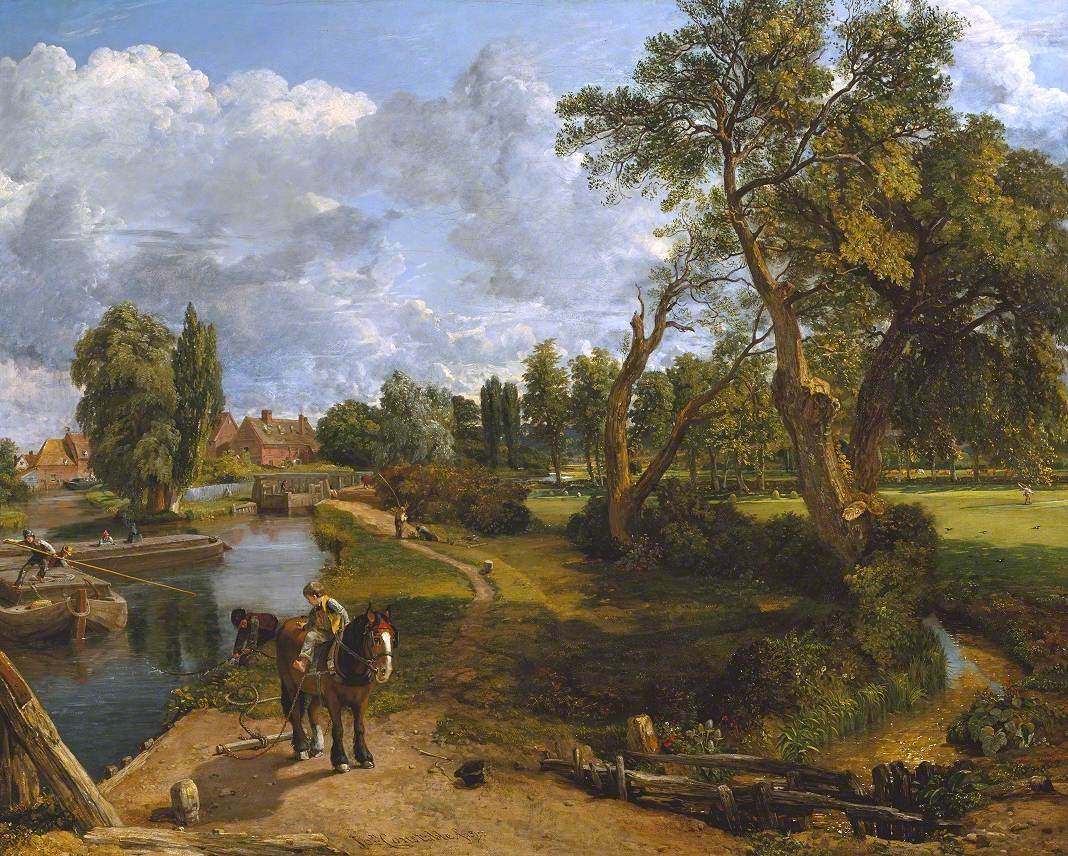 Constable began this picture, his largest exhibition canvas to be painted mainly outdoors, a few months before his marriage to Maria Bicknell (see Tate Gallery T03900). He wrote to Maria from Bergholt on 12 September 1816: 'I am now in the midst of a large picture here which I had contemplated for the next exhibition – it would have made my mind easy had it been forwarder –  I cannot help it – we must not expect to have all our wishes complete' (in R. B. Beckett, ed., 'John Constable's Correspondence', II, Ipswich 1964, p.203).

Read more
Prior to 1814, the artist produced his exhibition pictures in the studio, working from oil sketches and drawings, but in that year he declared his intention to make finished paintings from nature. The summers of 1816 and 1817 were the last occasions upon which Constable spent any length of time at East Bergholt, and the last in which the artist painted directly from the scenery of his Suffolk childhood. Constable frequently depicted the scenes of his 'careless boyhood' which, he wrote to his friend Archdeacon Fisher, he associated with 'all that lies on the banks of the Stour. They made me a painter (& I am gratefull)' (letter of 23 October 1821; in Beckett, VI, 1968, p.78).

The Constable family business was at Flatford, about a mile from East Bergholt. The family had a watermill on the Stour for grinding corn, and a dry dock for building the barges to transport grain to Mistley for shipment to London, as well as a watermill upstream at Dedham. The passage up and down the river required the use of horse-drawn barges; the ropes had to be disconnected in order to allow the barges to be poled under Flatford bridge. In this picture, a boy is disconnecting a rope and another sits astride a tow-horse. Constable painted the inscription to appear as if it had been scratched in the earth with a stick. Although the painting was probably executed largely on the spot, various details were almost certainly added in the studio, such as the boy and the horse, the timberwork in the foreground and the mooring-post on the left. It is known from x-rays that the artist painted out a horse on the tow-path and substituted the figures of two boys. Constable evidently experienced difficulty painting outdoors on such a large canvas as this one, for after showing it at the Royal Academy in 1817, he repainted the tops of the trees and the entire sky, presumably in time for the picture's second showing at the British Institution in January 1818. Constable made several drawings and oil sketches of the subject from various angles, but the only certain preparatory studies for the picture are an oil sketch in the collection of David Thomson and two drawings, one in the Tate (Tate Gallery T05493). This is a pencil tracing of an image made with a brush on a sheet of glass held on an easel in front of the subject itself. The tracing was made by placing a piece of paper over the image on the glass, and was squared for transfer to the canvas. It contains the two barges but none of the figures seen in the painting.

Bequeathed by Miss Isabel Constable as the gift of Maria Louisa, Isabel and Lionel Bicknell Constable 1888