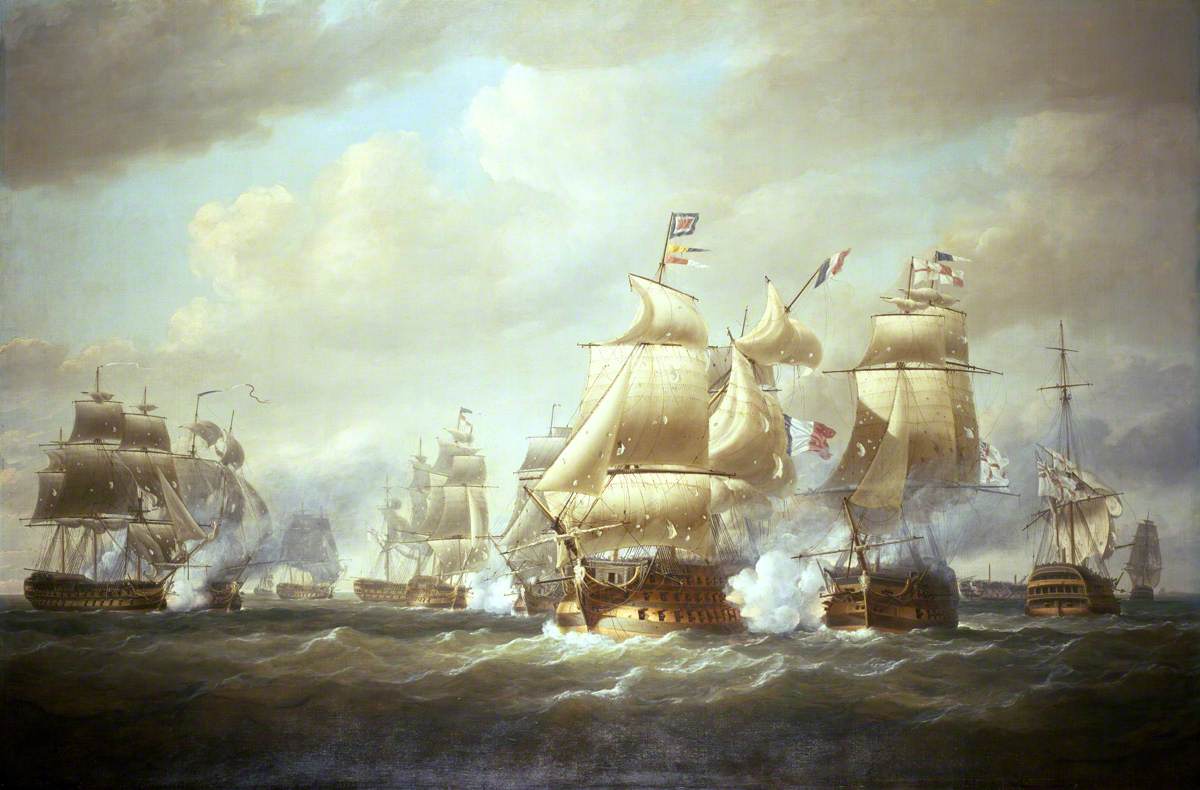 This image can be used for non-commercial research or private study purposes, and other UK exceptions to copyright permitted to users based in the United Kingdom under the Copyright, Designs and Patents Act 1988, as amended and revised. Any other type of use will need to be cleared with the rights holder(s).

The collection that owns the artwork may have more information on their own website about permitted uses and image licensing options.

Review our guidance pages which explain how you can reuse images, how to credit an image and how to find images in the public domain or with a Creative Commons licence available.

Following Nelson's victory at Trafalgar in 1805, Sir John Duckworth left the blockade of Cadiz and pursued a French squadron to the Caribbean, where he defeated it off San Domingo on the 6 February 1806. With six ships of the line and two frigates he was lying off St Kitts, watering and refitting his squadron, when he heard on that three French ships of the line were making for San Domingo. A force of nine French ships were found at anchor in San Domingo Roads, whence they slipped their cables and made sail in a westerly direction, forming a line of battle close inshore. The British closed in on them in two lines to cut them off.

Read more
The action began when 'Superb', 74 guns, under the command of Sir John Duckworth, fired at the French 'Alexandre', 80 guns. In the action that followed the French ships' Alexandre', Brave', 74 guns, and 'Jupiter', 74 guns, were taken while the 'Diomede', 72 guns, and the huge 'Imperial', 120 guns, ran themselves ashore and were wrecked. The three French frigates, 'Felicite', 36 guns, 'Comete', 36 guns, and 'Diligente', 18 guns, escaped. The 'Imperial', in port-bow view is in the right centre foreground of the painting, engaged to port with the 'Superb'. The 'Imperial's' main topmast is falling. To the right and beyond is the partly dismasted 'Northumberland', 74 guns, in starboard-quarter view. Beyond her in the extreme right background is the British 'Spencer', 74 guns, stern on, and in the background between the 'Superb 'and 'Northumberland' is the dismasted 'Brave.' In the centre middle ground, in port-bow view and partly masked by the 'Imperial’ is the 'Diomede', being engaged to starboard by the British 'Canopus', 80 guns, in starboard-bow view. Astern of her the stern half of the British 'Atlas', 74 guns, is visible, followed by the 'Agamemnon', 64 guns, in starboard-bow view, with the 'Alexandre' in starboard-quarter view in the distance. There is a fresh breeze and a choppy sea.