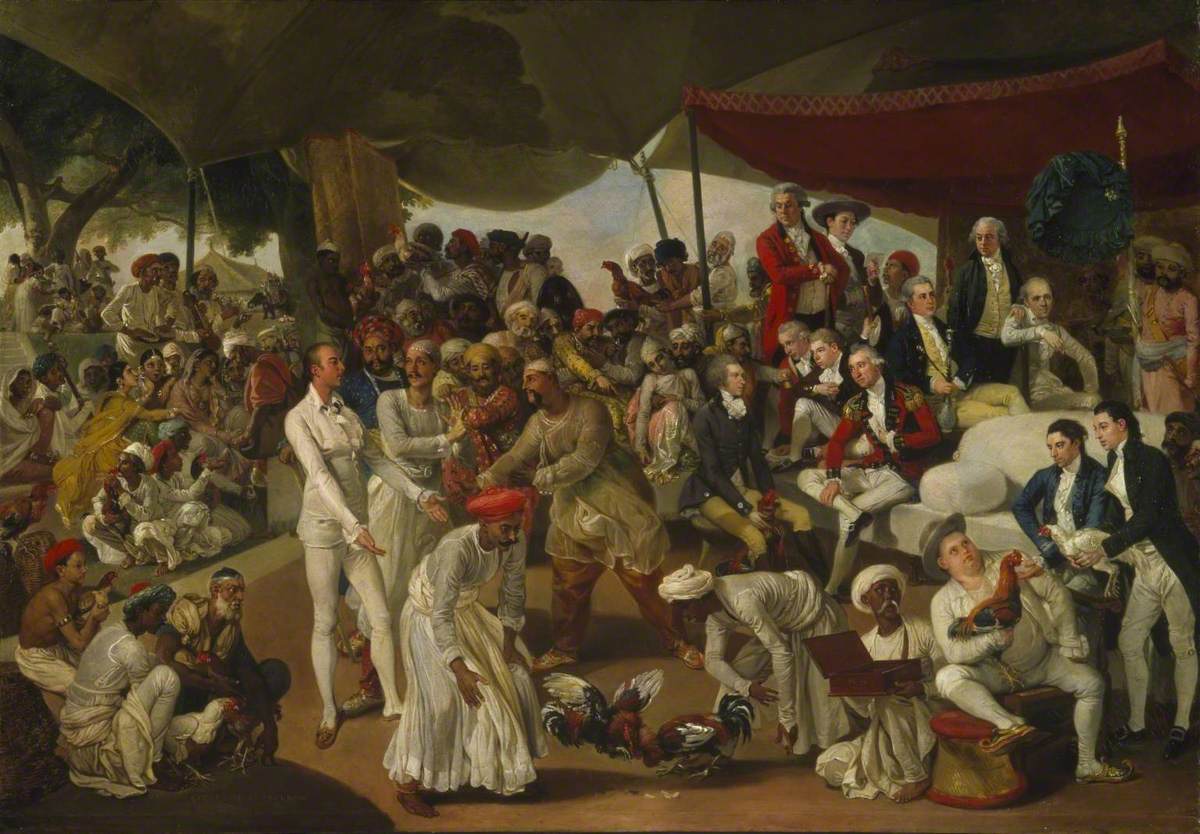 This work, one of the liveliest pictures Zoffany produced during his six years in India, is an important record of British colonial life in that country in the late eighteenth century. While India was a common destination for British landscape painters and minor portraitists seeking new and stimulating experiences, it was unusual for an important portrait painter such as Zoffany to make the arduous journey. However, after earning the displeasure of Queen Charlotte over his 'Tribuna' picture, he found himself out of favour and new commissions were not forthcoming. He landed in Calcutta in September 1783.

Read more
The painting depicts a cock match between Asaf-ud-daula, Nawab Wazir of Oudh (standing in the centre) and Colonel John Mordaunt (standing on the left in white), a keen cock-fighter who had brought out from England game-cocks which he was confident would defeat native-bred birds. The outcome of the match is unknown. Cock-fighting was widely regarded as a vicious, ungentlemanly sport. Captain Robert Smith wrote in the 1830s: 'This barbarous amusement is a particular favourite with the people of Lucknow and is as great a source of demoralisation here, as it is in every country where the custom prevails' (quoted in M. Archer, 'India and British Portraiture 1770–1825', London 1979, p.148).

The picture was commissioned in 1784 by Warren Hastings, the 1st Governor-General of Bengal, shortly before his return to England in 1785. He may have admired a simpler version Zoffany painted for Asaf. Hastings is not in the picture, although his diary records that he was present at Mordaunt's cock fight of 5 April 1784. Zoffany arrived in Lucknow to work for him on 3 June, and was paid 15,000 rupees (about £1,500). The painting was finished after Hastings's return to England and was despatched to him in February 1788. At one time, the picture was thought to have been lost at sea, and this a copy made by Zoffany, but this is now generally discounted. Asaf's court at Lucknow was the most extravagant of the native courts, attracting numerous European adventurers lured by the financial prospects and exotic lifestyle. Faiz Bakhsh wrote that Asaf's 'natural inclinations and attachments were for low, ill-born and base-minded associates ... He delighted in meaningless amusements and was immensely pleased with anyone who indulged in filthy language; and the more obscene the conversation was in any company, the better he was pleased' (quoted in Archer, p.143). The illiterate Mordaunt was a particular favourite. An illegitimate son of the Earl of Peterborough, he was commander of the Nawab's bodyguard and leader of court amusements, including the cock-fights. At Lucknow, Indians and Europeans enjoyed social equality and personal friendship. Many Europeans had Indian wives, or bibis, and children. The central figures of the Lucknow court are portrayed here: Colonel Antoine Polier (in a red coat, standing under the awning), a Swiss officer who was engineer to the Nawab and possessor of several bibis and a number of children; John Wombwell (seated to the right holding a hookah), the East India Company's paymaster at Lucknow; and below them (in uniform, seated on the dais) the French adventurer Claud Martin. The notorious Martin kept four wives and was, among other things, the only man ever known to have successfully performed a surgical operation on himself. Lord Valentia wrote in an account after Martin's death: 'a more infamous or despicable character ... never existed. He had not a single virtue, though he laboured to assume the appearance of several' (quoted in Philip Davies, 'Splendours of the Raj', London 1985, pp.93–94).

Standing beside Wombwell is the artist Ozias Humphrey with a hand on Zoffany's shoulder. Standing at the far right corner, wearing a blue coat and holding a white bird, is Robert Gregory, the assistant to the Governor-General's representative. Gregory was reportedly cut out of his father's will for cock-fighting. The rotund European in white, sitting in the right foreground with a fighting-cock, is Lieutenant Golding of the East India Company's Corps of Engineers. After its acquisition by the Tate the painting was cleaned, revealing new subtleties of colour, detail and meaning. The Nawab's state of sexual arousal, his agitated pose and inclination towards his chief minister and favourite bodyguard Hassan Resa Khan (in the ornate red turban), add an erotic dimension to the nature of the cock fight. The vignette just behind the Nawab shows a bearded Hindu (in turban) fondling a Moslem boy catamite (in the white cap worn by Moslem men), to the outrage of the man in the red turban who must be restrained by a courtier. Lewis Ferdinand Smith recounted that the Nawab 'has many adopted children, but none of his own' – despite a harem of 500 beauties – and that towards his wife of 16 years 'he has never fulfilled the duties of a husband' (quoted in Archer, p.144). This painting was perhaps Hastings's select joke, a memento of his time in India.

Purchased with the assistance of the National Heritage Memorial Fund, the Art Fund, the Friends of the Tate Gallery and a group of donors 1994