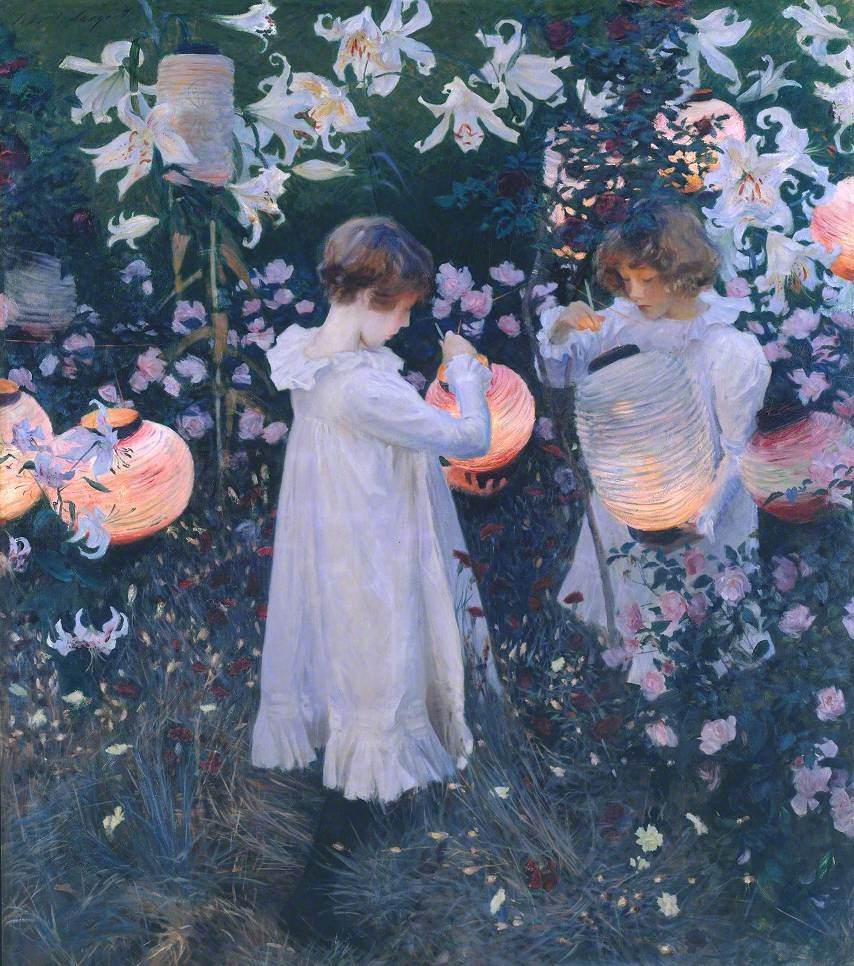 The inspiration for this picture came during a boating expedition Sargent took on the Thames at Pangbourne in September 1885, with the American artist Edwin Austin Abbey, during which he saw Chinese lanterns hanging among trees and lilies. He began the picture while staying at the home of the painter F. D. Millet at Broadway, Worcestershire, shortly after his move to Britain from Paris. At first he used the Millets's five-year-old daughter Katharine as his model, but she was soon replaced by Polly and Dorothy (Dolly) Barnard, the daughters of the illustrator Frederick Barnard, because they had the exact haircolour Sargent was seeking. Dolly, aged eleven, is on the left; Polly, aged seven, is on the right. A sketchbook at the Fogg Museum, Cambridge, includes Sargent's outline designs for the painting, and two drawings at the Tate (Tate Gallery A00850-1) record the precise poses he required for the girls' profiles.

Read more
He worked on the picture, one of the few figure compositions he ever made out of doors in the Impressionist manner, from September to early November 1885, and again at the Millets's new home, Russell House, Broadway, during the summer of 1886, completing it some time in October. Sargent was able to work for only a few minutes each evening when the light was exactly right. He would place his easel and paints beforehand, and pose his models in anticipation of the few moments when he could paint the mauvish light of dusk. As autumn came and the flowers died, he was forced to replace the blossoms with artificial flowers. His friend Edmund Gosse recorded Sargent's working method: 'Instantly, he took up his place at a distance from the canvas, and at a certain notation of the light ran forward over the lawn with the action of a wag-tail, planting at the same time, rapid dabs of paint on the picture, and then retiring again, only, with equal suddenness, to repeat the wag-tail action. All this occupied but two or three minutes, the light rapidly declining, and then, while he left the young ladies to remove his machinery, Sargent would join us again, so long as the twilight permitted, in a last turn at lawn tennis.' (quoted in Charteris, pp.74–75)

Edwin Howland Blashfield, a member of the artists' colony at Broadway that year, recalled that when he saw the canvas each morning, the previous evening's work seemed to have been scraped off, and that this happened repeatedly at each stage. Sargent cut two feet off the left side of the canvas, leaving it approximately square, in order to concentrate the composition. The picture was both acclaimed and decried at the 1887 Royal Academy exhibition. The title comes from the song 'The Wreath', by the eighteenth-century composer of operas Joseph Mazzinghi, which was popular in the 1880s. Sargent and his circle frequently sang around the piano at Broadway. The refrain of the song asks the question 'Have you seen my Flora pass this way?' to which the answer is 'Carnation, Lily, Lily, Rose'. The picture was bought for the Tate Gallery in 1887, under the terms of the Chantrey bequest, largely at the insistence of the Royal Academy President, Sir Frederic Leighton. A portrait by Sargent of Mrs Barnard (1885), made at the same time as 'Carnation, Lily, Lily, Rose', is also in the Tate (Tate Gallery N05901).

Presented by the Trustees of the Chantrey Bequest 1887