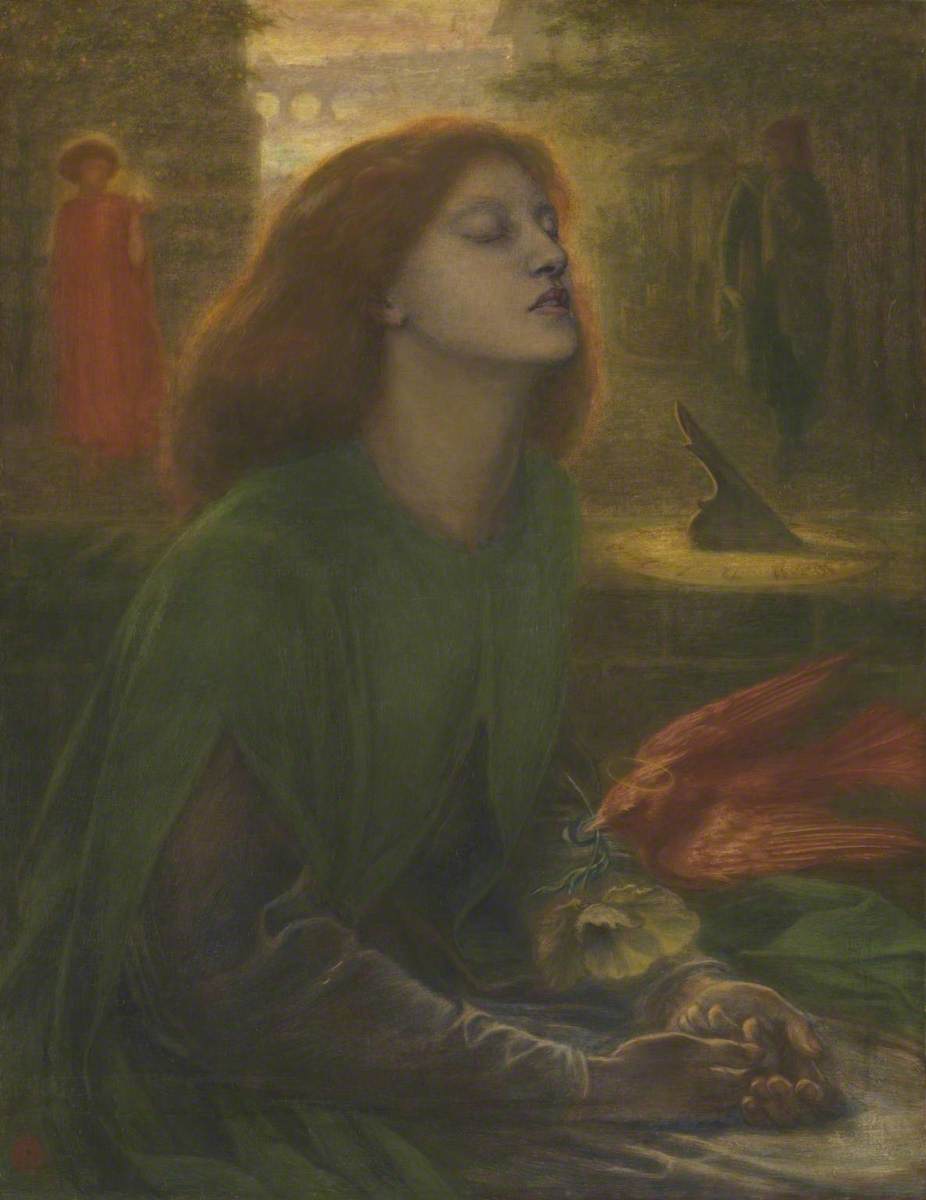 Rossetti draws a parallel in this picture between the Italian poet Dante's despair at the death of his beloved Beatrice and his own grief at the death of his wife Elizabeth Siddal, who died on 11 February 1862. Dante Alighieri (1265–1321) recounted the story of his unrequited love and subsequent mourning for Beatrice Portinari in the 'Vita Nuova'. This was Rossetti's first English translation and appeared in 1864 as part of his own publication, 'The Early Italian Poets'.

Read more
The picture is a portrait of Elizabeth Siddall in the character of Beatrice. It has a hazy, transcendental quality, giving the sensation of a dream or vision, and is filled with symbolic references. Rossetti intended to represent her, not at the moment of death, but transformed by a 'sudden spiritual transfiguration' (Rossetti, in a letter of 1873, quoted in Wilson, p.86). She is posed in an attitude of ecstasy, with her hands before her and her lips parted, as if she is about to receive Communion. According to Rossetti's friend F. G. Stephens, the grey and green of her dress signify 'the colours of hope and sorrow as well as of love and life' ('Beata Beatrix by Dante Gabriel Rossetti', Portfolio, vol.22, 1891, p.46).

In the background of the picture the shadowy figure of Dante looks across at Love, portrayed as an angel and holding in her palm the flickering flame of Beatrice's life. In the distance the Ponte Vecchio signifies the city of Florence, the setting for Dante's story. Beatrice's impending death is evoked by the dove – symbol of the holy spirit – which descends towards her, an opium poppy in its beak. This is also a reference to the death of Elizabeth Siddall, known affectionately by Rossetti as 'The Dove', and who took her own life with an overdose of laudanum. Both the dove and the figure of Love are red, the colour of passion, yet Rossetti envisaged the bird as a messenger, not of love, but of death. Beatrice's death, which occurred at nine o'clock on 9th June 1290, is foreseen in the sundial which casts its shadow over the number nine. The picture frame, which was designed by Rossetti, has further references to death and mourning, including the date of Beatrice's death and a phrase from Lamentations 1:1, quoted by Dante in the 'Vita Nuova': 'Quomodo sedet sola civitas' ('how doth the city sit solitary'), referring to the mourning of Beatrice's death throughout the city of Florence.