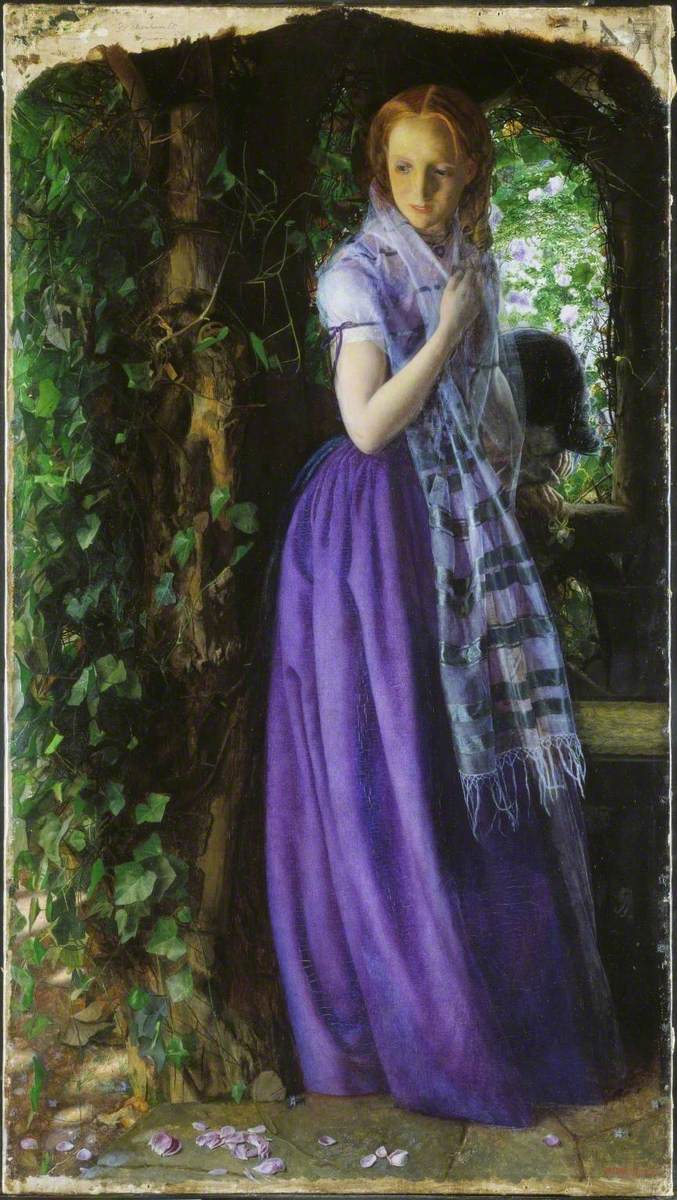 This is Hughes' best-known work, and one of the most popular of all Pre-Raphaelite paintings. When it was exhibited at the Royal Academy in 1856, the accompanying catalogue contained a quotation from one of the songs in Tennyson's 'The Miller's Daughter', in which the young lovers fear the passing of their love: 'Love is hurt with jar and fret, | Love is made a sweet regret; | Eyes with idle tears are wet, | Idle habits link us yet.

Read more
| What is love? for we forget: | Ah, no! no!' The painting was not conceived as an illustration to the poem, but rather the verse reinforced Hughes's depiction of fragile young love. Hughes changed the setting from a millstream with chestnut trees and forget-me-nots to an ivy-clad arbour or summerhouse with lilac outside the window and rose petals on the stone floor. As with many of the artist's works, ivy is also used to decorate the frame. The Pre-Raphaelites often included symbolic elements in their work. Ivy signifies everlasting life, roses love. That the petals are strewn on the floor may suggest the love affair has ended. 'April Love' was the first of a number of compositions in which Hughes depicted lovers in a landscape. It shows the influence of 'A Huguenot', 1852 (private collection) and 'Ferdinand Lured by Ariel', 1849 (private collection) by Millais, whom Hughes greatly admired. The rich blues, greens and purples employed by Hughes quickly became his trade mark. On 26 November 1855 Hughes married 'his early and only love' Tryphena Foord. Tryphena's father managed a decorating business owned by Robert Cutbush, whose brother Thomas Robert Cutbush probably owned the garden at Maidstone in which, according to Robert Ross, 'April Love' was painted (Burlington Magazine, vol.28, February 1916, p.171). Much of the painting, however, appears to have been done at 6, Upper Belgrave Place, London, where Hughes shared a studio with the sculptor Alexander Munro, said to have been the model for the man in the picture (letter from Margaret Munro, 20 August 1959, in Tate Gallery files). According to Hughes's pupil Albert Goodwin, writing in 1916, the face of the girl was originally modelled from a country girl, but she disliked the way Hughes was painting her and left. The final model was probably Tryphena. The painting was known by several titles prior to its exhibition as 'April Love'. Ford Madox Brown wrote in his diary on 9 September 1855: 'Last night I had the mulligrubs & went for the first time to Munnros & saw Hughes picture of the Lovers quarrel - it is very beautiful indeed. The girl is lovely, draperies & all, but the greens of his foliage were so acid that made my mulligrubs worse I do think' (V. Surtees, ed., 'The Diary of Ford Madox Brown', New Haven and London 1981, p.153). Hughes, writing to the poet William Allingham, recalled the latter's suggestion that it should be called 'Hide and Seek': 'You remember the picture of a girl you saw unfinished (and suggested my calling ''Hide and Seek'' ( now completed and rejoicing in the more graceful title of ''April Love.'' Ruskin saw, went into enthusiastic admiration, and brought his Father to try to induce him to purchase it, but alas fate willed otherwise' (H. Allingham and E. Baumer Williams, eds., Letters to William Allingham, London 1911, p.62). Ruskin continued to express enthusiasm for the picture, however, calling it in his Academy Notes for 1856 'Exquisite in every way; lovely in colour, most subtle in the quivering expression of the lips, and sweetness of the tender face, shaken, like a leaf by winds upon its dew, and hesitating back into peace (Cook & Wedderburn, eds., 'The Works of John Ruskin, XIV', London 1904, p.68). The picture was bought at the Royal Academy exhibition by the designer William Morris, who wrote to Edward Burne-Jones on 17 May asking him to 'do me a great favour, viz. go and nobble that picture called ''April Lov'' as soon as possible lest anybody else should buy it' (G. Burne-Jones, 'Memorials of Edward Burne-Jones', London 1904, I, p.132). At the end of his life Hughes still remembered Burne-Jones arriving at Upper Belgrave Place with Morris's cheque: 'My chief feeling then was surprise at an Oxford student buying pictures' ('Pall Mall Gazette', 13 July 1912). A pencil and wash sketch, 'Studies for April Love', is in the Tate Gallery (Tate Gallery T00276). Hughes also made a quarter-size replica in oil. Further reading: Leslie Parris (ed.), 'The Pre-Raphaelites', exhibition catalogue, Tate Gallery, London 1984, reprinted 1994, pp.137–138, reproduced in colour Leonard Roberts, introduction by Stephen Wildman, 'Arthur Hughes: His Life and Works, a Catalogue Raisonné', Woodbridge, Suffolk, Terry Riggs December 1997